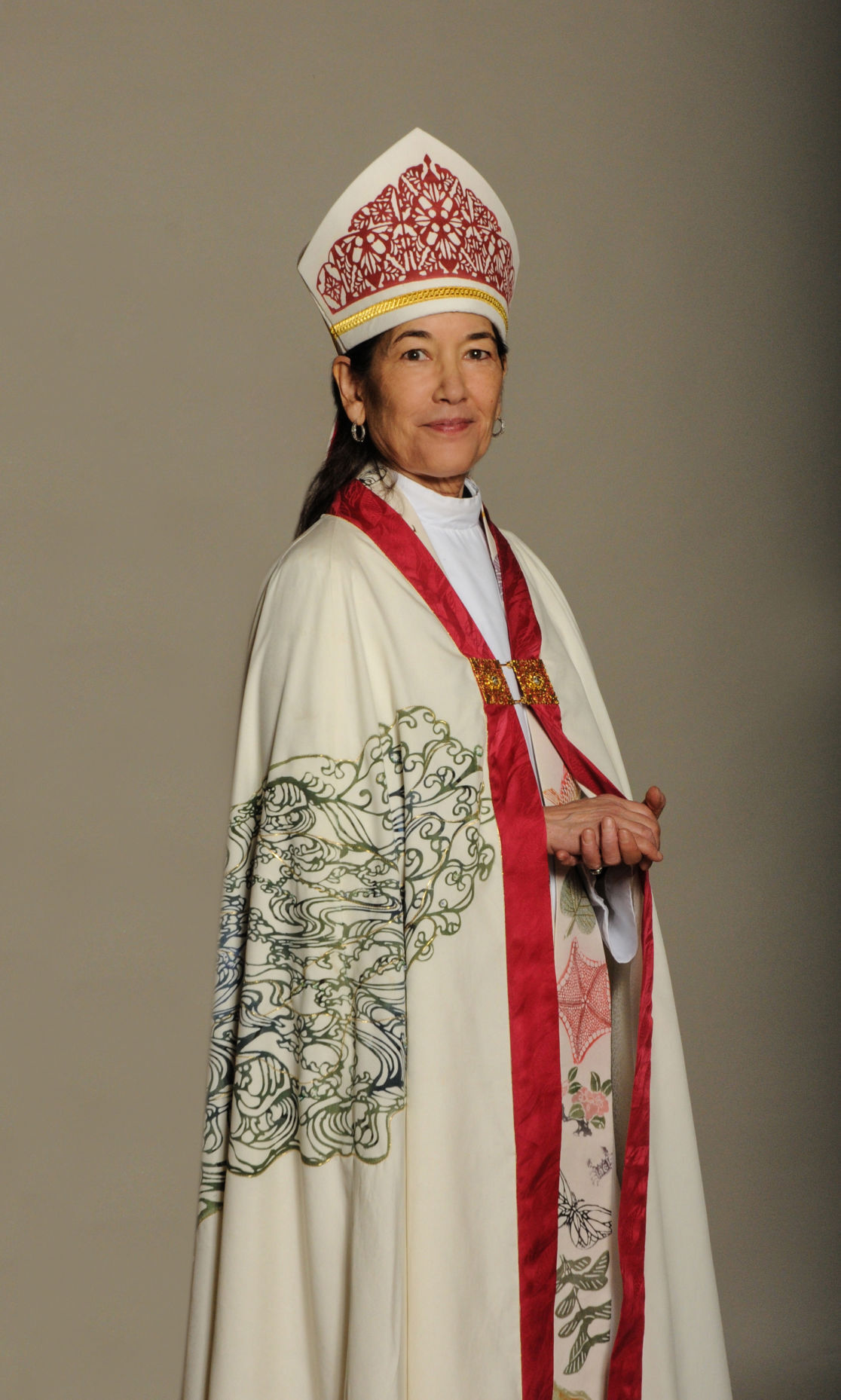 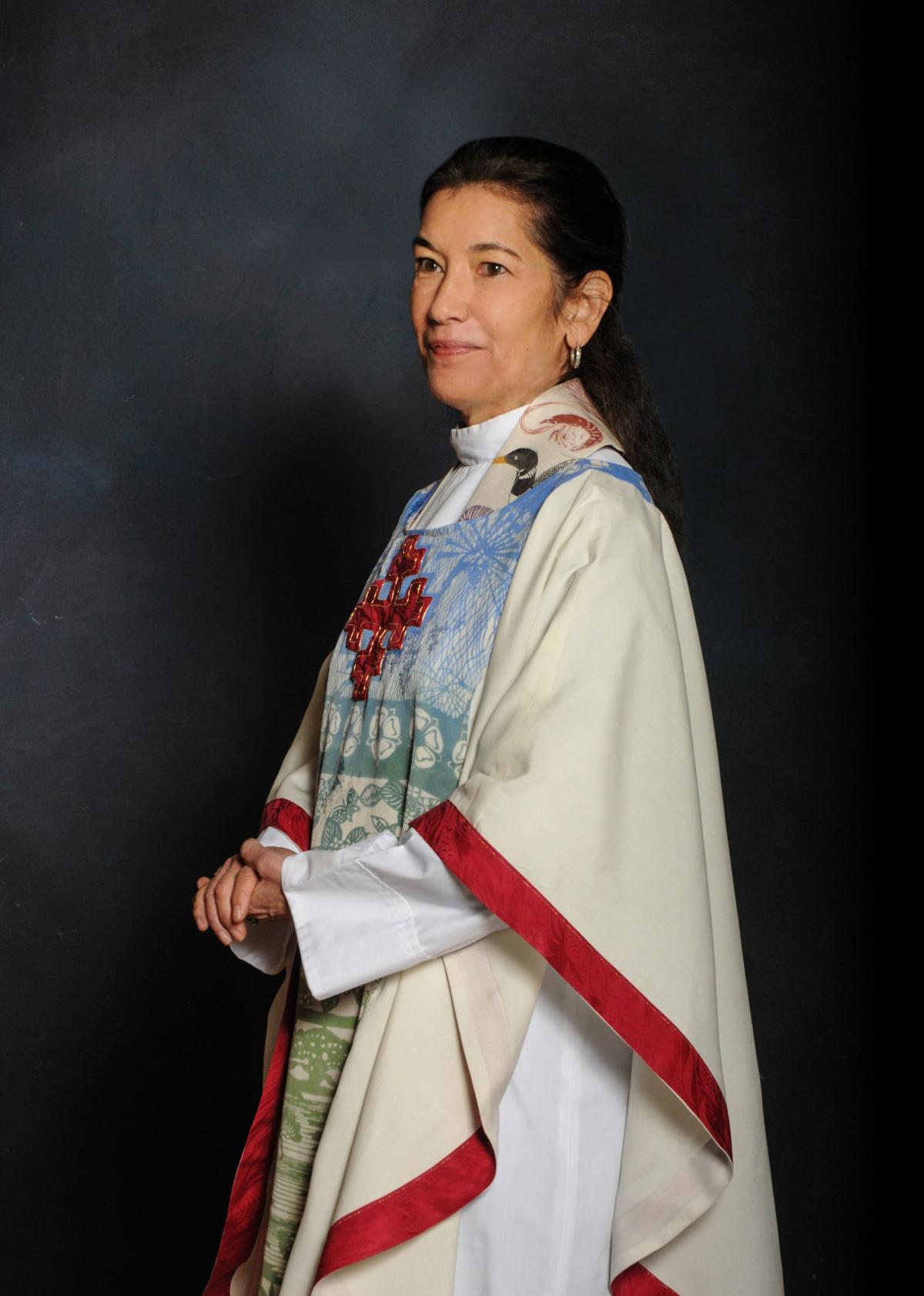 Akiyama wanted her vestmenst to reflect her Japanese heritage and love of the natural world. 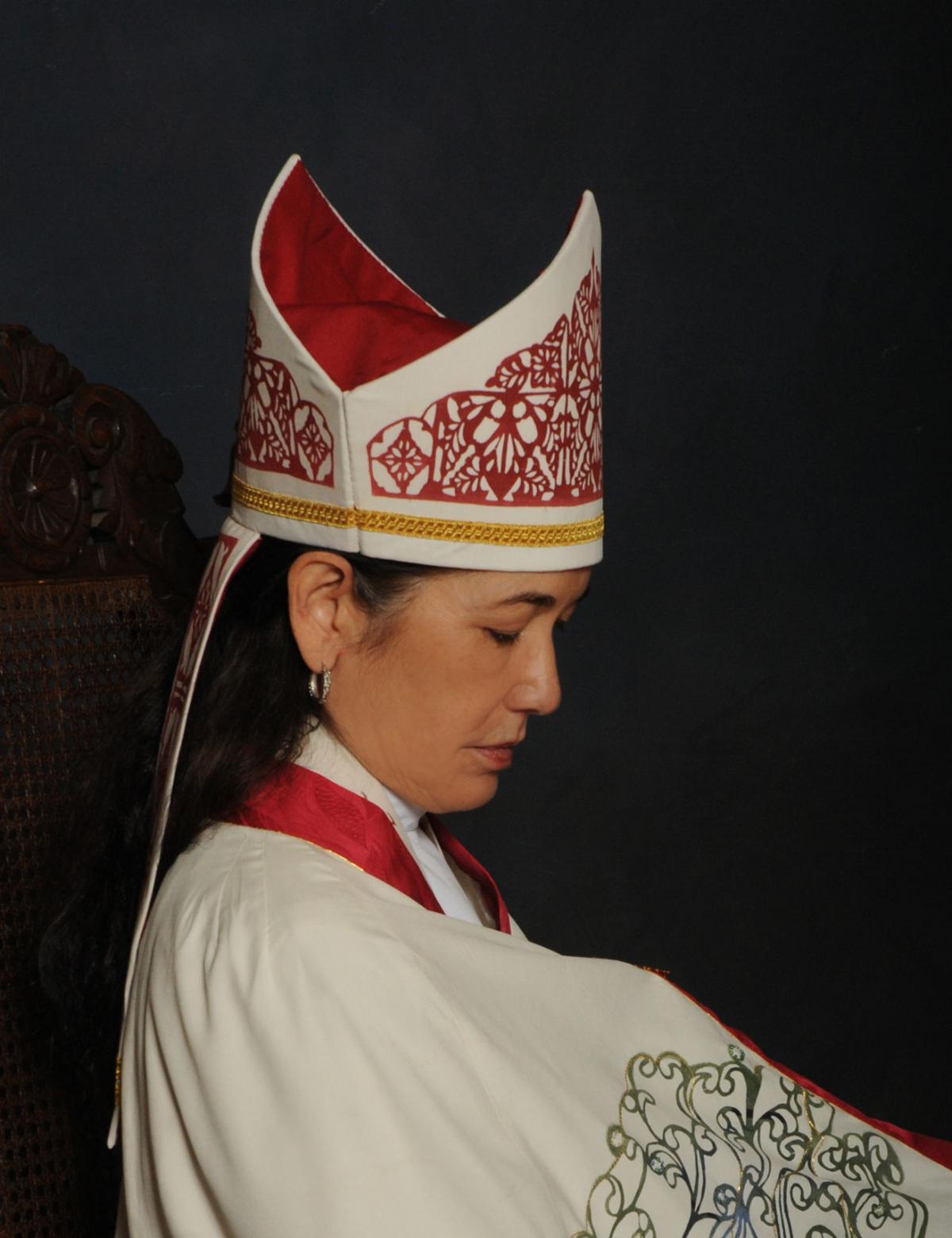 A closer look at the mitre worn by Akiyama for her consecration. 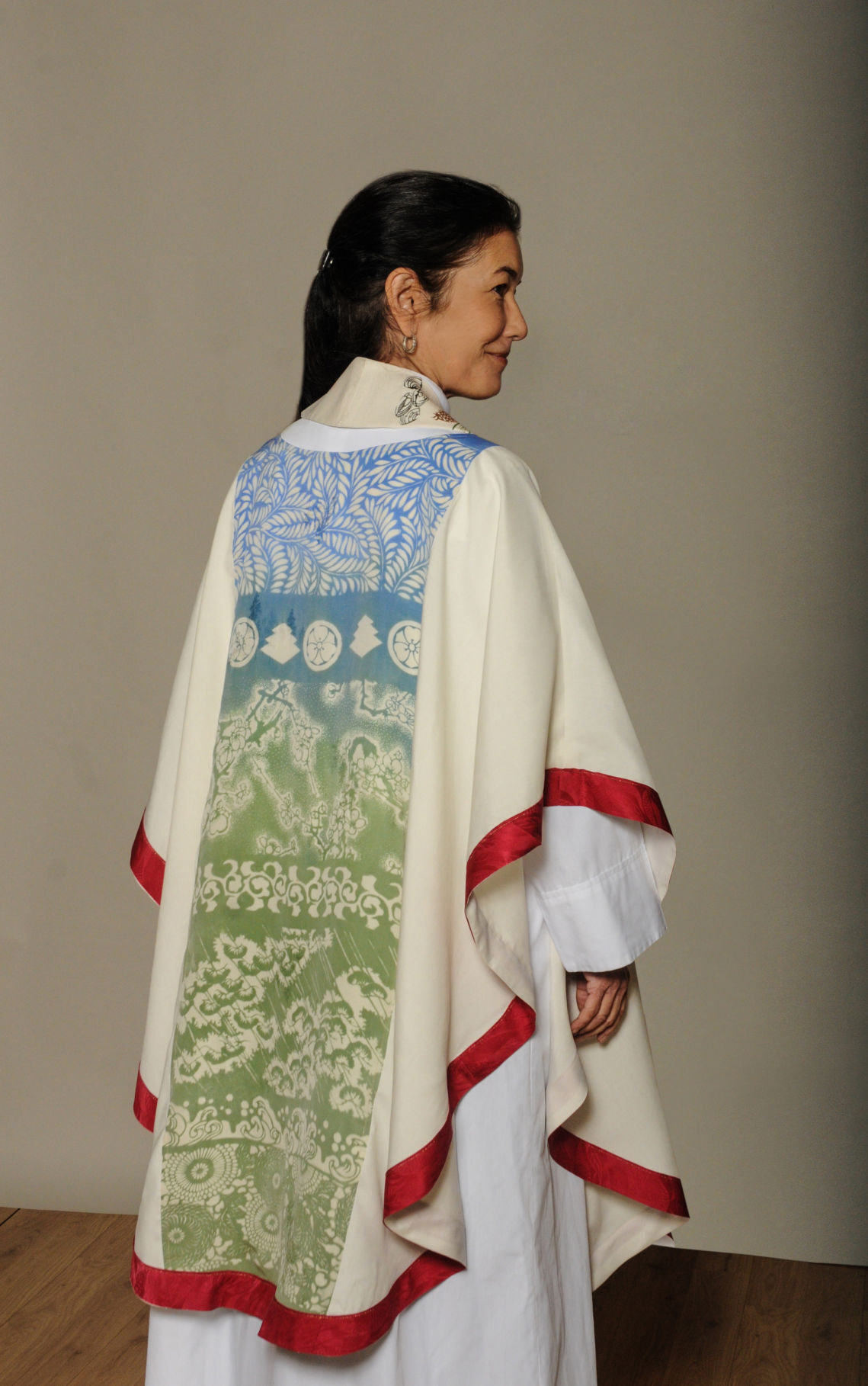 Miller worked closely with Akiyama to create vestments that fit the bishop's vision for the garments. 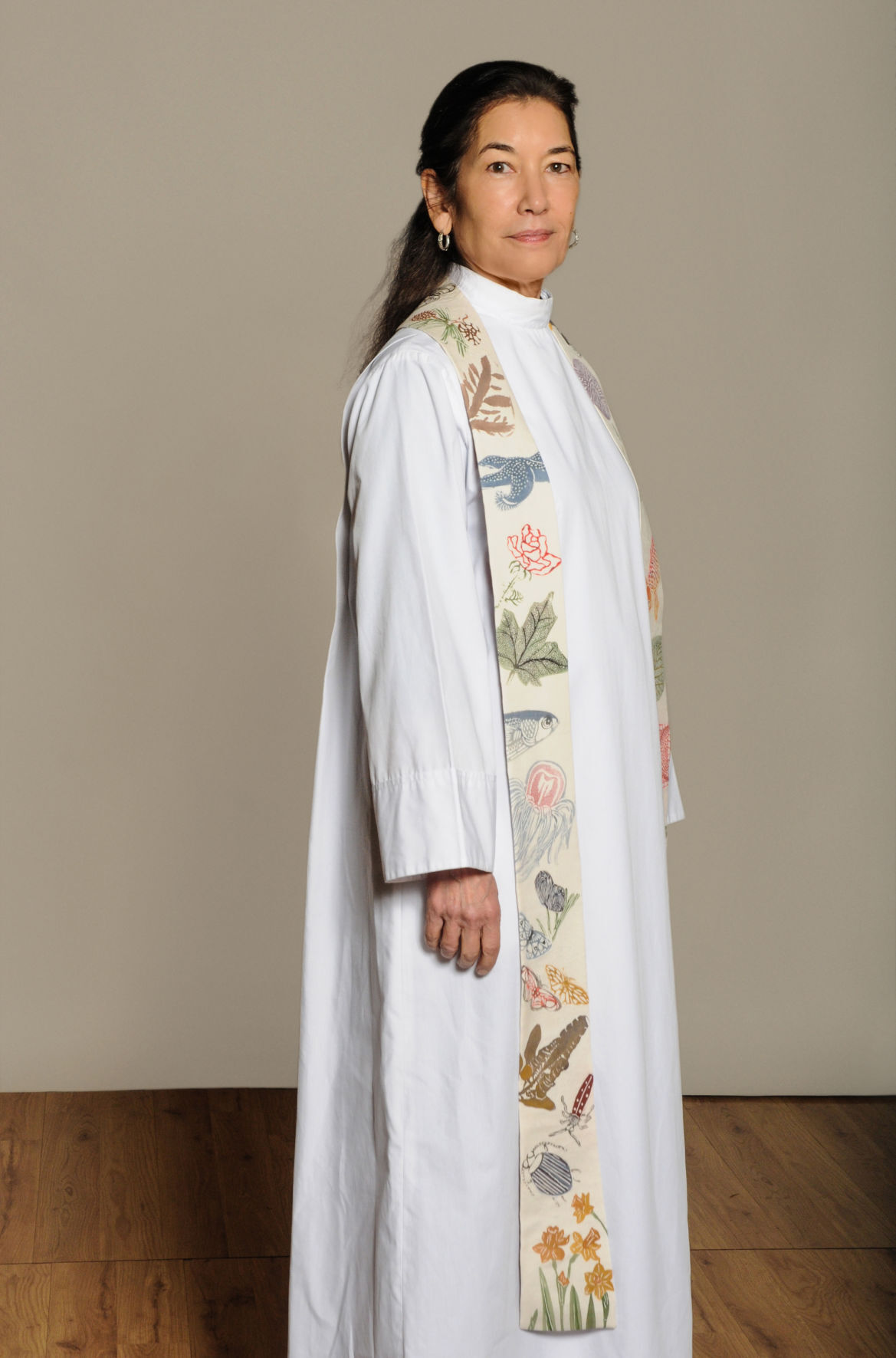 Akiyama was ordained and consecrated as the 11th bishop of the Episcopal Diocese of Oregon on Jan. 30

JENNIFER MOODY For the E

Thanks to the online consecration of Bishop Diana Akiyama, fiber artist Karen Miller of Corvallis is pretty sure just about every Episcopalian in the country has now seen her work.

She’s not sure yet whether that’s a good thing.

“It was absolutely the trickiest design and application process I have ever undertaken,” Miller said of the vestments she made for the newly-consecrated bishop.

Still, if asked, she might do it again — depending on the situation.

“All of that was a learning experience for me,” she added, “but I think she was just beyond thrilled with the results. And that really made me happy, that I was able to translate her vision into something she was comfortable wearing.”

The Rt. Rev. Diana Akiyama was ordained and consecrated as the 11th bishop of the Episcopal Diocese of Oregon on Jan. 30 in a ceremony live-streamed from Trinity Episcopal Cathedral in Portland.

As part of the consecration, Akiyama received vestments: ceremonial garments worn by members of the clergy. These included two stoles, one for her and one for a deacon; a sleeveless, poncho-shaped garment known as a chasuble; the traditional pointed head covering known as a mitre; and the broad cape that’s known as a cope.

Akiyama wanted her vestments to reflect both her Japanese heritage and her love of the natural world. Looking for a fiber artist, Akiyama’s sister went online and found Miller, who has more than 25 years of experience in the traditional Japanese art form of stencil dyeing known as katazome.

Katazome is a technique that involves spreading rice paste through a stencil, then applying a pigment dye — Miller uses one made with soymilk — which won’t stick to any of the areas covered by the paste.

Miller belongs to the United Church of Christ and had never made Episcopal vestments before. But her decades of experience in katazome and in making garments — along with her background as a marine biologist — caught Akiyama’s attention.

“I had been looking for a designer in the local area and was delighted to discover a katazome artist in Corvallis,” Akiyama wrote in an email interview. “Karen is a master of this art and I quickly realized that she was very accomplished. Knowing this made it easy to trust her judgment about what she could and couldn’t do in terms of translating her art onto the vestments I was needing.”

“We made the vast majority of our decisions together,” Akiyama wrote. “She would ask what my parameters were and I would tell her what the ‘must haves’ were and what other details were up to us to determine.”

The stoles were made with stencils Miller already had. The images include a sea urchin, sea star, pinecone, jellyfish, gulls, kelp, carp, a rose, trillium and clams, reflecting the living things that are precious to Miller as a marine biologist and to Akiyama for her love of nature and of the ocean.

For the chasuble, the two chose white Japanese kimono silk for the center panel, dyed with traditional Japanese patterns, including her family crests and the rose from the shield of the Episcopal Diocese.

The mitre presented a challenge. Miller had never made one, but Akiyama had been given one by a former bishop and let Miller take it apart to see how it was constructed inside. “We designed a stencil based on a latticework gate at a Japanese temple in Kyoto,” she said.

Akiyama remembered Miller being nervous about the mitre, especially knowing the complexity of the construction.

“When she handed me the finished mitre to try on, I placed it on my head and turned to her and said, ‘It’s perfect!’ She said, ‘YES!’ and looked so happy and relieved,” Akiyama recalled.

Then came the cope, which Miller called the most demanding piece of all.

“Because I had many years of experience doing that sort of thing (garment construction), I was pretty thoroughly convinced that I could do this project,” Miller said.

She was right. But it took every skill she had.

Akiyama had a water-like swirl in mind, a design that would flow in curving waves from near the hem, bottom left, up to the shoulder, top right. She wanted that done in katazome stenciling.

Katazome is used to make kimono fabric, Miller said, which is 14 inches wide and comes in long rolls. The paper stencils, which are hand-cut, typically march in a straight line down this narrow fabric.

“What she wanted was a big curve, and it was going to go across six wedge-shaped pieces to make a huge half-circle garment. Aaaahhhhh!” MIller exclaimed. “That was not a traditional Japanese approach to designing things.”

Miller hand-cut each stencil from scratch to make the flowing design, but crafting and then fitting the stencils together to create the pattern was just one part of the challenge.

“It was a very tricky matching project,” Miller said.

Because the fabric pieces were wedge-shaped, the seams were on the bias — against the grain of the fabric — and that meant gravity would stretch them, distorting the design and affecting the length.

So Miller clamped lead fishing weights to the cope and let it hang for a couple of days, then took the weights off and marked the hem, put a temporary hem in and let it settle before Akiyama tried it on.

She also had to be very careful with the paste, planning an application sequence from one piece to the next to mark the exact shape of the curve and where the seams were going to be once they’d stretched.

“It was just challenging. After two or three weeks of planning and drawing of diagrams, it took me six hours of hold-your-breath pasting to do the pasting, to put the paste on,” Miller said.

Next, she had to delicately correct any place the paste didn’t connect, so you couldn’t see the joints.

“Then when you get it dyed, have to go in again and delicately correct where dye lines aren’t correct. There’s a tremendous amount of fine tuning,” she said.

The collaboration was helped, Miller added, by the fact that Akiyama is an accomplished seamstress herself.

“I wasn’t having to explain the technical aspect. I wasn’t speaking a strange language to her when I was putting it together,” Miller said. “Not like some man who doesn’t even know how to put a button on.”

Both she and Akiyama were delighted with the outcome, however.

“When I put on the finished cope, I knew that it was the perfect design for me. It was light with a supple drape and had a feel and look that reflected my aesthetic,” Akiyama wrote. “The symbolism also was exactly what I had hoped for.”

“She wanted it to be very very fluid and it was,” Miller agreed. “Watched her exiting the church and the thing just flowed around her, it was like water, it was beautiful, the way it moves.”

All of the pieces were beautiful, Akiyama added.

“The first piece that was finished was the celebrant’s stole. I arrived at her home for one of our sessions and she had laid out the stole on a chair. I asked if this was the finished stole and when she said, ‘Yes!’ I picked it up and was so overwhelmed by the beauty and detail that I began to weep.

“This has pretty much been my response to each piece that she finished,” she went on. “It’s amazing what she was able to accomplish given that she’s never made vestments like this before."

Miller hurried back from a granddaughter’s second birthday party to watch the live-streamed ceremony. She would have been in the audience were it not for the COVID-19 restrictions in place at the cathedral.

“I wouldn’t have missed it for the world,” she said. “I hope someday she will come to Corvallis and officiate at a church here and I could come see her at a service.”

Akiyama said she will. “Absolutely. I will wear them whenever I am visiting a congregation to celebrate eucharist, to confirm, etc.”

Rooster will appear in court after killing owner during illegal cockfight

Rooster will appear in court after killing owner during illegal cockfight

Akiyama wanted her vestmenst to reflect her Japanese heritage and love of the natural world.

A closer look at the mitre worn by Akiyama for her consecration.

Miller worked closely with Akiyama to create vestments that fit the bishop's vision for the garments.

Akiyama was ordained and consecrated as the 11th bishop of the Episcopal Diocese of Oregon on Jan. 30