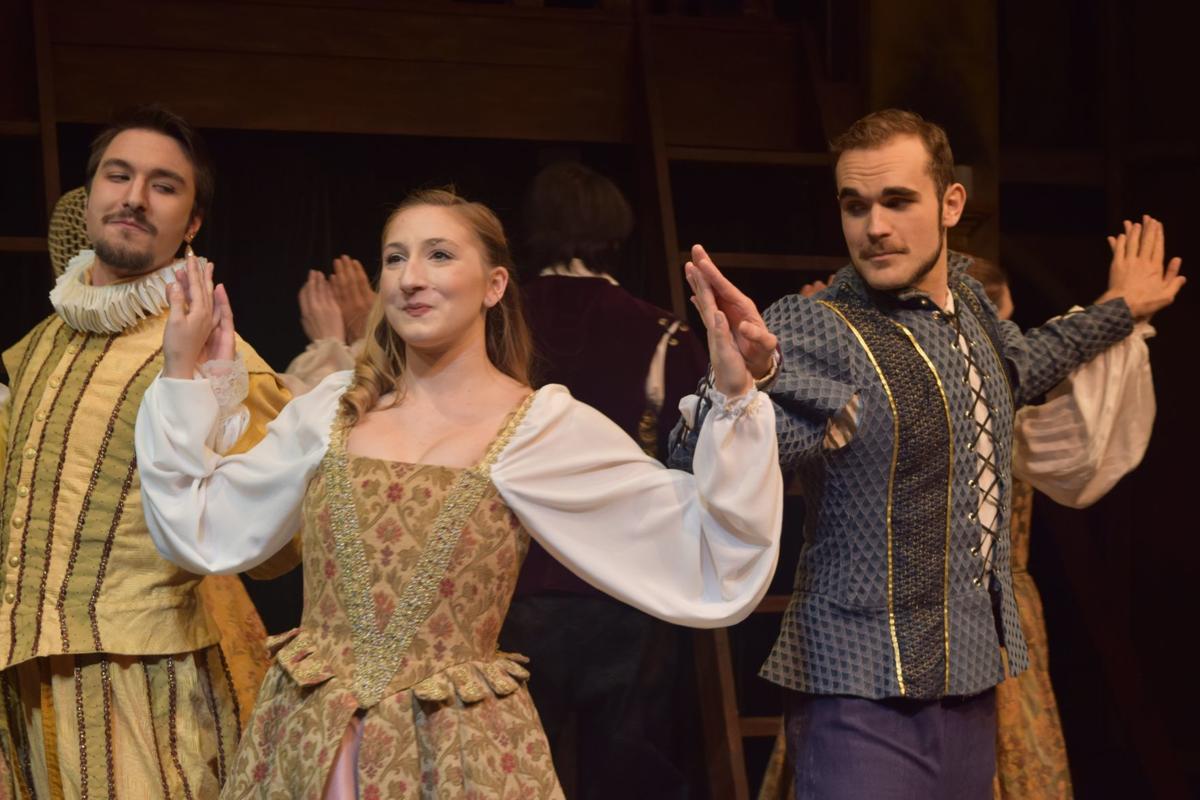 The lovers meet: Josh Smith (Wessex), Alessandra Ferriso (Viola) and Thomas R. McKean (Will) share a scene in the Oregon State University production of "Shakespeare in Love." The show opens Thursday at OSU. 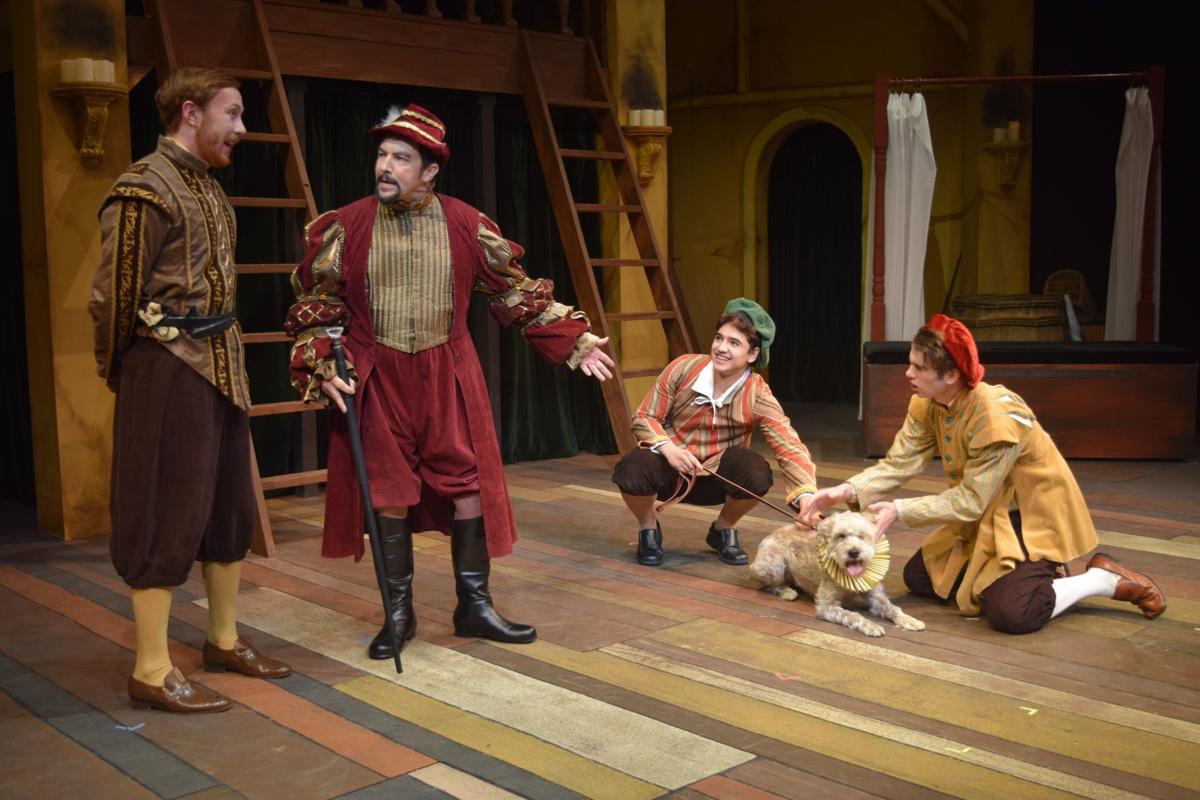 Actors in "Shakespeare in Love" learn why they never should share the stage with an animal. From the left: Noah Fox (Burbage), Shawn Bookey (Tilney), Kian Mitchell (Nol), Wheatley (Spot) and Austin DuFrene (Peter). 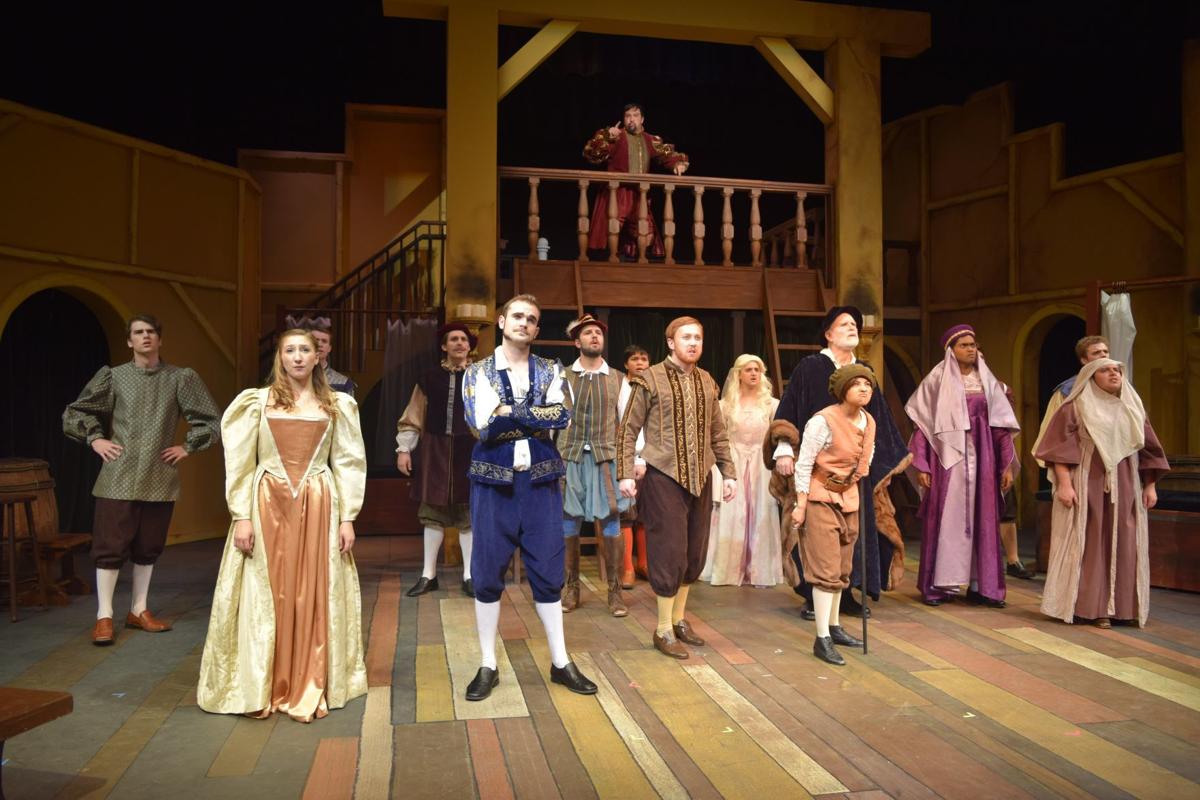 Tilney (Shawn Bookey) confronts the cast in this scene from "Shakespeare in Love."

The theme for this year's theater season at Oregon State University is "The Undeniable Truth," and Elizabeth Helman, who's directing the OSU production of "Shakespeare in Love," says the show fits nicely under that umbrella.

"It's a show that explores hidden secrets and unspoken truths," Helman said — just like so many of Shakespeare's plays.

"Shakespeare in Love" also follows the advice one of its characters offers about what audiences want from the theater: "You see — comedy. Love, and a bit with a dog. That's what they want."

But here's one undeniable truth about Lee Hall's stage adaptation of the Oscar-winning screenplay by Marc Norman and Tom Stoppard: It's an unabashed, full-throated celebration of theater. "This focuses a lot more on the joy of making theater and the frustrations of making theater," Helman said.

The OSU production opens Thursday night at OSU's Withycombe Hall Main Stage and runs through Nov. 24. (See the box for details about performance times and tickets.)

Of course, Helman said, Hall's adaptation generally hews to the contours of Norman and Stoppard's original script, which is set in 1592 and depicts a young William Shakespeare (Thomas R. McKean) as a playwright suffering from a severe case of writer's block. He's struggling to write the play that will become "Romeo and Juliet." (The draft that the Bard-to-be is working on as "Shakespeare in Love" begins is called "Romeo and Ethel, the Pirate's Daughter.")

But that writer's block begins to subside when he meets the charming Viola DeLesseps (Alessandra Ferriso), the daughter of a wealthy merchant — and someone who harbors dreams of her own to become an actor.

In some ways, Helman has been laying the foundation for this production of "Shakespeare in Love" for a couple of seasons: OSU recently staged Stoppard's early hit "Rosencrantz and Guildenstern are Dead," with its Shakespearean backdrop and Stoppard's dense and witty dialogue.

And, Helman said, about half of the cast of "Shakespeare" was featured in this summer's Bard in the Quad production of "Romeo and Juliet," a play which features prominently in the action of "Shakespeare in Love."

But, she said, the play has another theme that resonates with the students in her cast: "It's a play about young people at a crossroads and deciding how to make a mark on the world. That's a fun thing to explore."

To that end, the play captures Shakespeare at a point before he becomes the famous Bard: "He didn't set out to the famous," Helman said. "He just wanted to make plays."

Hall's adaptation also finds space to offer more insight into Viola's character: "We get to see a lot more of her inner life in this," Helman said.

With 22 members in the cast, music, stage fights, and elaborate costumes created by DeMara Cabrera, "Shakespeare in Love" "is actually the biggest show with the most pieces that we've done," Helman said — and it's come together on a tight five-week rehearsal schedule: "This show is hard," she said. "It's like doing a Shakespeare musical."

But her cast and crew are rallying to the cause, she said. "It's a fun play and they're having a good time with it. It's challenging and it keeps them on their toes."

And as for that bit with the dog: Helman said both of her dogs are featured in the show. Another dog auditioned, but that pooch wasn't right for the part: "The other dog was too well-behaved."

HOW MUCH: Ticket are $15 for general admission, $12 for seniors, $10 for youths and students and $5 for OSU students. Tickets are available through the OSU Theatre box office at 541-737-2784 or online at https://beavs.es/ZEw

The lovers meet: Josh Smith (Wessex), Alessandra Ferriso (Viola) and Thomas R. McKean (Will) share a scene in the Oregon State University production of "Shakespeare in Love." The show opens Thursday at OSU.

Actors in "Shakespeare in Love" learn why they never should share the stage with an animal. From the left: Noah Fox (Burbage), Shawn Bookey (Tilney), Kian Mitchell (Nol), Wheatley (Spot) and Austin DuFrene (Peter).

Tilney (Shawn Bookey) confronts the cast in this scene from "Shakespeare in Love."