In honor of Independence Day, Democrat-Herald is providing unlimited access to all of our content from June 28th-July 4th! Presented by Western Interlock 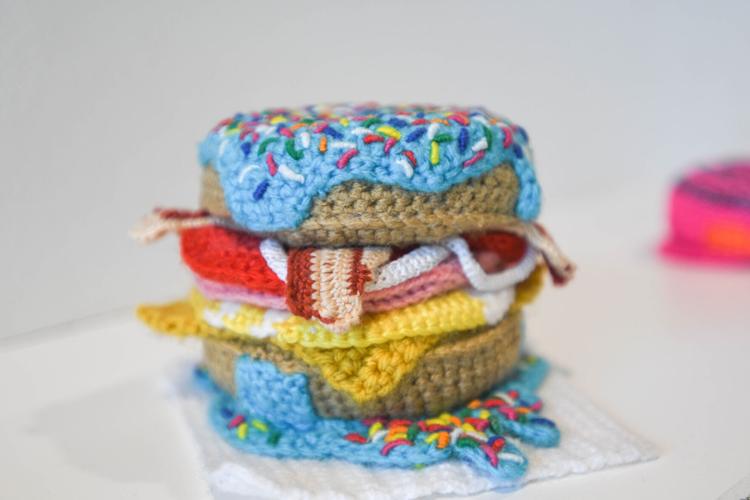 Owen Premore said he has been crocheting since he was a child. 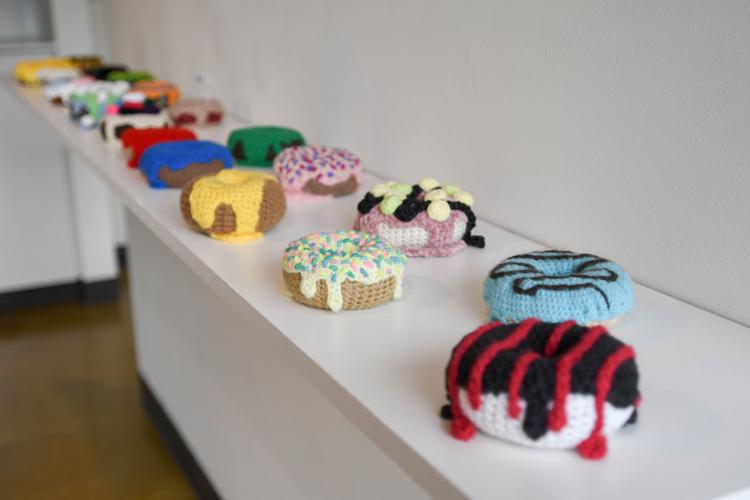 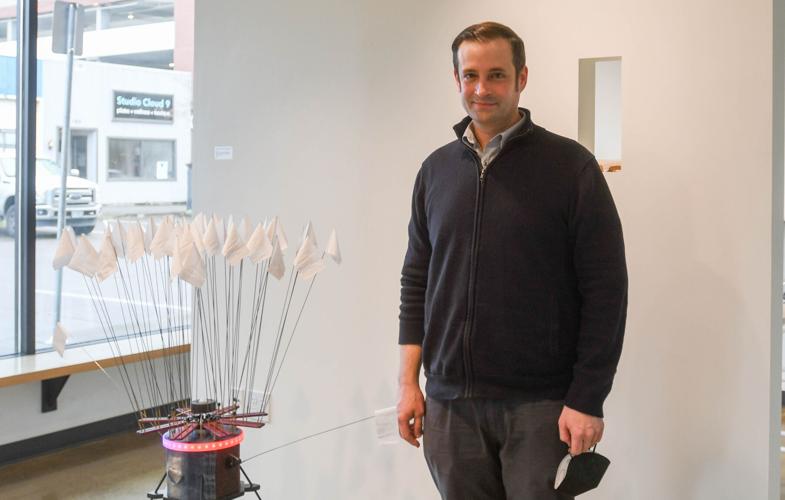 Owen Premore creates interactive and crocheted art that is currently being shown at Joan Truckenbrod's gallery in downtown Corvallis. 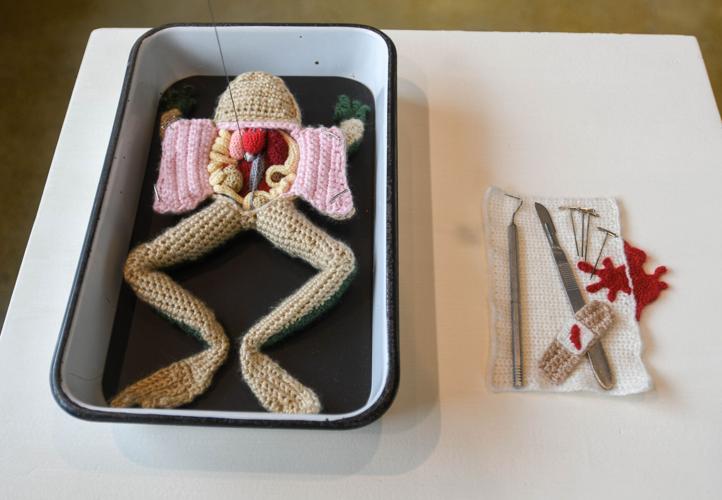 Premore uses salvaged materials to create his artwork. The dissection case here was purchased at the OSUsed surplus store. 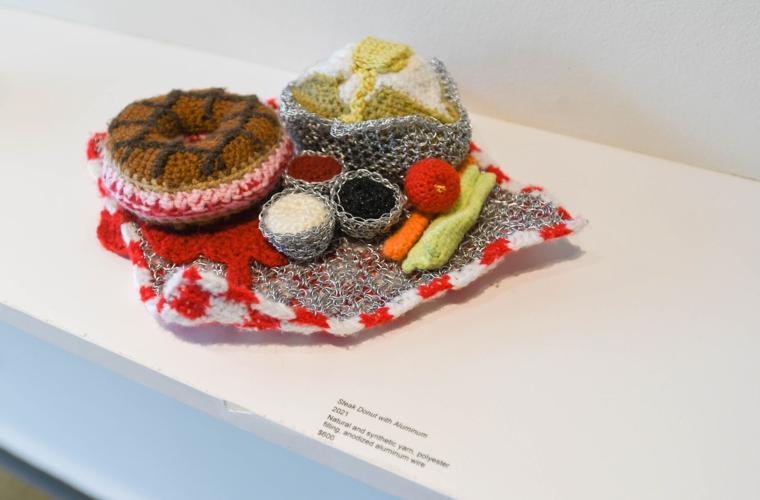 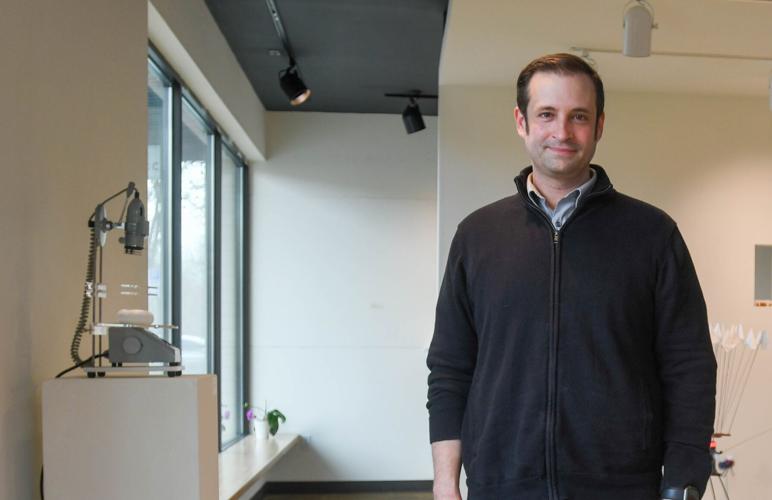 Owen Premore is breaking down the stigma that men do not belong in fiber arts.

He combines his passions for crochet and interactive installations to create unique artwork that wouldn’t normally come to mind when one thinks of the word “art,” including a series of intricately crafted crocheted donuts, pandemic-inspired steel installations and even a crocheted dissected frog.

“I like to combine the two, the hard and the soft,” Premore said. “Men still get tripped up by the crochet work — it’s still a stigma for fiber arts and masculinity. Combining those two is a way to break that down.”

Premore is the directing curator of “Art About Agriculture,” presented by the College of Agricultural Sciences at Oregon State University. He tries to reuse materials as much as possible in his artwork, and gets most of his supplies from the university’s surplus store, OSUsed.

Premore’s grandmother taught him to crochet when he was 7 years old, and he began incorporating other art forms into the practice while he was studying spatial art at San Jose State University.

Premore used to work as an exhibit repair maintenance technician for the Oregon Museum of Science and Industry, and would travel for several weeks at a time. He crocheted for hours at a time in hotels, and started making the donuts as gifts for technicians on the road.

“It was a way for me to keep making objects,” he remembered. “The colors and textiles in crochet are amazing. It’s hard to match.”

Premore even dabbled in crocheted cupcakes but said that was much harder to do than donuts. He does not use patterns but rather plans out each piece as he works on it.

“It gives people a chance to laugh and reflect, but humor often has a deeper meaning,” he said. “Having an opportunity to showcase experimental art like this is so valuable.”

Premore’s artwork will be on display at the Truckenbrod Gallery, 517 SW Second St., for the Corvallis Art Walk from 4 to 8 p.m. Thursday, March 17. The gallery is also open 1 to 4 p.m. Fridays and Saturdays.

Joan Truckenbrod, who opened the gallery about three years ago, said she is excited to showcase Premore’s work because she is always thinking of ways to engage and educate the community.

“I enjoy introducing people to things they may not consider as art,” Truckenbrod said. “And that inspires them to make things themselves.”

See more photos of Owen Premore's crochet work at the online version of this story at gazettetimes.com or democratherald.com.

The 650-person town of Monroe opened its first arts association to the public in November, a creative hub that supports 27 rural artists from …

"You & Me in the Trees" is Philomath author Amoris Walker’s love letter to her family and the great Oregon outdoors.

It wasn't easy to find a business owner willing to host the mural. Here's where it landed.

The big reveal at Bombs Away Café is tonight.

Julie Green — artist, teacher, human, friend — spent their life honoring the lives of others through art.

Medical supplies to travel from Corvallis to Ukraine

When you’re wounded and desperate, you don’t care about the expiration date on the medical supplies keeping you alive.

Corvallis actor, activist says he is no 'cookie-cutter' candidate for Congress

Jake Matthews is one of three candidates for Congress from Corvallis on the May 17 primary ballot this year.

Albany actors back on stage for "Clue"

Albany Civic Theater is producing “Clue” this April for both in-person and virtual audiences.

An upswing in COVID-19 cases in Oregon is expected to hit this week, driven by infections of the hyper-contagious BA.2 version of the omicron …

There were 39 new COVID-19-related deaths and 541 new cases reported for the three-day period between Friday and Sunday, according to Oregon H…

Corvallis School District Theaters is picking up where its left off two years ago with a revival of “Mamma Mia!”

ArtsCare puts out call to veterans

The Arts Center in Corvallis and Samaritan Health Services are seeking photographs from military veterans for an upcoming photo exhibit, “Thro…

Owen Premore said he has been crocheting since he was a child.

Owen Premore creates interactive and crocheted art that is currently being shown at Joan Truckenbrod's gallery in downtown Corvallis.

Premore uses salvaged materials to create his artwork. The dissection case here was purchased at the OSUsed surplus store.