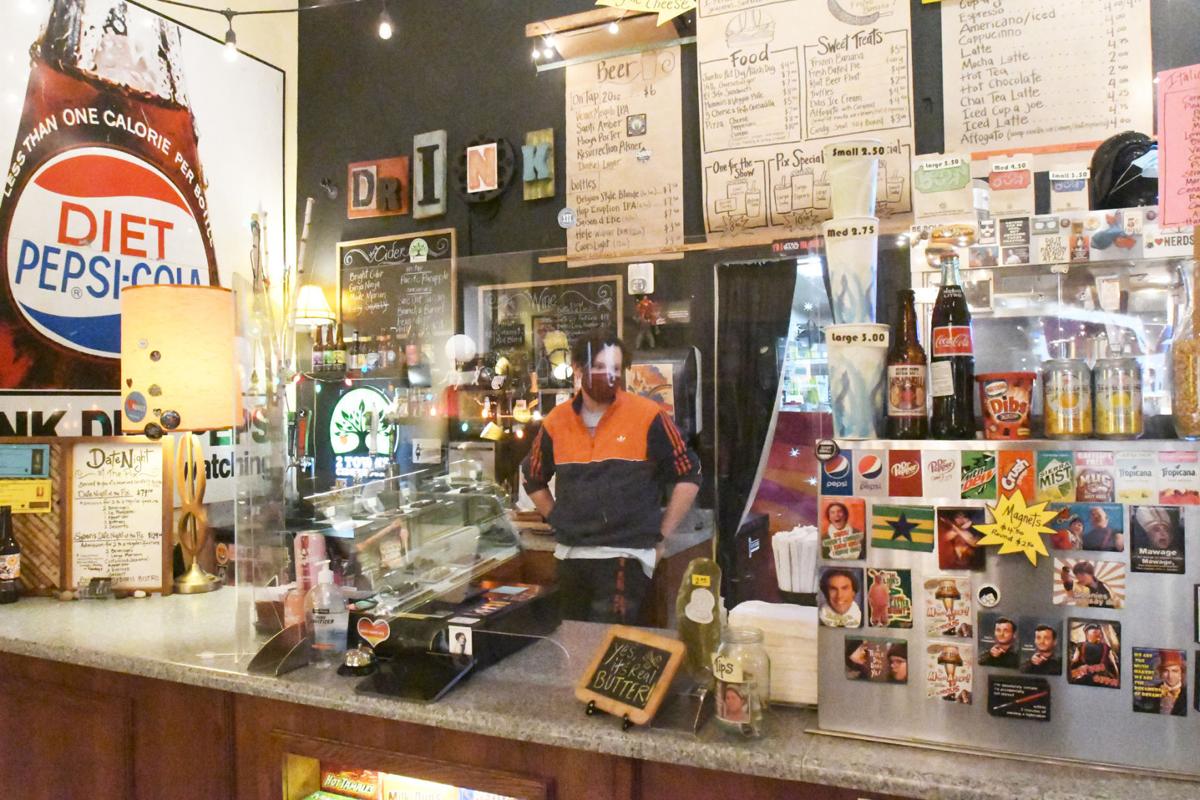 Harper Johnson works the concession counter at Albany's Pix Theatre, which reopened in July under COVID-19 safety protocols. "We are cleaning a lot more and it's slower, but there's a lot more space," Johnson says. 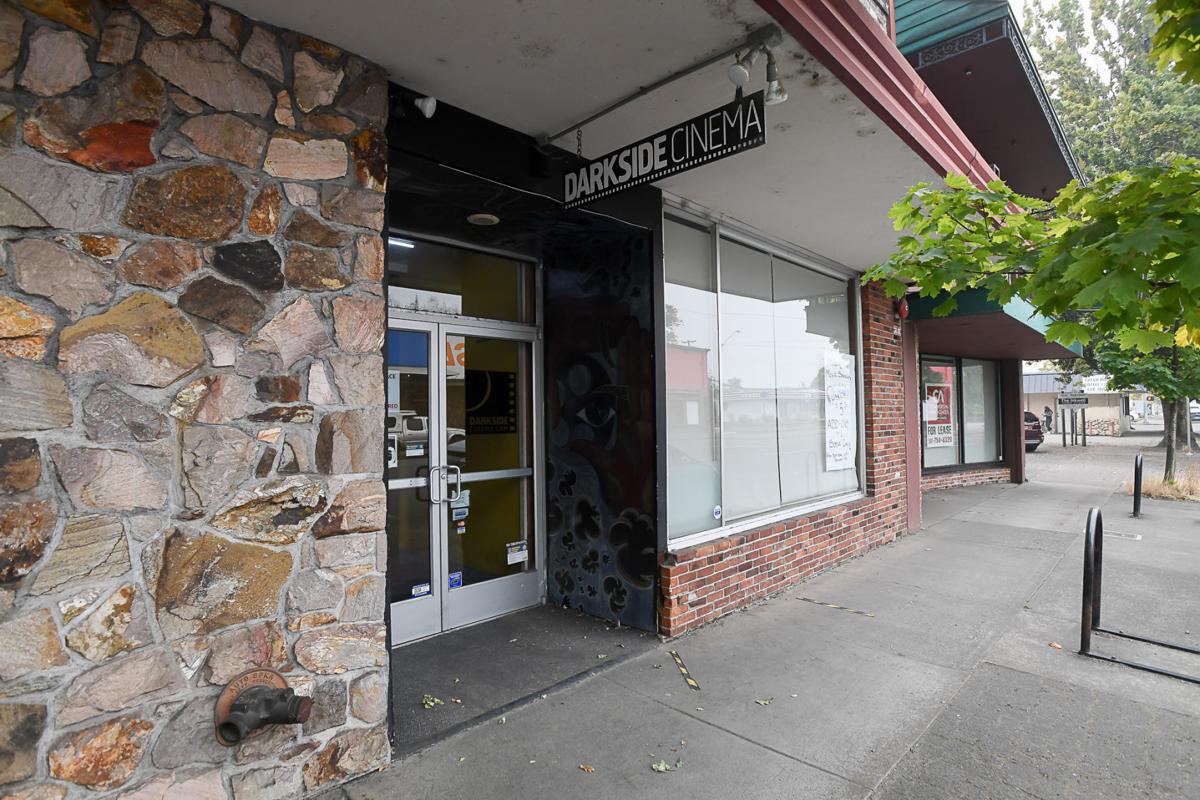 The Darkside Cinema in downtown Corvallis has been closed to moviegoers since March but has been streaming movies for rent on its website. Owner Paul Turner says he's playing "the long game" to survive the pandemic. 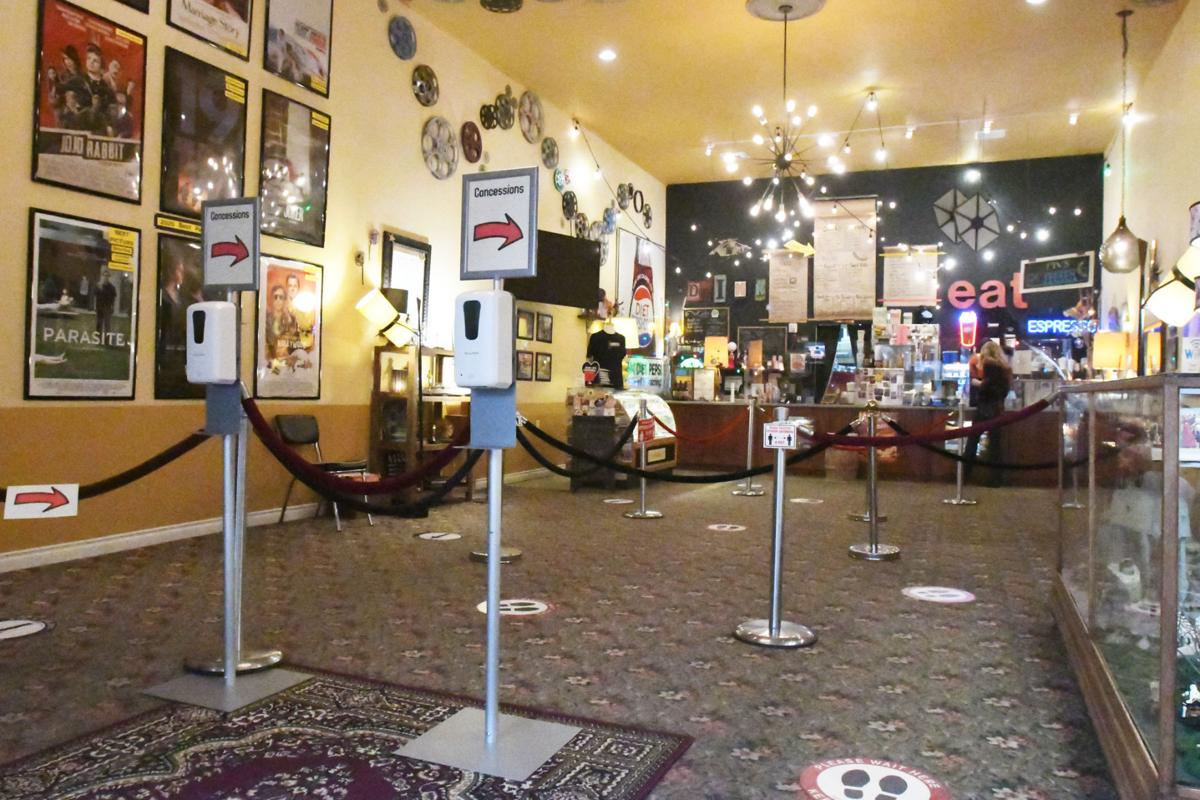 The Pix Theatre has put up hand sanitizer stations and has placed partitions in the lobby to help control the flow of customers. 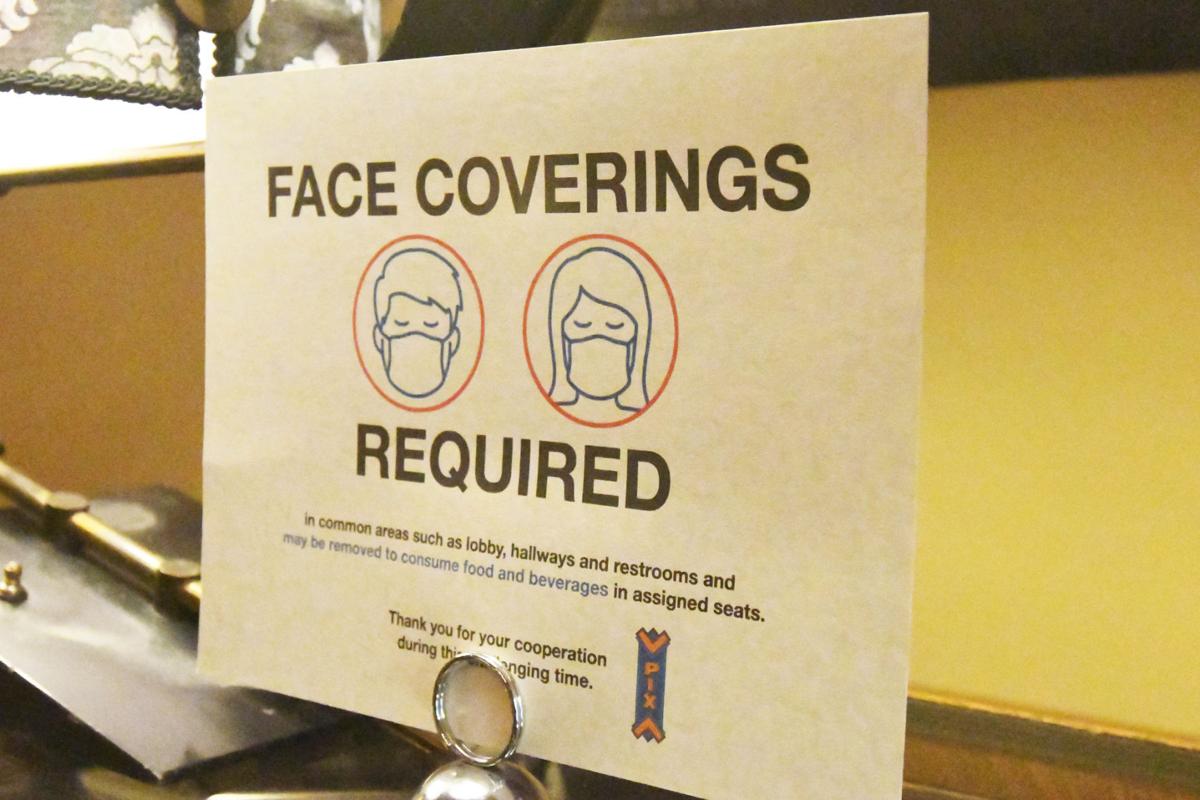 Masks are required inside the Pix. 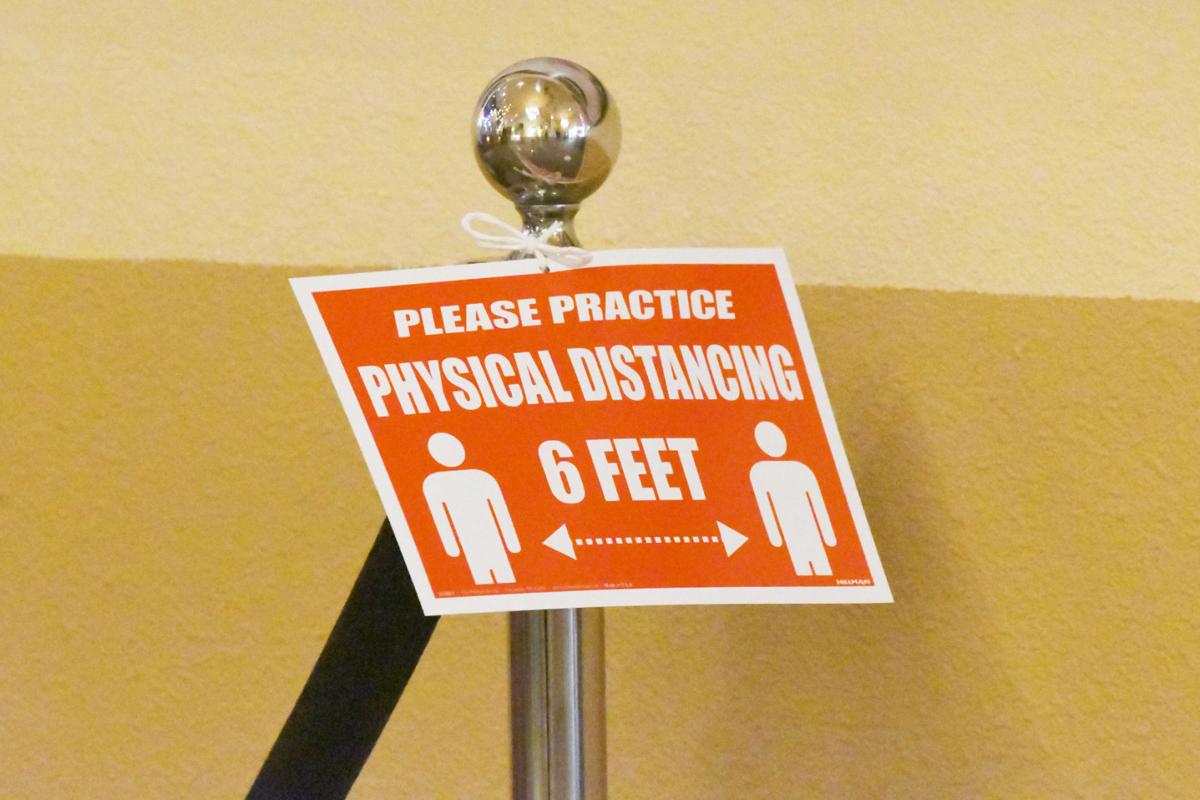 Social distancing protocols are posted inside the Pix Theatre.

The Pix Theatre used to have a capacity of 180 seats.

With social distancing protocols brought on by the coronavirus, it now maxes out at about 45.

Darkside Cinema’s auditoriums are too small to allow for a profit to be made while following such guidelines, and thus will stay closed to general admission visitors until it can viably reopen.

Area movie theater owners and operators are in the same situation as others in business during the pandemic, dealing with factors that are beyond their control as they try to reopen their doors and keep them open.

“We’re just trying to do all we can to make it as safe as possible,” said Rod Bigner, who owns downtown Albany’s Pix with his wife, Denise.

The Pix invited guests back in on July 3 after being closed for more than three months. It’s been a tough go for the Bigners, who have a long list of changes they’ve made.

They installed an air purifier in the heating and cooling system that follows guidelines created by CinemaSafe, a popular new national program promoting rules developed by leading epidemiologists to support a safe return to theaters. The air system is tested and certified to work against COVID-19.

Furniture in the Pix’s lobby has been removed to make room for social distancing in the concession line. One isolated table remains for food consumption.

Inside the auditorium, every other row of seating has been removed. Every group of moviegoers is separated by at least three seats. New ticketing hardware was purchased to make the transition.

Several hand sanitizing stations are available. Masks are required in the building and may only be removed while consuming food and beverages in your seat.

“When you think about going to a theater during COVID, your mind just automatically thinks of a crowded theater, and it seems very dangerous,” Denise Bigner said. “But what we found, because of everything we’ve done, when people actually come in and see a movie and sit in the theater, they often leave saying, 'Wow, you guys have really made it feel safe here.’”

She added that those positive reactions translate into repeat business, with the same loyal and supportive customers returning when another film is offered.

Paul Turner, who opened the Darkside in downtown Corvallis in 2005, said his business is playing what he calls the “long game” in an effort to remain viable.

He’s confident the Darkside will come through the pandemic, noting that the business has had other, more difficult rough patches.

The theater, which has had limited success renting streamed movies from its website, has received a shot in the arm from generous donors. Like other businesses in the area, the Darkside is asking for financial help on its website.

“People have shown a lot of faith in what we’re doing,” Turner said. “The best way for us to honor that is to play the long game like we always have.”

He says everything he and his staff have done trying to get the doors open will help them prepare for what he expects will be another disruption of business at some point.

But Turner isn’t rushing to host movies for public viewing.

To create some income, the Darkside is selling T-shirts, popcorn and treats at the theater. Strict cleaning procedures are in place, and maintaining social distancing between employees and customers is a priority. Turner has applied for government assistance, an effort he hopes finds traction soon.

Since it was last open to show movies, the business has a new entrance door and flooring, along with renovated restrooms. Turner plans to install Plexiglas at the snack bar counter, which will allow for private screenings.

If there’s a positive in all of this, Turner said, it was that he learned he has a strong HVAC system after wildfire smoke arrived in the mid-valley last week. He had concerns that thousands of dollars in upgrades would be needed.

For Rod Bigner at the Pix, reopening was a positive sign because at least the theater was producing a little income.

One of the biggest hurdles since returning has been the lack of new product from motion picture studios, which also shut down at the start of the pandemic.

It wasn’t until the last week of August that the Pix was able to show a recent release. Before that, it was all retro content, which makes it difficult to routinely fill seats.

“So you combine the lack of new content with people’s lack of comfort and our limitations, it’s suppressed business quite a bit,” Rod Bigner said.

The goal is to survive 2020 and see what happens going forward. Survival, Bigner believes, will have a lot to do with the course of the virus and how soon customer confidence and higher capacities are restored.

Turner says cinemas have generally operated in the same fashion for the past 100 years. But that’s going to change, and he isn’t sure what it’s going to look like.

He’s confident his business will survive because he has a good staff, a supportive community, an “awesome” landlord and a solid relationship with the city of Corvallis.

“Cinema 2.0,” as Turner describes it, will be different, and he’s ready for whatever is next.

“Cinemas have always been a cultural bonfire. They’ve been the thing that people have gathered around,” he said. “Whatever it takes, we’re going to make that work.”

Movie fanatics will not be able to have a traditional theater experience anytime soon and Paul Turner knows that.

Harper Johnson works the concession counter at Albany's Pix Theatre, which reopened in July under COVID-19 safety protocols. "We are cleaning a lot more and it's slower, but there's a lot more space," Johnson says.

The Darkside Cinema in downtown Corvallis has been closed to moviegoers since March but has been streaming movies for rent on its website. Owner Paul Turner says he's playing "the long game" to survive the pandemic.

The Pix Theatre has put up hand sanitizer stations and has placed partitions in the lobby to help control the flow of customers.

Masks are required inside the Pix.

Social distancing protocols are posted inside the Pix Theatre.