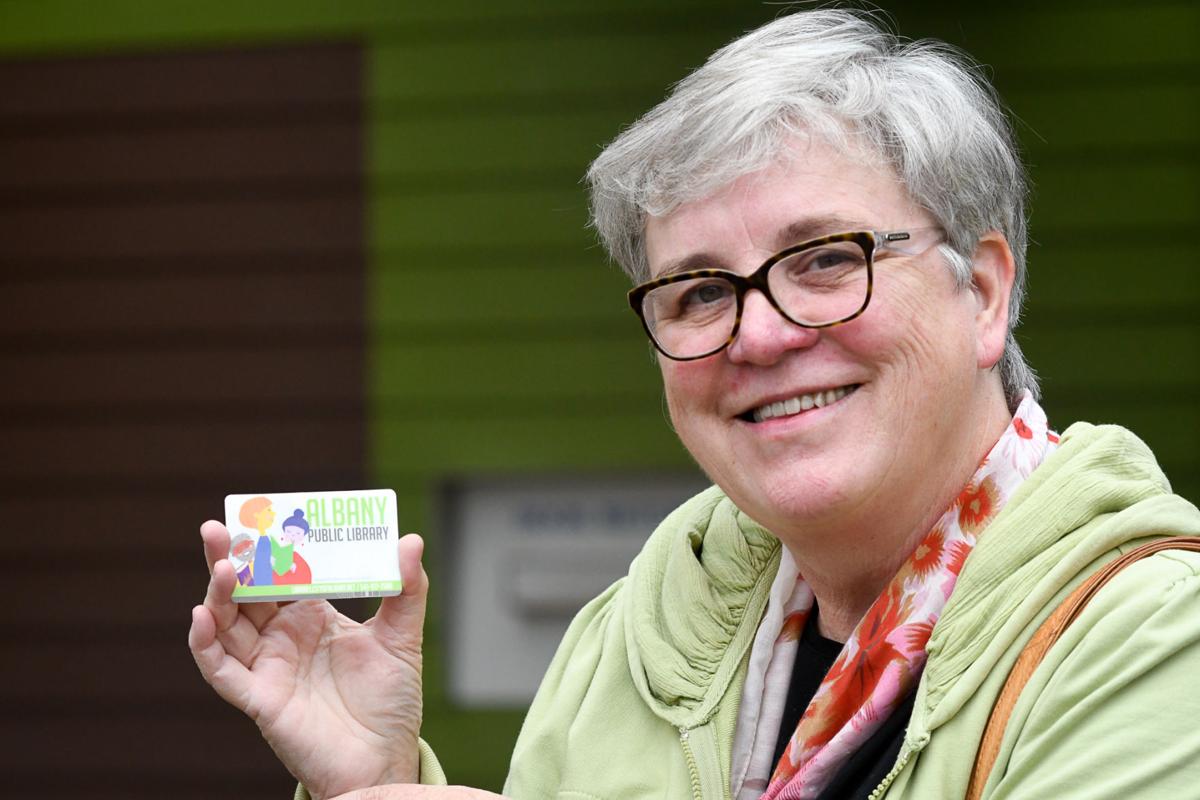 Melissa Saylor holds up her new Albany Public Library card, which displays some of her artwork. 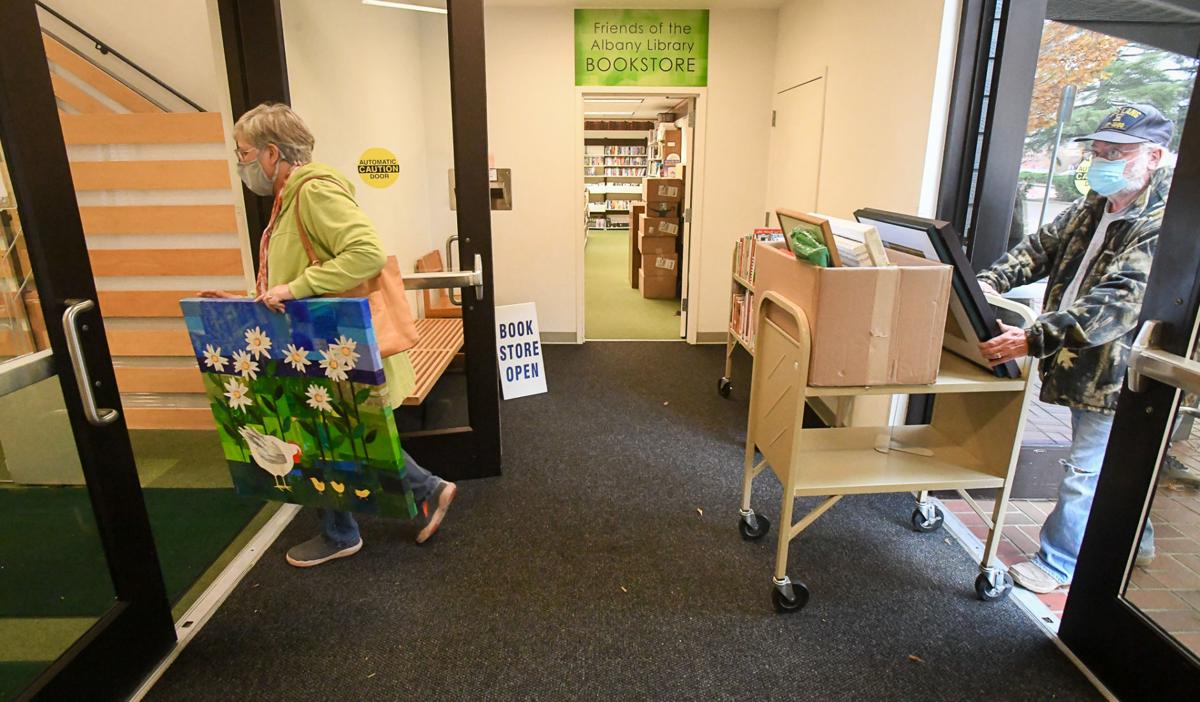 Melissa Saylor and her husband Steve Saylor arrive at the main branch of the Albany Public Library to install her show. 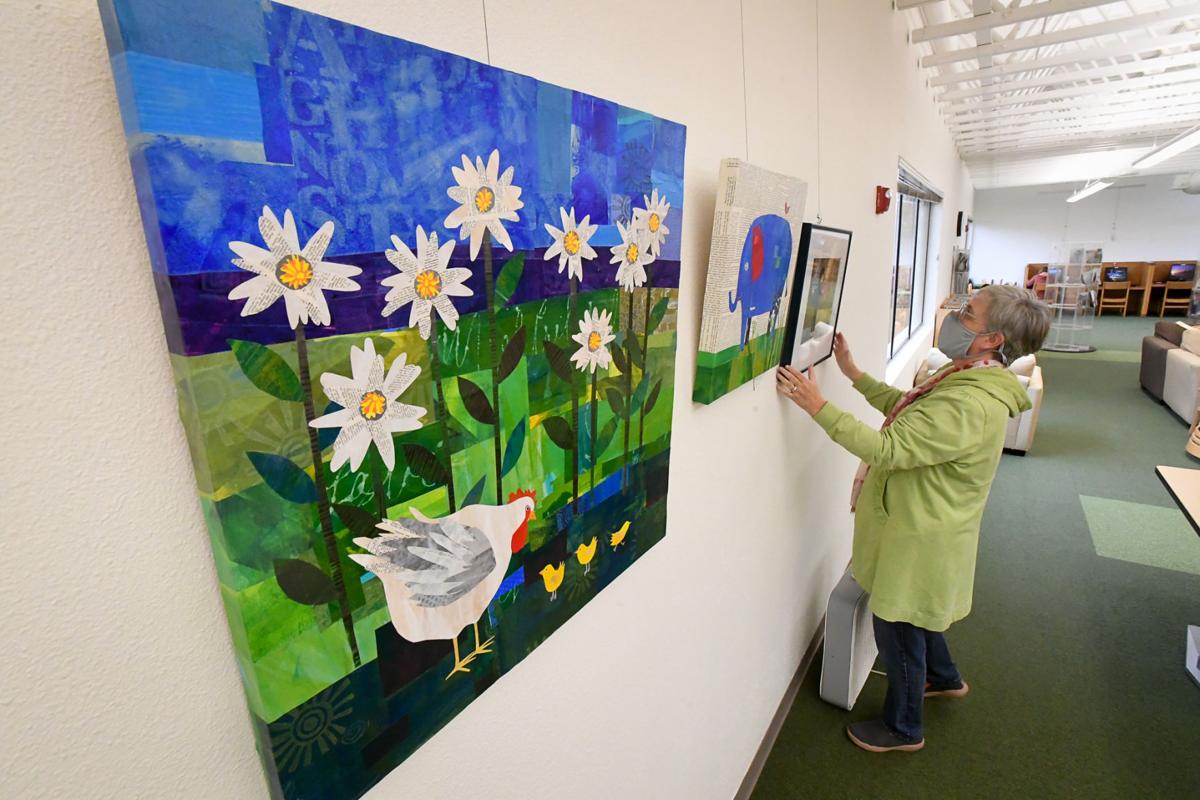 Melissa Saylor sets up her artwork at the main branch of the Albany Public Library. 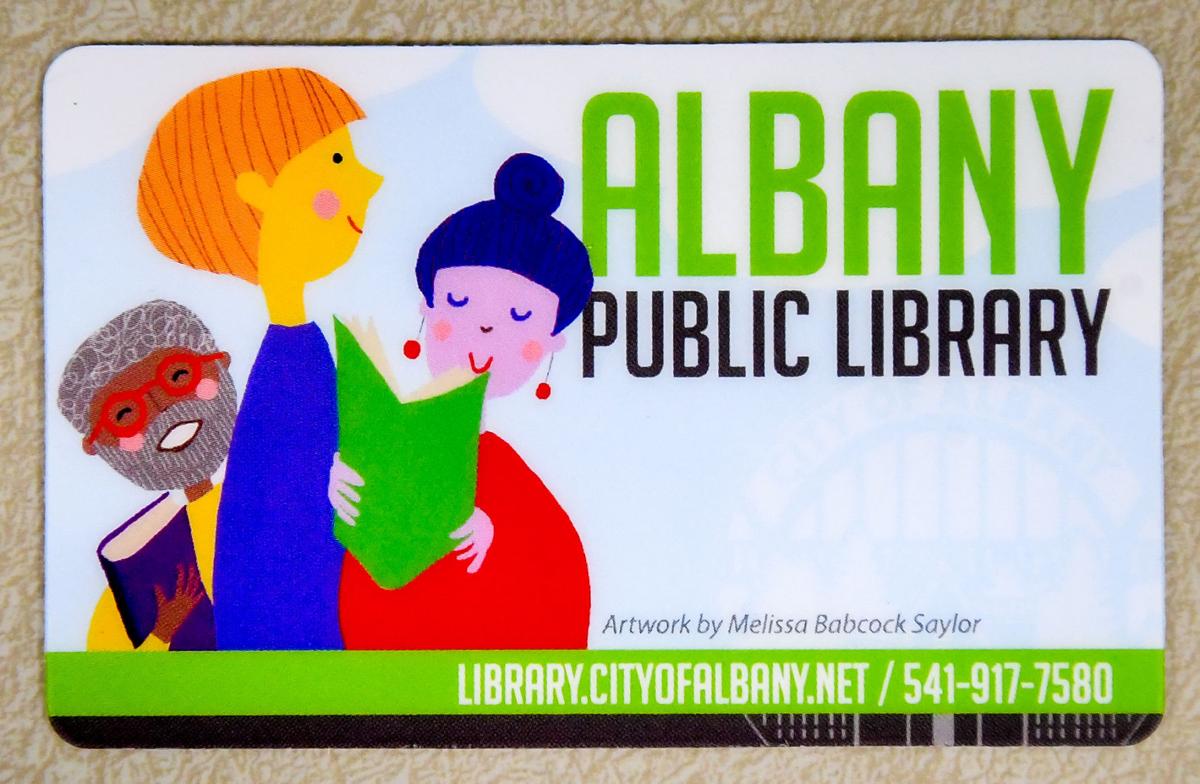 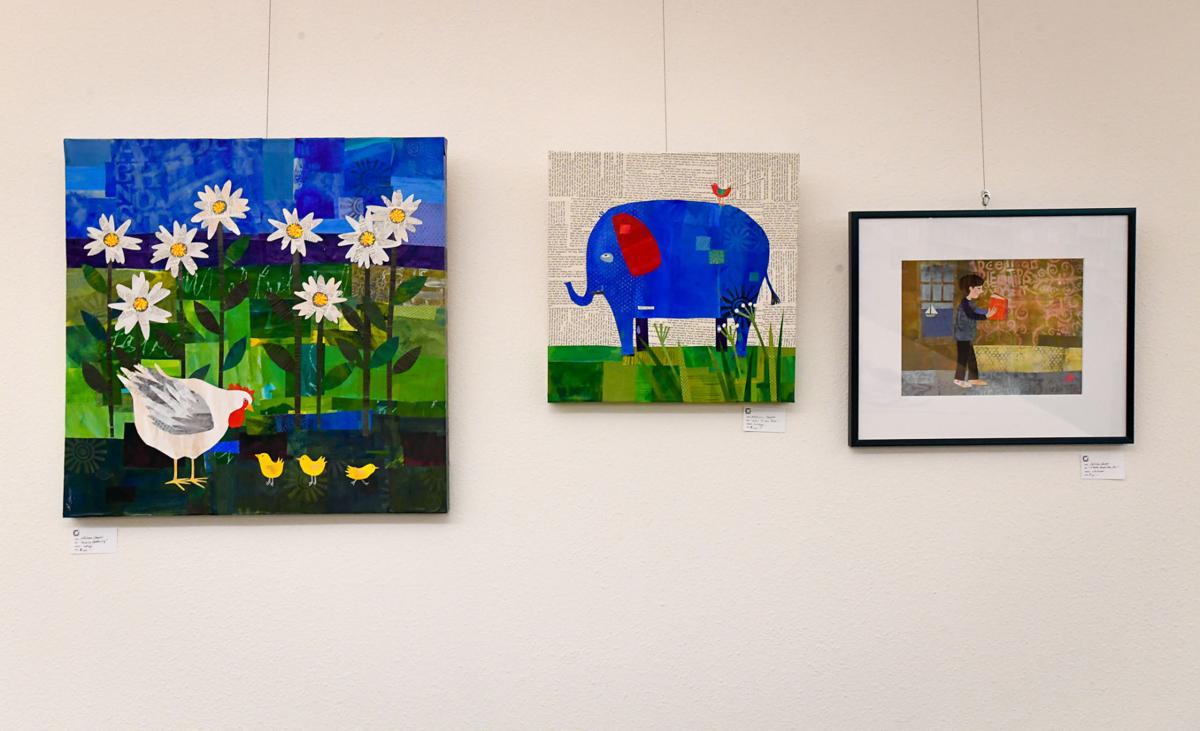 Melissa Saylor's work at the main branch of the Albany Public Library, from left: "Family Gathering," collage; "Now I Am Free," collage; and "A Book About the Sea," cut paper.

Fans of Albany artist Melissa Babcock Saylor can now carry around a wallet-sized piece of her work, thanks to the Albany Public Library.

The library used one of Saylor’s designs for its new library card: two smiling adults, one with dark hair and one with gray, both holding books, flanking a red-haired child gazing at the library’s logo.

It’s available as a choice to residents whose current cards have expired, or on request for $1 to those who want to replace a currently active card.

“We haven’t had a new design on our library cards for a very long time,” said assistant director Amanda Bressler. “We decided it was time for a refresher. It seemed like a nice, uplifting thing to do for the community, considering the last year with COVID, and we wanted something that came from the community.”

Bressler said the library formed a committee to talk with local artists about submitting artwork for consideration and evaluate the choices.

“Melissa answered the call right away,” Bressler said. “She was very excited and very generous.”

“Excited” is exactly the word, said Saylor, who learned of the opportunity in July. “We could submit as many designs as we wanted. I submitted six designs, some on digital computer, some of cut paper.”

Designs were due by Sept. 3. On Sept. 21, Saylor learned the library especially liked one of the digital submissions, which featured all children, but wondered if it could be tweaked a little to include people of various ages. Saylor changed the picture, City Communications and Engagement Officer Matt Harrington applied the library’s branding and did the layout, and the library began production.

As soon as they were ready, “I went right down and got a new library card,” Saylor said.

The library began distributing the new cards to the public the first of this month. Nonresidents can get them too, but may have to pay a fee to have a library account unless they live in Lebanon or another community that has a passport connection with the Albany library.

Bressler said the cards with Saylor’s artwork will be available as a choice for people who want or need new cards, until they run out. Library patrons also can continue to choose the old cards, which feature information rather than artwork.

No decisions have been made as to whether the library will ask for artwork submissions in the future.

One other local artist submitted work for consideration this summer, but the committee decided to go with Saylor’s, Bressler said, adding, “We thought the process was successful. We would be open to having a process for a new card design, just as we’re open to continue using Melissa’s design if it proves to be possible.”

Saylor is a professional artist, but donated her work to the library for this use.

“I love the library, and I love doing artwork with books in it,” she said. “I don’t mind at all giving back to this community, because it’s given a lot to me.”

In connection with the issuing of the new card, artwork by Melissa Babcock Saylor will be on display through Nov. 30 at the main branch of the Albany Public Library, 2450 14th Ave. SE.

Saylor, of Albany, is a lifelong artist whose professional works include illustrations for five children’s books. She works primarily with cut paper and collage, but also taught herself to do digital artwork on an iPad during the restrictions of the COVID-19 pandemic.

The nearly two dozen works hanging this month in the library include some that are related to reading, Saylor said, and others that are just meant to be colorful and cheerful.

“I love for kids to see themselves in artwork — all kinds of kids,” she said.

Mid-Valley Live: 'All Together Now!' is ACT's first live musical performance in close to two years

It's rehearsal night for "All Together Now!" and the chapel of Good Shepherd Lutheran Church can barely contain the joy.

Night fright: ACT sinks its teeth into 2021 season with ‘Dracula’

Cindy Moran can't wait to come out of the supply closet.

Dolly Parton and Sandra Oh named 'People of the Year' 2021

Dolly Parton and Sandra Oh named 'People of the Year' 2021

Melissa Saylor holds up her new Albany Public Library card, which displays some of her artwork.

Melissa Saylor and her husband Steve Saylor arrive at the main branch of the Albany Public Library to install her show.

Melissa Saylor sets up her artwork at the main branch of the Albany Public Library.

Melissa Saylor's work at the main branch of the Albany Public Library, from left: "Family Gathering," collage; "Now I Am Free," collage; and "A Book About the Sea," cut paper.