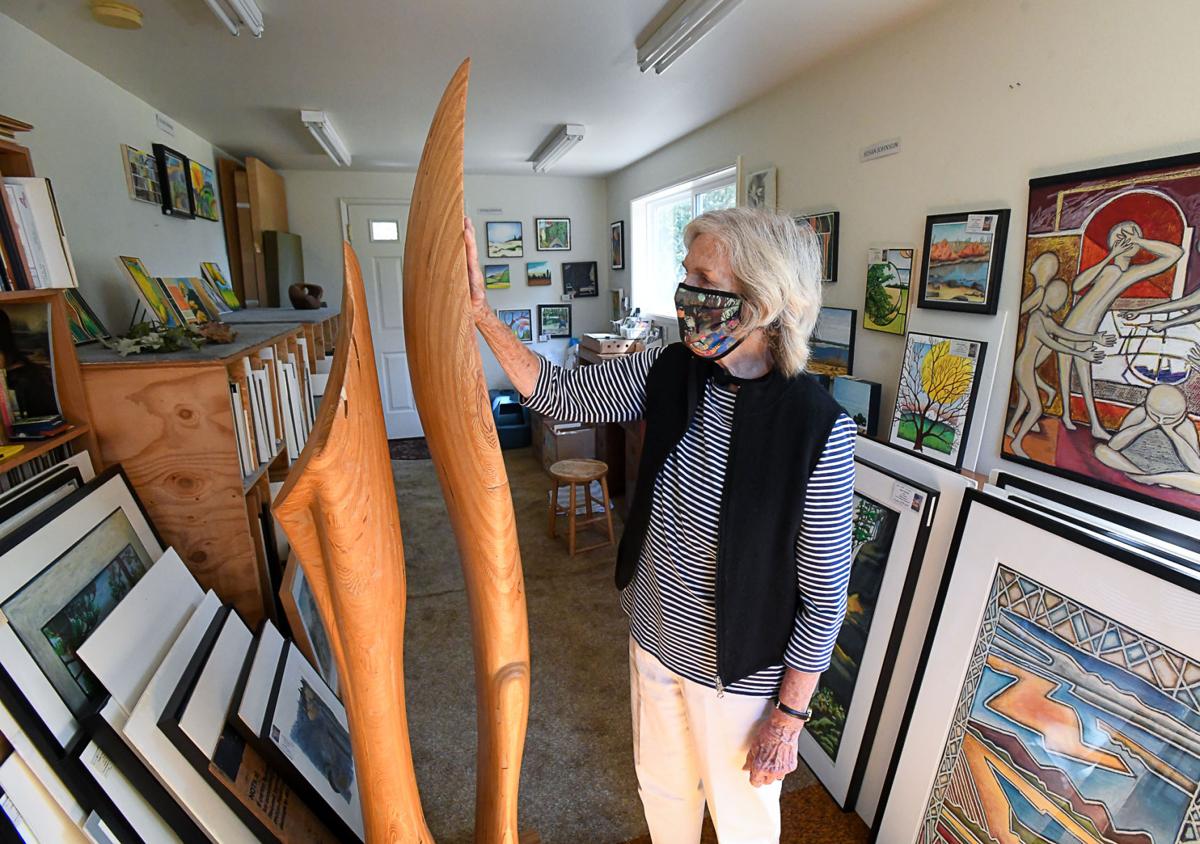 Corvallis artist Susan Johnson will have 35 pieces including this six-foot-tall sculpture in a retrospective show at the Corvallis Arts Center. 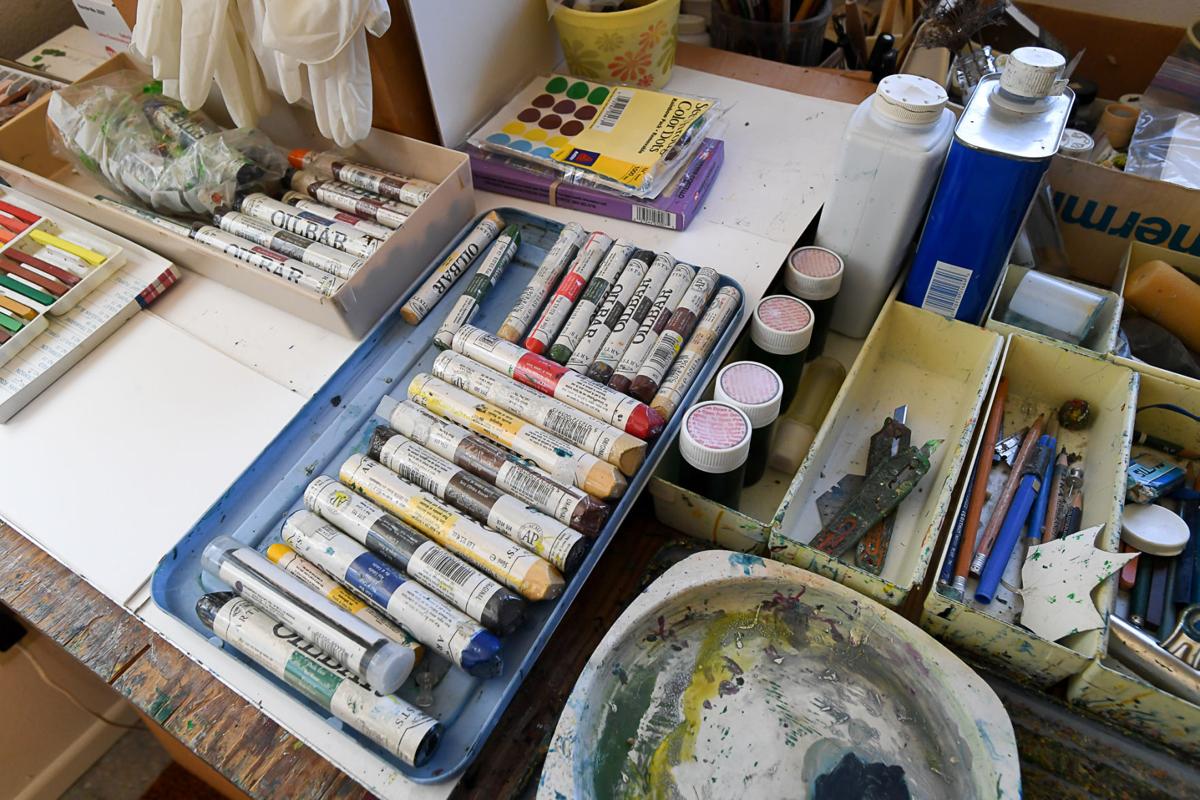 JENNIFER MOODY For the E

As a college student, Susan Johnson had the chance to shadow an elementary-school art teacher and help her as she visited various classrooms.

“And,” Johnson recalled, “she was awful.”

The teacher didn’t spend any time helping the children create their own visions. Instead, she came with everything pre-designed and pre-decided. The children just took turns coming up to the board and adding in their pre-cut piece.

And so,though she had studied art rather than teaching, Johnson became a teacher. In one way or another, she has been teaching art ever since; showing her students and her viewers how to look at the world through a fresh perspective.

Mid-valley patrons will get a look at her perspective this fall with “Retrospective: Susan Johnson,” which opens Friday, Sept. 4, at The Arts Center, 700 S.W. Madison Ave., Corvallis.

Johnson’s collection of work will be on display through Oct. 17. Admission is free.

A virtual reception will be held from 5:30 to 7 p.m. Thursday, Sept. 10. Johnson also will be featured on Zoom and livestreamed on Facebook for “Artist Lunchbox Talk@Home” at noon on Thursday, Sept. 17. In addition, she will be honored at The Arts Center’s “Art for the Heart: Virtual Gala” on Oct. 10.

"Susan spent her lifetime fostering young artists as a mom, grandmother, an educator and a supporter of other working artists," said Cynthia Spencer, executive director of The Arts Center.

Johnson did this, she said, through "patronage, participation in a longstanding artist critique group, and being an example of someone always advancing her own artistic development by working hard, finding her niche and creating bodies of work for regular exhibit."

Spencer said Johnson has promoted arts "as a basic human need for youth and adults. A showcase of the arc of her career through her artwork is one with which our community of educators will enjoy connecting."

In a career that spans more than six decades, Johnson has taught, studied and created art. Her pupils have been elementary age, college level and senior citizens. She has been an arts administrator and served eight years as The Arts Center’s executive director.

She has been involved in many efforts to make art public throughout Corvallis, helped develop the da Vinci Days Festival and worked with the Oregon Arts Commission.

And while she has her favorites, she rarely limits herself to just one medium: Visitors will find collages, sculptures, pencil drawings and creations made with oil paint sticks among her works in the retrospective.

Johnson took drawing and sculpture classes from Clint Brown and Marian Bowman at the Oregon State University Art Department between 1976 and 1982. Some of her assignments from that time period will be part of the retrospective, including the wooden sculptures.

Brown especially pushed Johnson to explore, she said. He told her the next thing she’d be assigned to do was a sculpture, 6 feet tall, of laminated plywood.

So she did. “I still love them,” she said. “I’m glad to have an excuse to get them out in public again.”

Another piece from that time is a self-portrait collage that was to be a part of the faculty art show. The ceiling of the Fairbanks building, where the Art Department is housed, had pieces flaking from it - so Johnson collected them and glued them to her portrait, just to give it some texture.

“A lot of artists take one style and follow it through their life. And I don’t,” she said. “I get inspired by lots of things.”

Johnson and her twin sister, Ann, grew up in Milburn, New Jersey. They were best known by their classmates for two distinctions: for looking so much alike that few could tell them apart, even after years of acquaintance, and for the innate creativity that got them voted “Most Artistic” for their graduating class.

Not everyone appreciated their visions, however, Johnson remembered. She and her sister created the high school yearbook that year and decided instead of the traditional square or rectangular photos, they’d cut them into shapes. That didn’t go over well with people who preferred a more traditional look.

Lines, shapes and forms still intrigue Johnson, but texture and color are her biggest inspiration. Moving to the West Coast with her husband when he was going to graduate school in Seattle was “an extremely wonderful visual experience,” she said, and part of what shapes her work even today.

“Even (my) abstract pieces tend to have a little nature push,” she said.

She creates from memory and the scenes that fill her mind, often using colors that are bright, intense and even exaggerated. Orange-gold beaches, for instance. Rivers of vivid blue.

It’s more fun that way, she said, and it makes you look at the world differently. “I don’t think it has to be real - it has to just catch your eye.”

Johnson said she’s honored by The Arts Center’s decision to feature her retrospective, in part because the center itself means so much to her. It’s a place, she said, where people can come to experience art and where artists can come for guidance and opportunities to showcase their own work.

All of that is critical, she said, because art inspires us to stop and think and to see the world differently.

What: “Retrospective: Susan Johnson,” artwork from a career that spans more than six decades of teaching, studying and creating artwork. Johnson has taught elementary age, college level and senior citizens, has been an arts administrator and served eight years as The Arts Center’s executive director.

The governor has spoken and Oregon is back in lockdown — but you can still commune with nature, at least virtually, through a visit to the art…

Corvallis artist Susan Johnson will have 35 pieces including this six-foot-tall sculpture in a retrospective show at the Corvallis Arts Center.