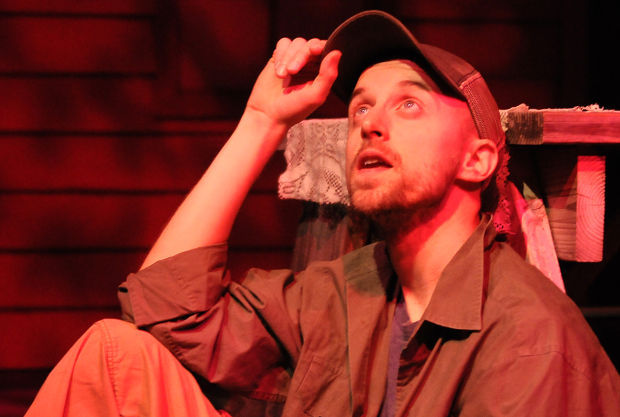 Former soldier Mike 'Buddy' McIntyre (Brian Smith) talks about his method of relaxing by sitting in the still darkness of his daughter's closet. 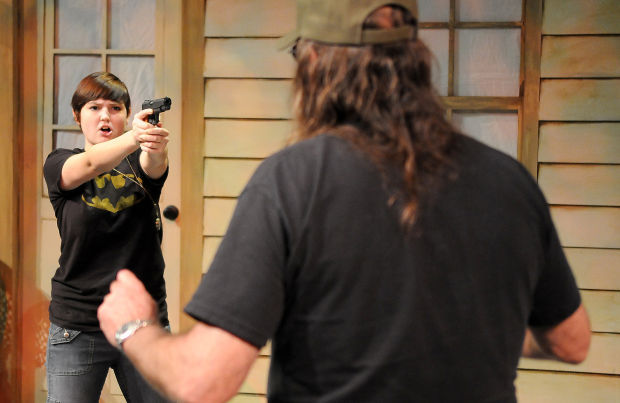 Darcy (Nicolette Pullen) points a gun at a stranger (Wayne Gray) that wanders into her family's backyard. 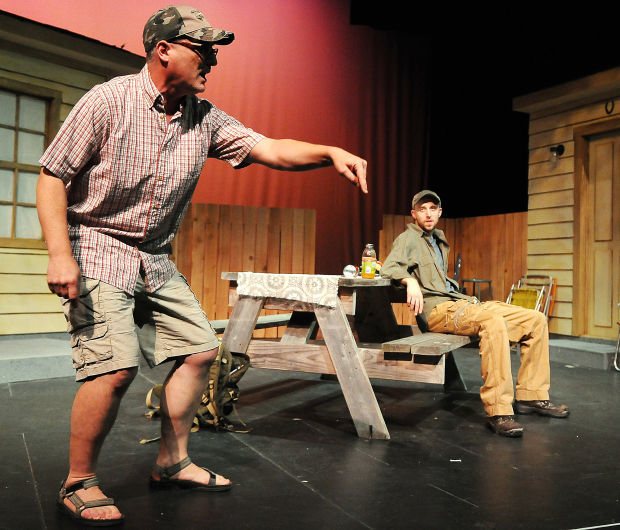 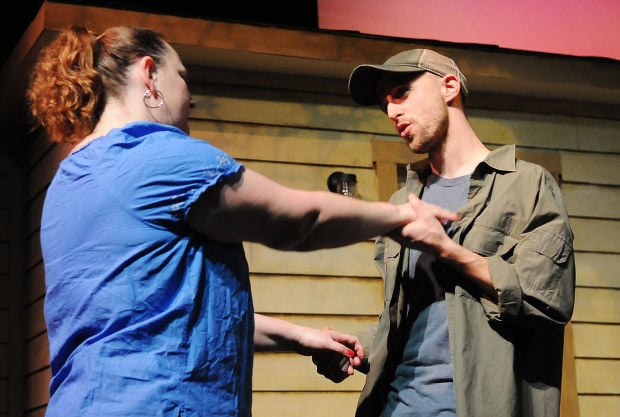 Dan Stone, theater director at Linn-Benton Community College, is a Navy veteran, and comes from a whole family of veterans. He said he has wanted to do a community-engaged play-making performance that focused on veterans, but never found the time to do so. Three years ago, he and Lewis Franklin, also a veteran and instructor at LBCC, discussed the possibility of the idea, but never got it off the ground.

“Maybe I was scared of the subject matter,” Stone said. “This idea is very close to home.”

Then in the summer of 2013, Stone decided to make his idea come to life — as well as change the focus of the theater department toward more community-engaged play-making.

“Community-engaged play-making is telling the stories of our community,” Stone said. “We will still do typical plays — at least one a year — but they will be all original plays, all coming from Linn and Benton counties.”

With this new change, Stone felt the idea of a play focused around veterans was more fitting.

“The idea of community-engaged play-making is to identify a micro community with a story to tell, then figure out what are some of the issues these communities face.”

To focus on the issues, Stone connected with community partners and did story circles. The support organizations were the Albany Counseling Center and the Family Assistance Center in the Albany armory.

“Once we make these connections, they open the doors for us to find people to talk to and hold story circles.”

A story circle is a structured event where the community can tell their stories.

“We aim to find out what is happening and what is common between all the stories,” Stone said.

He again contacted Franklin, who served in Iraq with 2/162 in Corvallis, and Hurricane Katrina with 182nd Cavalry in Lebanon before retiring from the Oregon Army National Guard as a first sergeant.

From there, Stone did personal interviews with people who were willing, talking with male and female veterans from all military branches who served in the Korean, Vietnam and Iraq wars.

“Post Traumatic Stress Disorder was one very common thing across all the veterans I talked to,” Stone said.

During the summer of 2014, Stone spent his time gathering PTSD stories from the veterans and their families. He then took the information and put it into a play.

Set in Albany on Memorial Day, the main character, Mike “Buddy” McIntyre, and his family are celebrating the holiday with family and friends, when Buddy’s father, Cooper, unexpectedly shows up. Buddy and his father have been estranged from each other for the past 15 years, and both men are struggling with their own battles with PTSD and how it has affected their relationship with each other and their families.

Cooper is played by Wayne Gray, whose wife works at LBCC. He is an Army Vietnam veteran. When Stone originally started talking to Gray, he brought up the subject of sexual abuse in the military and Stone knew he needed to add that to the play as well.

Stone also wanted to focus on how PTSD affects a soldier’s family and not just the soldier him or herself. He has personal experience because his grandfather suffered from PTSD.

“The audience should expect some very heavy moments in this play and some funny moments,” Stone said.

WHAT: Linn-Benton Community College’s “Tango Mike (Thanks Much)” directed by Dan Stone.

COST: $10 general admission, $7 for seniors and students; and free for veterans and LBCC students. Tickets can be purchased online for no fee at www.linnbenton.edu/ruselltripptheater, or at the Russell Tripp Performance Center from 1 to 4 p.m. the week of the performance, or one hour before the performance.

An underappreciated gem: 'Lucky Number Slevin' tops other crime thrillers of the 2000's

We’re taking it back 15 years, clear back to April of 2006, to look back on an underappreciated film of the mid-2000’s heist thriller era. Whi…

The Arts Center’s Around Oregon Annual exhibit opens June 24 in the Main Gallery.

Get ready to hit the trail with Dirty Boots, our outdoorsy online portion of Mid-Valley Live.

Fitton Green is a hillside meadow just west of Corvallis that has amazing views of the Coast Range, wildflowers and more.

Former soldier Mike 'Buddy' McIntyre (Brian Smith) talks about his method of relaxing by sitting in the still darkness of his daughter's closet.

Darcy (Nicolette Pullen) points a gun at a stranger (Wayne Gray) that wanders into her family's backyard.