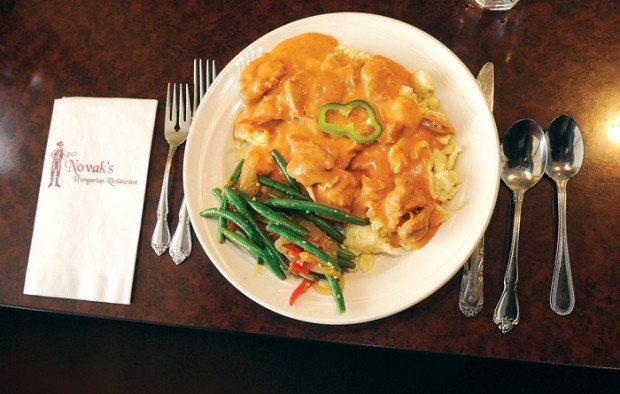 Novak’s Hungarian Restaurant in Albany is highly regarded for its variety of tasty dishes, but the main attraction is the one above: the chicken paprikás. It’s a homemade concoction of restaurant co-founder Matilda Novak, a native of Pécs, Hungary. (Mark Ylen | The Entertainer) 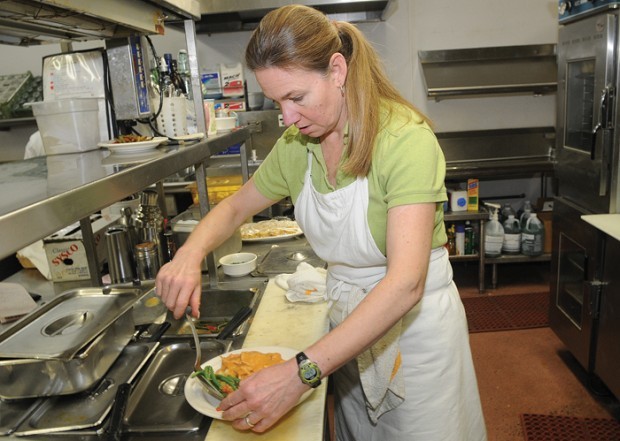 Karen Novak adds a side of green beans, bell peppers and onions to a plate of chicken paprikás in the kitchen of her family’s restaurant. She has been the owner for three years. (Mark Ylen | The Entertainer) 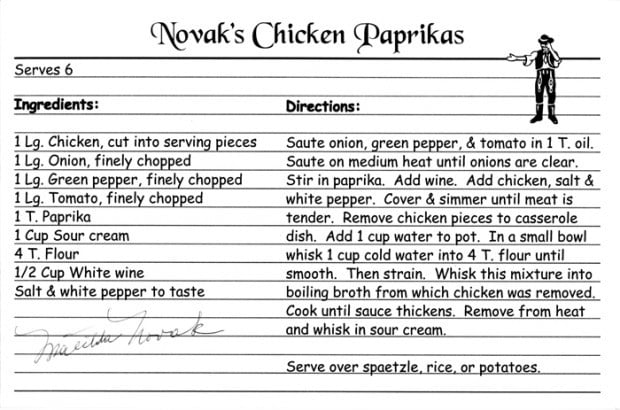 ALBANY — My mother-in-law, Diana, is a culinary master who likes to say that the gateway to her heart is through her stomach. Her diminutive daughters were cut from the same cloth. I could come home with a dozen roses for my wife, and her likely response would be, “Yeah, but where’s my bean burrito?”

Food is the essence of all that is good and holy in the world, and the mid-valley is no stranger to excellent cuisine. The No. 1 reason the Linn-Benton area has won my affection is its impressive quantity of quality restaurants. (The weather is a distant No. 872.)

And the trick to successfully navigating the valley’s eateries is finding out specifically which meals are best at which places. Ordering the One Bad Thing on an otherwise fabulous menu might mean you never return, and then you’re left to wander through life like a lost little puppy while everyone else eats like a king.

Luckily for you, the Entertainer starts a new series this week on the area’s must-eat dishes. These are the meals that every self-respecting mid-valley citizen must try at least once. We’ll write about them — not to critique the taste; simply to highlight the culinary phenomena — and hopefully spur you to try some new food.

And we want you, gentle reader, to help us determine which plates to feature. Send your favorites to tyler.hansen@lee.net, and we’ll write about a new one every so often.

I’ll serve as the guinea pig consumer on most occasions — it’s a brutal job, I know — because I’m willing to eat anything. Well, anything except mushrooms. (If mushrooms are so great, how come they grow wild every two feet in Oregon and no one bothers to pick them? Do you think we’d treat a ribeye steak the same way if it sprouted from the ground? I’d say mushrooms are for the birds, but not even the birds are interested.)

Anyway, to start a series as cool as this one, it’s vital to kick it off with a superstar meal, one that is widely hailed as a cornerstone of the local food community. For that, we turn to Central Europe.

Not a week goes by that I don’t hear someone spout praise for Novak’s Hungarian Restaurant in Albany and, specifically, its chicken paprikás. That’s no surprise to Matilda Novak, who opened the restaurant with husband Joseph in April 1984 and said the dish has always been the kingpin of the menu.

The chicken paprikás (that’s POP-ree-kosh) at Novak’s is anchored by chunks of supremely tender chicken — boneless and skinless — and drenched in a creamy paprika sour cream sauce and served on a bed of homemade Hungarian pearl noodles. (There’s only about a tablespoon of sour cream used in each dish, along with onions, green peppers, tomatoes and white wine.)

The recipe deviates from the traditional Hungarian dish, which calls for bone-in chicken and uses no sauce. But Matilda, who emigrated with her family from Hungary in 1957, knew what American customers would prefer.

“Instead of sauce in Hungary, what they use for chicken paprikás is water and grease. Whatever cooks out of the chicken, that’s what you get,” she said. “But I know the people here. They don’t eat mashed potatoes naked. You’ve got to have something on it.

“This is the way we’ve made it from Day 1. This is now going on 27 years, and this is the way our customers seem to enjoy it the most.”

If a meal makes you weep, you know it’s legit.

“Whenever anybody says it’s as good if not better than what they grew up eating and what they loved so much, that’s a huge compliment,” said Karen Novak, one of Matilda and Joseph’s four children and the restaurant’s current owner.

“We’ve had people actually cry while they’re eating it because they’ve haven’t had it in so long and it brings back memories.”

There are lunch ($9.95) and dinner portions of the meal. I got the dinner portion ($13.75) for lunch and had plenty left over to take home. But in the 30 seconds it took for my server to bring a to-go box, I ate the rest of the food.

The beauty of Novak’s chicken paprikás is the family’s willingness to share the recipe. For the restaurant’s 25th anniversary celebration in 2009, they handed it out, complete with cooking directions and Matilda’s autograph.

The Novaks say the recipe they share with customers serves six, but if you’re in a particularly selfish mood, it serves one person six times.

Then again, you probably won’t make it as well as the folks at Novak’s do, anyway.

RECIPE: To make your own version of Novak’s signature dish, find the recipe by clicking on the third thumbnail image above.

This is the first in an occasional series on some of the mid-valley’s most beloved food dishes. We’ll highlight a signature menu item from a local restaurant every so often.

Have a suggestion for which meals we should feature? Send an e-mail to tyler.hansen@lee.net.

Here's a look at a few beloved musicians, athletes, actors and other stars we've said goodbye to so far in 2020.

The E arts and entertainment calendar for Feb. 13-20

Movie review: Cage blasts off in fun 'Color Out of Space'

As front-yard meteorites go, this one's a real player.

Mid-valley: Where to take your Valentine?

The mid-valley offers no shortage of Valentine's Day activities — restaurants have been booked, chocolatiers and florists relieved of their in…

Linn-Benton Community College's theater program has built a reputation on original work, from student Dari Lawrie's "Follow Coyote" in 2015 to…

Bach is back to wrap Corvallis Repertory Singers season

Build your own adventure: Student-written 'The Expedition of Whispers' premieres at OSU

Novak’s Hungarian Restaurant in Albany is highly regarded for its variety of tasty dishes, but the main attraction is the one above: the chicken paprikás. It’s a homemade concoction of restaurant co-founder Matilda Novak, a native of Pécs, Hungary. (Mark Ylen | The Entertainer)

Karen Novak adds a side of green beans, bell peppers and onions to a plate of chicken paprikás in the kitchen of her family’s restaurant. She has been the owner for three years. (Mark Ylen | The Entertainer)

The recipe to Novak's Hungarian Restaurant's famous chicken paprikas. (Courtesy of the Novak family)
© Copyright 2020 Albany Democrat-Herald, 600 Lyon St. S.W. Albany, OR | Terms of Use | Privacy Policy
Powered by BLOX Content Management System from TownNews.com.
You don't have any notifications.