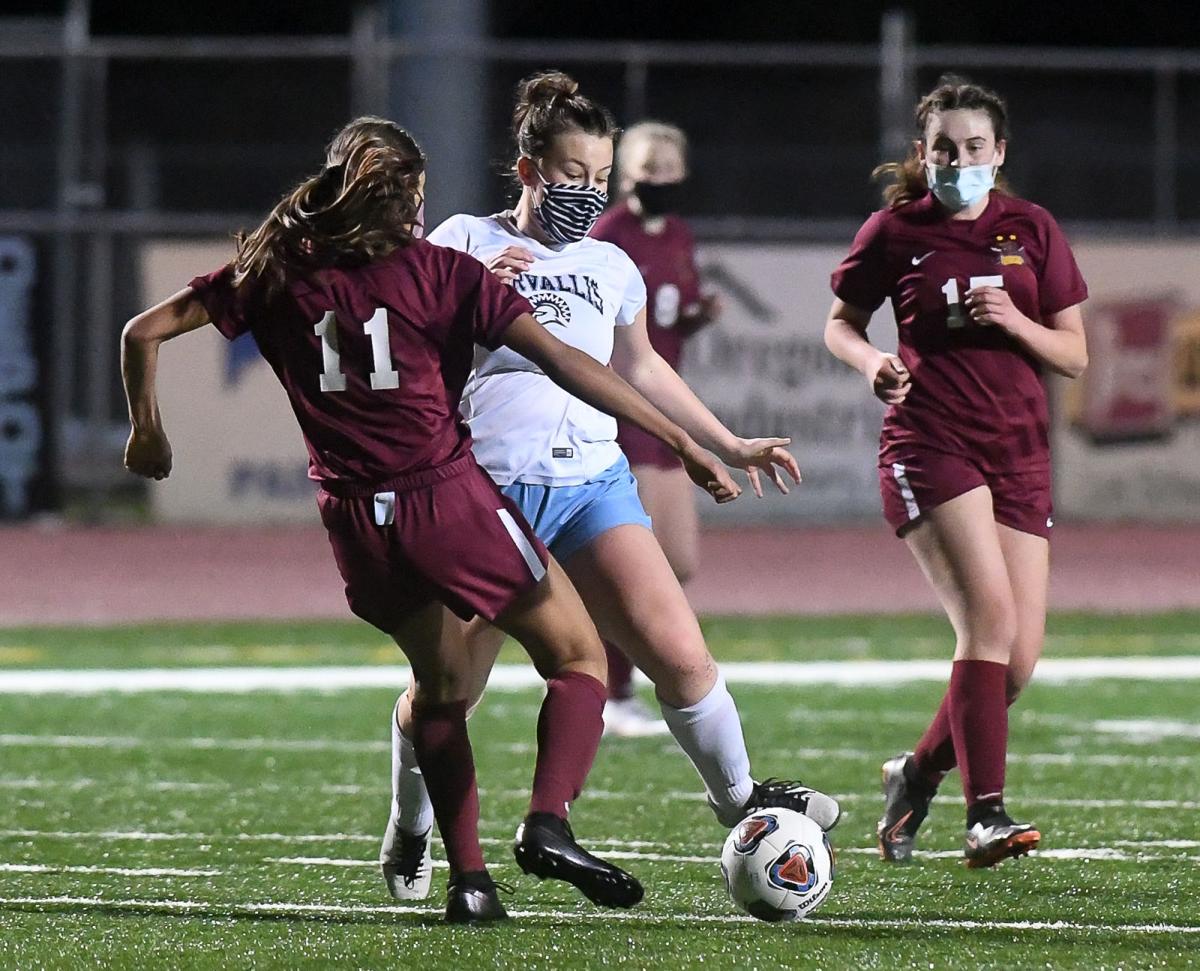 Olivia Allen scored the first Corvallis goal in the Spartans' 2-1 victory over Crescent Valley on Thursday. 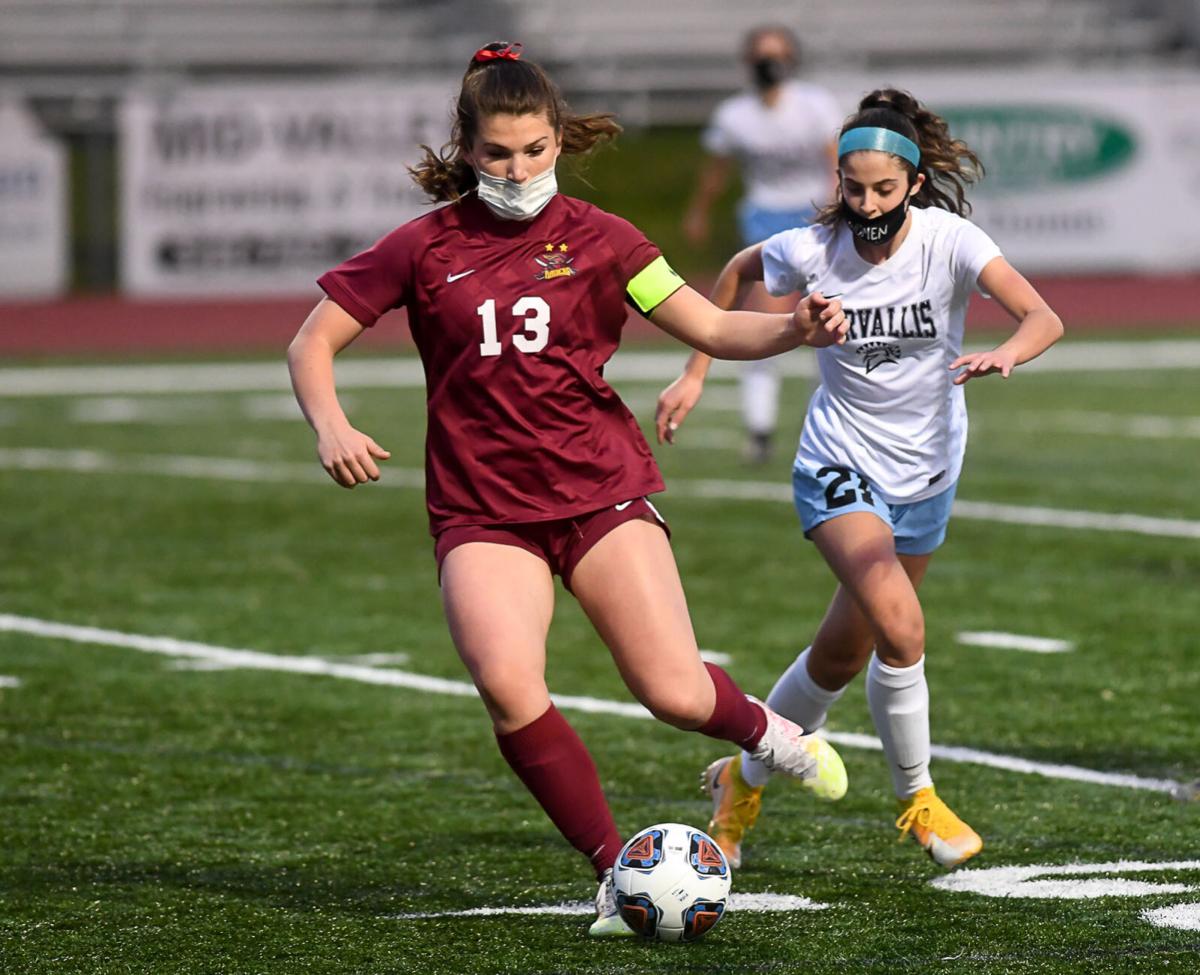 The Raiders' Ana McClave passes the ball against Corvallis. McClave had CV's lone goal in a 2-1 loss to the Spartans.

For the past decade, Corvallis and Crescent Valley have continually been two of the top soccer programs in the state, and the crosstown matchup has featured plenty of thrilling moments.

Thursday marked another epic chapter in the rivalry.

Corvallis hung on for a 2-1 win on the road against CV to improve to 5-0-1 on the season and take a commanding lead in the Mid-Willamette Conference standings. The two teams drew when they played two weeks ago, but this time around, the Spartans ambushed the Raiders (3-1-1) in the first half and never looked back.

For first-year Corvallis coach Hans Rooding, it was a memorable victory, especially considering the recent success of the Raiders; CV has won the past two 5A state titles.

“That team won the state cup twice in a row, and everybody knows it. We have a lot of respect for them,” Rooding said of the Raiders. “You play CV, you know you’re playing the biggest team in Oregon at the moment. I think that does something to everybody. I think we did a good job the first half getting our goals.”

The Spartans’ 2-0 lead appeared to be a relatively safe one at halftime. They dominated possession over the first 40 minutes, and made the most of the chances they got.

In the 19th minute, junior Olivia Allen scored from point-blank after a long shot from Anna Dazey fell at her feet to make it 1-0.

Just over five minutes later, Sara Matsuba slotted home a right-footed shot from 10-yards out to double the Corvallis lead.

“I was screaming after that — (Camryn Pugh) was running at me and I hugged her,” Matsuba said. “We just knew.”

But despite the strong momentum that Corvallis carried into halftime after Matsuba’s goal, CV came roaring back in the second half. The Raiders pinned the Spartans back with a relentless attack over the last half hour and generated plenty of good chances as the game went on.

“We’ve won two state championships because we’ve been really competitive; we always just play the next play and keep going,” CV coach Blake Leamy said. “In the first half we didn’t do that. We had our heads down and we weren’t engaged. So I challenged them. I said, ‘This isn’t who we are. What are we gonna do and who are we gonna be?’ They just came out and showed the stuff we’ve been doing for the last four years. I’m really proud of them for the way they responded.”

With five minutes to go, CV forward Ana McClave broke through and scored to cut the Corvallis lead in half with a thunderous goal. McClave, who buried the winning penalty kick to secure the state title for the Raiders in 2019, provided a constant threat on the Spartans’ goal in the second half.

“She got pulled down, hugged, beat up — Corvallis did everything they could and she had a hard time for awhile,” Leamy said. “The referees frankly didn’t protect her enough. She did a really nice job of staying with it and not getting too involved with what was going on.”

McClave’s goal left the Raiders with four minutes to equalize, and she quickly put another strong shot on goal But it was easily saved, and proved to be CV’s last chance of the night.

“The whole second half was just a fight,” Rooding said. “It’s a good thing to see that our players have a lot of fight in them. CV put a lot of pressure on us in the second half, and we survived and succeeded. … You have to have the calmness to keep playing soccer under those difficult circumstances, and we had that tonight.”

Prep sports: Teams making best of situation to get to play during pandemic

MONROE — Getting high schools athletes onto the fields and courts of competition during the pandemic has been a challenge, to say the least.

Olivia Allen scored the first Corvallis goal in the Spartans' 2-1 victory over Crescent Valley on Thursday.

The Raiders' Ana McClave passes the ball against Corvallis. McClave had CV's lone goal in a 2-1 loss to the Spartans.