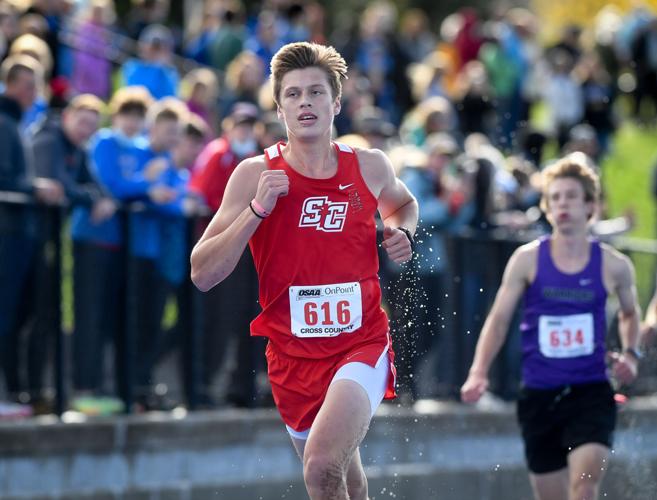 Santiam Christian junior Benjamin Bourne finished sixth in the 3A boys cross-country state race in November after winning at 1,500 and 3,000 meters on the track last spring. 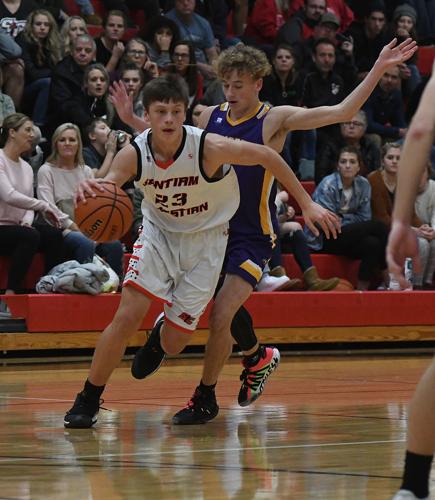 Benjamin Bourne was in his first season of competitive running as a seventh-grader in cross-country and wasn’t satisfied being the fourth- or fifth-best runner on his middle-school team.

In earlier experiences in baseball and basketball, and at that point not dedicated to improving, he “always hated being the drag of the team, the guy who is just on the team and doesn’t get credit for anything.”

Encouraged by parents Curt and Amy to be his best, Bourne worked his hardest to change all that, especially in his distance running.

“I enjoy outworking people and pushing the extra mile, because it really does it pay off,” he said. “I always hated losing to these guys and I was like, why can’t I be faster. I worked really hard and figured it out, and that’s where I am now.”

Where Bourne, now a Santiam Christian High junior, is at is one of the top small-school boys runners in the state. Last spring, he won the 1,500 and 3,000 meters at the 3A track and field season-culminating meet. (The OSAA didn’t hold state championships during the 2020-21 school year due to the pandemic.)

He followed that with a sixth-place finish at state cross-country in November, leading Santiam Christian to fifth. He was a first team all-league basketball player in the winter, helping the Eagles to a Mountain Valley Conference title and a state playoff appearance.

“I guess a little bit surprised but not much because he works very hard and he’s determined to win,” Santiam Christian track and field coach Peter Ness said of Bourne winning last year’s state races with personal bests at both distances. “Sometimes we say we don’t know where Benjamin Bourne’s actual capacity is. We don’t know if he’s reached it yet because he just keeps going faster.”

That’s been the result of a lack of competition as much as anything else.

Bourne and his coaches had been saying all season last spring that they weren’t sure what he could do because he had yet to face some of the other top distance runners in the 3A classification.

In the season-culminating meet at Harrisburg, Bourne outkicked the competition in two close races, setting a PR in the 1,500 (4:18.32) by more than three seconds, and in the 3,000 he ran more than 21 seconds faster (9:15.38) than he had setting a new personal best at the district meet five days earlier.

“I always felt like I could run faster. The training was definitely there, and I was in good shape for that meet and it paid off,” said Bourne, whose sister Emily was a standout Santiam Christian athlete and now plays volleyball at Oregon State.

He edged Westside Christian’s David Dugan in the 1,500 in the first meet this spring to win in 4:22.54 and won a 3,000 in 9:28.82 last week without any competition. Those times put him fourth and fifth, respectively, on the 3A season lists.

Bourne has the April 23 Meet of Champions at Sweet Home circled on his calendar as a chance to gauge his training fitness as well as measure himself against some quality competitors. There he will face some of the other top distance runners (4A and down) in somewhat of a state preview meet.

“I would see it as the best opportunity as I can get,” he said. “I’m excited to race some of the guys … and I know a lot of the guys in that meet.”

Bourne trained over the winter during basketball season, hopping on the treadmill and then as the weather got better hitting the trails surrounding his parents’ home at McDonald-Dunn Forest, a popular recreation area near the Santiam Christian campus. The forest provides a convenient and beneficial year-round training tool.

Bourne said he’s happy with where his training is at now. With more hills to be run and the pace of speed work and miles increasing in the next month leading up to the postseason, he expects that to translate to better times. On the track, Bourne appreciates being pushed in workouts by teammates Colin Longballa and Caleb Ness, the Eagles’ top 800 runners.

“I think he’s coming into a place where he needs to and he’s just taking steps necessary,” coach Ness said of Bourne after the first meet of the season. “He’s not pushing himself so hard that he injures himself. Pushing himself just enough so that he improves.”

Looking ahead, Bourne is excited about the few meets before district and state that will feature others who can challenge him, the Meet of Champs among those. His time goals are to run sub-9 minutes in the 3,000 and in the low-4-minute range in the 1,500.

“I want to have the best time in the state or win the state championship, whatever that takes,” Bourne said. “If I can run those low times, that will be ideal for me.”

A big first inning in which South Albany High produced five solid hits and took advantage of some help proved to be the difference Friday.

Hannah Jensen breaks into a wide smile when asked about being softball battery mates with her younger sister Holland.

A ninth-seeded team without even one senior played suffocating defense and showed the patience to find its best shooter, not rattled by the ne…

Lebanon had five home runs in a 21-1 home win against South Albany in the Mid-Willamette Conference opener for both teams.

Jadon Roth pitched a no-hitter with 11 strikeouts, one walk and one hit batter Thursday in Santiam Christian’s 9-0 home win against Harrisburg…

High school softball: Bulldogs find their bats to pull away from RedHawks

West Albany High had confidence that it would eventually find the hits that had eluded the Bulldogs through most of the first four innings Friday.

Chance Nolan wants more out of the 2022 football season.

LEBANON — About two-thirds of the Lebanon High baseball team made the trip to Florida for two games over spring break, with the rest staying h…

Teammate Karsten Sullivan was warming up in the bottom of the sixth inning just in case something went sideways in the top of the seventh.

5A, 4A high school basketball: Philomath's Sage Kramer voted player of the year

3A, 2A track and field: Monroe's Laura Young heads to Hayward as a favorite

Santiam Christian junior Benjamin Bourne finished sixth in the 3A boys cross-country state race in November after winning at 1,500 and 3,000 meters on the track last spring.