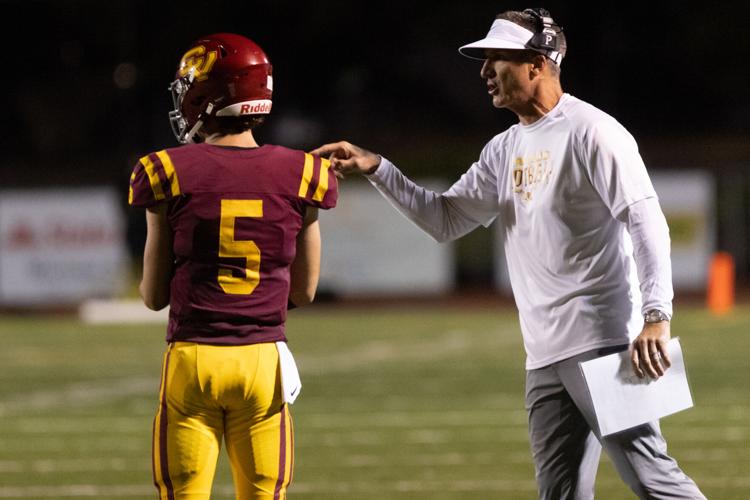 Crescent Valley's Rocco McClave (5), talks with his father and Raiders coach Andrew McClave in the final minutes against Corvallis. 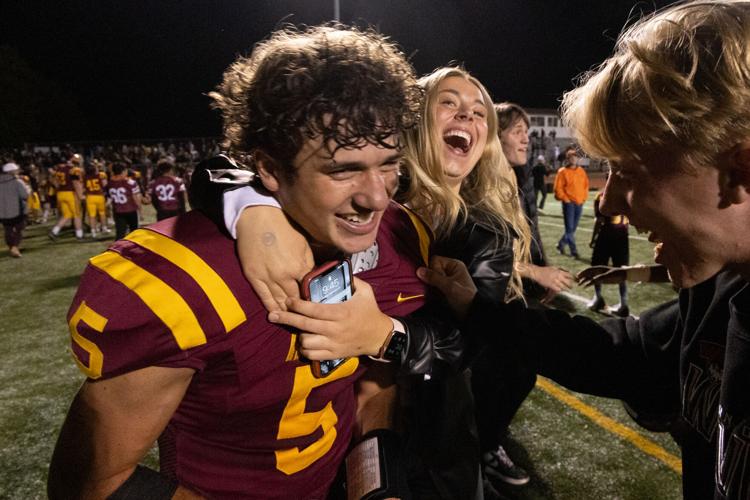 Crescent Valley quarterback Rocco McClave (5) gets a hug from his sister, former CV athlete Cali McClave, after the game against Corvallis.

The Raiders had a rough season, going 1-8 overall and 1-7 in Mid-Willamette Conference play. But in those two games, they grabbed the attention of the state’s high school football community.

McClave threw for 450 yards and five touchdowns Oct. 7 in a 74-52 loss at Silverton. Walker Still caught three of those scoring passes and fellow wide receiver Luey Campos the two others.

But three weeks later, on Oct. 27 at Dallas, CV’s passing game had everything clicking in a contest that went up and down the field against two struggling defenses.

McClave set all-classification state records with 654 passing yards and 10 passing touchdowns, topping the previous marks of 613 and nine, respectively, in a 79-71 defeat.

“I think just from the start we were focused and knew it was the last game, so there was nothing to lose and to go out with a bang. We were on time. We were just rolling,” said, McClave, a junior. “We had gone at it all season and we had figured out what to do. We were all on the same page at the same time.”

Campos, a junior, finished with 11 catches for 313 yards and five touchdowns. His yardage is ninth on the state’s all-time single game list. Still, a senior, had eight receptions for 216 yards and four scores.

Dallas, which would reach the state quarterfinals, had four players with 93 or more yards rushing. The 150 total points in the game are the most in the state in more than 70 years.

“They had no answers for what we were doing,” said Raiders coach Andrew McClave, Rocco’s father. “And likewise, we were so miserable trying to stop their offense, which they would run it right down our throats. It’s one of those games that just took a life of its own.”

Outside of it season-opener against Silverton, where the Foxes scored 40, Dallas didn’t give up more than 31 points in any other game this season.

Rocco McClave and Campos were all-conference first-team selections, while Still made the second team.

McClave finished the nine-game season with 2,704 yards and 28 touchdowns against four interceptions while completing 62.9% of his passes. He also had 308 rushing yards and scored three times on the ground.

Campos, who has played with the quarterback since sixth grade, had 54 catches for 1,100 yards and 14 touchdowns. Still, a first-year wide receiver, had 42 grabs for 847 yards and 10 scores.

Through two weeks of the postseason, Rocco McClave still leads 5A (and is second among all classifications) in passing yards on the season and is second in passing touchdowns, while Campos is first in 5A in receiving yards.

“His confidence grew throughout the year, and he just has a real good understanding of what he’s trying to do and who he’s gauging to throw the ball to,” coach McClave said of his son, the second-year starting varsity quarterback. “Being able to see the field and then effectively buy time in the pocket has been a real growth thing for him.”

Rocco McClave spent extensive time in August with his top two receivers to get their timing down. By the time the first game on the opening Friday of September arrived, he knew they were ready.

McClave saw his own abilities to improve, particularly in staying patient under pressure after the snap of the ball.

“The first game I wanted to run around and not stay in the pocket,” he said, adding that he was able to take advantage of an improved offensive line this season. “Throughout the season I got more relaxed and moved in the pocket and didn’t try to escape every time. So I think my pocket presence got better throughout the season.”

Athletes in many sports talk about the game slowing down as they gain more experience and get more comfortable in their surroundings.

McClave said that happened for him at Dallas.

“It all went so smoothly. There wasn’t really many hiccups,” he said.

During the season, CV saw the emergence of two other players, and senior Sean McQuillan and sophomore Mason Riney, who contributed in the passing game. Both had clutch catches against Dallas that kept drives alive.

Riney started the season on the junior varsity but finished it as a varsity starter.

The Raiders’ offense pivoted about a month into the season when the team’s strengths and weaknesses were realized.

The Silverton game put a spotlight on what the Raiders could accomplish passing the ball.

“We didn’t play great all year, but we kept getting more advanced. The passing game was a big deal because we were ineffective running the ball,” coach McClave said. “We created a lot of momentum and kept riding that wave, and the receivers kept getting better. We had young guys stepping up and Rocco kept improving.”

HILLSBORO — Adversity has been something Crescent Valley girls soccer has faced in several forms this season.

West Albany truly had a roller coaster of a football season.

Santiam Christian senior Elise Linderman was named the PacWest Conference volleyball player of the year, as voted on by the league’s coaches.

Central Linn’s Gemma Rowland was selected to the 3A/2A/1A girls soccer all-state first team by a vote of the state’s coaches. 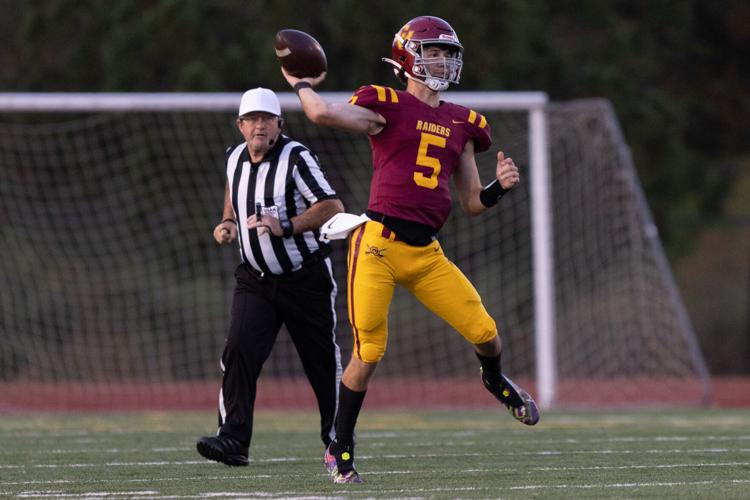 Crescent Valley's Rocco McClave (5) passes against Corvallis in a September game. McClave would go on to set state single-game records for passing yards and touchdowns in the final game of the season against Dallas.

Crescent Valley's Rocco McClave (5), talks with his father and Raiders coach Andrew McClave in the final minutes against Corvallis.

Crescent Valley quarterback Rocco McClave (5) gets a hug from his sister, former CV athlete Cali McClave, after the game against Corvallis.