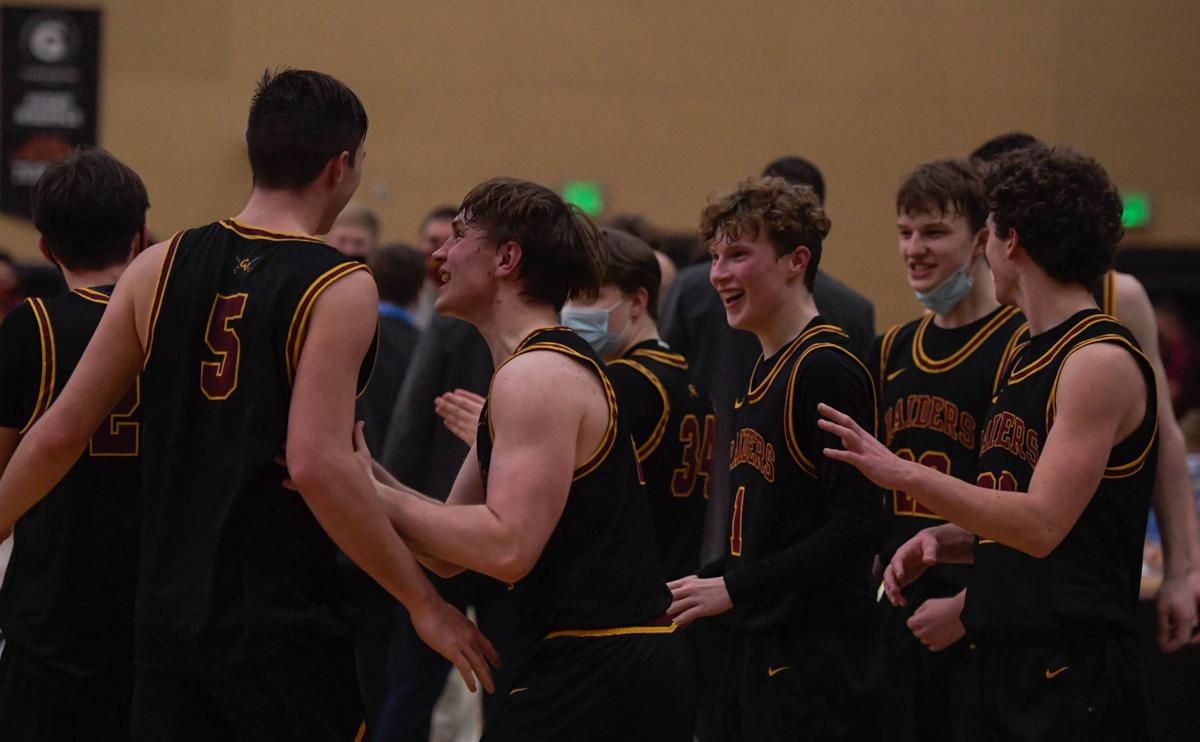 Jake Leibelt (5) and Crescent Valley players celebrate their win over Corvallis on Thursday. Leibelt had a team-high 17 points. 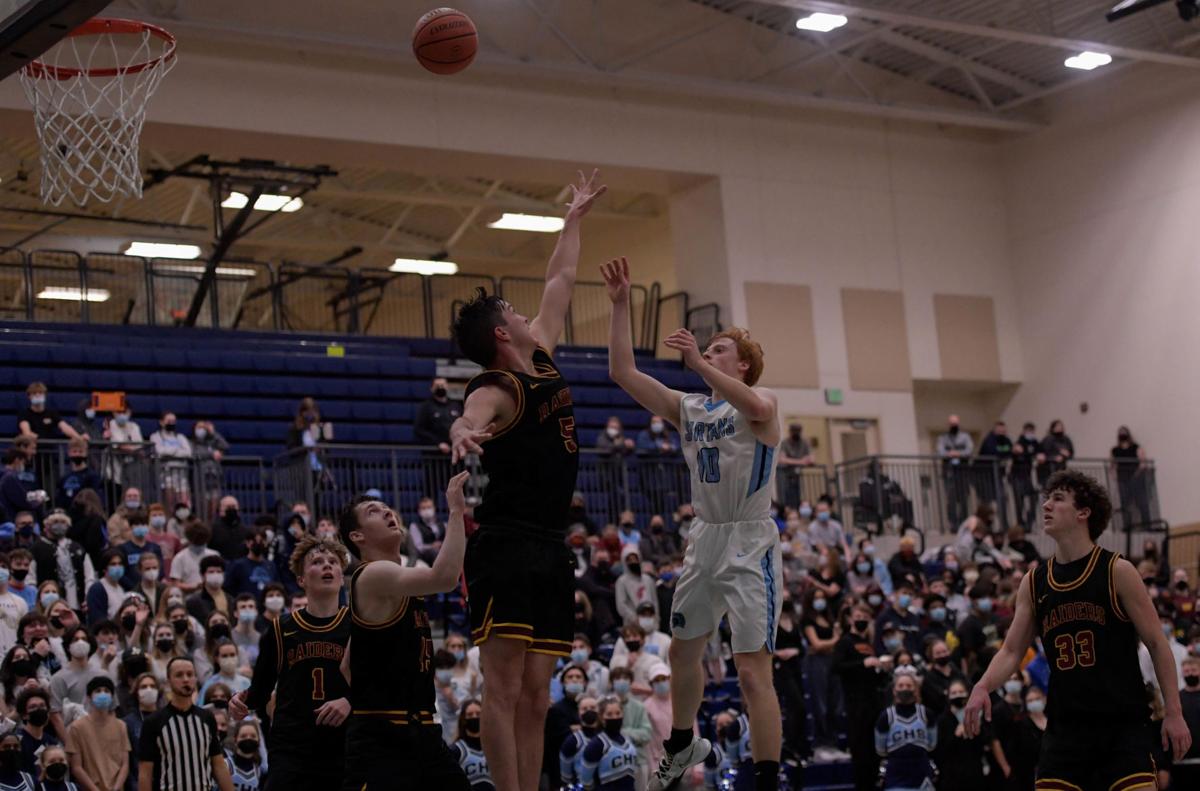 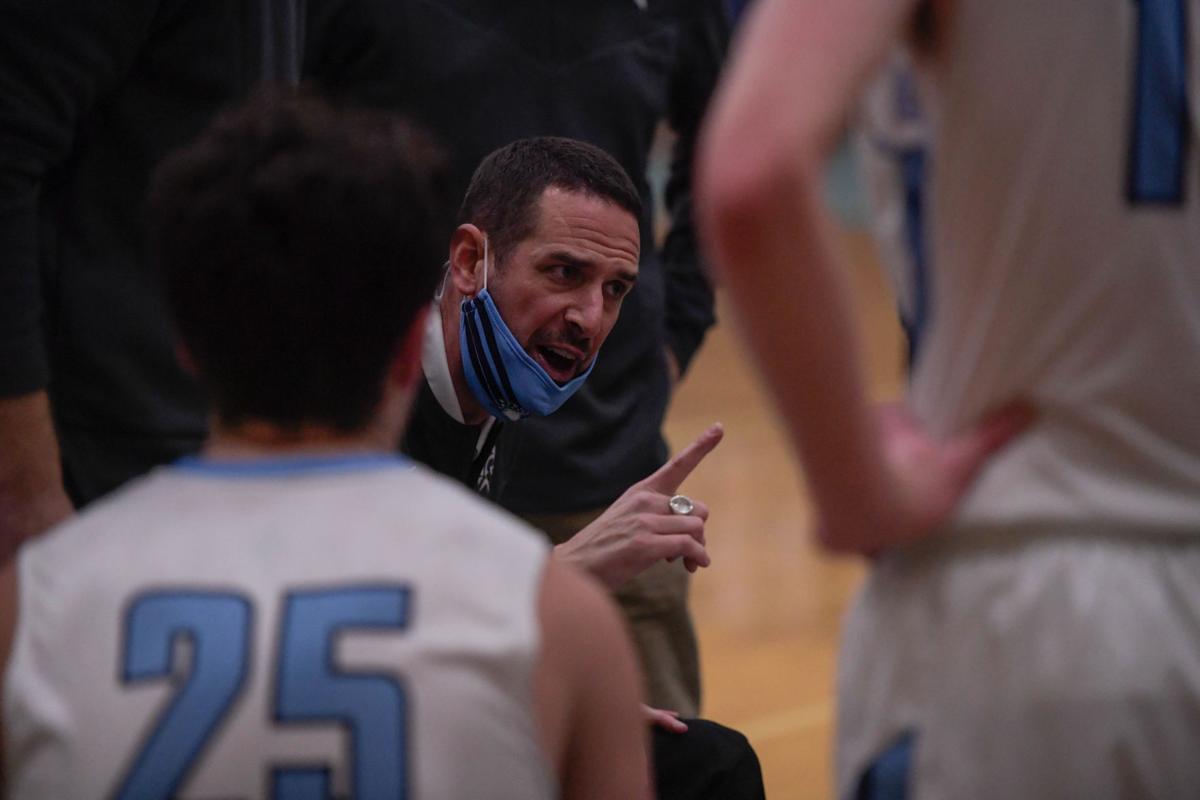 Corvallis head coach Ross Duerfeldt talks to his team during a timeout.

In a wild, back-and-forth game that wasn’t decided until the final minute, Crescent Valley High had the ball right where it wanted it: in possession of standout senior Noah Dewey.

Dewey’s tie-breaking 3-pointer with 20 seconds remaining Thursday night lifted the third-ranked Raiders to a 51-47 win at No. 9 Corvallis in a Mid-Willamette Conference boys basketball game.

The host Spartans put the pressure on in the final period and took the lead, but Dewey and senior teammate Jake Leibelt made some big plays down the stretch.

“We faced a lot of adversity. Every time they made a run we came back, we answered. That was a key thing in our win,” said Dewey, a four-year varsity player who said he felt no nerves with the game on the line. “I always like getting the ball in my hands because I have confidence in the past few years. I have a lot of experience.”

A 9-1 Corvallis run in the fourth quarter — with six points from Karsten Sullivan and an Owen Sahnow 3-pointer — put the Spartans back ahead 43-40, the home team’s first lead since midway through the third.

CV would come back to tie it twice, the second time on a Leibelt putback with 1:14 left.

Dewey then found space on the right wing to rise up and hit his go-ahead 3-pointer. Kellen Sullivan missed a 3 on the other end and Dewey was fouled, but he missed the front end of a 1-and-1 with 4.3 seconds remaining.

The Raiders intentionally fouled Kellen Sullivan, who made the first foul shot and purposely missed the second. But Leibelt grabbed the rebound and made both free throws to seal it.

“Games like that are the opportunities that help teams get better and help teams potentially win games in March,” CV coach Mike Stair said. “That would have been a tough one to lose. I know we would have gotten better from it. But to pull off that win, I know it will pay dividends as we get into the playoff environment.”

Leibelt had a team-high 17 points for the Raiders, who also got 12 from David Marshall and 10 from Dewey. Karsten Sullivan had 20 points, Kellen Sullivan 10 and Nate Thompson seven for the Spartans, who hung in despite being outsized by a significant margin.

Corvallis puts an emphasis on defense and rebounding, which had the Spartans within reach at the end. Corvallis forced 22 Raiders turnovers, including 13 in the first half, to the Spartans’ 11.

“All our guys did was say, ‘OK, there’s not a magical seven-point shot. All we can do is go and get this one possession at a time,’” Corvallis coach Ross Duerfeldt said. “They put their heads in and work. This group is … they do that, they do it for the guy next to them. They do it for each other. We said it afterward, they’re going to be in the right spot at the right time when the season ends.”

The win keeps the Raiders undefeated in conference play along with No. 2 Silverton (8-5, 4-0). The Foxes host the Raiders on Jan. 24 for the first of two regular-season meetings this season.

Crescent Valley ended the first with a 9-0 run to close within 14-12, answering a 7-0 Corvallis spurt earlier in the quarter. The Spartans then opened the second with a 7-0 run and led 26-21 at halftime after CV’s Rocco McClave sank a three-quarters court heave at the buzzer.

The Raiders scored the first 12 points of the third quarter, one that has occasionally bit the Spartans this season. Leibelt had five points, including a 3-pointer, in that run.

Thompson hit Karsten Sullivan for a layin as Corvallis closed the gap to 35-30 at the end of the third.

Crescent Valley has wins this season against 5A No. 5 Churchill and No. 6 Redmond and 4A No. 3 Marshfield.

Stair said his squad has developed into a good shooting team and is relatively unselfish with the ball. The Raiders are a good defensive team, the coach said, but inconsistent.

He wants his team to be more physical on both ends of the court, and he believes an inside-out game offensively could help make his team even better.

“I like where we are. I think we’re doing pretty well. But we have a pretty high ceiling,” Stair said.

Crescent Valley High had just enough answers for a Corvallis squad that would never go away.

Finally, a matchup between two of the top teams in the conference.

OSU men's basketball: Heartbreaking loss the result of more than a missed layin

Oregon State’s two-point loss to rival Oregon on Monday night came down to much more than just Warith Alatishe’s point-blank miss at the buzzer.

Gary Payton II has long been known as a defensive stopper without much offensive game.

OSU men's basketball: A look at the opponent — UCLA

Oregon State tries to get a road split Saturday night when it heads to third-ranked UCLA. Here’s a look at the Bruins.

Kellen Sullivan had 19 points Monday to lead Corvallis High to a 54-50 win at West Albany in Mid-Willamette Conference boys basketball.

Arizona and Oregon both made statements last week to their peers in Pac-12 men’s basketball. The Wildcats and Ducks aren’t going anywhere.

Jake Leibelt (5) and Crescent Valley players celebrate their win over Corvallis on Thursday. Leibelt had a team-high 17 points.

Corvallis head coach Ross Duerfeldt talks to his team during a timeout.