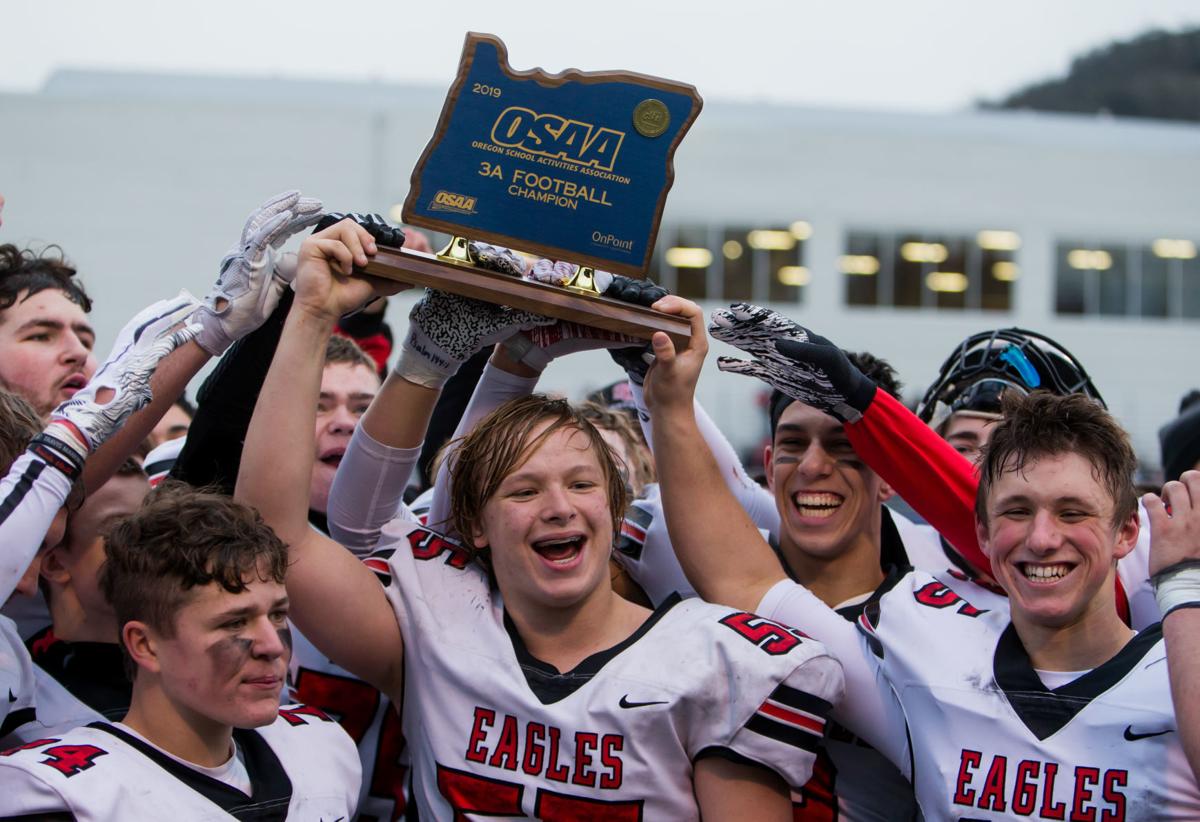 Santiam Christian players hoist the trophy after putting together a game-winning defensive stand to hold off Hidden Valley 41-34 for the 3A state title. 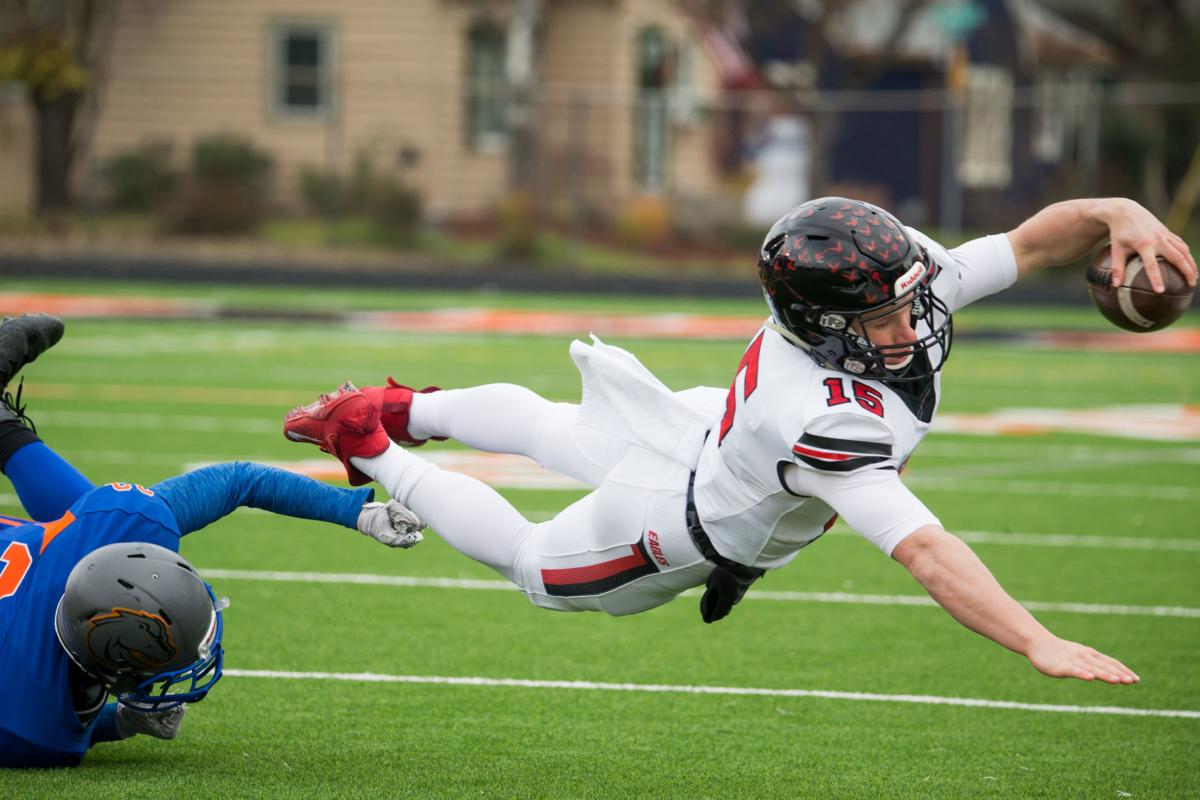 Santiam Christian quarterback Ely Kennel dives out of bounds to stop the clock with one minute left in the second quarter. 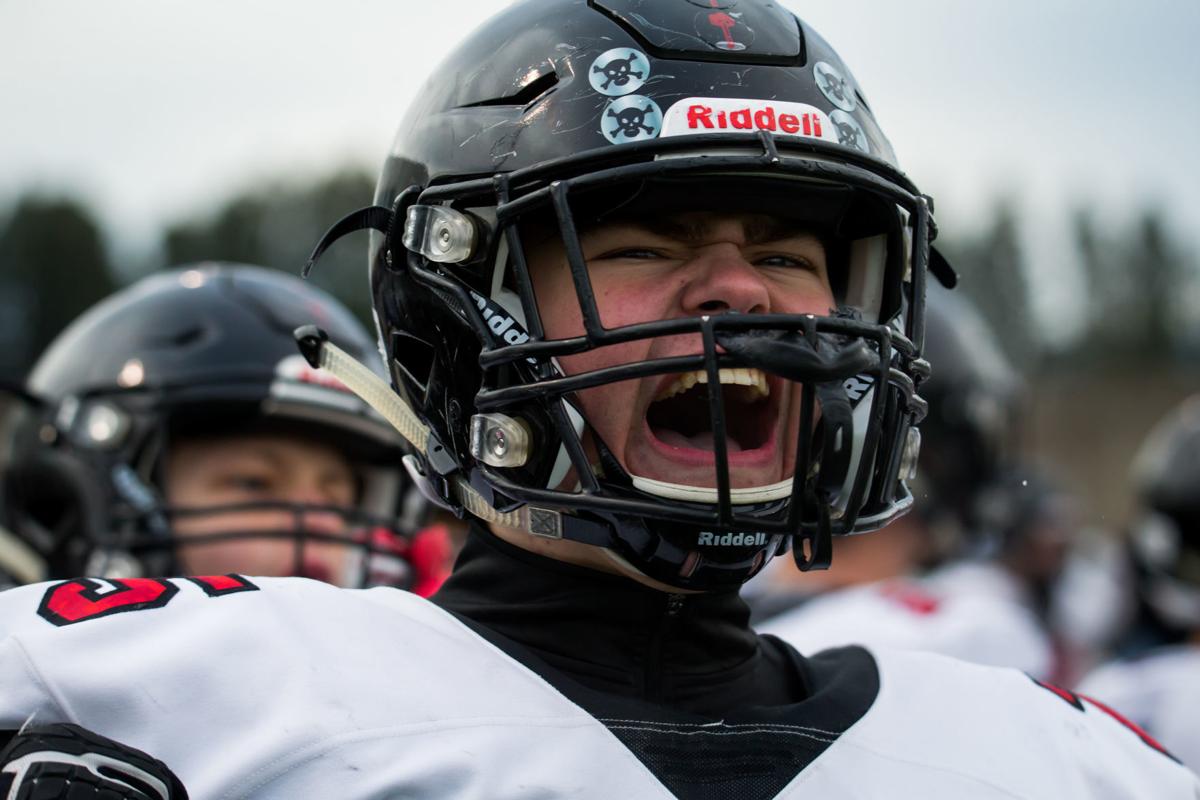 Campbell Henderson celebrates after Santiam Christian forced a fumble on the kickoff after the game tying touchdown, to give the Eagles the ball back with a minute left and a chance to retake the lead.

ROSEBURG — All season long, the Santiam Christian football team has cruised past its opponents, rarely facing a team that challenged it for more than a quarter or two.

So on Saturday, when the Eagles found themselves in a shootout with a state title on the line, they were very much in uncharted waters. But instead of panicking, they went blow-for-blow with the best offense in the state and emerged as the last team standing.

SC topped Hidden Valley 41-34 to capture the 3A state championship at Roseburg High School and secure its second title in school history. The win, which caps off a perfect 13-0 season, was the only game the Eagles played all season that they did not win by at least 11 points.

Trailing in the fourth quarter for the first time all year, SC rode its pair of go-to playmakers in Marcus Fullbright and Ely Kennel and delivered a dramatic comeback.

Fullbright led the way for the Eagles, rushing for 198 yards on 28 carries. He scored five touchdowns on the ground, including the go-ahead score with one minute, six seconds to go.

The Eagles were knocked out in the first round of the playoffs last season and last to Cascade Christian in the title game the year before. Fullbright said he watched his brother, Christian, miss out on a state title during his final season at SC and used that as motivation on Saturday.

“I just told myself I have to go get it now,” Fullbright said. “I have to finish what he started.”

Sophomore quarterback Ely Kennel finished with 138 yards on 15 carries and also passed for 100 yards, and senior Luke Mehlschau led the Eagles on defense with 10 tackles, a sack and a forced fumble.

All afternoon long, SC had to contend with a Hidden Valley offense that led the state in scoring with 618 points. They put their high-powered spread look on display Saturday as quarterback Sam Vidlak went for 479 yards on 39-for-55 passing and three touchdowns. The Eagles found a way to neutralize the Mustangs’ running game and held them to 66 yards on the ground, but wideout Jeremiah Noga torched them for 270 yards on 18 catches.

“They were really the first heavy passing team we’ve played this year,” Mehlschau said. “We’ve played a couple of okay other ones, but they had a really good, solid quarterback. That guy is no joke.”

The Eagles took a 20-7 lead midway through the third quarter, but the Mustangs delivered two unanswered scores to tie the game at the start of the fourth. SC, though, needed just three plays for Fullbright to respond with a 53-yard touchdown of his own and retake the lead.

Hidden Valley didn’t blink and marched 71 yards on five plays, scoring on a dazzling cross-field throw from Vidlak to his brother, Nate Vidlak, in the back of the endzone.

On SC’s next drive, the Mustangs tipped a pass from Kennel into the air and Nathan Bragg pulled down an interception. It took just five plays for Hidden Valley to then move 50 yards and score to take a 34-27 lead with 5:08 left in the game.

That meant for the first time all season, the Eagles would need to orchestrate a come-from behind win.

“I’m starting to get nervous at that point,” Kennel said. “But then I realized that all we can do is move forward and all we can do is keep competing. Those are the most fun games, when you have to come back like that.”

The two teams traded punts on three-and-out drives, then with 3:04 to go, Kennel seized control of the game. The sophomore QB took a read option to the left side and appeared to be out of room as he approached a crowd of Mustang defenders. But he slipped free and darted up the left sideline, untouched, for a 53-yard score that tied the game at 34-34.

“He’s incredible, absolutely incredible,” Fullbright said of Kennel. “It started last year when he became the leader of this team. The fact that he’s still just a sophomore, it’s crazy.”

The Eagles then forced a fumble on the ensuing kickoff and Seth Austin dove on the loose ball, recovering it and gifting SC the ball back on the Mustangs’ 20-yard line. In a seven-play drive filled with penalties by both teams, the Eagles finally punched in the go-ahead score on a 1-yard plunge by Fullbright to take the lead for good.

The Mustangs had one last shot to draw even and they moved the ball down to the Eagles’ 25-yard line with 12 seconds to go. But a holding call moved them back to the 45, and Garrett Cowan burst through for a sack on the final play of the game to put any hopes of a Hidden Valley comeback to rest.

“When Hidden Valley took that lead, that would be an easy time to think, ‘Oh no, this things over,” SC coach Matt Bain said. “But these guys just kept battling. I’m really proud of them; they didn’t quit and they didn’t give up. They showed a lot of heart and character.”

A fall to remember with five title teams

Led by an ultra-talented group of underclassmen, the Corvallis High girls cross-country team captured its first ever state title in the fall. …

Santiam Christian players hoist the trophy after putting together a game-winning defensive stand to hold off Hidden Valley 41-34 for the 3A state title.

Santiam Christian quarterback Ely Kennel dives out of bounds to stop the clock with one minute left in the second quarter.

Campbell Henderson celebrates after Santiam Christian forced a fumble on the kickoff after the game tying touchdown, to give the Eagles the ball back with a minute left and a chance to retake the lead.