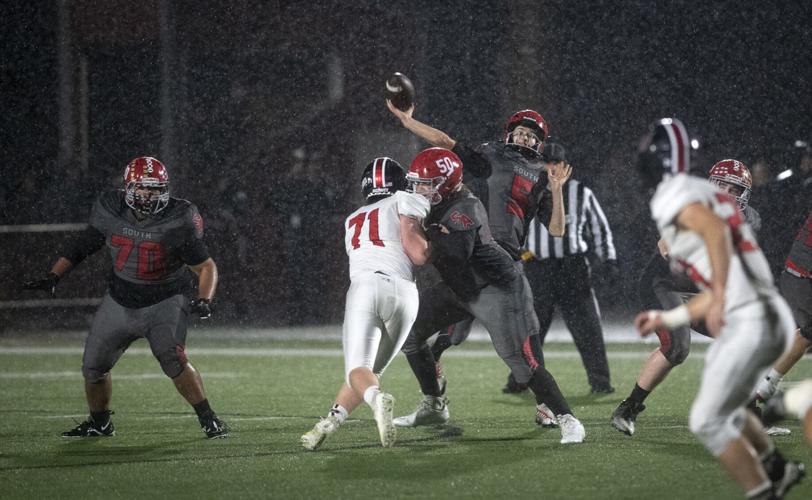 South Albany quarterback Kaden Younger throws a pass during the RedHawks' state playoff victory over Mountain View. Younger was one of five senior starters on the South Albany offense. 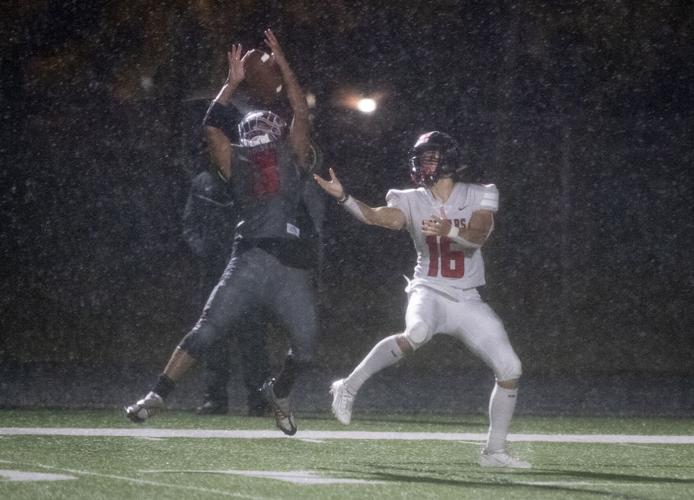 South Albany cornerback Jr Vasquez breaks up a pass intended for Mountain View's Greyson Harms. Vasquez is one of three juniors who started for the RedHawks on defense this season.

The South Albany High football team played 10 games this season and six of them were against teams that made it to the 5A state playoffs. The RedHawks went 3-3 against playoff teams and 7–3 overall, with their season ending last Friday with a loss in the state quarterfinals at Bend.

Co-head coach David Younger is proud of the way the team competed in those games and in particular he liked the way the team rebounded after regular-season losses at Silverton and at West Albany.

The week after the loss at Silverton, South Albany shut out Lebanon 21-0. After the loss to the Bulldogs, the Redhawks won three games in a row, including a tough 29-26 win at Dallas.

“I look back and I thought about it a lot this past weekend, how competitive our kids were and how they responded after losses by coming back to practice after a loss and not being satisfied,” Younger said. “The losses, it hurt for a little bit, but we got back to the practice field on Monday and saw how those kids were competing. We got right back on track after losses and played some really good football games.”

“It was definitely a historical season for us. Having this senior class go through the COVID season being 0-6, being able to get a share of the league title is a pretty big accomplishment in a short period of time,” Louber said.

The 2022 RedHawks did have a senior-heavy lineup, especially on defense. Eight of the 11 defensive starters were seniors, beginning with four-year starters Maxwell Louber (linebacker) and Howard Yost (defensive end). Yost was part of an all-senior defensive line alongside Jack George and Jaden Pang.

At linebacker, seniors Max Williams, Jesse Bass and Louber were joined by Anthony Vestal, a junior.

The secondary had two senior starters in safeties Jedediah Kollaer and Keegan Turcotte. Cornerbacks Jr Vasquez and DeShawn Gilliam are both juniors and will provide stability next year for a defense that will lack experience overall.

Gilliam was a unanimous first-team all-Mid-Willamette Conference pick this season, one of just five players to earn that honor. And Vasquez made a big impression in his first year as a starter, Louber said.

“He stepped in and did a tremendous job, one of the most sure tacklers that we had. His contributions were a little bit under the radar. He was definitely an anchor for us,” Louber said.

In addition to the three junior starters who will return, sophomore linebacker Andre Stitt earned a lot of playing time.

“He would come in and spell Bass and Louber when they needed breaks and he came in and didn’t skip a beat. I’m really super-excited about what this kid is going to contribute to our program in a few years,” Louber said.

The offense was more balanced between seniors and players who will return. The RedHawks started senior quarterback Kaden Younger and center Adam Halberg. Three other seniors were two-way starters with Maxwell Louber starting at fullback, Bass at right tackle and Kollaer at running back.

The RedHawks will return three starters on their offensive line: Canaan Caspino (right guard), Hudson Gould (left tackle) and Mitchell Fouse (left guard). Vestal will be back to fill one spot at running back and Gilliam and Vasquez will return at wide receiver.

“He’s just very strong. He’s such a nice kid but he plays the game angry. Not that he’s mad at anyone, he just understands that’s how he’s going to be successful. He’s great in short yardage, but he’s a threat to break one,” Younger said.

Junior Cameron Bylund was the backup quarterback this year and Younger said he did a good job running the scout offense. Like all other positions, there will be competition at that spot next summer before a starter is named, Younger said.

“I expect Cameron to compete hard and do a good job,” Younger said.

While there will be lots of roles to fill, both coaches said one benefit of having such an experienced team this year is that younger players were able to develop on the JV2 team, a luxury the program hasn’t always had.

“We’re really excited about our JV 2 program. We only lost one game this season. It was nice we didn’t have to play a lot of kids up. They got a lot of experience,” Louber said.

When South Albany faces off against Bend on Friday night in the quarterfinals of the 5A state football playoffs, it will be a matchup of two t…

South Albany quarterback Kaden Younger throws a pass during the RedHawks' state playoff victory over Mountain View. Younger was one of five senior starters on the South Albany offense.

South Albany cornerback Jr Vasquez breaks up a pass intended for Mountain View's Greyson Harms. Vasquez is one of three juniors who started for the RedHawks on defense this season.