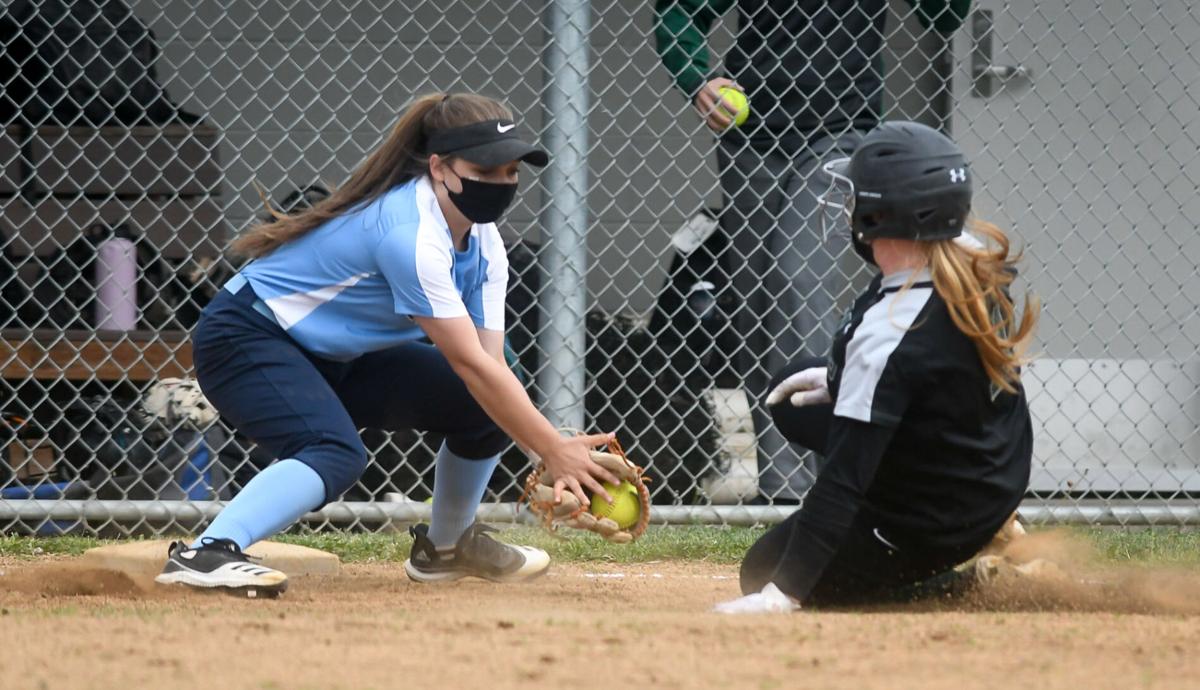 The Spartans' Jada Bratsouleas tags out West Salem's Shelby Chapman at third base in the fourth inning in one of the game's key plays. 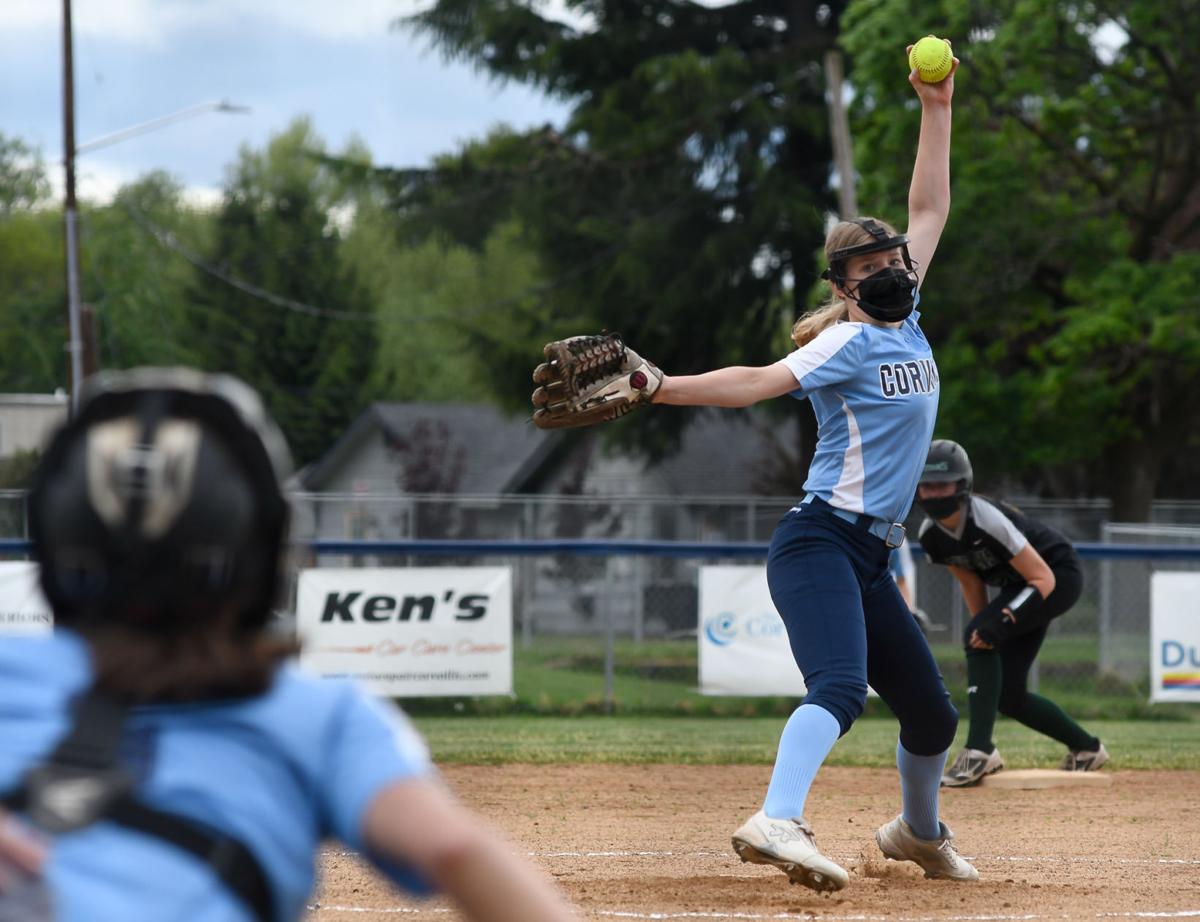 Corvallis pitcher Holland Jensen gave up seven hits, struck out three and walked none Monday in the Spartans' 4-1 victory over West Salem. 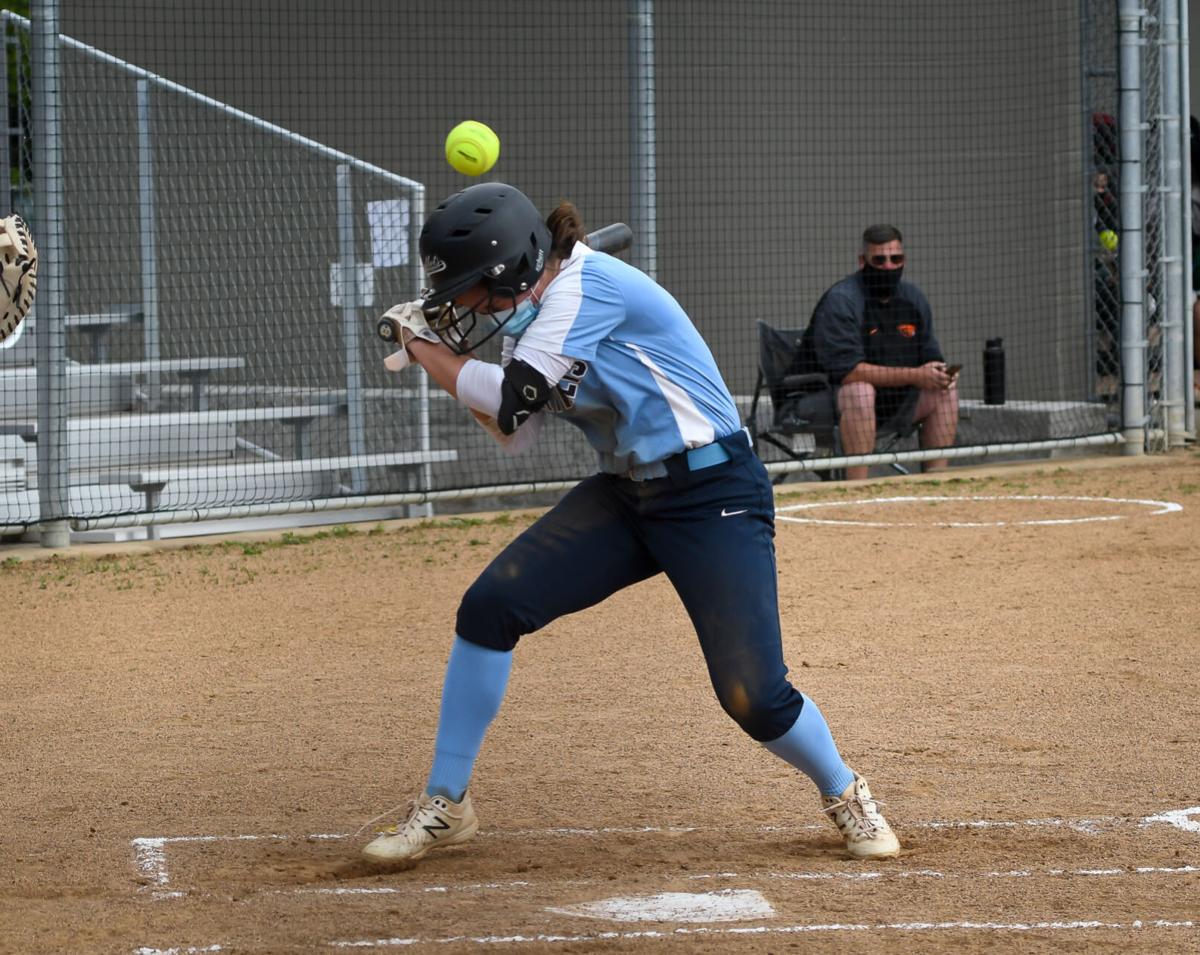 The Spartans' Sydney Conklin was hit with a by a pitch with the bases loaded in the first inning for the first of her two RBIs.

Holland Jensen found herself in numerous pressure situations Monday afternoon as West Salem High put runners on base and threatened to add some crooked numbers on the scoreboard.

But more often than not, the Corvallis freshman and her teammates got the better end of those scenarios with Jensen’s calm demeanor and the Spartans’ defense leading the way.

Jensen came through with flying colors in the circle and at the plate as Corvallis held on for a 4-1 win in a nonconference softball game at Will Keim Field.

“I do get nervous a little bit, but I know that I have a got a good defense and that helps, especially in that game,” she said. “I knew that they were there, so I just hit my spots.”

Two plays in particular kept the Spartans (7-3) in control after jumping out to a 2-0 first-inning lead on the Titans (6-4).

But Corvallis right fielder Kaylee Pickering dived to catch a low, well-hit liner. She then popped to her feet and threw to third base to get a runner trying to advance, completing the double play and ending the threat.

“That was insane. We were all hyped for her, especially because she hasn’t been getting to play a lot … and we were really proud of her,” Spartans senior Ruby Krebs said of the freshman. “As soon as it left her hand, I was like ‘oh my god, that was the best play by far this season.' It was awesome.”

The Titans again had two runners on with one gone in the fifth, this time at second and third.

Jada Bratsouleas, playing third base, fielded a grounder and looked to throw to first but then noticed the runner at third was several steps off the bag. In the meantime, shortstop Sydney Conklin had moved to cover third, and Bratsouleas’ toss was in time to pick off the runner.

Jensen then got the next batter to pop up in the infield.

“It’s grown a lot from game one to now. We’ve seen a ton of growth in both being comfortable playing defense and also thinking ahead and making good decisions,” she said. “It’s nice to see Holland feeling confident that like, ‘if I do my job and throw strikes I have people behind me.’”

Arnst, the team’s co-head coach along with Karmen Tessier, said during COVID it’s difficult to replicate game situations in practice. But time is spent discussing how to deal with runners on base and making decision, not simply just taking ground balls.

Corvallis scored its first two runs on Piper Love’s RBI single and Conklin being hit by an Aliyah Wilsey pitch with the bases loaded. In the fifth, after Love’s two-out single, Conklin doubled to center to bring the runner all the way around for a 3-0 lead.

West Salem scored in the sixth, as a runner narrowly beat out a throw by Conklin from one knee on a play that would have resulted in the third out but instead put the Titans on the board.

Corvallis got the run back in the bottom half after Bratsouleas’ leadoff fly ball to center couldn’t be caught and Holland Jensen doubled her home with two outs.

There is a youth movement taking place for the Spartans this spring. Three sophomores (Maya Ortiz, Ava Prechel and Hannah Jensen, Holland’s sister and battery mate) and two freshmen (Holland Jensen and Pickering) all started Monday for a team that’s third in the Mid-Willamette Conference at 3-3.

“They’re really poised and show strong leadership, even as freshmen and sophomores,” Tessier said. “They’re not afraid to be the leader and take charge and show the energy. That’s nice to see.”

In the center of that surge are the Jensen sisters. Hannah has been catching for Holland for as long as they’ve been playing softball.

Tessier and Arnst know all about that kind of connection. They played three seasons of softball together at CHS, with Tessier a pitcher and Arnst a catcher.

Arnst says Hannah is comfortable because she knows how her sister’s pitches move.

“And more confidence (for Holland) as a pitcher because you trust that person because they know what to expect from you,” Tessier said.

Arnst added that the team has been blessed with Hannah Jensen and Love as catchers because they already know how to be good battery mates.

Holland Jensen, who said her curveballs and change-ups were working well, allowed seven hits, struck out three and walked none in a complete-game effort.

All while showing no outward signs that she was performing under tense circumstances.

“Holland is very stoic. Sometimes it’s hard to remember that she’s a freshman in terms of how she holds herself and not a lot rattles her,” Arnst said. “I think that’s come with a lot of hard work with Karmen, developing as a pitcher, playing in lots of games before high school, to where it’s just another game and she’s pretty relaxed.”

The Spartans' Jada Bratsouleas tags out West Salem's Shelby Chapman at third base in the fourth inning in one of the game's key plays.

Corvallis pitcher Holland Jensen gave up seven hits, struck out three and walked none Monday in the Spartans' 4-1 victory over West Salem.

The Spartans' Sydney Conklin was hit with a by a pitch with the bases loaded in the first inning for the first of her two RBIs.