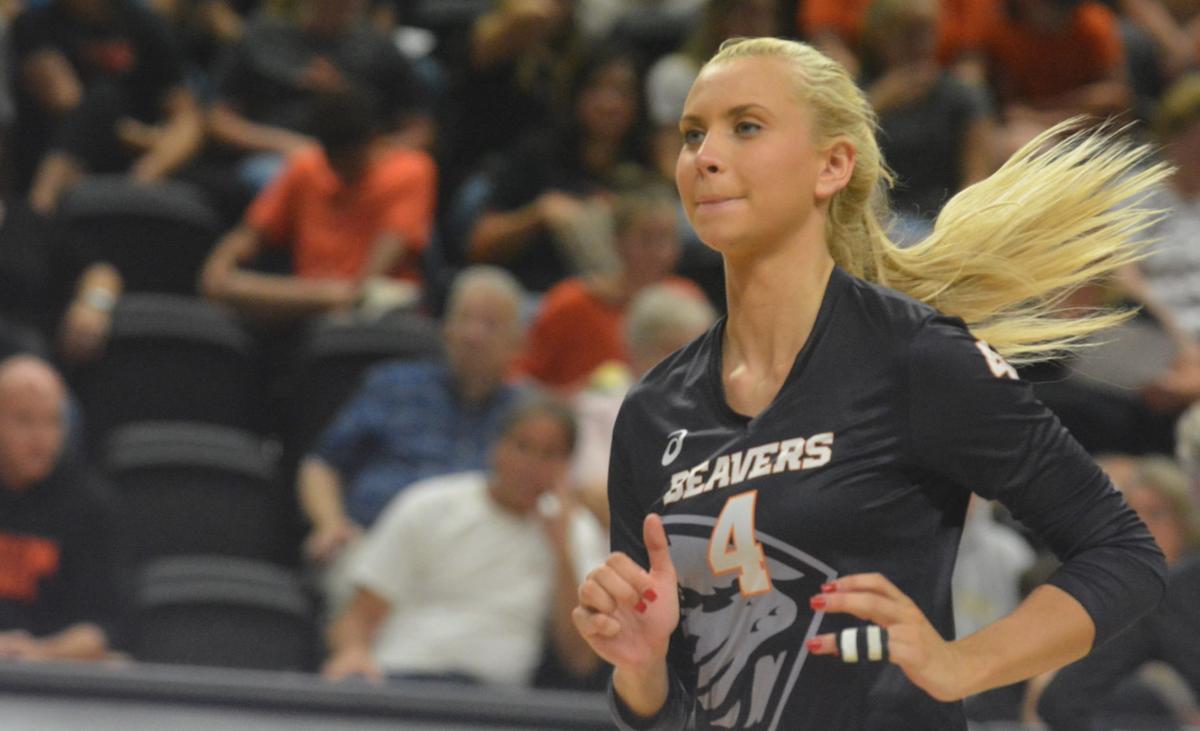 Philomath High grad Haylie Bennett is a senior in her fifth year on the Oregon State volleyball team. Playing next fall, should this season be lost, would be difficult for her, Bennett said. 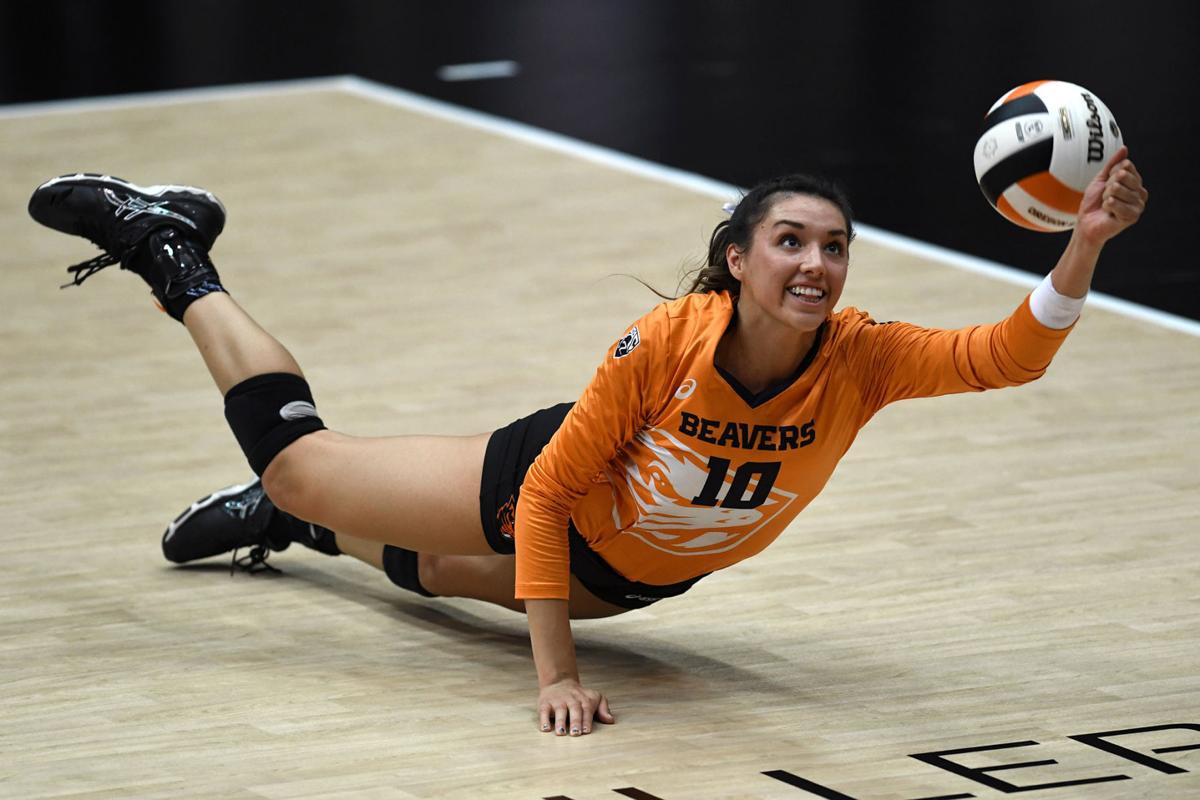 Oregon State senior Maddie Goings says taking a redshirt in order to play a full season next fall is an option.

Haylie Bennett and Maddie Goings are hopeful for what could be salvaged of the upcoming volleyball season as the coronavirus continues to take its toll.

The Oregon State seniors, like all college athletes at this point, are waiting for the news that will tell them whether a season will be played this fall, possibly be pushed to the winter or spring or even be wiped out altogether.

There are many layers of decision-making, including for the athletes themselves.

Bennett, a right side from Philomath, is in her fifth year in the program and used her redshirt as a true freshman in 2016. Returning to the Beavers next fall gets complicated because she’s on track to graduate with a kinesiology degree in December and would need to find a master’s degree to pursue.

Goings, an outside hitter and right side from Aledo, Texas, has her redshirt available and is waiting to see what this fall becomes before making a decision. Delaying her senior season until next fall would mean more time to rehab recurring shoulder problems and likely ensure a full schedule, which won’t happen this fall after the Pac-12 Conference earlier this month eliminated nonconference competition for its schools.

Playing their senior season is important to both Bennett and Goings. But it involves a challenging situation that likely wouldn’t involve their friends and family in attendance should matches be played this fall.

“I want to step on that court with my teammates for one last season,” Bennett said. “But I also want everyone to remain safe and healthy, and I don’t want to put other people and other family members at risk.”

The immediate future of college athletics remains uncertain and the resiliency of all is being tested.

Beavers volleyball coach Mark Barnard said he and his staff have vital roles in trying to stay positive for their players. His frustration is that he has minimal good information on the situation to give them.

“I think that’s of the utmost importance because they’re looking to you for some kind of direction,” Barnard said. “That’s just the way it is. The coach has the answers. Unfortunately in this case, the coach doesn’t have a lot of good answers.”

The players, while not seeing many of their teammates for an extended time, have stayed connected through video conference meetings and text messages. Individual workouts, with guidance from the coaching staff, are the norm as they trudge forward.

“I think we’ve all tried to keep our heads up during the situation and kept each other motivated,” Goings said. “We’re kind of preparing like we’re going to have a season, because we don’t know but we want to be ready to go if we do know if it’s a possibility.”

Bennett and Goings say Oregon State has done a good job of quickly passing on news they receive that’s pertinent to the athletes. That information has included steps needed to adjust to new rules and protocols. Everything related to a daily schedule has so far has eliminated or delayed regular activities.

“I feel really safe how we’re going about everything. They know if there’s a hiccup in the step we’re going to have to slow back down,” Goings said.

For volleyball, an on-time start to fall practice and the first opportunity to work as a team, at least in small groups, would come the second week of August. Barnard doesn’t expect it to happen that soon.

OSU volleyball players have been able to work out in the university’s P. Wayne Valley Sports Performance Center, doing conditioning and weightlifting, while wearing masks. They’re also being tested for coronavirus and having physical exams, Goings said.

The nonconference provides competition against teams outside the Pac-12, annually one of the top volleyball conferences in the country, and live-action to develop players and team chemistry.

“That preseason, that’s an important part of the year,” Barnard said.

The NCAA has reduced the minimum number of matches required to be played from 19 to 10. The Pac-12 has played at least 20 conference matches since it expanded to 12 schools in 2011.

The lack of team-related summer activities — working youth camps on campus and participating in open-gym sessions among them — has allowed Bennett to spend more time with her family, which she says is fun.

Goings said it’s been “kind of crazy” the last few months given all the uncertainty. But of time spent at home in Corvallis finishing spring term and doing workouts, she says “it’s been a pretty good, relaxing time to self-reflect.”

She recently moved in with two members of the men’s golf team after living with two teammates. Goings said having those peers around her has been a plus.

“It helps a ton because we’re able to lean on each other, relax with each other and talk about all the possibilities that could be happening this season,” she said.

Barnard says his players have handled the significant disruption the best that they can. Because everything is changing so quickly, you have to be good at being resilient, he said.

Living one day at a time is stressed in all walks of life.

“This is actually one of those situations where it’s all you can do,” Barnard said, “and if you do it in any other manner you’re going to struggle.”

The collegiate swimming careers of longtime friends Lucie Davis and Lauren Yon have each taken sideways turns the past 18 months.

Oregon State men’s basketball will get back in its practice facility for team workouts Monday, the first day such activity is permitted by the NCAA.

Philomath High grad Haylie Bennett is a senior in her fifth year on the Oregon State volleyball team. Playing next fall, should this season be lost, would be difficult for her, Bennett said.

Oregon State senior Maddie Goings says taking a redshirt in order to play a full season next fall is an option.