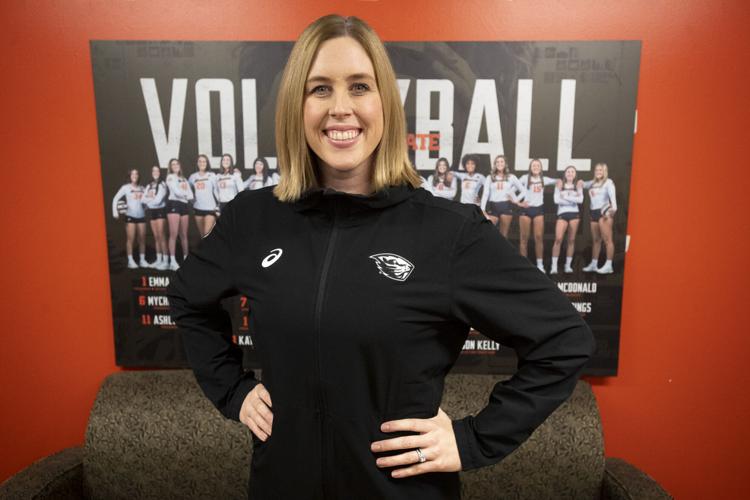 New Oregon State volleyball coach Lindsey Behonick spent the last 10 years at the University of Pittsburgh and helped guide the Panthers to the Final Four in 2021 and 2022. 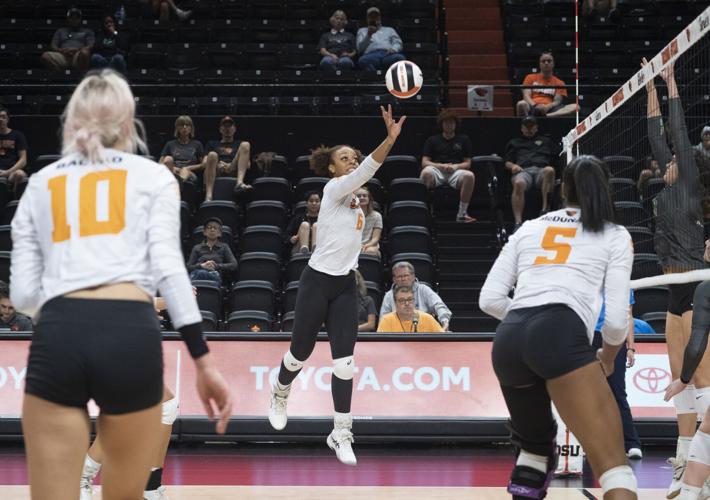 Mychael Vernon, center, led Oregon State in kills in 2022. The team is just starting to learn a new system under Behonick.

Scott Barnes spent one year as the athletics director at the University of Pittsburgh before coming to Oregon State to fill that role in 2016.

During that time, he made a positive impression on Lindsey Behonick, an assistant volleyball coach at Pitt. That relationship made a difference this winter as Oregon State was conducting a nationwide search for a new head volleyball coach following the retirement of Mark Barnard.

For Behonick, the opportunity to work with an athletic director she already knew made her decision much easier and she accepted Barnes’ offer to take over the program.

“I just knew kind of what Scott was doing with this program and the people that he was bringing with him,” Behonick said.

She kept an eye on Oregon State under Barnes’ leadership and noticed that teams were having success in a wide range of sports.

“Every team makes the postseason. There’s some success happening in Corvallis, Oregon,” Behonick said. “For some reason this has always been a school where I felt if it came open, I would want to come.”

Pitt has become a national power in volleyball, reaching the Final Four in 2021 and 2022 under head coach Dan Fisher. Behonick has been part of this emergence, serving as an assistant coach at Pitt for the past 10 years.

She thanked Fisher for being willing to let her learn every aspect of leading a team and not limiting her to any specific role during her time at Pittsburgh.

“I always knew I wanted to be a head coach. … I realized there was a lot more to coaching, being a head coach, than just doing Xs and Os on the court,” Behonick said. “Over my time at Pittsburgh, Dan Fisher has been a great mentor and he’s been somebody that allowed me to grow in different areas.”

Behonick grew up in Southern California and played at Concordia University Irvine. She has two cousins who are Oregon State alumni and still live in the state so this move allows her to be closer to them and to her family in California.

The job also provides an opportunity to coach in the Pac-12 Conference.

“It’s a very volleyball dominant conference. That’s been something that’s a big draw and I think what’s great is with the transition of the Pac-12 — USC and UCLA leaving, some coaching changes — I think the conference is up for grabs and (there’s) a chance to make the tournament,” Behonick said. “You’re playing good teams to prepare you for a tournament run.”

Behonick is just starting to get to know the players on the current roster. Among the top returning players, outside hitter Mychael Vernon had a breakout season for the Beavers in 2022 and led the team in kills. Middle blocker Aliyah McDonald made a successful return from injury and fellow middle blocker Kinley Swan was named to the Pac-12 all-freshman team.

Behonick is currently limited to just four hours of coaching with the team each week, but she has already started putting in her program. She said her approach is highly structured.

“I’m someone that wants to teach the all-around game,” Behonick said, so right now everybody is working on everything, which she believes will make them better players down the line.

“I want to see a team that consistently puts pressure on the opponent. So we’re gonna hit a lot of balls hard and I’m someone that doesn’t care if we get blocked 20 times in a match. I’d rather get blocked than just whale balls out of bounds,” Behonick said. “I want to have great defensive intensity where it’s going to be really, really hard for teams to get kills, too.”

Behonick is in the final stages of putting together her coaching staff and hopes to begin announcing those hires in the next week. Her ties to California will certainly be helpful in recruiting the West Coast, but she said her assistants will have connections all over the country.

“I want to recruit the best players. I don’t care where they’re from, as long as they’re good humans, good volleyball players, they’re going to buy into the culture that I’m creating here, then I’m going to recruit you,” Behonick said.

OSU volleyball: Barnard will not return as head coach

Oregon State volleyball head coach Mark Barnard will step down from that position at the end of the regular season, he announced on Wednesday.

New Oregon State volleyball coach Lindsey Behonick spent the last 10 years at the University of Pittsburgh and helped guide the Panthers to the Final Four in 2021 and 2022.

Mychael Vernon, center, led Oregon State in kills in 2022. The team is just starting to learn a new system under Behonick.