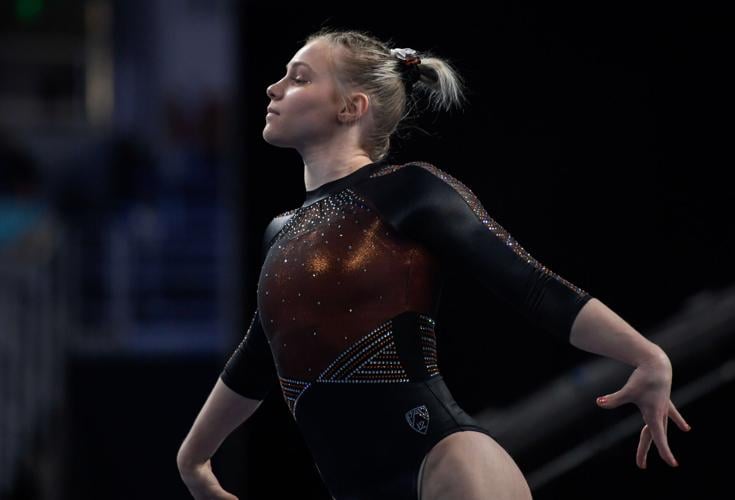 Oregon State’s Jade Carey performs her floor exercise at the NCAA Gymnastics Championships on Thursday, April 14. Carey competed in the all-around as an individual. 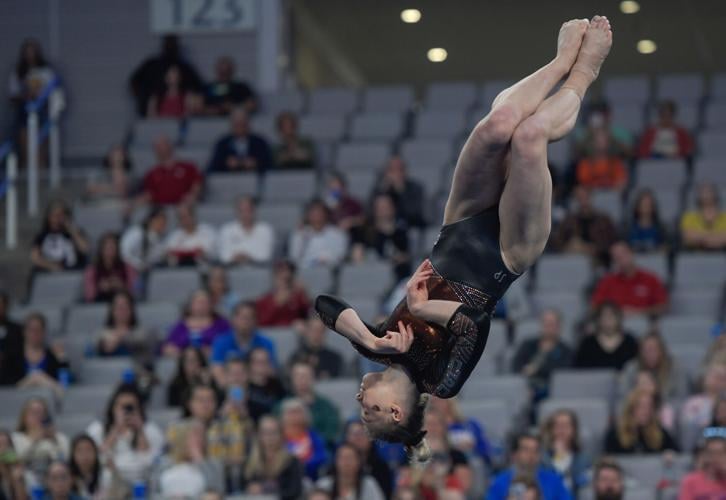 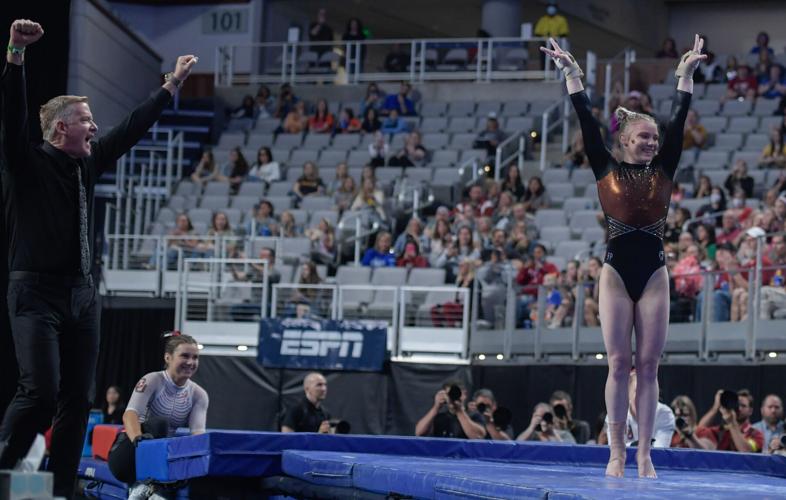 Associate head coach Bryan Raschilla celebrates as Jade Carey lands her vault at the NCAA Gymnastics Championships on Thursday in Fort Worth, Texas.

“It wasn’t my best day, but I feel like I overall did well, and I did exactly what I wanted to. I made all my routines, and I had fun,” Carey said.

While the final score didn’t match Carey’s performance at the Seattle Regional where she won the all-around title and set a new program record with a total of 39.850, it is important to put it in perspective. Prior to this season, an all-around score of 39.650 would have tied for the third-best total in Oregon State history.

Carey began on the vault and received a score of 9.8875, which Oregon State coach Tanya Chaplin questioned.

“She started off with a beautiful vault, so that was the only score that I may have been frustrated with a little bit,” Chaplin said. “But I thought she did a great job all the way through.”

Carey has far too much experience to let the score on one routine interfere with her concentration in the other events.

“Just take it one event and one skill at a time. I tried to put each event behind me and not think about it anymore and just focus on what I had to do on the next event,” Carey said.

Carey bounced back with her best performance of the day, scoring 9.9500 on the uneven parallel bars. At the conclusion of the first session, Carey was in a three-way tie for first place on bars.

“That routine felt really good, especially after the last two meets I haven’t really had my best bar routine. I was excited that that one was back to my normal,” Carey said.

Thomas scored 9.975 on the bars in the evening session to win the event. Carey finished in a five-way tie for second place.

Carey earned a mark of 9.9000 on the balance beam and finished her day on the floor routine, where she scored 9.9125.

As an individual qualifier for the national championships, Carey was paired with Oklahoma on Thursday. She went through warmups and each rotation of the competition with the Sooners.

“It was a lot of fun. It was a lot of fun to be in front of a big crowd again and rotating with Oklahoma was really great. I felt like a part of them, and I really appreciated all of their support today,” Carey said.

Chaplin thanked Oklahoma for being great partners for Carey.

“She did an amazing job for her first time at the championship. It’s hard because you’re here without your team. You’re used to the energy that the team gives you,” Chaplin said. “Oklahoma was very welcoming and we appreciate everything that they did for us and we have a lot of gratitude for that, but it’s still different.”

The afternoon session included Oklahoma, Utah, Minnesota and Alabama in the team competition along with the individual qualifiers. Oklahoma and Utah took the top two spots and advanced to Saturday’s team finals.

Florida, Missouri, Auburn and Michigan took part in the evening session along with individual qualifiers. Florida and Auburn advanced to the finals.

But the individual all-around championships as well as the four event titles are determined based solely on Thursday’s competition. Thomas won the floor exercise with a perfect 10.0, Lee won the beam with a score of 9.9625 and Utah's Jaedyn Rucker took the vault with a mark of 9.9625.

“It’s phenomenal, and she’s had an incredible year. I’m so happy for her that she was able to come in here and have that consistent performance. Her bar routine was beautiful,” Chaplin said, adding that while Carey competed as an individual, she was also representing her teammates who worked alongside her all season. “It means a lot to the entire program.”

Carey confirmed on Thursday that she will be back with the Oregon State gymnastics team next season and will make another bid for a national championship.

She posted on social media last week that she will be taking part in elite gymnastics training camps and competitions this year. She has not yet decided what her schedule will be but that commitment will not impede her return to the OSU squad in 2023.

In one season, Jade Carey has rewritten the record book for Oregon State gymnastics.

Immediately after the Oregon State gymnastics team was knocked out of the Seattle Regional in the semifinal round last Thursday, senior Madi D…

OSU women's golf: Beavers in sixth after 1st round at Pac-12 Championship

Oregon State freshman Jade Carey is one of four finalists for the Honda Sport Award for Gymnastics.

Oregon State’s Jade Carey performs her floor exercise at the NCAA Gymnastics Championships on Thursday, April 14. Carey competed in the all-around as an individual.

Associate head coach Bryan Raschilla celebrates as Jade Carey lands her vault at the NCAA Gymnastics Championships on Thursday in Fort Worth, Texas.