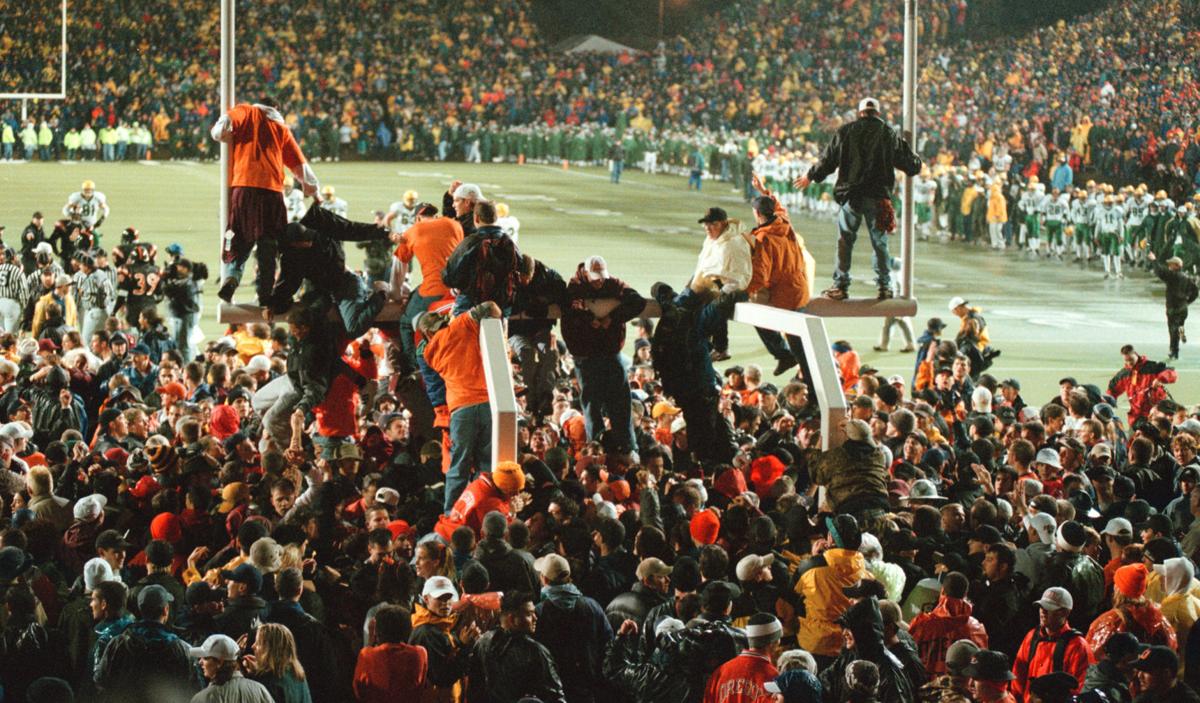 Oregon State fans storm the goal post at the end of the first overtime after the Ducks failed to score on fourth down, however a pass interference penalty gave Oregon a second chance to tie the game and send it into a second overtime. 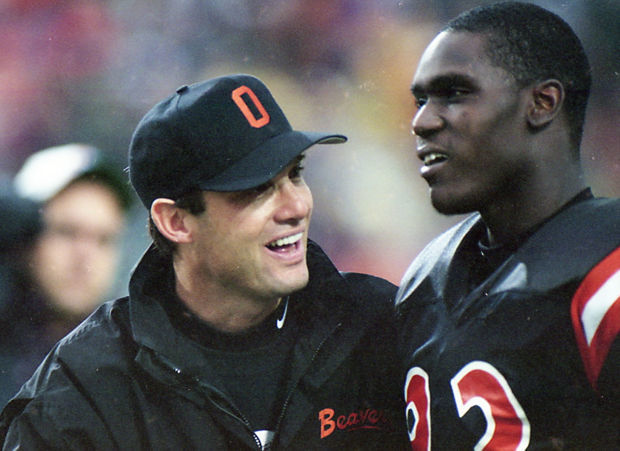 Oregon State head coach Mike Riley talks with receiver James Battle after the Beavers beat the Ducks in the 1998 Civil War. Riley left for the San Diego Chargers but the Beavers began a stretch of success the next season.

One of the biggest moments in Oregon State football history came 20 years ago in the Civil War game.

No major streak was going to end for the Beavers in the 1998 season. There would be no winning record and no bowl game.

Even the most ardent OSU fans were used to losing football by then. The Beavers had not put together a winning season since 1970 and the last bowl appearance was the 1965 Rose Bowl.

As Civil War week began, the Beavers had four wins and would have to wait another year before celebrating a winning season and bowl berth.

A nucleus of a winning football roster had taken formation during the previous weeks. Freshman walk-on quarterback Jonathan Smith had come off the bench in the second half to shred the Washington secondary and nearly lead the Beavers to a miracle comeback in a 35-34 loss that ended with a failed two-point conversion attempt.

Smith took the starting spot at that point and the Beavers would have their starter for the next three years.

Then there was running back Ken Simonton, who had been an under-the-radar recruit by Mike Riley at USC and wound up with the coach at OSU.

“That was a special team,” Riley said Tuesday morning. “That was our second year back at Oregon State and we had kind of a rough first year finding our way but we had a good group of kids that kept getting better and as the season went on we were getting better all the time.”

Said Cornell: “That team had some of the best upperclassmen leadership and talent that I played on in my career. I think they had a lot to do with what happened.”

The Beavers were decided underdogs to an 8-3 Oregon team looking to finish in sole possession of third in the Pacific-10 Conference.

“So it kind of led up to this Civil War game where our guys were kind of excited about it,” Riley said. “We weren’t going to be bowl eligible but the guys like Inoke Breckterfield, who was a great defensive player for us said, ‘this is our bowl game, let’s make the most of it.’"

They did. The teams played to a 31-31 score at the end of regulation.

He also recalled a close call.

“I always remember I should have thrown a pick-6 and the guy dropped the ball,” Smith said. “We were running a curl route and the outside linebacker jumped it and it goes right off his chest.”

The Beavers had the first possession of the first overtime and went to Simonton four straight times, the fourth a short touchdown run for a 38-31 lead.

The Ducks had to score to stay alive. Akili Smith misfired on a pass on first down. On second, he threw to the flat for a completion, but the receiver was swarmed by OSU defenders for a loss. On third-and-13, his pass was deflected incomplete by Carroll.

On fourth down, he went down the middle and the ball was dropped, but a flag was thrown for pass interference. Fans spilled out of the stands thinking that the game was over and had to be moved off the field.

The Ducks went on to score and send the game into a second OT.

It was a setback, but the Beavers didn’t blink.

“I think we felt pretty good,” Cornell said. “We had been able to move the ball pretty well and score. The PI call was a bummer. It would have been nice to wrap it up there but I don’t think that we were worried about going back out there and being able to put some points on the board.”

Oregon got the ball first but could not get into the end zone and had to settle for a field goal and a 41-38 lead.

The Beavers began their possession with a pass for nine yards from Jonathan Smith to tight end Marty Maurer to the UO 16.

OSU had been running the stretch play with Simonton throughout the game, using an unbalanced line to get another blocker in front of him.

That was the call.

“I think it was fire, steeler,” Jonathan Smith said. “Fire went right, steeler was stretch to the outside.”

Simonton took the stretch handoff, split through two Ducks, avoided a diving tackle attempt, hit the corner and sprinted to the end zone. OSU had its 44-41 win in double overtime.

“It had been working,” Smith said of the play. “I handed it to him and didn’t carry out my fake and saw him go down the sideline and the place went nuts. I think I got up here (in the Valley Football Center) and took a look out the windows here at the crowd. Pretty cool.”

Simonton finished with four rushing touchdowns on the day.

“During the moment of the game (you) don’t realize how kind of how big and how lasting the thing will be, but as I look back on it now, obviously it was a great football game and one memory I won’t soon forget,” Smith said.

“That was our fifth win (and) it felt like there was some momentum going into the next year.”

Not just the next year.

The impact of the win was felt in following seasons by the Oregon State football program.

Riley left for a shot at the NFL with the San Diego Chargers and Dennis Erickson arrived in time to lead OSU to a winning season and bowl game berth in 1999, which sparked the 2000 season in which the Beavers finished 11-1 and steamrolled Notre Dame in the Fiesta Bowl.

The Beavers went on to go to nine more bowls through 2013, eight coming under Riley’s second go ‘round after Erickson left for the NFL.

For many, the 1998 Civil War represents a turning point for the program.

“I felt like that was kind of proof of what Oregon State was capable of,” Riley said. “I felt confident in that. I had many mixed emotions about leaving and it was kind of one of those deals, I was going to give the NFL a shot or not, because it was there on my plate. I love Corvallis and Oregon State, but it made it even harder because I knew it could be on the brink of something that was good and it was changing and it was changing right in that (1998 season) right in front of our eyes.”

OSU football: Beavers want to execute at the their best against Ducks

Oregon State isn’t playing for a bowl game when the Beavers square off with rival Oregon in Friday’s Civil War — set for 1 p.m. Friday at Rese…

Oregon State fans storm the goal post at the end of the first overtime after the Ducks failed to score on fourth down, however a pass interference penalty gave Oregon a second chance to tie the game and send it into a second overtime.

Oregon State head coach Mike Riley talks with receiver James Battle after the Beavers beat the Ducks in the 1998 Civil War. Riley left for the San Diego Chargers but the Beavers began a stretch of success the next season.