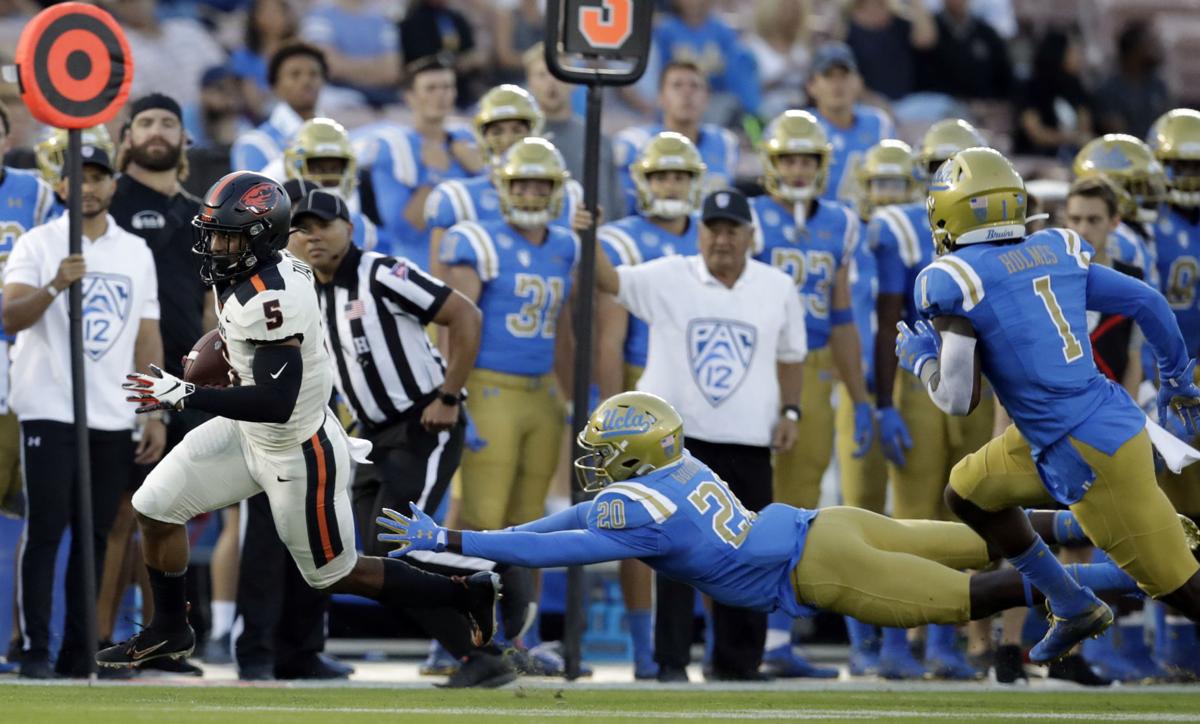 Oregon State receiver Kolby Taylor had this 45-yard reception to set up the Beavers' first touchdown in the first quarter and also picked up seven yards on fourth-and-6 in the third quarter on Saturday at UCLA. 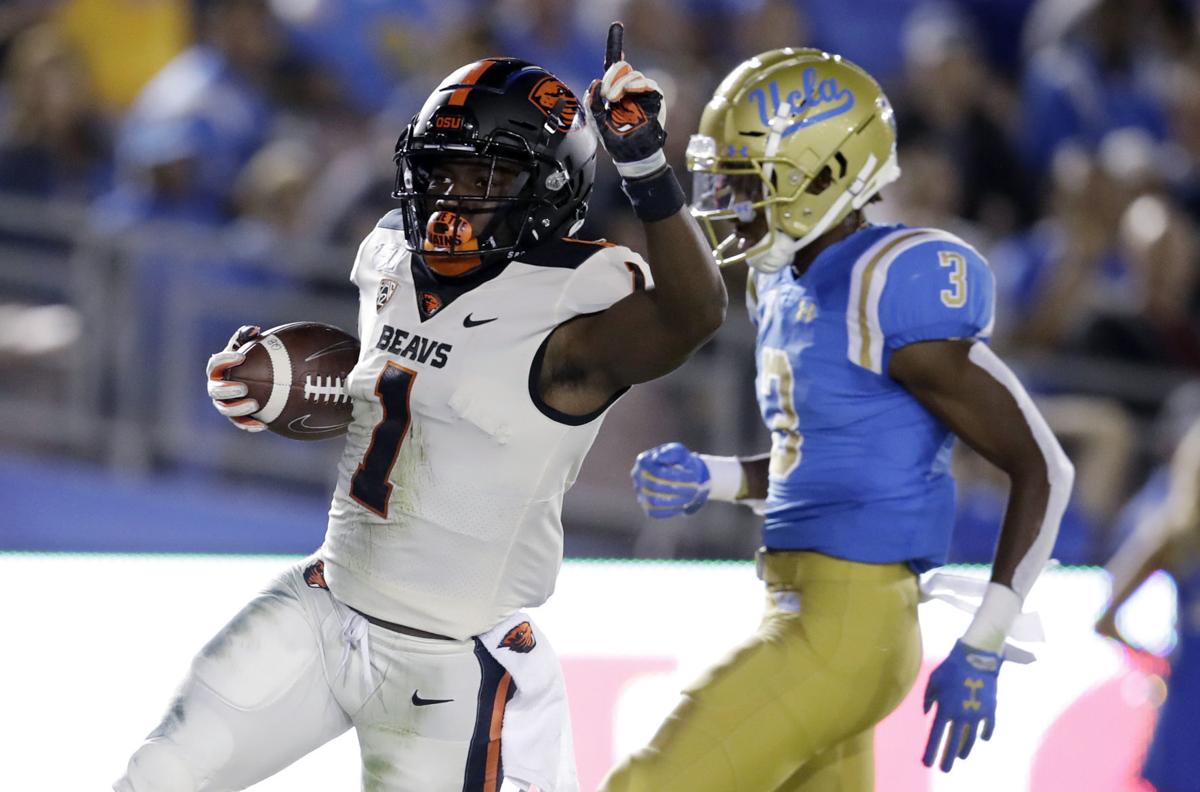 Oregon State receiver Tyjon Lindsey scores on a 53-yard touchdown reception in the third quarter on Saturday at UCLA. 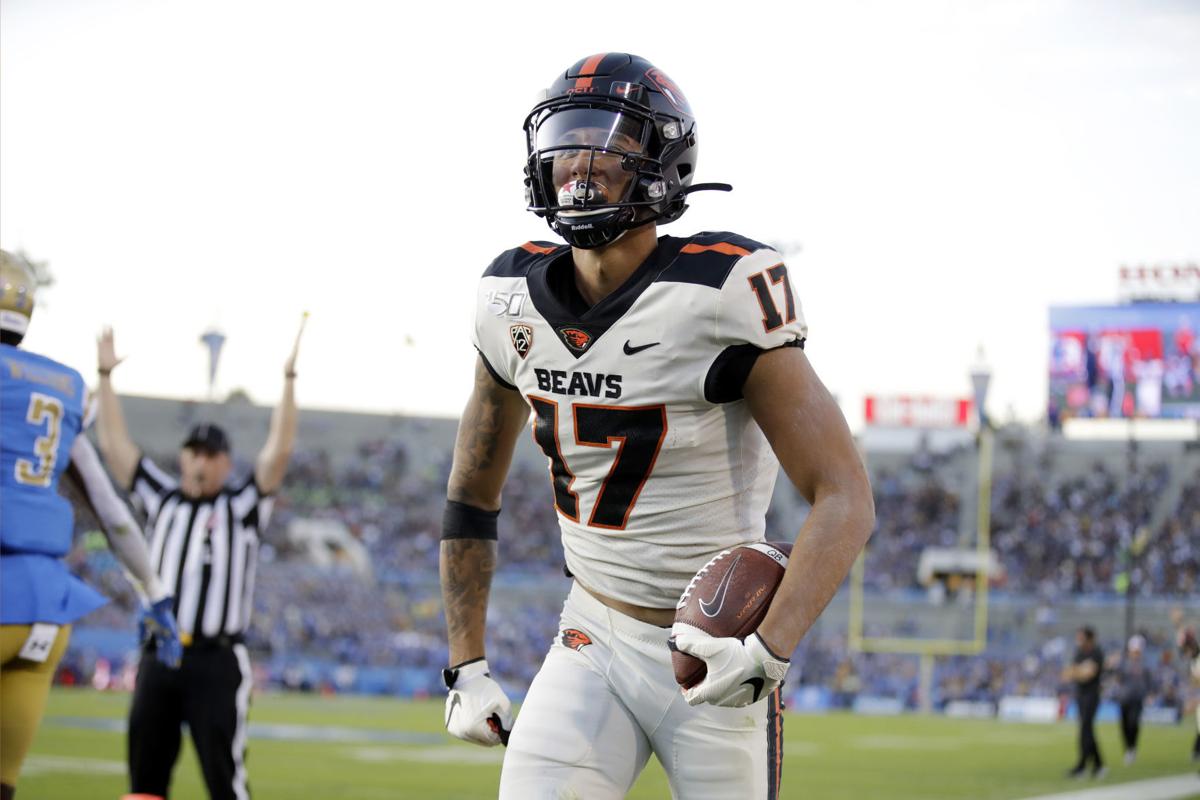 Isaiah Hodgins had another 10 catches for 123 yards and three touchdowns against the Bruins on Saturday.

When opposing coaches think about slowing down Oregon State’s passing attack, the first name that comes to mind is most likely Isaiah Hodgins.

The junior receiver has gotten off to a tremendous start and leads the Pac-12 and is second in the nation with 126.4 yards per game. He has 43 receptions for 632 yards and nine touchdowns through the first five games of the season.

Even with extra attention being paid to him, Hodgins has been able to make a major impact.

That was the case again last Saturday when he torched the UCLA secondary with 10 receptions for 123 yards and three touchdowns in a 48-31 Pac-12 win inside the Rose Bowl.

Hodgins gave credit to offensive coordinator Brian Lindgren and receivers coach Kefense Hynson for putting him in position to make so many plays.

“We know that we are going to be seeing that more and more every single game and they do a good job of mixing me in, putting me in the outside slot, different motions and loosening up coverages,” Hodgins said last Saturday night. “They definitely do a good job of breaking down film and making sure the whole offense is on the same page.”

Lindgren said moving Hodgins around often can make it rougher on the defense.

“He’s a super-talented player and can play in the slot, he can play outside, so trying to be creative to where people can’t always pinpoint exactly where he’s going to be and just take advantage of his skills is something we want to do as an offensive staff,” he said.

“It’s awesome for me,” he said. “Everybody has eyes on Isaiah so it just makes it a little easier for us to get open and do our thing. Isaiah’s a great player and I would expect teams to continue to do that and maybe try to bracket him a little more.”

Hodgins has more than shouldered the load with senior receiver Trevon Bradford missing the first five games. He has accounted for 40 percent of the team’s catches (43 of 107) and 46 percent of the receiving yards (632 of 1,363). He also has nine of quarterback Jake Luton’s 14 touchdown passes.

While Hodgins has seemingly only gotten better as the season has progressed — he has had 20 catches for 285 yards in two Pac-12 games — the Beavers (2-3, 1-1) will need to have others continue to step up to take the pressure off Hodgins.

Hodgins had 10 of the Beavers’ 18 receptions last week, but other players came up big in crucial situations to make plays.

Taylor had just two catches for 52 yards but the first one — a 45-yarder on the opening drive — set up a short touchdown to Hodgins.

Then in the third quarter in a 10-point game, Taylor’s number was called on fourth-and-6 at the UCLA 29. He made the catch and stretched for the first down.

On the next play, Luton hit Hodgins to push the lead back to 17.

Tyjon Lindsey had just one catch, but it was a big one. On third-and-2 at the OSU 47, the Beavers rushed to the line and appeared to be poised to run the ball. Instead, Luton used the play-action pass and hit a wide-open Lindsey for a 53-yard touchdown.

Tight end Noah Togiai had two catches for 22 yards and shrugged off a defender for a key first down.

Fellow tight end Teagan Quitoriano had his first catch of the season and first career touchdown in the first quarter, one play after the Beavers recovered an onside kick. That made the score 21-0 six minutes into the game.

“I think there was a lot of under-the-radar plays in that game that were really huge to keeping the ball moving for us,” Luton said. “I think Kolby had some huge plays, Noah had some huge plays that maybe didn’t get all the recognition. They weren’t huge down-the-field bombs but they were big-time catches when we needed them.”

The Beavers will need those trends to continue moving forward. Togiai is second on the team with 14 catches for 107 yards while Champ Flemings has 13 catches for 227 yards, with five catches and 142 yards coming against Cal Poly.

“We have some other talented players and we want to be able to take advantage of their skillset and find ways to get them involved and make plays for us,” Lindgren said.

Taylor said it’s just the other receivers owning their roles and executing when called upon.

“I’m just out there trying to be consistent along with Tyjon and Champ, Noah and Teagan, the tight ends, just doing our role and when the play is there just step up and make the play,” Taylor said. “If we’re all doing our job I think the offense can be pretty special.”

The Beavers receivers could be in for a stiff challenge against a Utah team that is second in the conference allowing just 282.4 yards per game.

“We’re excited about it,” Taylor said. “Utah is one of the best defenses in the Pac-12. Great secondary. We know they play a lot of man coverage so we’re excited about the challenge and to show what we can do.”

Oregon State quarterback Jake Luton tossed five touchdown passes and ran for another on Saturday night in a 48-31 win over UCLA in the Rose Bowl.

OSU football: Beavers never let up after big lead in win over UCLA

PASADENA, Calif. — It would have been natural for the Oregon State football team to have a bit of a letdown after jumping out to a 21-0 lead s…

OSU football: Luton has six touchdowns as Beavers fend off UCLA down the stretch

PASADENA, Calif. — When Jake Luton took off on a quarterback keeper and scampered 19 yards for his sixth touchdown of the game, it set off a c…

Pac-12 Rewind: Boo birds out in the Rose Bowl

The boo birds were out early Saturday night as fans watched UCLA fall behind 21-0 to Oregon State in the first six minutes of the game.

The Oregon State women’s basketball team was picked to finish third in the Pac-12 this season in a vote of the conference coaches.

OSU football: Beavers face a Utes team that can run the ball and stop the run

Oregon State’s offensive line and defensive front seven have shown plenty of improvement over the past season.

OSU football: Beavers look to carry over momentum into battle with No. 15 Utah

Even up 17 points in the closing seconds, the Oregon State defense did not want to allow any more points to UCLA last Saturday night.

Oregon State receiver Kolby Taylor had this 45-yard reception to set up the Beavers' first touchdown in the first quarter and also picked up seven yards on fourth-and-6 in the third quarter on Saturday at UCLA.

Oregon State receiver Tyjon Lindsey scores on a 53-yard touchdown reception in the third quarter on Saturday at UCLA.

Isaiah Hodgins had another 10 catches for 123 yards and three touchdowns against the Bruins on Saturday.