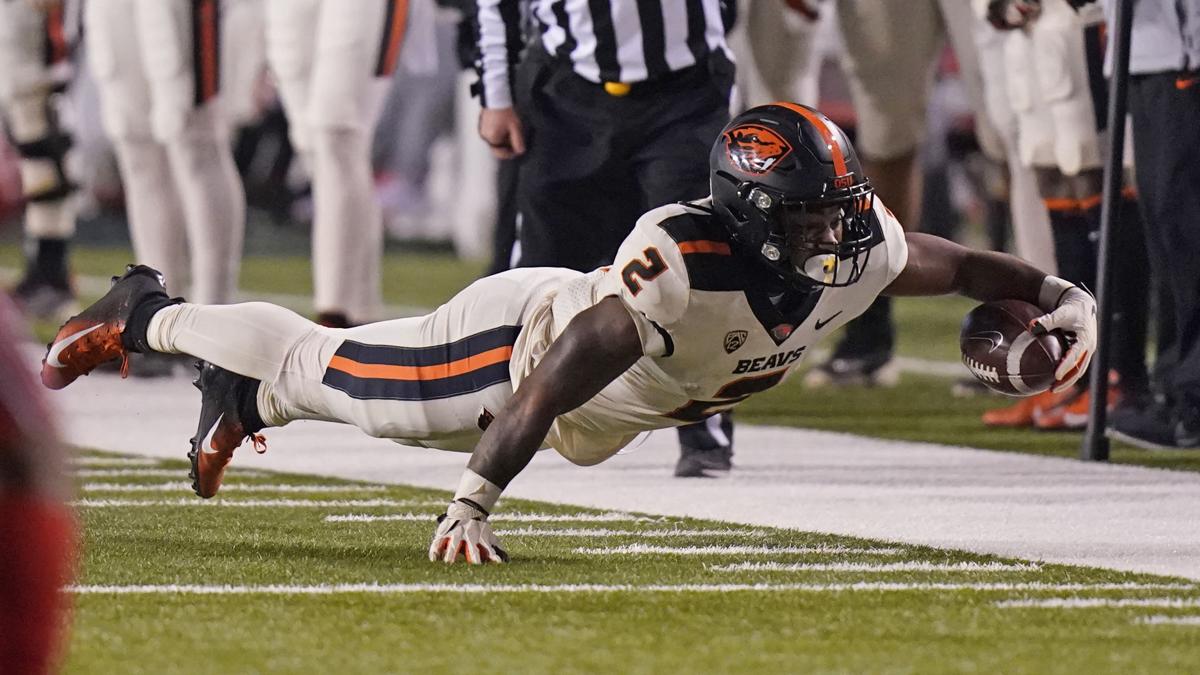 Oregon State running back Calvin Tyler Jr. (2) dives out of bound to stop the clock against Utah during the second half last week. Tyler was thrust into action, his first of the season, against the Utes. 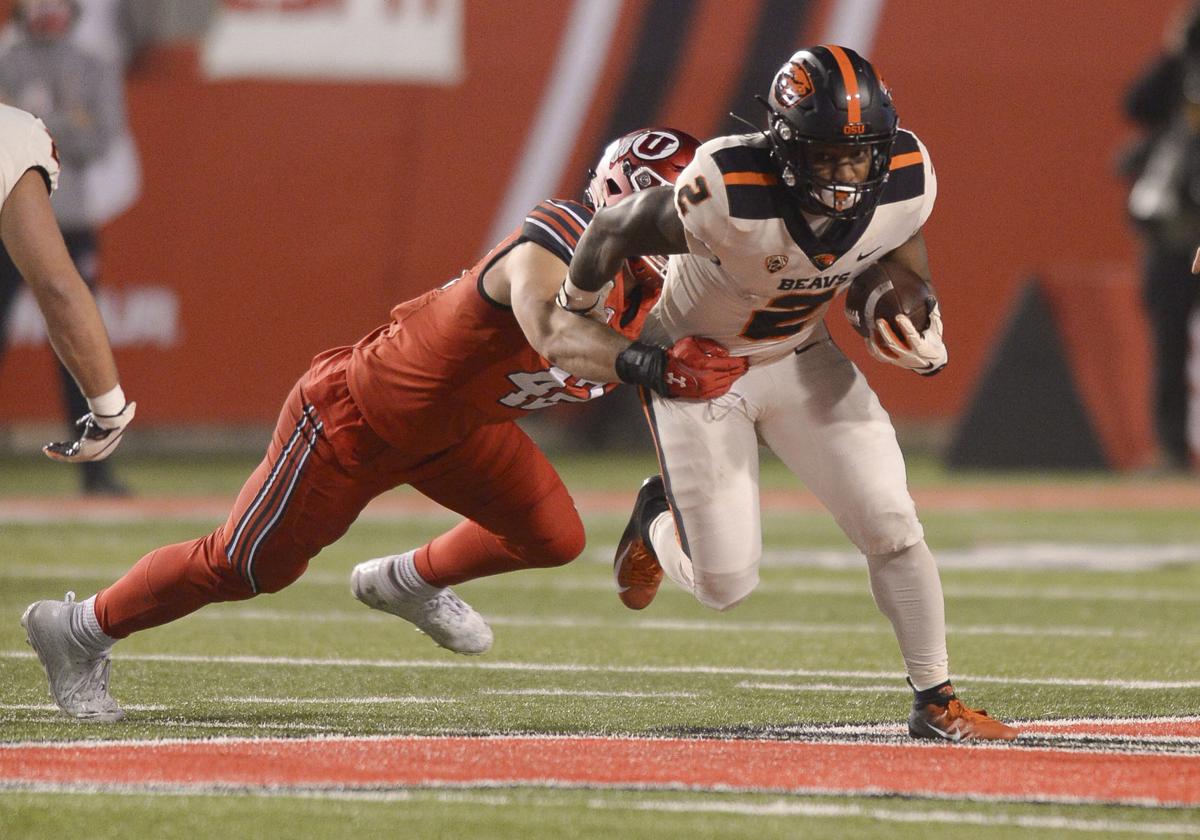 For Calvin Tyler Jr., transferring was never an option.

Between the injuries and the talent ahead of him on the depth chart, you couldn’t blame the Oregon State running back if he had gone searching for playing time elsewhere. Plenty of players in his shoes would have caught the first flight out of town.

“That never crossed my mind,” Tyler said. “I’ve never been a guy to get up and run when things get hard.”

So he persevered. He trudged through a grueling rehab process to come back from the torn anterior cruciate ligament he suffered in 2018 and reminded himself every single day of his purpose and his plan.

Last Saturday, Tyler’s self-belief paid off as he suddenly became Oregon State’s No. 1 running back option during its game at Utah. He didn’t let the opportunity pass him by and now he is hoping to rediscover the talent and physical running style that he flashed as a true freshman four years ago and continue his dream of reaching the NFL.

“I feel like all my life, I’ve been patient and persevering — going through things and overcoming them,” Tyler said. “But my biggest thing: I’m a big religious guy. So I trust God. I know everything is gonna work out for the better. I always prepared every week like I would play. I just trusted God.”

“No question, we were excited for him,” coach Jonathan Smith said. “He’s worked really hard to come back from some of those injuries. He’s worked really hard with some guys who are just in front of him. He scores a couple of touchdowns. He actually had a couple of good carries that were just 2- or 3-yard runs that weren't blocked all that well and he fell forward. I think he’s another guy who, with that experience from last week, will play better in game two.”

Tyler hadn’t played a single snap of the 2020 season prior to last Saturday, in large part because the Beavers are so loaded at his position.

Jermar Jefferson is having one of the best seasons by a running back in school history and has rightfully taken the majority of the carries. Jefferson’s backup, B.J. Baylor, is good enough to be a feature back, and the coaching staff has been looking for ways to get the ball in his hands more often.

That doesn’t leave much work for Tyler, or any of the other reserves.

But Jefferson was ruled out of the Utah game due to COVID-19 contact tracing protocols, and Baylor suffered a shoulder injury in the first half and didn’t return.

That left Tyler as the only experienced back on the roster. Like quarterback Chance Nolan, he was thrust into action for a team that has been hit hard by injuries during the past couple of weeks.

“To be honest with you, mentally, I feel like I was there,” Tyler said. “But physically, I could have done better with a lot of things. I felt a little bit heavy in the run game. Didn’t make the plays that I should have made and used to make. But I know it’s a new week coming up, so that’s what I’m focused on now.”

When he first rolled into Corvallis as an explosive 3-star recruit out of Beaumont, Texas, Tyler was fully intent on winning the starting running back job. He saw limited time there, but made in impact on special teams and averaged more than 20 yards on nine kickoff returns.

He was expected to compete for the starting job in 2018, but all that progress was derailed when he blew out his knee early in fall camp and missed the entire year.

"I trusted God, just knowing that better days would come," Tyler said. "Just pushing myself daily and saying that eventually, things are going to work out and I’m going to get even better than I was before."

Whether Tyler is leaned on to start this Saturday — or if he works his way into the rotation with Jefferson and Baylor throughout the rest of the year — he will keep approaching each week with the same optimistic belief that brought him to this moment.

Whatever happens the rest of the way, he knows he has poured his heart into football. But he also knows there is plenty more to life.

In September, he became a father and has spent the season juggling the responsibilities of parenthood, football and school. He said his schedule hasn’t been all that different — he gets classes and practice out of the way early and then has the afternoon to watch film and be with his son.

“It just made me grind harder. It’s another motivation. He’s pushing me harder,” Tyler said of his son, Calvin Tyler III. “I’ve always been bigger than myself and I know it’s even bigger than me now, especially with him on my side. I want to do better for him and the family.”

If professional football ultimately doesn’t work out, Tyler has as interesting of a backup plan as any player on Oregon State’s roster — he is an aspiring bull rider, and rode sheep competitively growing up in Texas. While he’s never been on a bull — his mother wouldn’t allow it when he was competing — he hasn’t ruled out chasing the dream of doing it professionally someday.

He said he was working with the same trainer as Professional Bull Riders champion Cooper Davis as recently as 2016, and he may take another crack at his second passion if the NFL doesn’t pan out.

When asked if there are any translatable skills between rodeo and being a college running back, he gave a quick answer, and one that is fitting for someone who has endured as much as he has.

OSU football: Beavers back to work to help Chance Nolan build on his Pac-12 debut

This was what Chance Nolan expected when he came to Oregon State.

Oregon State came close to completing its third dramatic win in as many weeks Saturday night.

Missing its starting quarterback and its top offensive playmaker, Oregon State needed a gutsy performance if it hoped to emerge with a win Sat…

OSU football: 5 things to watch as Beavers take on Stanford

There is still plenty up in the air as the Pac-12 approaches the end of a chaotic 2020 regular season. With the pivotal matchup between Oregon…

Oregon State will get one last home game this season.

Oregon State running back Calvin Tyler Jr. (2) dives out of bound to stop the clock against Utah during the second half last week. Tyler was thrust into action, his first of the season, against the Utes.