Become a Member
Read Today's E-edition
Share This
OSU football: Defense stepping up late in the season
0 Comments
Share this
1 of 2 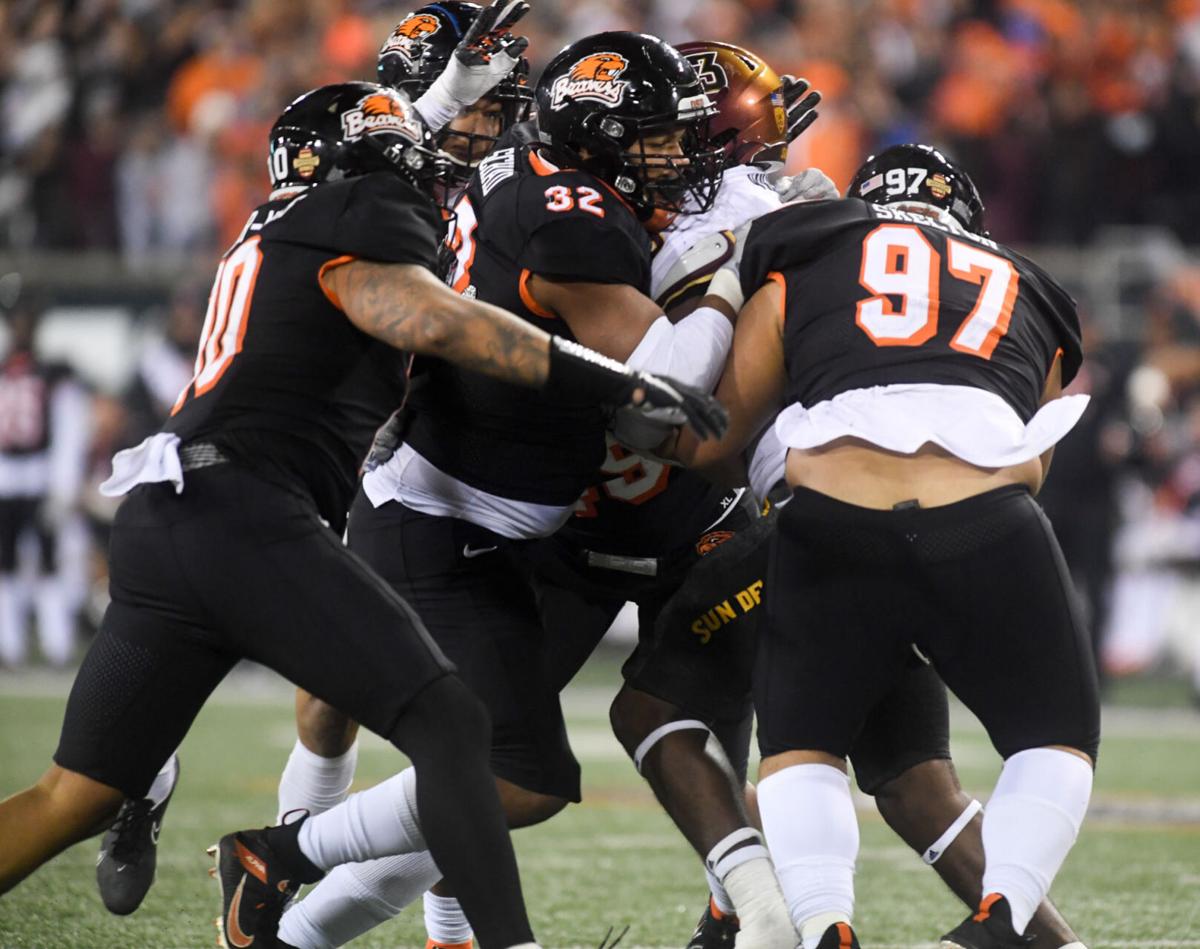 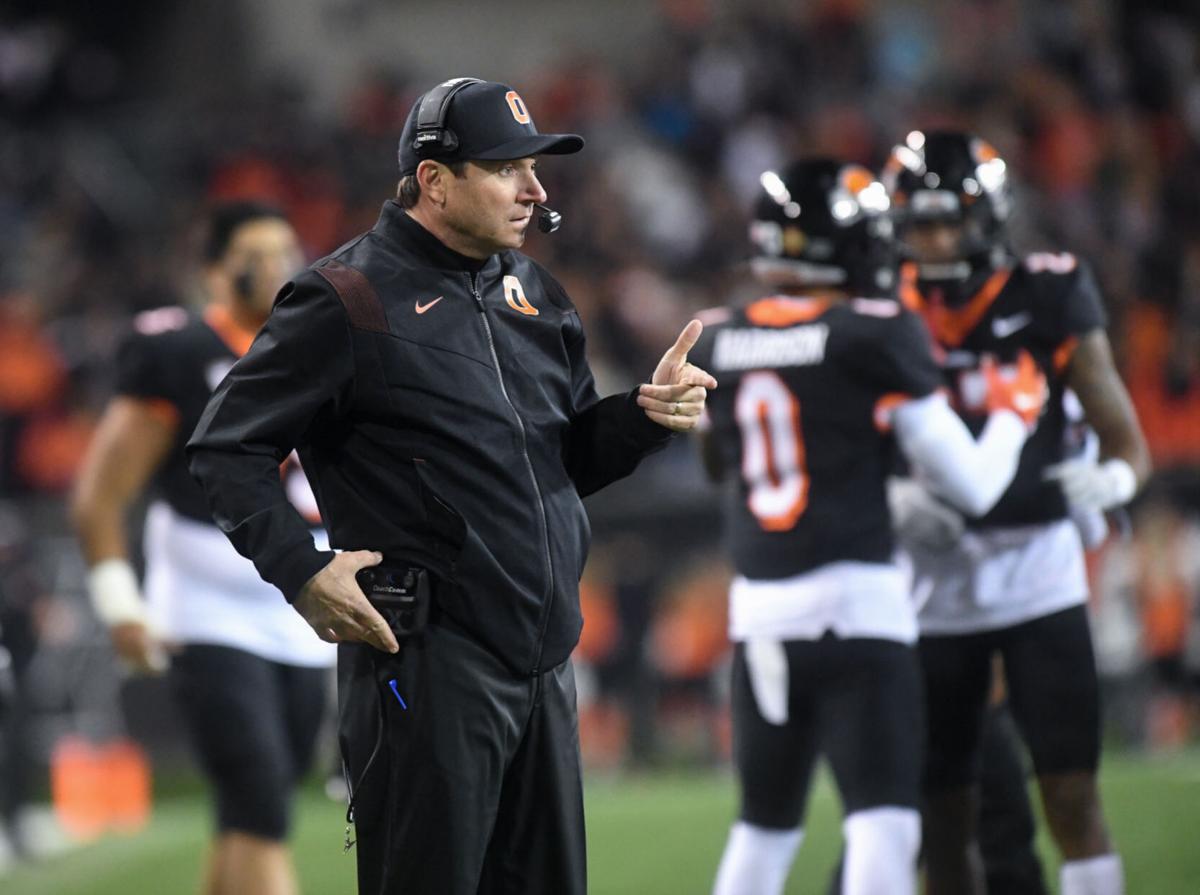 Oregon State coach Jonathan Smith has his team within reach of a Pac-12 championship game berth after two straight wins.

Two offenses combining to average just under 50 points a game this season in Stanford and Arizona State got a total of 24 against the Beavers.

In two wins, OSU (7-4, 5-3) allowed those teams 230 and 266 yards of total offense, respectively, the two lowest numbers the Beavers have given up in Pac-12 football games this fall. The success coincides with Trent Bray being promoted to defensive coordinator and Tim Tibesar being let go from that position.

Arizona State’s only touchdown last Saturday in OSU’s 24-10 victory came off a blocked punt that set up the Sun Devils’ offense at the Beavers’ 4.

“I think we’ve tackled well, affected the passer, not only sacks but affected the passer,” Oregon State coach Jonathan Smith said Monday in his regular press conference to begin the week. “I think taking the ball away over just the last couple weeks, starting with the takeaway early in this game that helped us there.”

The Beavers went four straight games without a sack before getting three against ASU, including one apiece from Avery Roberts and Kitan Oladapo.

OSU had three takeaways (two interceptions and a fumble recovery) versus Stanford before Alex Austin intercepted Sun Devils quarterback Jayden Daniels on the second play of the game.

The Beavers held Daniels, a threat to pass and run, to 166 yards through the air and 46 yards on 10 attempts on the ground.

"I thought for the most part we were effective,” Smith said. “We had a guy for (spying) Jayden most of the night. He got out a couple of times, guys missed some tackles. But overall, looking at points they were able to score, we did a good job.”

The Beavers lost Roberts, an inside linebacker and the team’s leading tackler on the season, to an ankle injury in the first quarter against Arizona State and his status for Saturday’s game at No. 11 Oregon (9-2, 6-2) is uncertain. Smith is hopeful Roberts can practice this week.

Stepping up to fill the gap was Kyrei Fisher, who finished with a team-high nine tackles, including half a sack, and three quarterback hurries.

“He played well, played physical, made some tackles out there,” Smith said. “I think it showed that he’s been preparing well, not playing a bunch at linebacker because of those guys in front of him. But when he was called upon he was definitely ready and prepared.”

The Beavers have been hit hard with long-term injuries on the defensive side.

Lineman Isaac Hodgins hasn’t played this season due to a foot injury suffered in fall camp. Cornerback Alton Julian has missed the last four games and is expect to be out the rest of the season with a leg injury.

“We’ve got other guys that are ready to step up, and they need to,” Smith said. “I look across the teams in this conference, a lot of guys are down for different teams. You get to the end of the year and that takes place and depth always matters. Kyrei is a great example. Guys have got to continue to prepare and be ready when they’re called upon.”

Smith was asked Monday if anyone will hear him say “Go Dawgs” this week.

Oregon State needs a win against Oregon and for Washington to defeat Washington State in Friday’s Apple Cup in Seattle for the Beavers to clinch a berth in the Pac-12 championship game against Utah on Dec. 3 in Las Vegas.

“Definitely rooting for those guys,” said Smith, formerly the Huskies’ offensive coordinator. “But our focus, and all those scenarios, the ultimate thing is it comes down to us at 12:30 on Saturday. We’ve got to play well to be able to earn the right to get into those scenarios. So that’s our focus.”

Much to play for

Smith reflected on the importance of this coming Saturday, both the stakes at hand and it being a rivalry game. You want to be playing well at the end of the season and be playing in meaningful games, he said.

“So we set the stage for that. You go back to this mindset of you’ve got to prepare well like we’ve done a lot of the time this year,” Smith said. That’s what’s in your mind, back to the routine, the preparation, the understanding that it’s a big game. But ultimately if you want to win a big game, you’ve got to play well and execute, just like you’ve been doing previously.”

Defensive lineman Cody Anderson missed the Arizona State game after tweaking his back and was unable to practice late last week. Smith gave no update on Anderson’s status.

MCMINNVILLE — A football season that had a lot of questions at the start ended 10 wins later in the state semifinals.

Oregon State football coach Jonathan Smith has agreed to a contract extension that runs through the 2027 season.

Oregon State coach Jonathan Smith has his team within reach of a Pac-12 championship game berth after two straight wins.