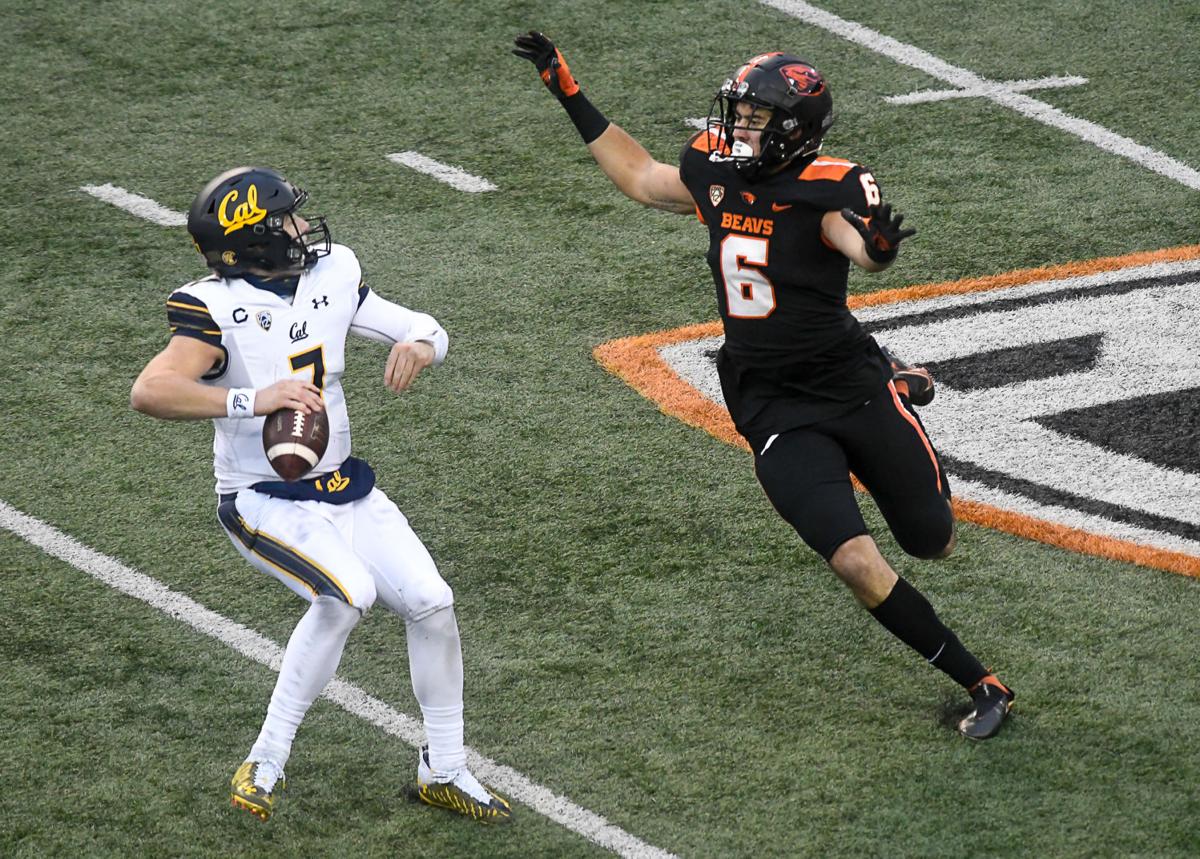 Oregon State's John McCartan puts pressure on Cal quarterback Chase Garbers in Saturday's 31-27 win over the Golden Bears. The defense made some big plays in the second half. 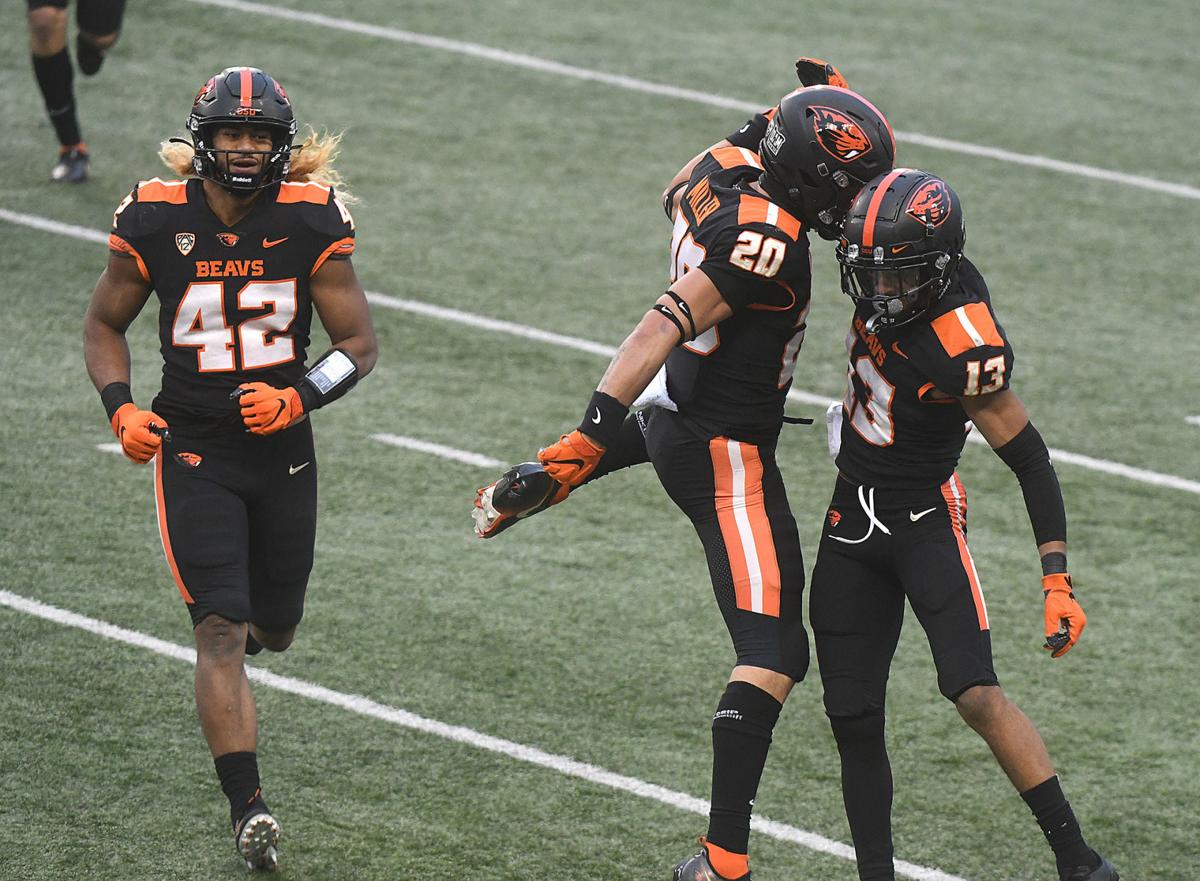 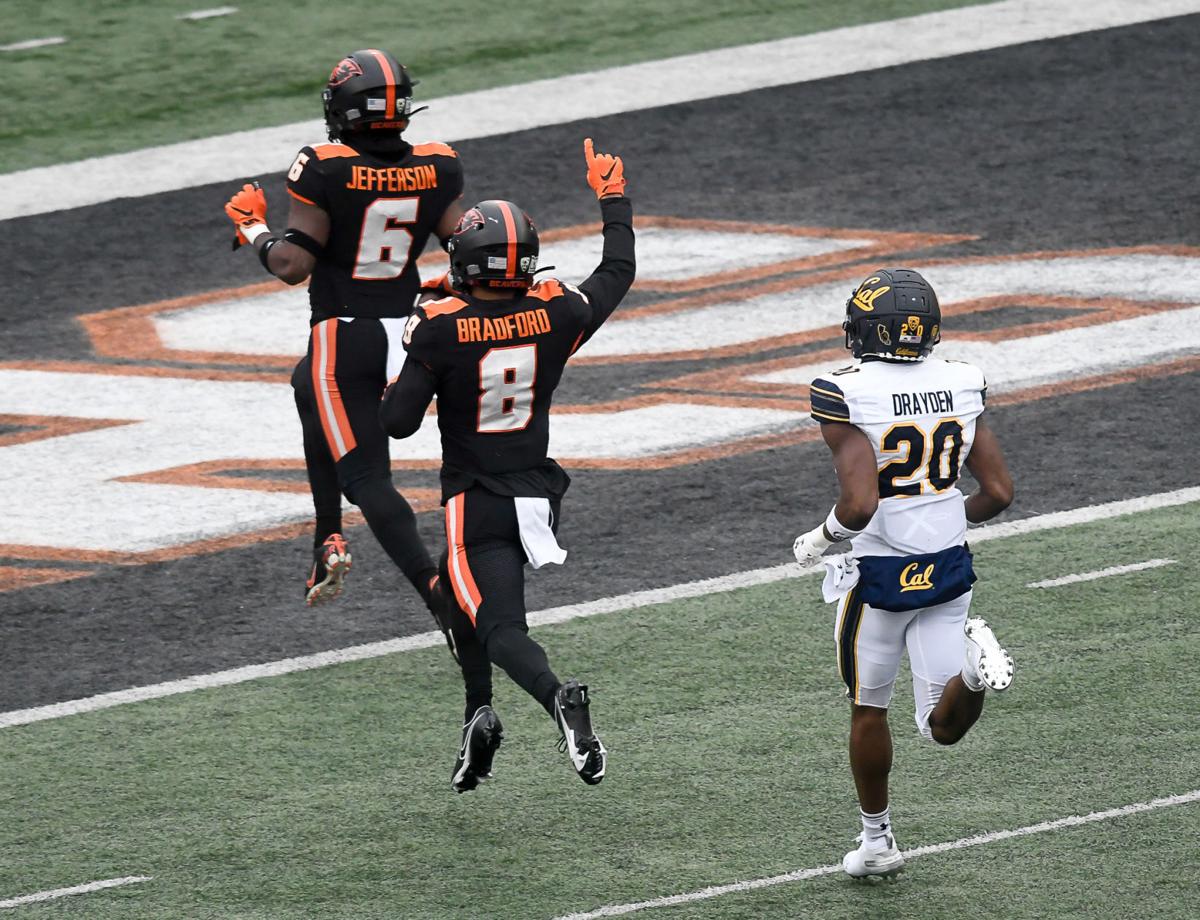 Oregon State fought its way to a gutsy 31-27 win Saturday and kept its season on the rails against a tough California Golden Bears team.

It wasn’t always pretty as the Beavers (1-2) were plagued by some of the same issues that were present during their first two games. The defense struggled to get stops on third down and the offense struggled to convert them.

The play of quarterback Tristan Gebbia was erratic and the offense struggled aside from a few home run plays. But a win is a win, and Oregon State needed this one. Saturday was a gut check for the Beavers and they showed a ton of heart in the fourth quarter.

Here are five takeaways from the win over Cal:

It felt like deja vu as the defense was torched once again in the first half Saturday. The Beavers had no answer for Cal wideout Keoka Crawford and the Golden Bears ran all over them for two quarters.

But something changed in the second half. OSU started racking up tackles for loss by the bunches and punished the Bears in first- and second- down situations to set up a handful of third-and-longs. Near the end of the third quarter, Hamilcar Rashed Jr. and Simon Sandberg both left with injuries and only Rashed Jr. made it back on the field.

Playing without two of their most explosive playmakers, the defense delivered its best quarter of the season to close out the game as OSU forced two Cal punts and got a game-sealing interception.

The defense bent plenty of times Saturday but never broke and should emerge from this game with plenty of confidence.

It hasn’t always been easy for Jesiah Irish this season. The redshirt sophomore has eye-catching speed and has flashed big-play potential during his time in Corvallis. But he’s barely seen the field on offense this year, no doubt a casualty of Oregon State’s deep wideout group.

So he’s looked for other ways to impact the game and has turned into a special teams superstar. His perseverance paid off Saturday as he delivered a game-changing moment when he blocked a punt in the fourth quarter to set up Oregon State’s game-winning touchdown.

Irish was ecstatic after the game. What head coach Jonathan Smith said about him was a good reminder of the little things players can do to help a team.

“He’s listed as a receiver and he’s got talent at receiver, but he might be our best special teams player,” Smith said. “The way he runs down on punts, he’s been doing it for a couple of years. That was a huge play. It wasn’t like we called an all-out block on that. He's just doing his job and believing that he has a chance to make a play. He changed the game.”

The stats won’t necessarily show it, but Teagan Quitoriano might have been Oregon State’s most important player Saturday. Jermar Jefferson gave the Beavers some early momentum with an explosive 75-yard touchdown run on the first play from scrimmage.

But that play may have never happened without Quitoriano, who delivered a massive block that took two defenders out of the play. Two drives later, the junior tight end ran a stellar route to spring loose for a 35-yard touchdown.

He is always good in the blocking game and was Oregon State’s leading receiver against Cal. In a game that was defined by a handful of big moments, Quitoriano was directly involved in many of the good things the Beavers did.

Smith and Oregon State offensive coordinator Brian Lindgren gave their quarterback a chance to take some shots, especially in the second half. On Oregon State’s first offensive snap of the third quarter, they sent Gebbia on a rollout to the right sideline and he hit Luke Musgrave with a good throw.

The next play, he launched a deep ball to Champ Flemings and barely overthrew him. It was clear that Lindgren wanted to give Gebbia every opportunity to find some rhythm in the second half. All season, the redshirt junior has looked most comfortable throwing over the middle and that was the case Saturday. But he torpedoed the offense with a couple of bad interceptions and still wasn’t as accurate as coaches have said they want their starting quarterback to be.

Some of Gebbia’s issues are head-scratching. But despite the errors, he still scored the game-winning touchdown against a good Cal team. Smith sounds like he hasn’t lost any faith in his quarterback.

“He’s a tough kid now. He is. He did some good things tonight,” Smith said. “Obviously a couple of plays he would like back. He knew that we needed to be better in the pass game than our last game and he went back to work. He’s competitive. It means a bunch to him and that’s what you want in your quarterback — a guy who is resilient that way.”

These days, it seems like Jefferson is capable of scoring every time he touches the ball. He took the first handoff of the game 75 yards to the house. He could have done the same on his last carry, but made a smart play to run out of bounds and set the Beavers up to kneel out the game.

After the damage he did Saturday, Jefferson is now the Pac-12’s leading rusher. His 449 yards are 118 more than any other player has. He is averaging 7.2 yards per carry, good for 13th in the nation. Of the 12 players ahead of him, only two have a similarly high number of carries.

Jefferson said that before his long first-quarter touchdown, Gebbia checked the play to the weak side. As soon as the quarterback did that, Jefferson said he knew he was going to score because of what he saw in the defense.

He has always been a smart, physical runner who is capable of delivering big plays out of nowhere. But at the moment, it seems Jefferson is playing with more confidence than ever and has taken his game to another level.

Oregon State’s players had been searching for this feeling of elation for weeks.

There was a resiliency to Oregon State’s defense Saturday afternoon.

OSU football: Smith believes best is yet to come for Beavers

For all the difficulties Oregon State’s defense has had this season, it is much improved over where it was a year ago.

OSU football: Nolan gets some reps with the starters

Oregon State may be nowhere near making a quarterback change from the sound of things, but if the need to do so arises, backup Chance Nolan wi…

The most important play of Oregon State’s season so far began with a loud "thud" and ended with an even louder celebration on the sideline.

Oregon State's John McCartan puts pressure on Cal quarterback Chase Garbers in Saturday's 31-27 win over the Golden Bears. The defense made some big plays in the second half.