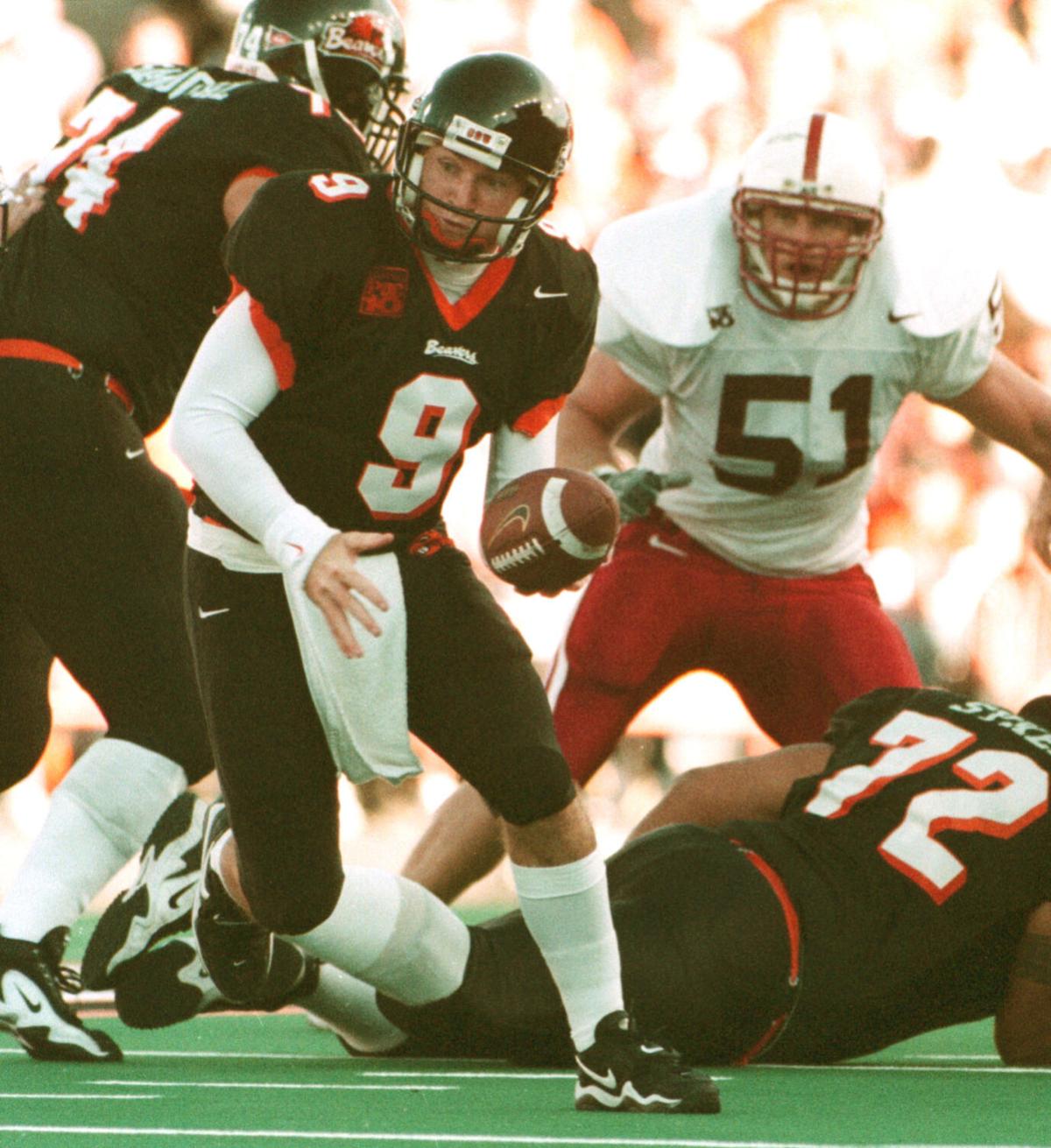 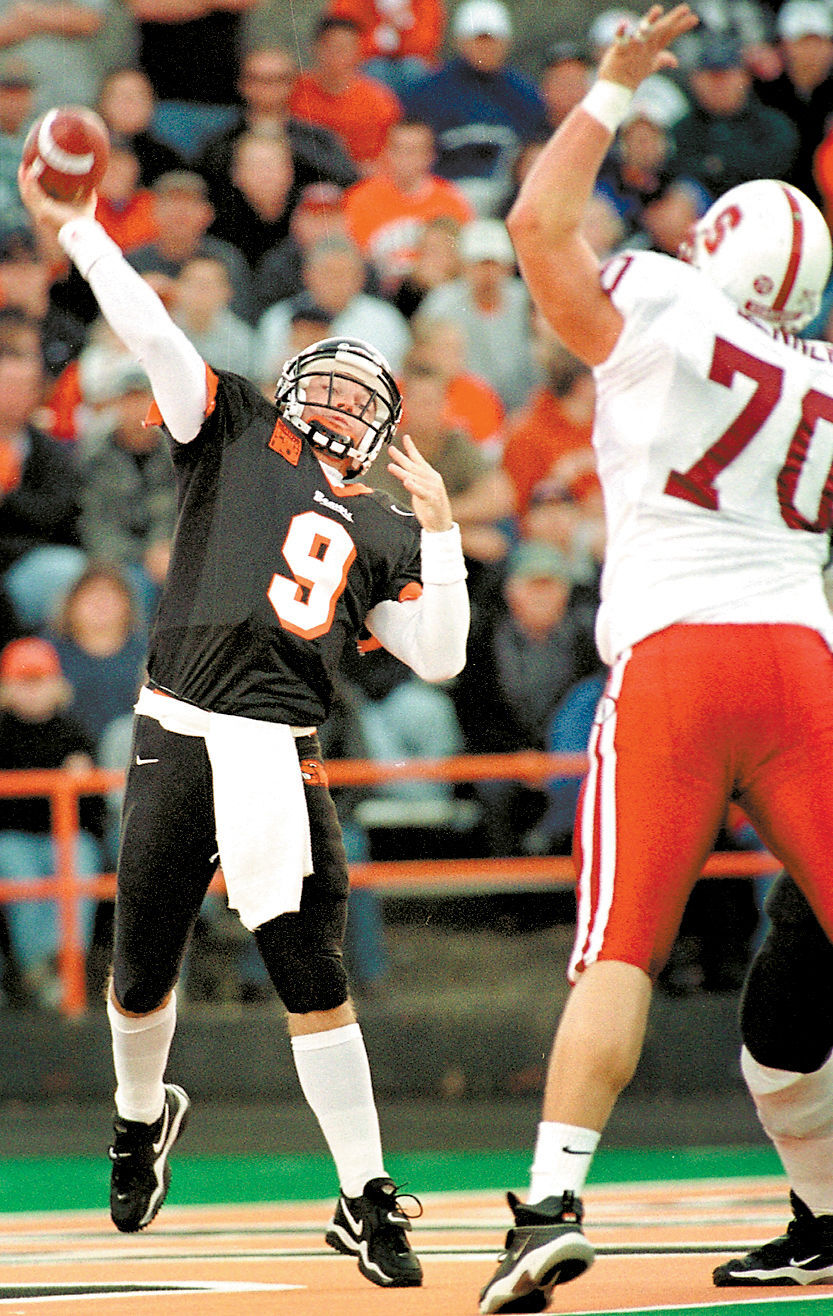 Jonathan Smith threw for 324 yards and two touchdowns against Stanford.

Sooner or later, the Oregon State football fans who persist in harping on all the things that Jonathan Smith isn't will finally see the forest for the trees and appreciate him for what he is.

No, he's not 6-foot-5, fleet of foot and Hollywood handsome like Warren Beatty, Dennis Quaid or some other movie-star quarterback.

No, he might not zip 70-yard lasers like the more-celebrated Kyle Boller, Carson Palmer or Randy Fasani, all of whom entered the Pacific-10 Conference with considerably more fanfare than the former walk-on from Glendora, Calif.

No, Smith can't always dance out of trouble and evade rushers like Fran Tarkenton or some other notable, nimble scrambler.

No, he doesn't complete 60 or 70 percent of his passes, like others who have perfected the 4- and 5-yard dump off.

All he does is win.

His line in Saturday's 38-6 woodshed job on Stanford at Reser Stadium was vintage.

— He gunned two coast-to-coast touchdowns, a school-record 97-yarder to Chad Johnson and a 76-yarder to T.J. Houshmandzadeh. The latter resulted from on a cross-the-field bullet that completely befuddled Stanford safety Aaron Focht, who badly misjudged Smith's arm strength and got toasted for his mistake.

— He didn't throw an interception for the fifth consecutive game, extending his pick-less streak to 141 passes.

Just another day at the office. Merely his 13th win in 21 starts since taking over for Terrance Bryant at Husky Stadium two seasons ago.

"Hey, the man plays football. His height has nothing to do with it; Ws and Ls, that's all that matters. As long as we're winning, it doesn't matter if he's 5-10.

The guy's a winner.

Don't believe me? You can look it up. The stars might lie, but the numbers never do.

— He's the winningest active quarterback in the Pacific-10 Conference.

— He's the winningest Beaver quarterback since Steve Endicott, who hasn't taken a snap in almost 30 years.

— He's perhaps the biggest reason the Beavers' plus-12 takeaway-turnover ratio is among the best in the nation because he doesn't put the ball in jeopardy. He'll take a sack instead of forcing the ball, and live to throw again on the next down.

"He hasn't turned it over," OSU coach Dennis Erickson said, noting Smith's scant two interceptions in 163 passes this year and only nine in his last 616 throws. "He just doesn't, and that's what makes him good.

"He understands what's going on. He understands our offense, and the game of football. He finds a way to get it done, and keeps battling.

Yes, Palmer fits the NFL prototype; he's the guy he pro scouts, recruiting evaluators and Monday-morning quarterbacks drool about. Going into Saturday's game, he led the pac-10 in passing efficiency by a wide margin.

"We know what (Smith) can do," said Houshmandzadeh, who on Saturday hauled in five passes for 120 yards and a touchdown. "Everybody makes a big deal, `Oh, he wasn't doing this, he wasn't doing that,' " when the Beavers struggled in closer-than-anticipated wins over Eastern Washington and New Mexico.

"Now that we're doing good, (people ask) `What is he doing different than he did the first two games?' Our timing was just off. He's not doing anything different; as the weeks went on we just got it going in the right direction."

I keep hearing that Smith can't take the Beavers to the next level, that they need a Shayne House, Tyler Thomas, Derek Anderson or someone else who fits the so-called dashing-quarterback stereotype to keep progressing.

Well, I have news for you: He already has.

— He won at Pullman, a feat not accomplished by other Beaver QBs for a generation.

— And in 1999 and 2000 the Beavers blasted the defending Pac-10 champions (UCLA and Stanford) by a combined 93-13 score. In those games Smith threw for 585 yards and five touchdowns without a turnover. He also rushed for a touchdown.

What more do you want, Beaver fans?

Beaver backup center Dustin Janz, Smith's teammate at Glendora, has now played with him for seven seasons. He should know more than the average Joe in Section 13 just what makes the little guy tick where others have tanked.

Added Erickson: "I thought he would come around … You never really know, but he was going to be our quarterback, we knew that. He just kept working."

Maybe Smith's biggest attribute is his ability to play to his strengths, to put the good of the team above the good of Jonathan Smith. Yes, he wasn't sharp in the first two games but the Beavers won and kept inching ahead.

This Friday the Beavers will head to Los Angeles and a 3:30 p.m. date with UCLA at the Rose Bowl on Saturday. Prevail there — which will happen if they play as well as they did against Stanford — and OSU is bowl-eligible in general and still Pasadena-eligible in particular.

"We're still in the hunt until somebody tells us we're not, and they haven't told us that yet," Erickson said.

Certainly Smith isn't the only reason, or maybe not even the biggest reason, that you can now say Rose Bowl and Beavers in the same sentence and not looked at as some wacko candidate for a strait-jacket and a rubber room.

Tailback Ken Simonton, productive receivers and the snarly defense factor mightily into the equation, too.

But the fellow who's too small and too slow to be nothing better than a fourth-stringer at one of the Pac-10's glamour schools plays an awfully big part of it, too.

And sooner or later, you'd think that would be good enough.

To paraphrase a point famous made famous by Bill Clinton's spin doctors:

It's the final score, stupid.

The 2000 Oregon State football team will be remembered as one of the program's best ever. With this the 20-year anniversary of that season, the Gazette-Times and Democrat-Herald will look back at the season with a mix of game recaps, features and other key stories. Hopefully this will help to make up for the 2020 season being postponed due to the COVID-19 pandemic.

PASADENA, Calif. — It just might be Patrick McCall's favorite play.

Jonathan Smith threw for 324 yards and two touchdowns against Stanford.