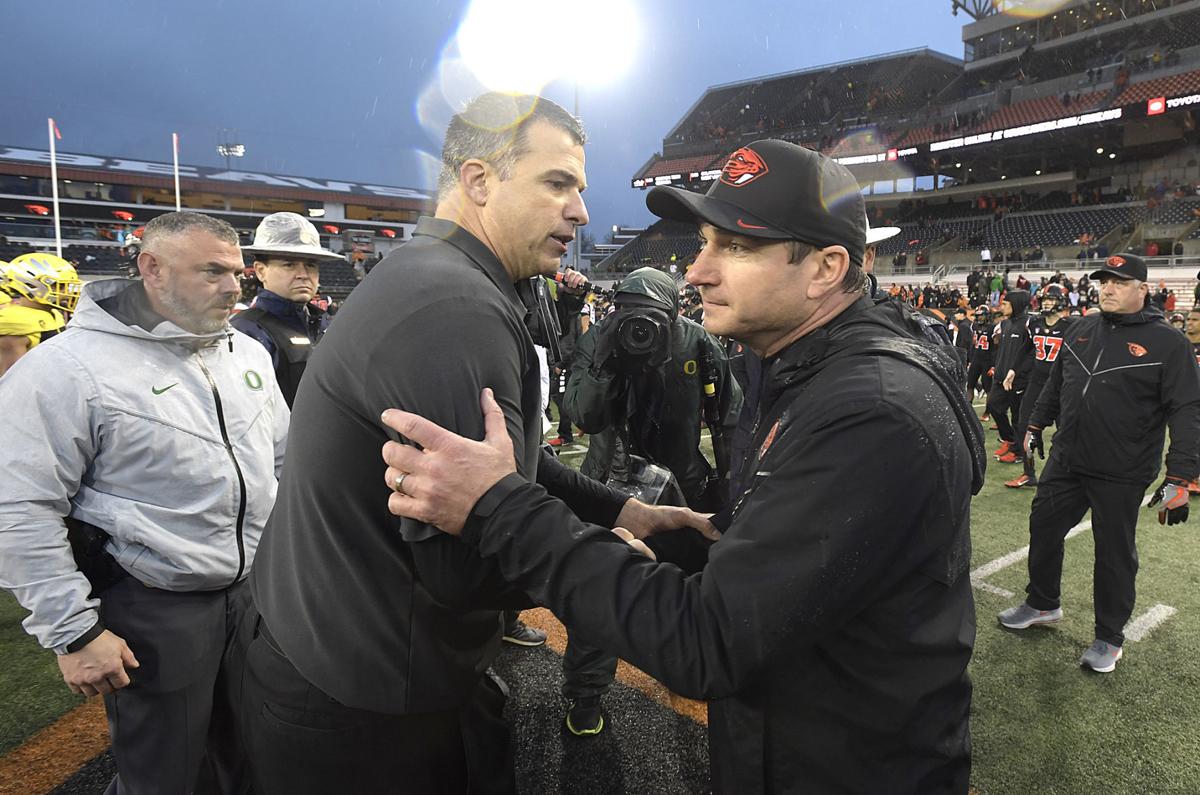 The next time Oregon coach Mario Cristobal, left, and Oregon State coach Jonathan Smith meet for their rivalry game it will have a new name after the two universities on Friday decided to stop using the term "Civil War." 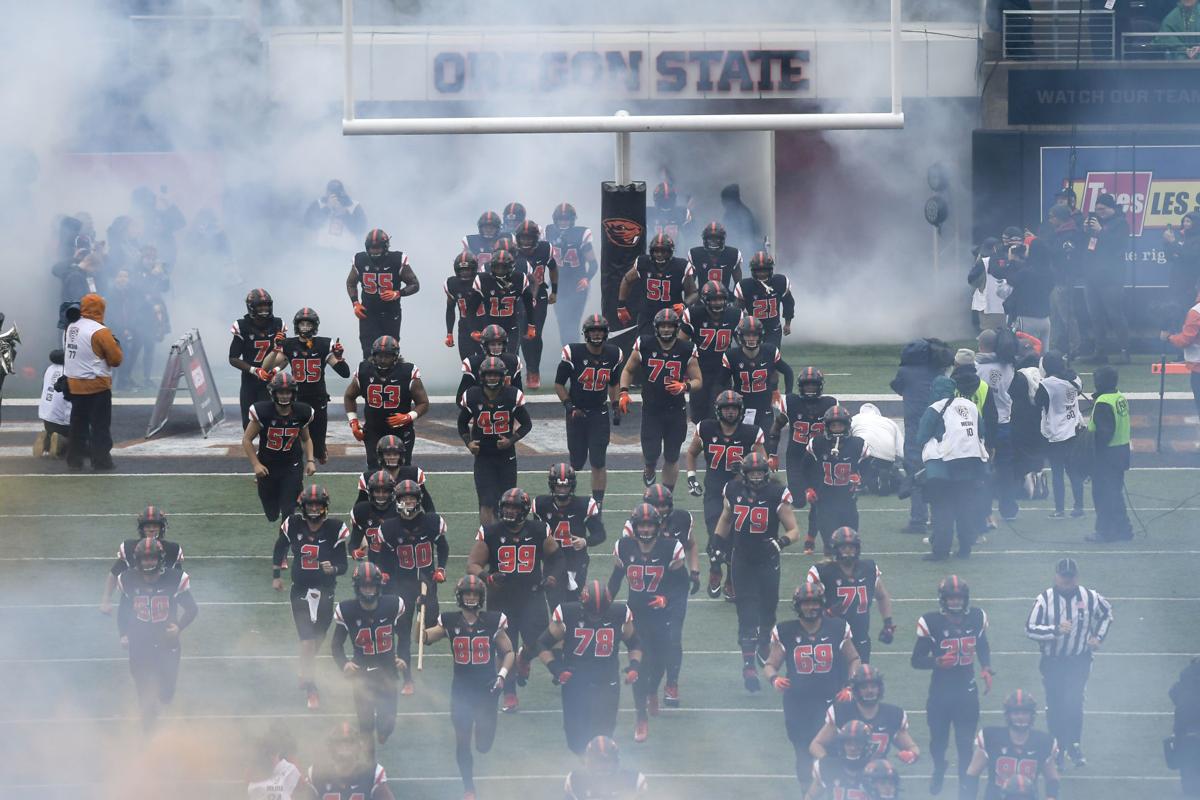 Oregon State players take the field for the 2018 rivalry game against Oregon.

When I received a text message around 8:30 Friday morning alerting me that Oregon State would announce some news about 90 minutes later, my thoughts as to what it could be went several places.

Most were associated with the coronavirus pandemic that has rocked the world, including collegiate sports.

Maybe the Beavers were going to be forced to cut some athletics programs. It’s happened at a number of institutions already.

Piggybacking on that theme, did the athletic department have to make more staffing cuts on top of the 23 positions they announced not that long ago?

Or maybe it was just a simple update on how testing for COVID-19 was going. Earlier this week the school announced that no players who had been tested in the prior week had tested positive.

My first response to the text message was: “Well, this can’t be good.”

I was assured it wasn’t bad news, but newsy to be sure.

As the clock hit 10 a.m., the press release appeared in my inbox that Oregon State and Oregon had teamed up to decide they would no longer call their rivalry games the “Civil War.”

Once I saw that, it hit me that that was the farthest thing from my mind.

But it shouldn’t have been.

Having worked on the news desk the past few months as things have obviously slowed in the sports world, I have pored over many stories about protests for racial equality and justice.

But still, that didn’t come to mind.

As we have all seen — from Black Lives Matter, to defunding the police, to systemic racism and so many other topics — each conversation seems to be more and more polarizing these days.

So I wasn’t all that surprised when I started reading on my own and the newspaper’s social media accounts that there was support for the new policy and then those who thought it was “a waste of time” and that “it was ridiculous.”

I attempt to see both sides of issues as often as possible.

And far be it from me to tell you what you should think.

But I will say that it made me take a look back at the numerous times I have talked to Black athletes at Oregon State about playing in the Civil War and what it meant.

While the rivalry was not named after the actual Civil War that tore our nation apart in the 1860s, still it never dawned on me that playing in a game with a name like the “Civil War” and what it represented could have been difficult on a deep, personal level.

While my skin color and path in life may not have made me think of the actual Civil War as anything more than something I learned about in school, it could, and certainly does, represent something far different for Black people. Something I cannot begin to comprehend.

And if for no other reason than that, I think the two universities made the correct decision to no longer use “Civil War” as the name for their rivalry game.

Some have said it should have happened much sooner. Even outgoing Oregon State University President Ed Ray noted that in the press release, stating: “While not intended as reference to the actual Civil War, OSU sports competition should not provide any misconstrued reference to this divisive episode in American history. That we did not act before to change the name was a mistake.”

Of course, not everyone agrees. That much we knew almost immediately upon learning the news.

My hope is for those on both sides that it’s an opportunity to listen and learn from those young adults that we cheer on whenever they take the field, court, etc. They were, after all, a part of the process and in favor of renaming the rivalry.

One of the most powerful moments I have witnessed in nearly 30 years covering sports took place back in February when the members of these two universities’ women’s basketball teams came together in prayer at midcourt an hour before their game after learning of the death of Kobe Bryant.

The talk after the game was about how it “was bigger than basketball.”

That was clearly evident that Sunday afternoon.

On Friday, the universities’ decision to erase the rivalry name took it a step further because this, after all, is way “bigger than sports.”

Steve Gress is the sports editor for the Albany Democrat-Herald and the Corvallis Gazette-Times. He can be reached at steve.gress@lee.net or on Twitter @stevegress19.

Two weeks into testing and only one Oregon State student-athlete has reportedly tested positive for COVID-19.

The Civil War is no more, at least in terms of the Oregon State-Oregon college sports rivalry.

The next time Oregon coach Mario Cristobal, left, and Oregon State coach Jonathan Smith meet for their rivalry game it will have a new name after the two universities on Friday decided to stop using the term "Civil War."

Oregon State players take the field for the 2018 rivalry game against Oregon.