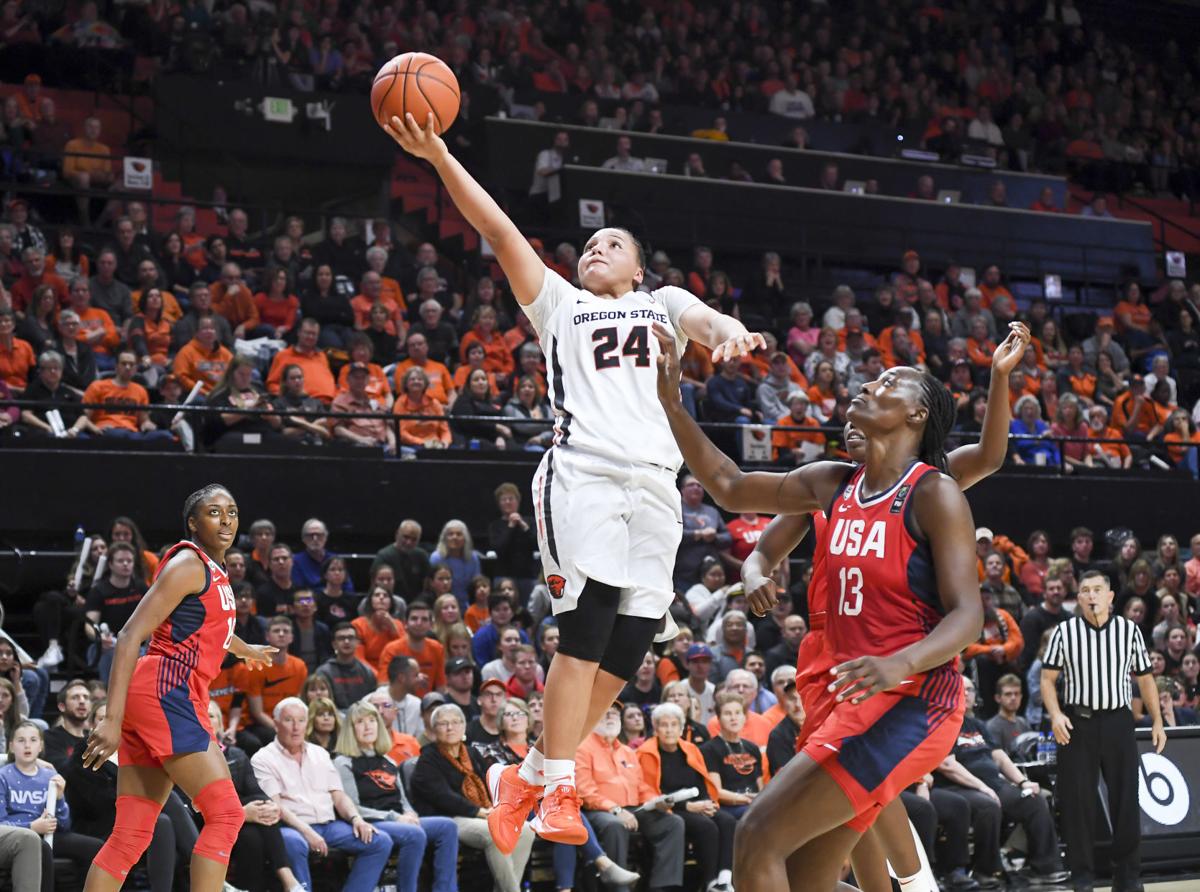 Oregon State's Destiny Slocum scores two of her team-high 15 points to lead the beavers in Monday's exhibition with the USA Women’s National Team. The Beavers hung tough into the third quarter before falling 81-58. 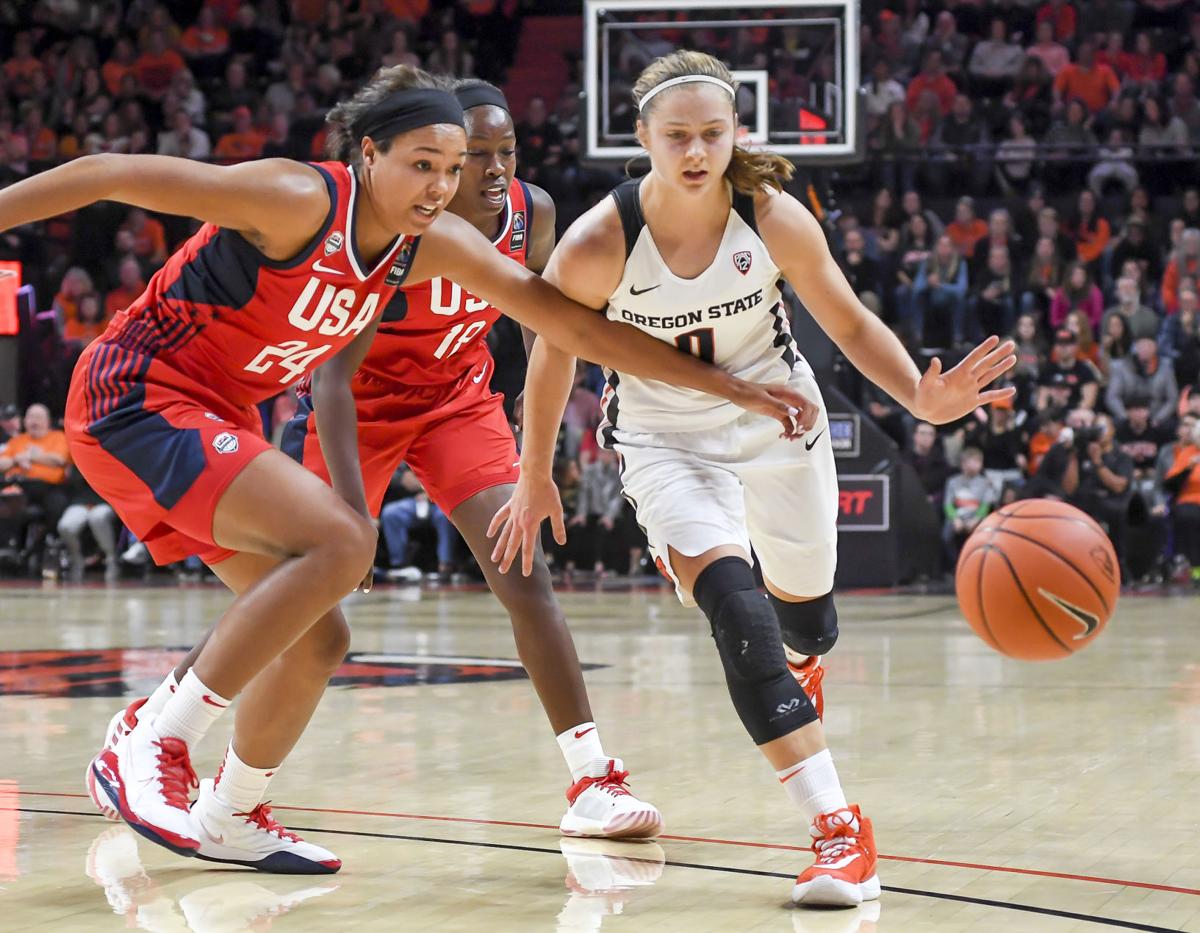 Oregon State's Mikayla Pivec battles for a loose ball with Napheesa Collier in the first half on Monday. 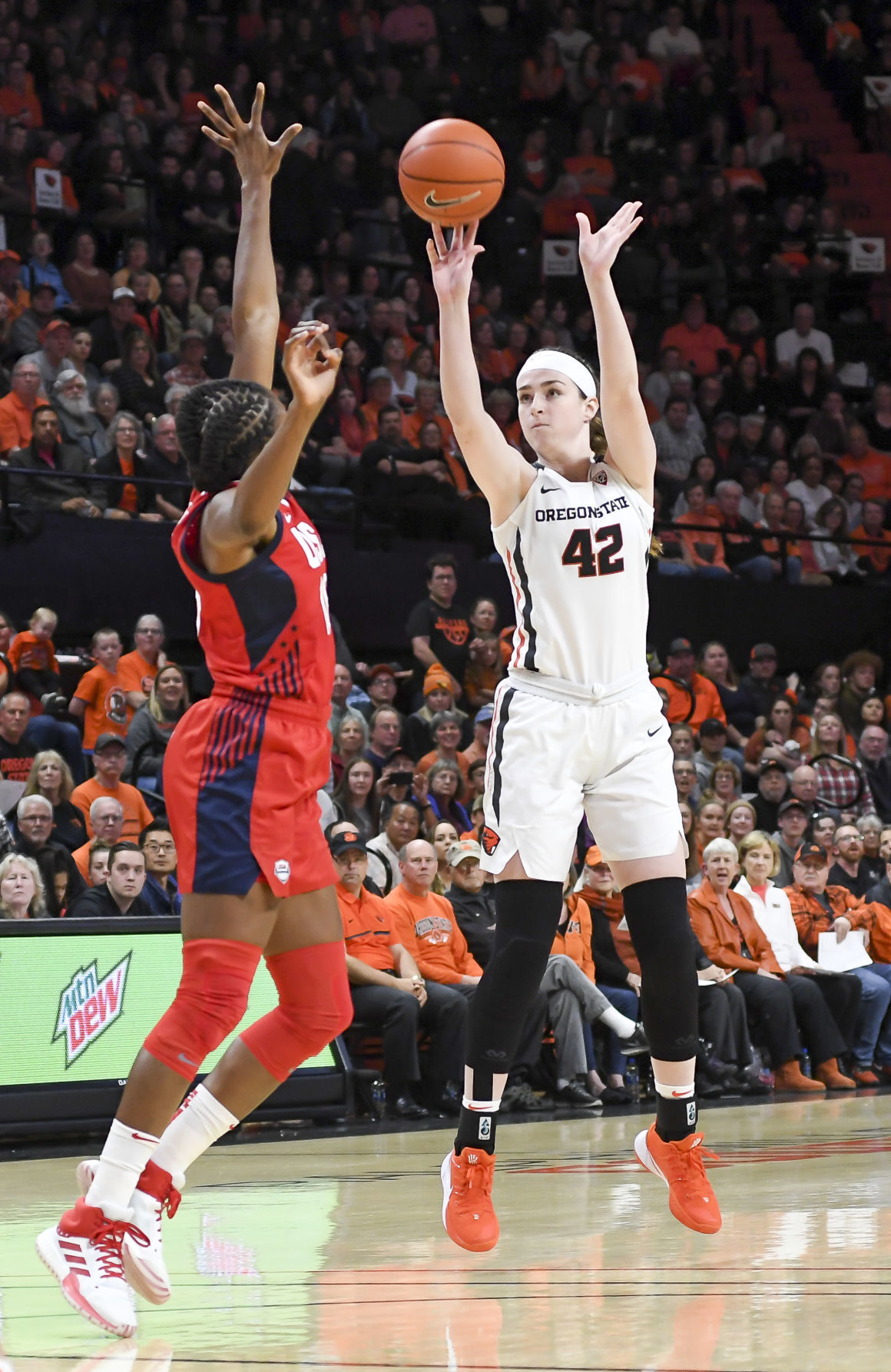 Ten years ago, the Oregon State women’s basketball program was on the verge of going dark and had to try to fill out a roster any way possible just so it could keep competing.

That was Scott Rueck’s first season at the helm.

Fast forward to Monday night and that once downtrodden program was on the floor against arguably the best women’s basketball team in the world.

It was quite a moment.

Rueck and the Beavers hosted the USA Women’s National Team in an exhibition that not only allowed the players to compete against some of the players they idolized as youngsters, but was also a bit of a celebration for just how far the program has come in the last decade.

“I’m just really proud of what Scott and what Oregon State has done with women’s basketball,” said USA co-coach Dan Hughes, who is also the head coach of the WNBA’s Seattle Storm.

“I think it has become a piece of a very good part of Oregon State and I’m just happy to be here to play a really good basketball team.”

The Beavers gave Team USA a run until late in the third quarter. But a 12-1 run to close the period turned a six-point lead into 17 for Team USA.

A’Ja Wilson led the USA with 18 points, former Stanford star Nneka Ogwumike added 17 and Sylvia Fowles chipped in 13 while Destiny Slocum had 15, Aleah Goodman 14 and Mikayla Pivec 10 for the Beavers.

The Beavers are one of four college teams to face the USA team this fall as it begins to prepare for the 2020 Tokyo Olympics. Team USA defeated Stanford 95-80 on Saturday and play Texas A&M next before taking on Oregon on Saturday.

What Rueck has been able to build at Oregon State was not lost on the national team, especially Sue Bird, who saw the program up close in 2016 when she was in Corvallis calling games for ESPN in the NCAA tournament.

Bird, now with the Seattle Storm, was a star at Connecticut and the No. 1 pick by the Storm in the 2002 WNBA draft. She compares the atmosphere surrounding the Beavers program and the community support to her time with the Huskies.

“We felt like every resident in Connecticut’s little daughter or maybe granddaughter, something like that," Bird said. "And to feel that kind of love, it’s just this connection that you then have with the university and then it has with the community and from there it can grow.”

Wilson, the No. 1 pick by the Las Vegas Aces in the 2018 WNBA draft and a star at South Carolina, has followed the Beavers’ success.

While she never faced Oregon State while in college, both the Gamecocks and Beavers were in the Stockton Regional in 2017 and could have faced off in the Elite Eight.

But the Beavers fell to Florida State while South Carolina went on to win the national title. On Monday, Wilson described the Beavers as a sleeper team.

“They were that team that we can’t sleep on them," she said. "They were like that dark horse. I never had an opportunity to play against them but we did scout them when they were playing FSU. Just watching them I’m like this team is good, they’re big. Those are teams that sneak up on you.

“So just to see this program grow and see the coaching staff really just build this family is huge. The sky’s the limit for a team like this. They are on the map.”

Napheesa Collier was a freshman in 2016 when the Beavers fell to her UConn team in the national semifinals. She also saw the Beavers live last year in the Sweet 16 when both schools were in Albany, New York.

She said Monday she watched the Beavers this past spring and they made a big impression on her.

“They are really good, they have a lot of great shooters, Destiny Slocum is a great attacker, great finisher,” she recalled. “And the environment in this place (Gill Coliseum) is what I really remember from those games, just how loud it gets and how much support they get from their school.”

Hughes and Bird both said recruiting has been a key to the Beavers’ ability to remain at the top of the women’s college basketball world the last few years.

“(Rueck’s) done a phenomenal job of that year after year, basically re-upping every time he loses some great players he gets another batch in,” Bird said. “So their success is really not that surprising."

Hughes said he has talked with Rueck a lot the past couple years as the draft draws near. Four Beavers have been taken in the last four years and both Mikayla Pivec and Slocum, a redshirt junior who is draft eligible, have been on many preseason mock draft lists.

“I love the fact that he recruits across the world as well as Oregon and the Pacific Northwest,” Hughes said. “He’s developed players and that’s what we all try to do, we try to get good players and then develop them.”

Oregon State has been a big part of the growth of the sport the past few years. UConn’s win in 2016 capped four straight titles, but there have been three different champions — none of them Connecticut — the last three years. It could easily be a fourth different champion this season and the Beaver are in that discussion entering the season.

“Parity in any sport is always good,” Bird said. “I think what UConn has done with their greatness with success has set a bar, which I also think is good. I have no problem with that, not even because I’m from there.

“So now other programs have something to model themselves after. This is what success can look like if you do it the right way, but also do it in your own way, which is something I think Scott has also done here. So it’s great for women’s basketball.”

OSU women's basketball: Mannen finds an unexpected home and holds her own with the Beavers

OSU women's basketball: No. 7 Beavers set to face No. 18 DePaul in semis

It may only be the second week of the season, but it should have the feel of March inside Gill Coliseum on Thursday night.

Midway through the second quarter of No. 7 Oregon State’s showdown with No. 18 DePaul Thursday night, the officials gathered around the monito…

Oregon State's Destiny Slocum scores two of her team-high 15 points to lead the beavers in Monday's exhibition with the USA Women’s National Team. The Beavers hung tough into the third quarter before falling 81-58.

Oregon State's Mikayla Pivec battles for a loose ball with Napheesa Collier in the first half on Monday.