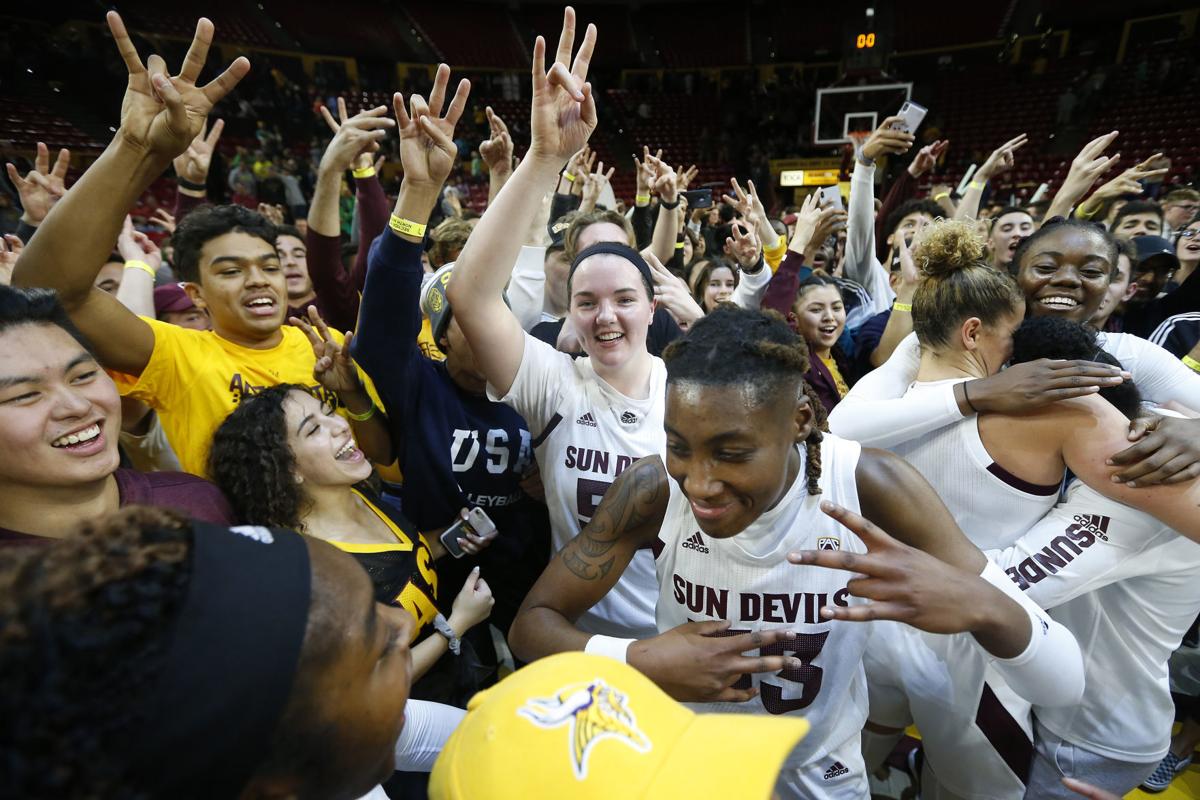 Arizona State's Ja'Tavia Tapley (33) and teammates celebrate with fans after the Sun Devils upset No. 2 Oregon 72-66 on Friday. ASU had a similar celebration on Sunday after upsetting No. 3 Oregon State. 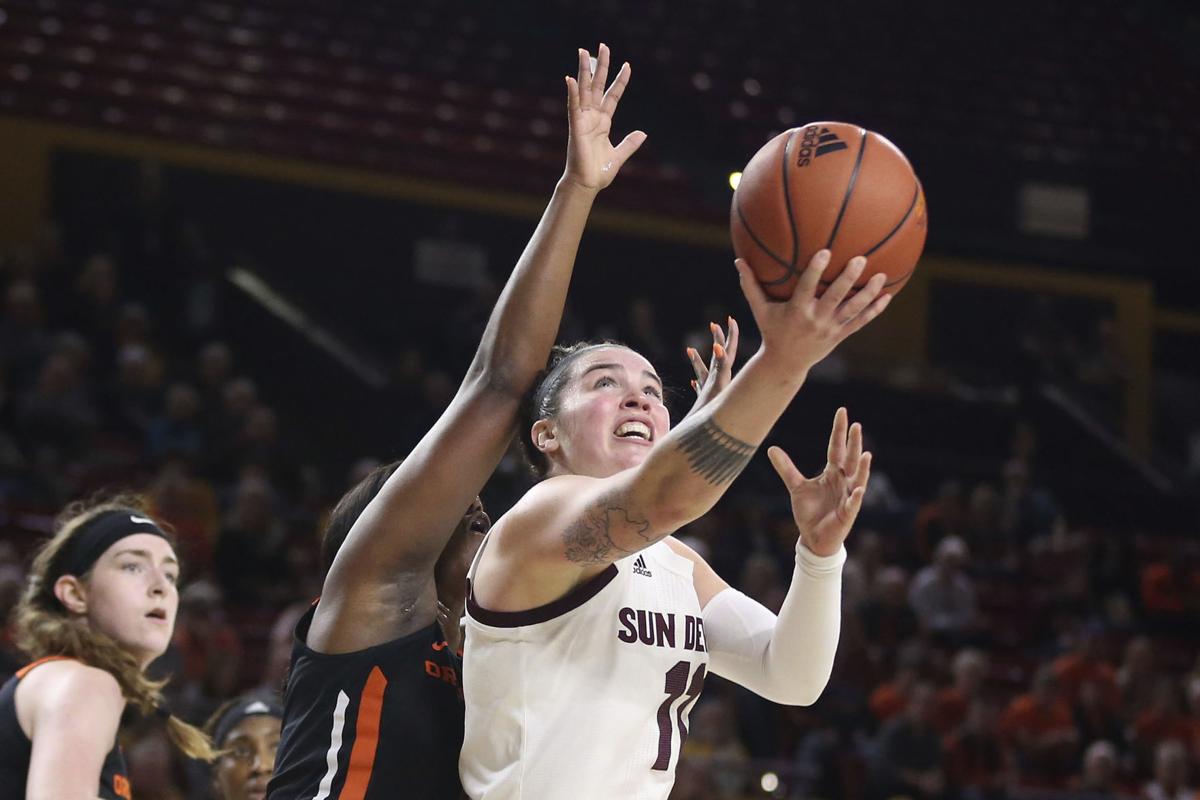 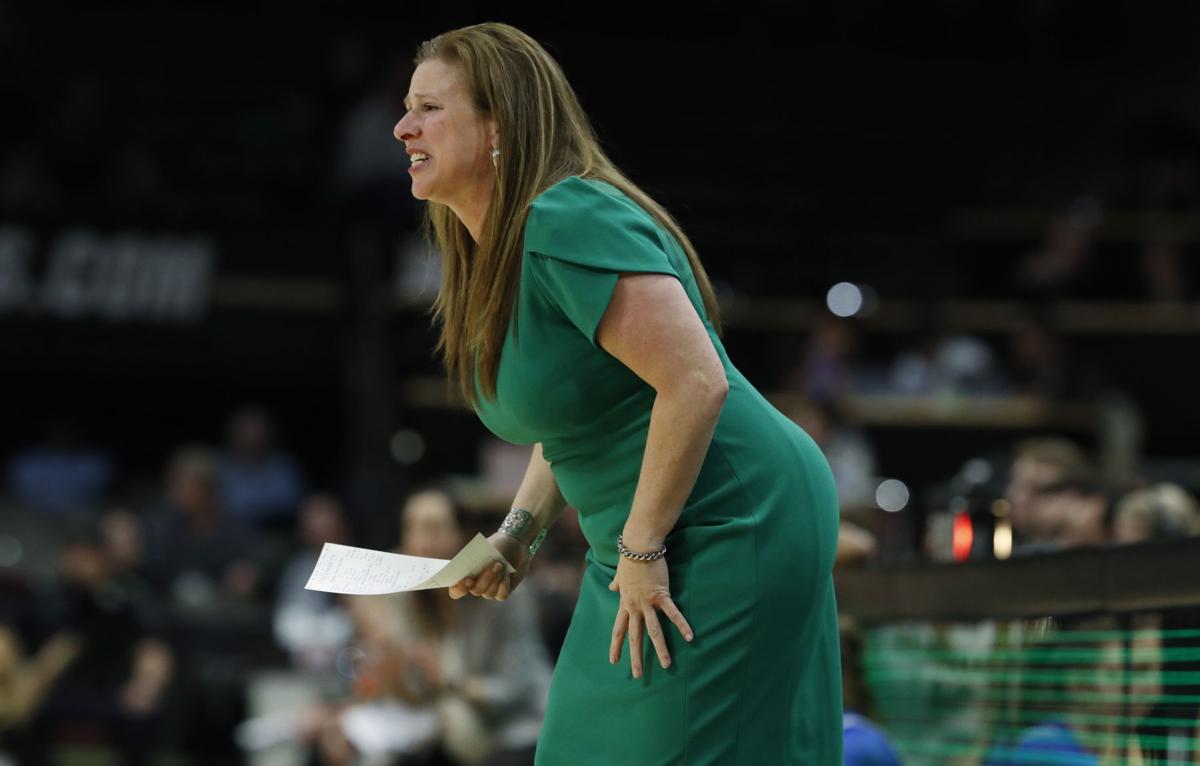 Coach Cori Close has UCLA off to its best start at 16-0.

What a weekend for the Sun Devils, who pulled off a monumental women's basketball sweep of then-No. 2 Oregon and then-No. 3 Oregon State.

“We’ve been playing better,” ASU coach Charli Turner Thorne said. “I definitely felt good we could have success this weekend. Both of them are great programs, but so are we.”

It was the first time since 2010 that a team beat two top-five teams back to back in the regular season. Stanford accomplished that feat by defeating No. 4 Xavier and No. 1 UConn.

The stunning weekend sweep propelled the unranked Sun Devils (13-4, 3-2) to a No.18 ranking in the AP poll released on Monday.

“With this team, we have really great potential,” Arizona State’s Jamie Ruden said. “So I don't even think about limits or what we can't do. I think we're doing a good job of just showing up and focusing on what we can control.”

The Sun Devils have had to replace their top two scorers from last season, Kianna Ibis (14.1) and Cortney Ekmark (10.3). But the addition of senior Ja’Tavia Tapley, a transfer from USC, has helped offset those losses.

ASU lost games early to Minnesota (on the road) and Purdue (neutral site) before dropping two of its first three Pac-12 games against ranked teams Arizona (at home) and UCLA (on the road) before the weekend sweep of the Oregon schools.

The Sun Devils’ victory over the Beavers cost Oregon State a shot at being named No. 1 in the AP poll. It was also the fourth straight win over the Beavers, and would likely have been the fifth straight had it not been for Marie Gulich’s herculean effort at ASU when she dropped 36 points in a 64-60 win in 2018.

Since Scott Rueck has been at Oregon State, the Sun Devils hold a 9-8 edge in a tightly contested series. The Beavers had won seven straight prior to the four-game slide.

“We always have great games with them,” Turner Thorne said. “Both teams are always really good defensively so both teams are used to being able to position themselves to win, then it’s just who kind of steps up and takes it.”

“We have a lot of great teams, including us, in our conference,” Turner Thorne said. “Clearly, we were young and injured early, but we've gotten healthy.”

With Oregon State’s loss on Sunday, UCLA, which edged Colorado 65-62 in Boulder, is the last remaining undefeated team in Division I women’s basketball.

UCLA has just one game this week — at USC on Friday — and hosts the Washington schools the following week before travelling to Arizona.

The Bruins, who are atop the standings, only play the Bay Area and Oregon schools once, which could be a big advantage.

The losses by Oregon and Oregon State may have put a small damper of this weekend’s showdowns with Stanford as far as rankings go, but not in terms of importance.

The Cardinal head to Oregon on Thursday for a nationally televised game with the Ducks (6 p.m., ESPN) and then play at Oregon State at noon on Sunday on the Pac-12 Network.

Stanford will have one extra day to prepare as the Beavers play host to California on Friday night.

The Beavers fell from the No. 1 overall seed in Charlie Crème’s bracketology to a No. 2 seed but remain in the Portland Regional. OSU has been the No. 1 seed in that regional the past couple weeks.

UConn is now the No. 1 seed with a slightly better resume that the Beavers, according to Crème. Arizona is a No. 6 seed in Portland.

Oregon is the No. 2 seed in the Greenville Regional where South Carolina is the No. 1 seed. ASU is now the No. 5 seed in that regional.

Stanford coach Tara VanDerveer win her 500th conference game on Friday at home against Cal to become the first women's coach to accomplish that in one conference.

Plenty of her former players were on hand for the milestone victory.

“It is fun to share something like that with them because they were such a big part of championships," VanDerveer said. “I'm about this team and how hard they're working and how much they're improving and just the fact they're listening and trying to do what we're asking them to do."

Players of the week

ASU's Tapley averaged 15 points and six rebounds in the wins over the Ducks and Beavers to earn the conference's player of the week honor.

Stanford guard Haley Jones was named the freshman of the week after averaging 19 points and three assists in a sweep of California. It's her third honor and ties her with Oregon State's Taylor Jones for the most this season.

For so many years, the most difficult road trip in Pac-12 women’s basketball was to the Bay Area, where teams had to contend not only with per…

Pac-12 women's basketball: Stanford shakes off slow start to get split in Oregon

Coming off a 32-point loss to Oregon on Thursday night, there were some questions as to how a young Stanford women's basketball team would res…

Arizona State's Ja'Tavia Tapley (33) and teammates celebrate with fans after the Sun Devils upset No. 2 Oregon 72-66 on Friday. ASU had a similar celebration on Sunday after upsetting No. 3 Oregon State.

Coach Cori Close has UCLA off to its best start at 16-0.