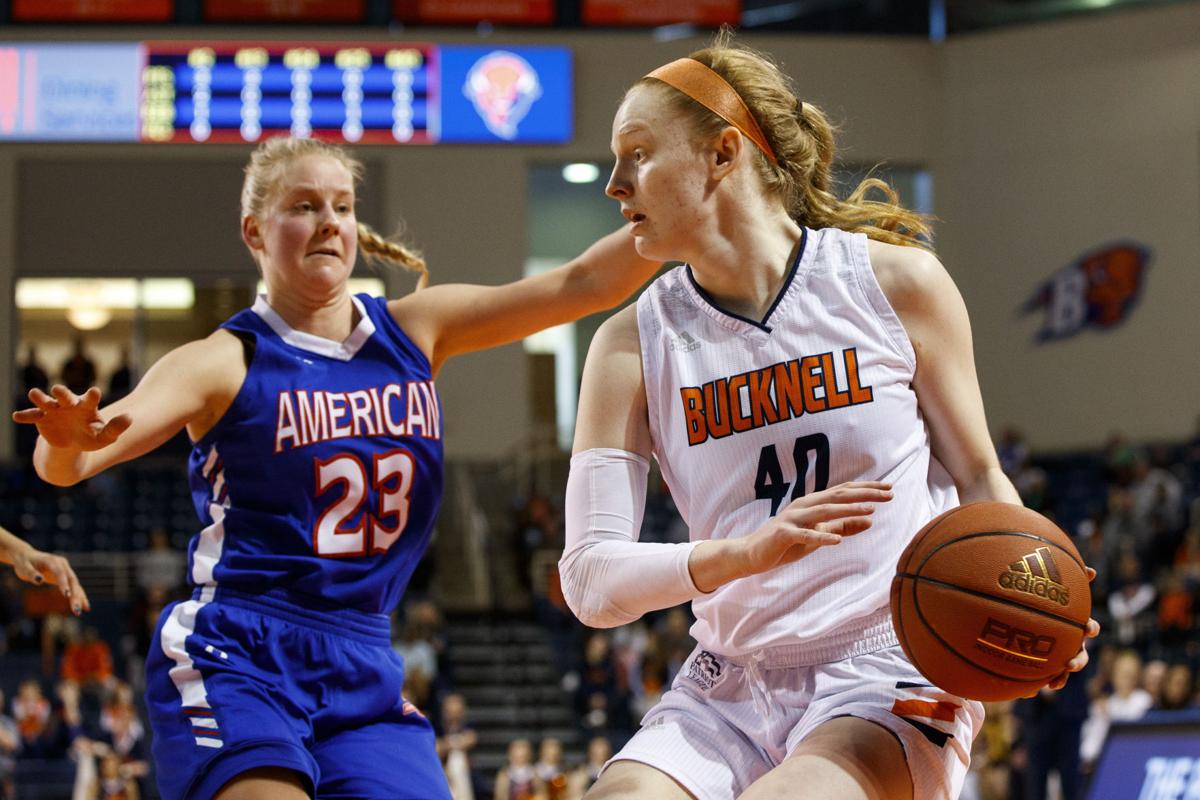 Oregon State's Ellie Mack, right, was the Patriot League player of the year last season at Bucknell. Mack, who is a grad transfer, avearged 11.1 points per game in three seasons for the Bison. 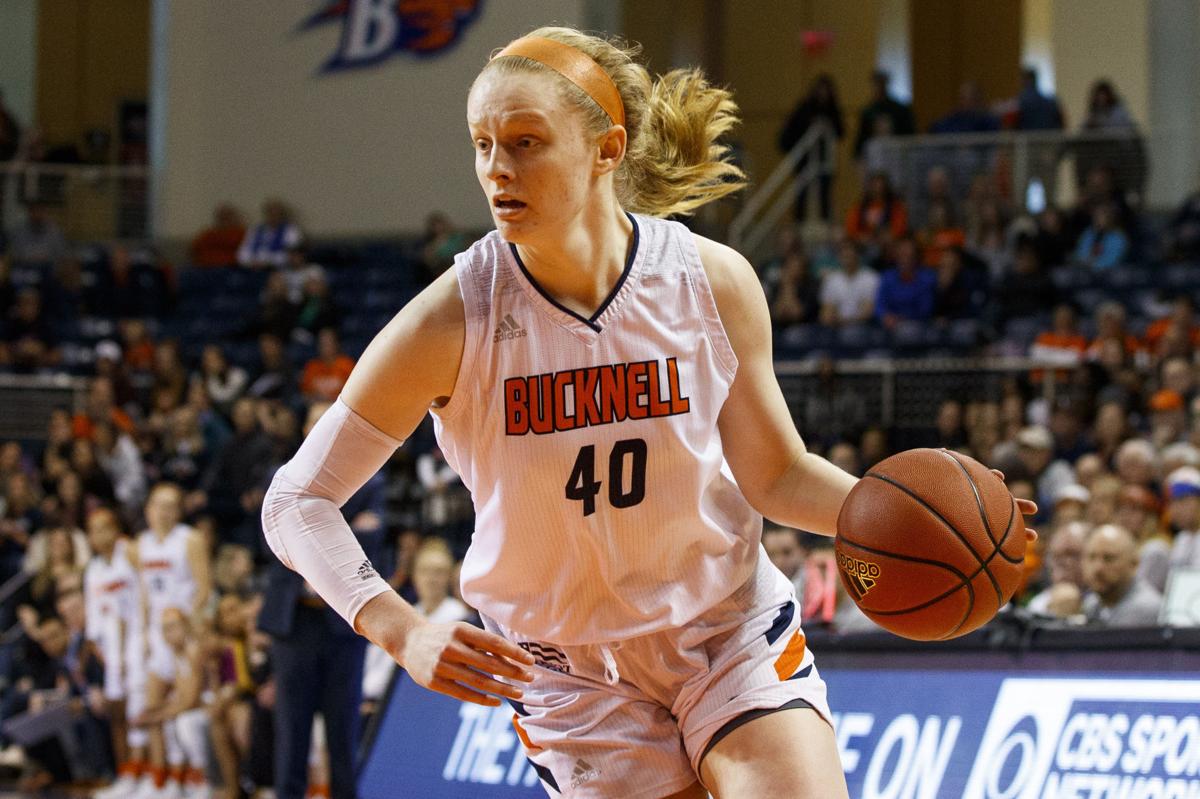 Ellie Mack was on her way to winning the Patriot League’s women’s basketball player of the year award as a redshirt junior last year but she knew her final season of college eligibility would be played somewhere else.

Mack, a 6-foot-3 forward who led Bucknell in scoring (15 points per game), rebounding (6.5) and assists (2.4) last season and scored in double figures in all but three games, had the Bison poised to win a second straight conference tournament title and another trip to the NCAA tournament.

But like just about everything else in March, the coronavirus pandemic eradicated any chances of that, and it also prematurely ended Mack’s time playing for the school located in Lewisburg, Pennsylvania.

What would make Mack want to leave such a seemingly positive situation? It’s not that she didn’t enjoy her teammates and coaches, or that she was going to graduate in May.

You see, Bucknell has a rule in regard to players getting a fifth year unless meeting certain requirements. Mack, who took a redshirt her first season on campus after tearing her right ACL and missing the season, did not meet those requirements.

Even if a fifth year were possible, Mack may have decided it was time to test the waters elsewhere.

“I felt like I had kind of outgrown my situation there and even though I really loved my teammates and coaches and just the entire atmosphere there, it was just time for me to kind of challenge myself again,” Mack said last week.

In three seasons at Bucknell, Mack played in 95 games, making 62 starts — all came in the last two seasons — and had a career average of 11.1 points per game. She averaged 5.6 rebounds over that time as well.

Not bad for a player who had only a few offers coming out of high school.

Being a grad transfer during a pandemic couldn't be easy, but when Oregon State became a part of her recent recruiting process, Mack said “it was pretty much just a no-brainer" even though it was a destination far from her roots of Paoli, Pennsylvania, located northwest of Philadelphia.

“It was going to be really hard just because Corvallis, Oregon is a place that I'd never been before and completely on the other side of the country," she said. "But coach (Scott) Rueck and everyone else here just made it seem so welcoming and it’s just the right next step for me.”

Mack knew there would be a chance she could crack the starting lineup with the number of players the Beavers were losing — four seniors used their eligibility and two other players transferred — but she didn’t expect any preferential treatment.

“I didn’t want any guarantees, I just needed an opportunity and I felt Oregon State provided that,” Mack said. “I also know that there are so many good players on the roster. Aleah (Goodman) and Taylor (Jones) are going to be great so it’s not like we’re completely rebuilding.

“I just have so much confidence in our ability.”

So what will fans see when they get to either watch her play in person if that becomes an option or on television.

“My ability to shoot allows me to get in the paint because people have to guard me so close,” she said. “Hopefully create space for other people on my team, too, by not letting defenders sink in, get to the paint or double teams, things like that.

“Overall I think I’m a competitor and I try to think the game because I’m not going to be the fastest or the strongest in the Pac-12 so I really have to outsmart my opponents.”

Ah, the Pac-12, a conference that has four teams in the AP preseason poll and a fifth, Oregon State, at No. 18. It will definitely be a step up in competition for Mack, but she’s looking forward to the challenge.

She’s already seen how much more difficult the Pac-12 will be just from facing her teammates in practice. The major difference — the size she will see. That and the speed of the game.

The past seven or eight months have been quite a whirlwind for Mack, who graduated in May and then moved out to Corvallis in July. She’s had to adjust to new surroundings and a new team all while not knowing exactly when the team will play as no schedule has been released by the Pac-12.

“There’s been so much uncertainty. Even when I committed there was a period of time I had no idea if I was even going to come out … if we were even going to play, what’s the schedule going to look like, things like that,” Mack said. “So that part’s been weird but I think that everyone has just had this really good, positive attitude of just work hard every day, because you never know what's going to happen next and you just want to be as prepared as possible for our season.”

Whenever Mack is able to put on the jersey for the first time in an actual game, she knows it will be special.

“I can’t wait,” she said, noting she is tired of going up against her new teammates each day. “… And yeah, I'm just excited to get this all started.”

The No. 18 Oregon State women’s basketball team will open Pac-12 play at home against Utah on Dec. 4, the conference announced on Wednesday.

Oregon State's Ellie Mack, right, was the Patriot League player of the year last season at Bucknell. Mack, who is a grad transfer, avearged 11.1 points per game in three seasons for the Bison.