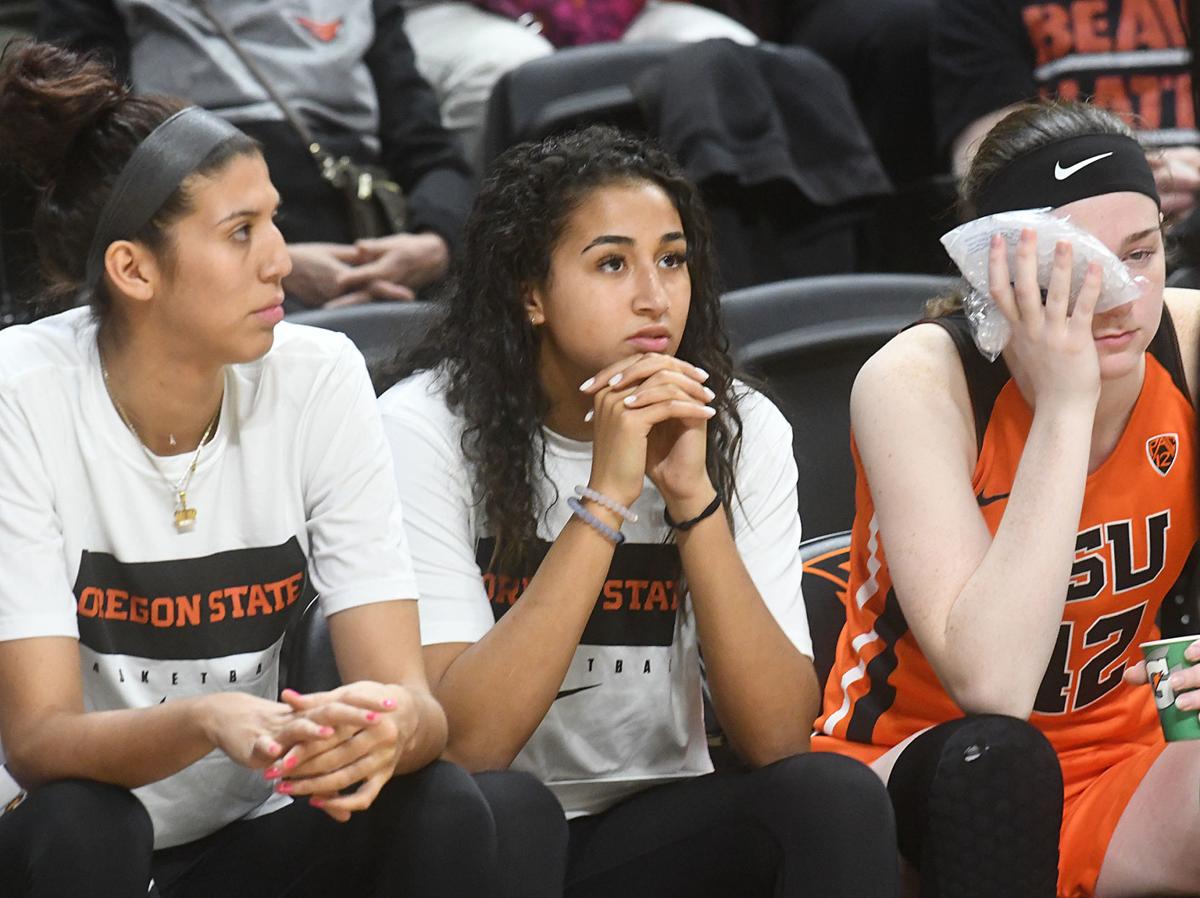 Oregon State's Taya Corosdale sits on the bench in between Andrea Aquino and Kennedy Brown last season as she missed the year with a leg injury. 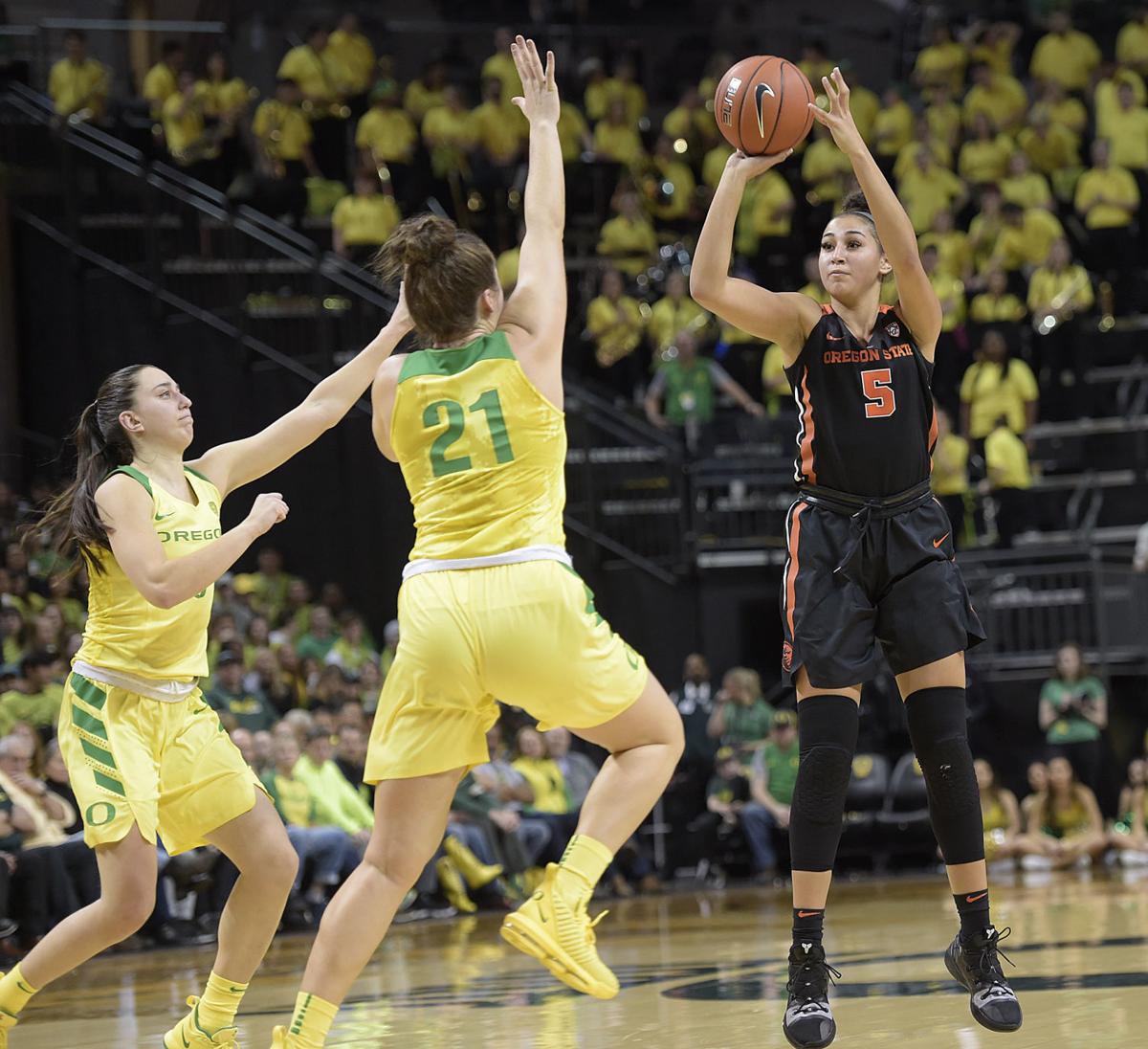 Taya Corosdale, right, shoots a 3-pointer over Oregon forward Erin Boley back in 2019. She missed all but two games of this past season. 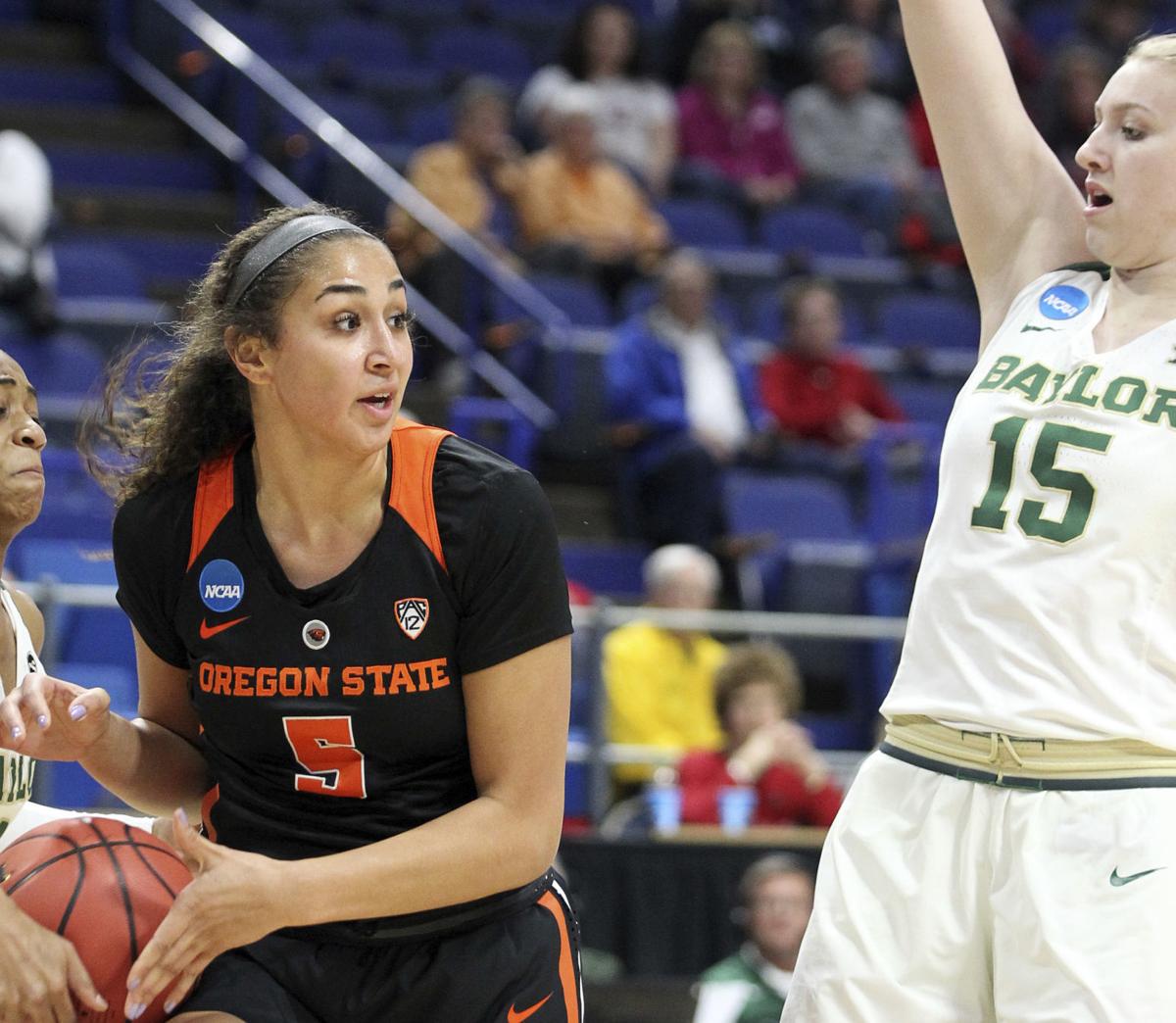 Oregon State's Taya Corosdale (5) looks for an opening as Baylor's Lauren Cox (15) defends during the first half of an NCAA women's tournament game in 2018. Corosdale started her first two seasons before suffering a leg injury this past season.

Taya Corosdale had a difficult decision to make a couple months back.

When Oregon State decided to go to online only classes for the spring term due to the COVID-19 pandemic, Corosdale had to choose between staying on campus or heading home to Bothell, Washington.

Corosdale admits she was a tad bit hesitant to head home since that area of Washington had been hit hard by an outbreak of coronavirus cases.

She’s also had to deal with her rehab from a leg injury that cost her all but about five quarters during the past women’s basketball season.

“It's been weird, I guess I don't really know,” Corosdale said in a phone interview last week. “I'm trying to like follow the schedule and stay into the groove of things. But it's hard. I want to see my friends, I want to see my teammates, meet my new teammates and be on campus enjoy the nice weather.”

Corosdale, who was a projected starter for a third straight season, battled a hamstring injury a couple weeks prior to the start of Oregon State’s regular season — she missed an exhibition against Team USA — and went down with her season-ending injury in just her second game back.

Back in January, Corosdale said she expected to be back doing basketball-related activities by about this time — the middle of May.

And while she said her rehab has gone well — she’s met virtually every week with her physical therapist and athletic trainer — she feels as if she is behind where she had hoped to be by this point.

“We kind of go over my exercises and my rehab that I do weekly, like my cardio and incorporating basketball the best I can,” Corosdale said.

That last part — incorporating basketball — has been a bit of a struggle at times. She can’t just waltz into Oregon State’s practice facility, either by herself or with a teammate or two, and get to work.

“A lot of Seattle hoops actually have been taken down but luckily by my house there are a few that are still up and so I can still go over there,” Corosdale said.

“It's hard because originally this probably would have been about the time that I would have been getting going. But since this all happened everybody's kind of their own right now and it's kind of hard to get back into things the way I probably normally would from this injury.

“I wouldn't say I'm behind in my rehab just because of all this, but it's definitely like paused some things.”

Don’t fear, though, Corosdale says as she has every intention of being ready to go for the season, even if it actually starts when it is supposed to.

Still, it’s not been easy and really hasn’t been since late October, early November when she started to deal with her injuries.

“It’s a good thing I’m a patient person,” Corosdale said with a laugh. “I mean this whole year has been pretty frustrating for me. But with what the circumstances are and kind of everybody being home it gives me a little more ease in that OK everybody's kind of at home, probably doing workouts. But I feel like I'm missing too much right now. … I just can't wait until we finally can do stuff together. I'm being really patient.”

Through that patience and forced time off the court, Corosdale said she has been able to look at the game differently and learn even more from her time on the sidelines.

“I just learned how detailed this game is and when defending people just how articulate you have to be when you're defending them,” she said. “Watching my teammates do a really good job of that this year was really cool to watch. So that’s something I definitely took away.”

While it has not been the ideal situation, to say the least, when it comes to basketball, Corosdale has embraced the journey and is enjoying a renaissance of sorts in regard to her relationship with her parents.

Sure, they made most of her home games in Corvallis and her mom was able to attend many of the road games over the past couple years. But the past two months sequestered at home together has been a time to bond on a deeper level.

“It’s been good to spend this time with them because usually like the combined amount that we've been in quarantine is probably like our summer break,” she said. “And so that's been nice to kind of get that a little earlier than usual.”

An only child, Corosdale said she has spent plenty of time cooking and exercising with her parents.

“I do feel like I'm kind of meeting them again,” she said. “… I'm used to seeing them maybe a couple times, maybe once a week during basketball season but other than that not much, so it's been really nice.”

And she can’t wait to get back to Corvallis and meet up with her old and new teammates and get ready for the start of the season — whenever that might be.

“I think it'll be fun when we all come together finally,” she said. “But we keep in touch often so it's not like we're isolating from each other. We're trying to stay in contact and get to know each other and do what we can during this time.”

Corosdale will have two more seasons to play after she was awarded a redshirt for missing this past season. It wasn’t a surprise, and Corosdale said knowing she would undoubtedly get that season back helped her through some of the tough times.

“That was one thing that kept me very sane during the injury was at least I know I get my year back,” she said. “… I’m just so excited to get that year back and get out there again.”

Former Oregon State standout Mikayla Pivec has decided to sit out the 2020 WNBA season for personal reasons, according to a tweet by the Atlan…

Oregon State's Taya Corosdale sits on the bench in between Andrea Aquino and Kennedy Brown last season as she missed the year with a leg injury.

Taya Corosdale, right, shoots a 3-pointer over Oregon forward Erin Boley back in 2019. She missed all but two games of this past season.

Oregon State's Taya Corosdale (5) looks for an opening as Baylor's Lauren Cox (15) defends during the first half of an NCAA women's tournament game in 2018. Corosdale started her first two seasons before suffering a leg injury this past season.