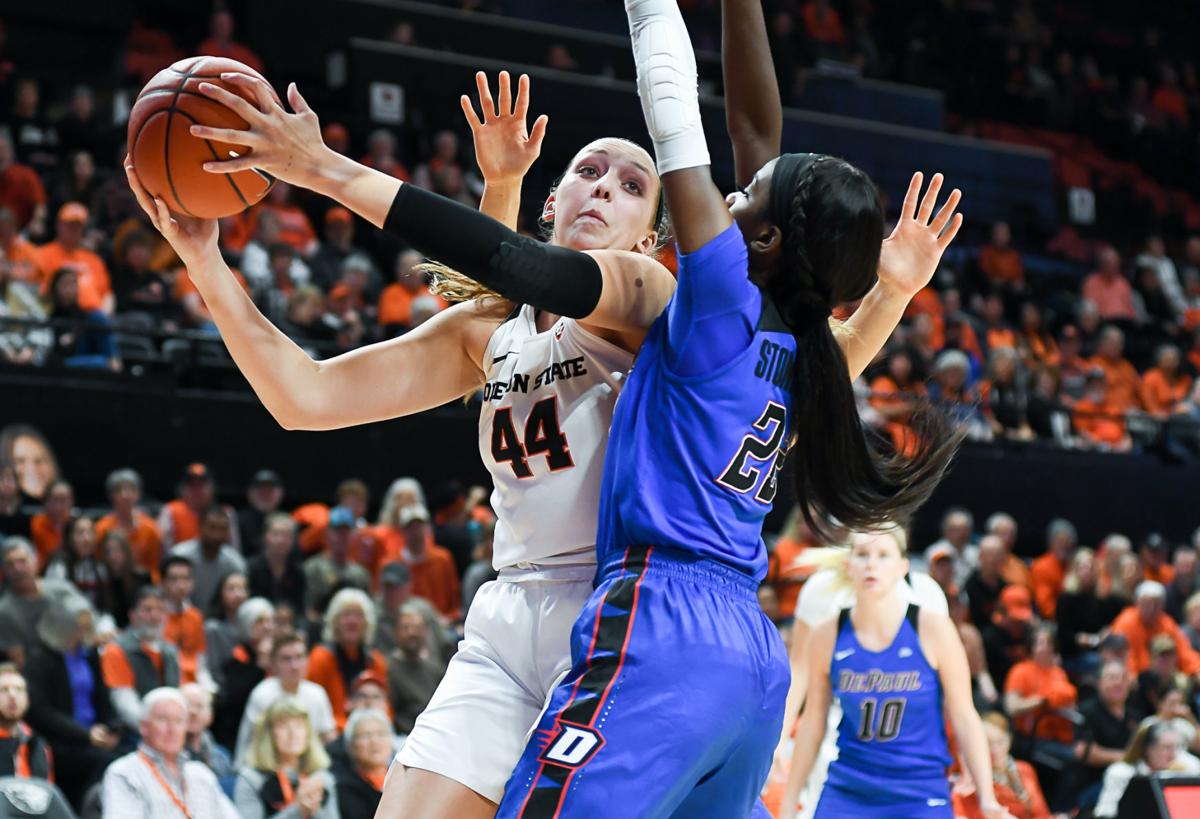 Taylor Jones had 24 points to lead Oregon State in the 98-77 win against No. 18 DePaul in the preseason WNIT semifinal at Gill Coliseum on Thursday. 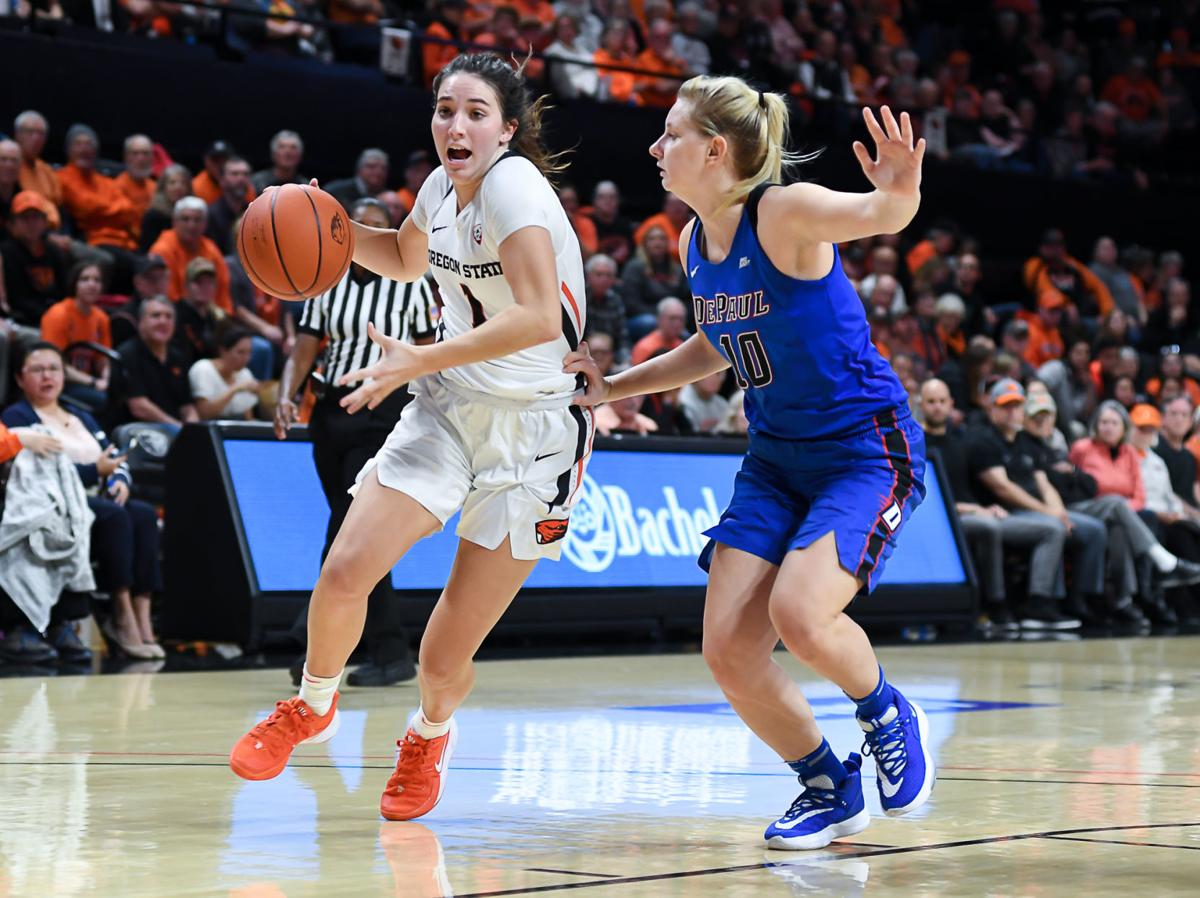 Oregon State's Aleah Goodman hit a half-court 3-pointer at the end of the third quarter and finished with 16 points. 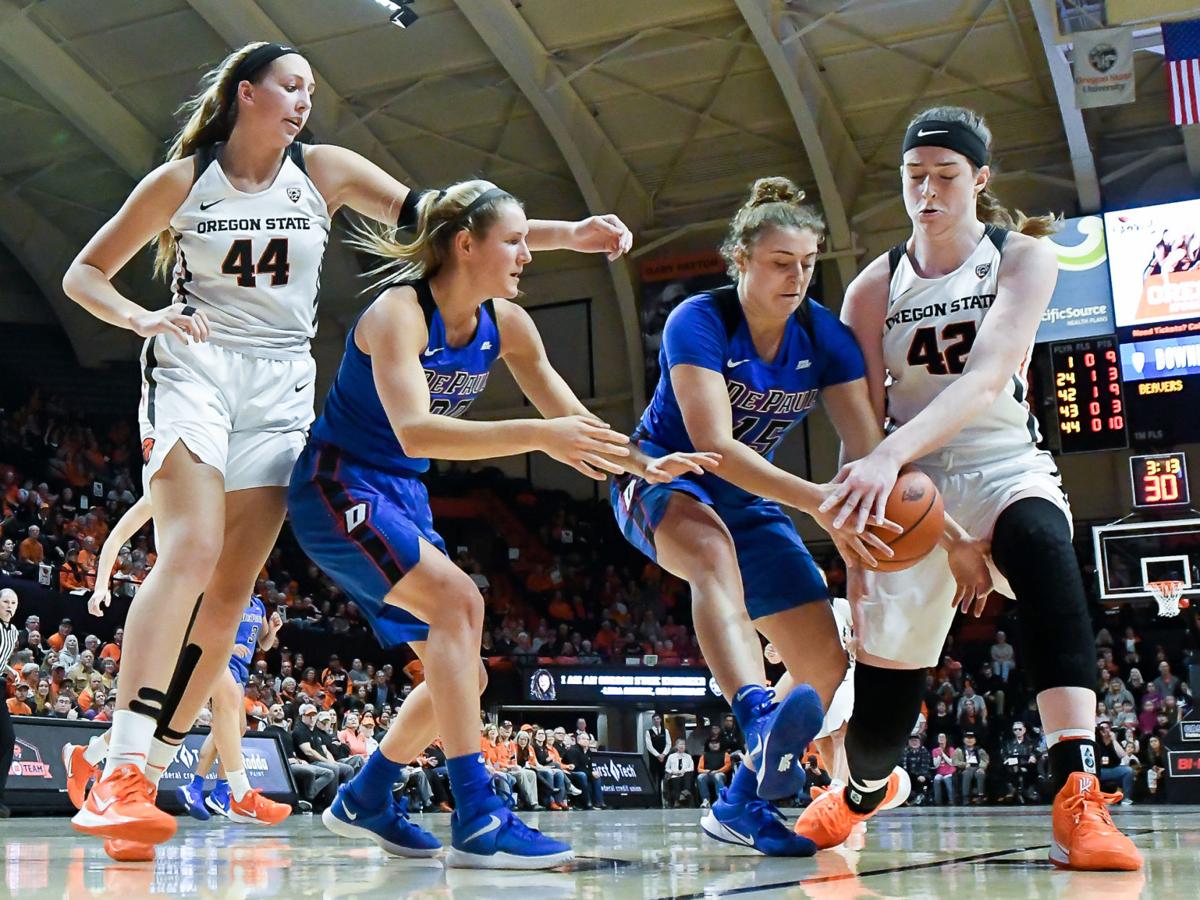 Midway through the second quarter of No. 7 Oregon State’s showdown with No. 18 DePaul Thursday night, the officials gathered around the monitor to review a call.

When they announced Mikayla Pivec had been whistled for her second offensive foul, it meant the Beavers’ do-it-all star would be sitting on the bench in a tie game.

It didn’t stay tied for long.

The Beavers blitzed DePaul with a 19-4 run over the final six minutes of the half and were never seriously threatened after in a 98-77 women's basketball victory in the semifinals of the Preseason WNIT.

Oregon State (3-0) will welcome in Missouri State to Gill Coliseum for the title game at 1:30 p.m. Sunday. The Bears outlasted Oklahoma 96-90 earlier Thursday.

“When a player like Mikayla Pivec goes out you need everyone to step up and I’m really proud of our team because that’s what we did,” Aleah Goodman said.

The run began with Goodman and Kennedy Brown hitting back-to-back 3s to put the Beavers up 33-27 with 4:51 left in the half.

It was just the beginning. A Brown steal and layup was followed by back-to-back 3s from Jasmine Simmons and Destiny Slocum and all of a sudden the Beavers led 41-27 lead.

“Everyone stepped up, hit big shots,” Goodman said. “Jaz hit a shot, Des hit a shot and everyone just played confident and we kind of played within ourselves. When a player like that goes down we all know we need to rise.”

DePaul, a perennial NCAA tournament team, never quit but was no match for the firepower the Beavers displayed on Thursday.

OSU finished with six players in double figures, led by Taylor Jones with 24. Goodman added 16, Slocum had 15, Brown 13 and Simmons and Pivec each added 10.

Until the closing run of the half, the Beavers and Blue Demons (2-1) were in a back-and forth battle. Oregon State struggled early with DePaul’s press and committed six first-quarter turnovers.

Coach Scott Rueck said the first quarter was going to be a feeling out process for his team, which had just one day to prepare for the Blue Demons.

"I felt like it was just a process to figure them out and what was going to work and what wasn’t and how to handle their press and what shots to look for,” he said. “I thought we flowed from press break into our offense much better as the game wore on.”

The Beavers got a lift from the return of Kat Tudor, who took the court for the first time since tearing her ACL on Jan. 4. She entered in the first quarter to a standing ovation.

Tudor, who could only play limited time, was 0 for 3 from the floor in almost 11 minutes.

Taya Corosdale, who had been out a while with a hamstring injury, also returned to the court for the first time this season. She finished with three points and seven rebounds in almost 20 minutes.

DePaul got 29 points from Sonya Morris, who was 10 for 18 from the field, including 4 for 8 from 3. Leading scorer Chante Stonewall did score 16 points but was 7-for-25 shooting. She sat almost nine minutes after picking up her third foul early in the second quarter.

DePaul cut the halftime deficit to 59-47 with 4:06 left in the third on a three-point play but the Beavers responded with a 6-0 run to regain control.

Goodman gave the Beavers their largest lead to that point at 73-54 with a buzzer-beating 3 from half court.

“That one was just lucky,” she said.

“That’s every day,” Rueck jumped in to say. “She dribbles the last 11 seconds and it’s going up. She likes nothing more than shooting at the buzzer. She’s got something about her, it’s amazing what she does. I was telling her to kick it ahead and then I’m like oh yeah soot it. You knew it was good from the first second. That was incredible.”

The Beavers finished 34 for 61 from the field and 12 for 27 from deep as they nearly hit the century mark.

OSU women's basketball: No. 7 Beavers set to face No. 18 DePaul in semis

It may only be the second week of the season, but it should have the feel of March inside Gill Coliseum on Thursday night.

The first time Taylor Jones played a game inside Gill Coliseum, she finished with 27 points and grabbed 12 rebounds in an exhibition win over …

Ten years ago, the Oregon State women’s basketball program was on the verge of going dark and had to try to fill out a roster any way possible…

Last week, Kat Tudor set a goal to get back on the basketball court and play in her first game since tearing her left ACL against Washington S…

Despite a double-digit win over University of the Pacific on Monday, the message was clear heading into a showdown with No. 18 DePaul on Thurs…

OSU women's basketball: Beavers get a taste of what winning a title feels like with win over Missouri State

Oregon State hopes to be the team cutting down the nets in New Orleans on the final day of the women’s college basketball season in April.

Taylor Jones had 24 points to lead Oregon State in the 98-77 win against No. 18 DePaul in the preseason WNIT semifinal at Gill Coliseum on Thursday.

Oregon State's Aleah Goodman hit a half-court 3-pointer at the end of the third quarter and finished with 16 points.