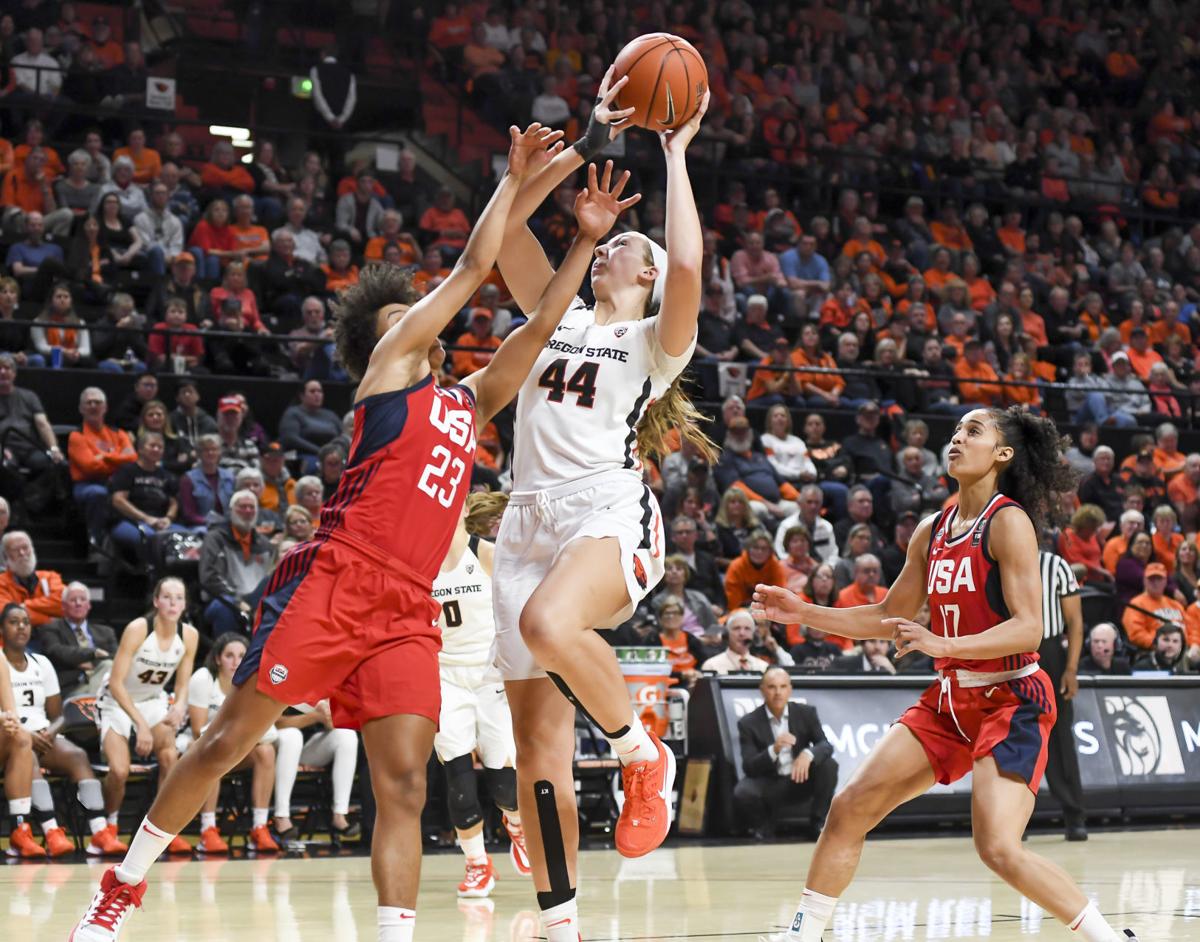 Oregon State freshman Taylor Jones, center, gets fouled by Layshia Clarendon of the USA Women's National Team last Monday. Jones had six points and nine rebounds and is expected to fill a key role for the Beavers this season. 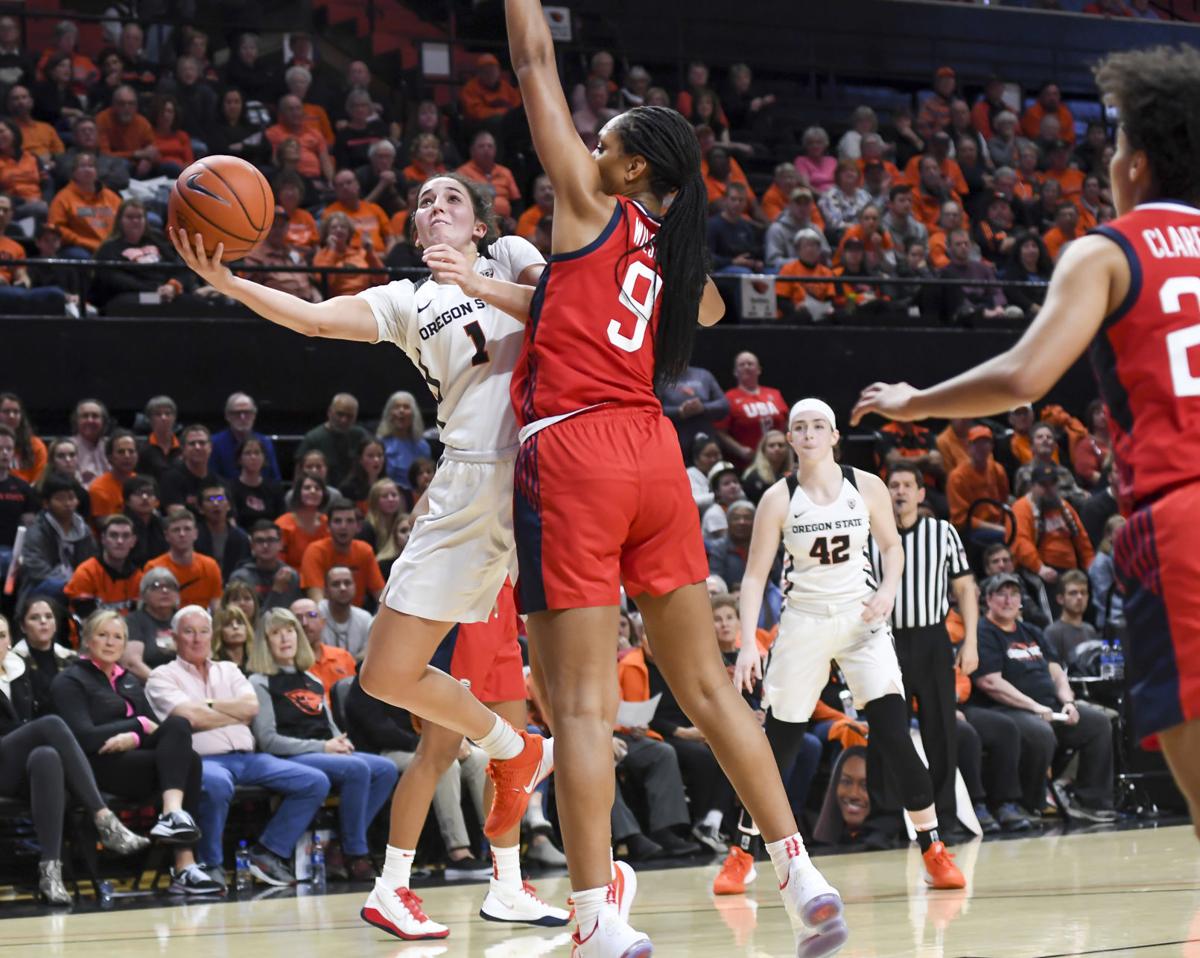 Oregon State junior guard Aleah Goodman tries to get past A'ja Wilson in an exhibition against Team USA. Goodman had 14 points and five rebounds and hit three 3-pointers. 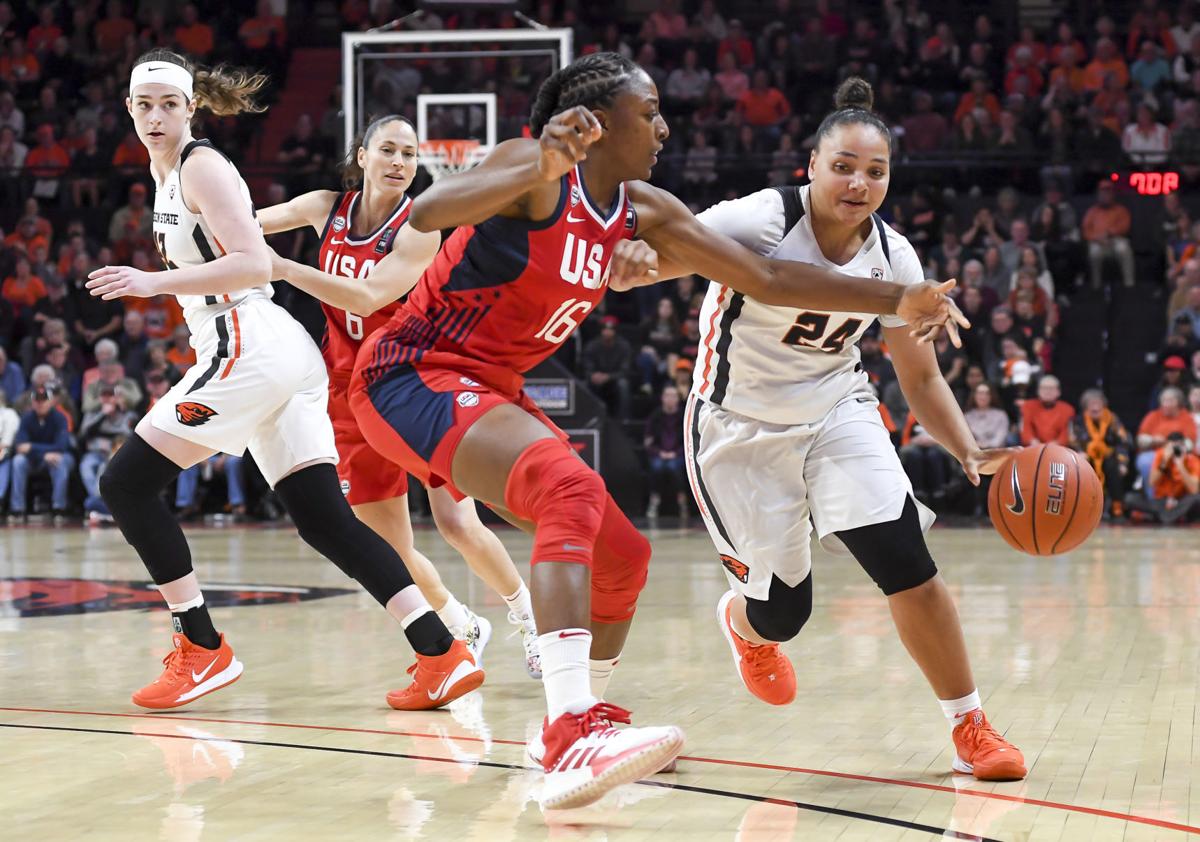 Oregon State junior Destiny Slocum tries to get around the defense of Team USA's Nneke Ogwumike. Slocum had 15 points.

Toward the end of the USA Women’s National Team’s shootaround Monday morning inside Gill Coliseum, members of the Oregon State women’s basketball team gathered in the stands to watch.

It was their first up-close look at some of their idols and the players they would face later that evening.

As Team USA broke its huddle, Oregon State’s players and coaches were invited to join them on the floor.

After exchanging hugs and introductions, both teams circled up and the Beavers players and coaches had a chance to ask questions of Team USA.

During those 10 or so minutes, some of the things they learned about were how great a teammate former OSU star Sydney Wiese continues to be as a member of the Los Angeles Sparks; how nutrition and working out are key to longevity; how to make sure you have a community around you; and how to overcome injuries, among others.

While all of those added value, the biggest lesson the Beavers learned on Monday came a few hours later on the basketball court.

Team USA used a 12-1 run to close the third quarter to turn a six-point lead into 17 going to the final 10 minutes. Oregon State never recovered in an 81-58 exhibition loss.

While the Beavers were on the short end on the scoreboard, the day and night were nothing but a win, filled with many valuable lessons the team can take as they prepare to set themselves up for a deep run in the NCAA tournament.

The No. 7 Beavers, who have made the NCAA tournament the past six seasons and advanced to the Sweet 16 four straight seasons, open the regular season at home against UC Irvine at 6 p.m. Saturday in the first round of the preseason WNIT. UC Irvine opened the season with a 79-77 win over San Jose State.

Monday’s experience should go a long way to helping the Beavers keep those streaks alive this March.

One of the takeaways is the players saw firsthand they can compete with anybody.

“You hang with the U.S. National Team and you’re going to compete with anyone,” junior guard Aleah Goodman said.

The next words from Goodman showed not only her maturity but that of the team as well. Even in a solid performance against some of the best players in the world, they have plenty of room for improvement.

“But I think it also showed us that we can’t make mistakes, we can’t make defensive errors because good teams are going to capitalize on all that,” Goodman continued. “So you can’t make mental errors. Those small mistakes, if you are playing against a good team that’s the difference between a win and a loss.”

That was the case in the third quarter as Team USA bolted out to a big lead and never allowed the Beavers to get back in the contest.

It was that stretch that stuck with redshirt junior guard Destiny Slocum.

“I think the first two quarters we held our own,” said Slocum, who had a team-high 15 points. “We came out with a great mindset and focus from the tip.

Dan Hughes, the Seattle Storm coach who is serving as the co-coach for Team USA on the college tour, said Oregon State “made us have to raise our game.”

Hughes was impressed with the Beavers, even without potential starters Taya Corosdale (hamstring) and Kat Tudor (knee) sidelined.

Add those two and the sky’s the limit, according to Hughes.

“That’s only going to make them better," he said.

While you would expect veterans like Slocum, Goodman and Mikayla Pivec to rise to the moment, freshmen Kennedy Brown and Taylor Jones also showed they weren’t intimidated by facing Team USA.

Brown had seven points and Jones added six to go with nine rebounds.

“More of the same from what we’ve seen all year,” said coach Scott Rueck, entering his 10th season at OSU. “Kennedy and Taylor, these are blue chip recruits, highly ranked and they’ve won their entire life. Their expectation is to win.”

Both freshmen, expected to play key roles this season, were not caught up in the moment on Monday.

“So that’s a great sign of things to come.”

Sylvia Fowles, who has won three Olympic gold medals and a two-time WNBA Finals MVP, was impressed with their play as well.

“I think they came out and they played hard and showed that they have a lot of grit about them,” she said. “They wasn’t scared to post up or attempt to block shots. That’s always a good sign for post players to just be aggressive.”

Still, at times, that youth showed up negatively on Monday as Team USA was able to score 44 points in the paint.

“Without Taya that limited some of the things we could have done just because we didn’t have the experience,” Rueck said. “So there were a couple stretches there where I may as well have been talking another language because the environment was too big for somebody in their first experience out there.”

But now the Beavers have that experience and that should, hopefully, for their success anyway, pay dividends when they find themselves in similar situations this coming season.

Ten years ago, the Oregon State women’s basketball program was on the verge of going dark and had to try to fill out a roster any way possible…

Destiny Slocum once had the opportunity to talk with Diana Taurasi and admits she was in awe.

While Oregon State had little trouble in 95-41 women's basketball exhibition win over Union University on Sunday, the biggest area of improvem…

Kat Tudor saw a call coming through around 8:30 last Thursday morning and just couldn’t answer it. She had a feeling there would be bad news o…

A season that has the potential to end as one of the best in program history, started off with a first on Wednesday when the Oregon State wome…

Taylor Jones expected to have some first-game jitters Sunday afternoon, but they never materialized as much as she thought they might.

Midway through the second quarter of No. 7 Oregon State’s showdown with No. 18 DePaul Thursday night, the officials gathered around the monito…

Last week, Kat Tudor set a goal to get back on the basketball court and play in her first game since tearing her left ACL against Washington S…

Oregon State freshman Taylor Jones, center, gets fouled by Layshia Clarendon of the USA Women's National Team last Monday. Jones had six points and nine rebounds and is expected to fill a key role for the Beavers this season.

Oregon State junior guard Aleah Goodman tries to get past A'ja Wilson in an exhibition against Team USA. Goodman had 14 points and five rebounds and hit three 3-pointers.

Oregon State junior Destiny Slocum tries to get around the defense of Team USA's Nneke Ogwumike. Slocum had 15 points.