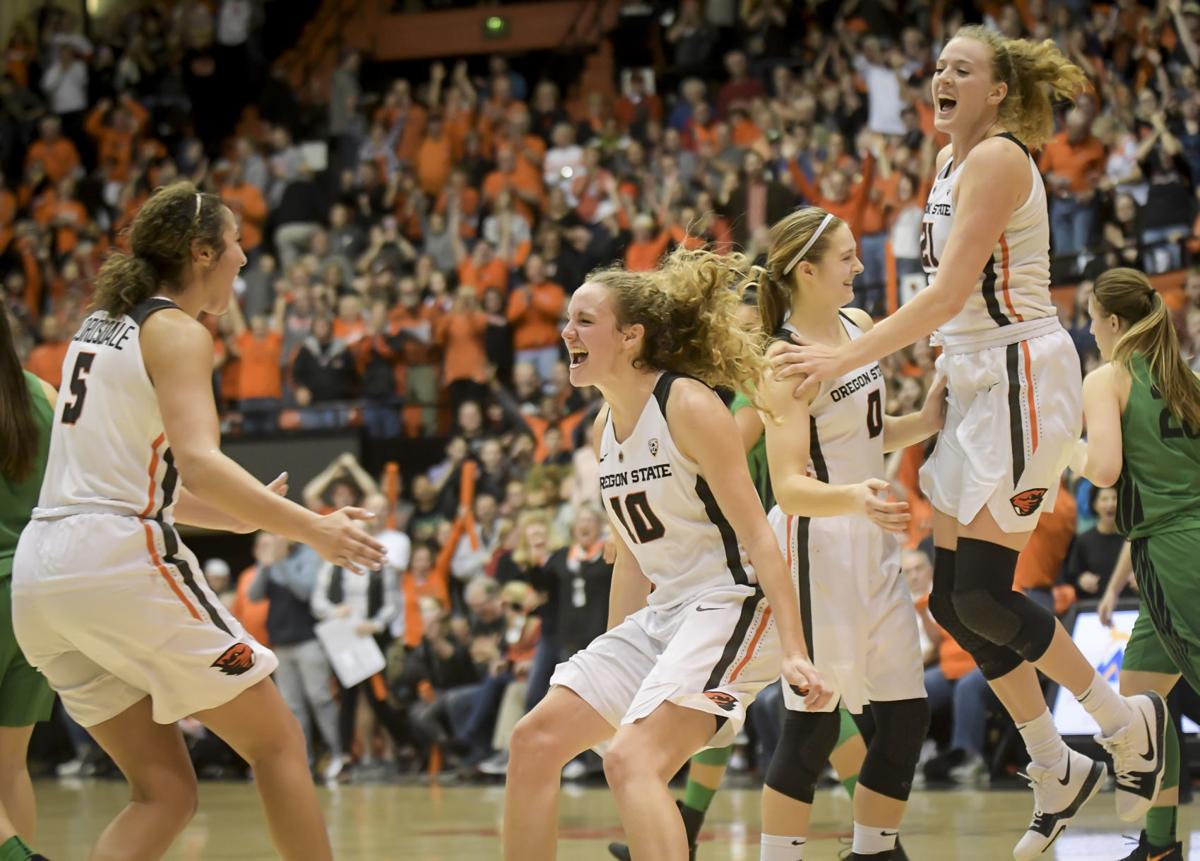 Oregon State players celebrate after defeating Oregon 85-79 in an overtime game at Gill Coliseum in 2018. It was the Beavers' 14th straight Civil War win. Both Gill Coliseum (Sunday) and Matthew Knight Arena (Friday) have been sold out for this seasons's two regular season games between the rivals. 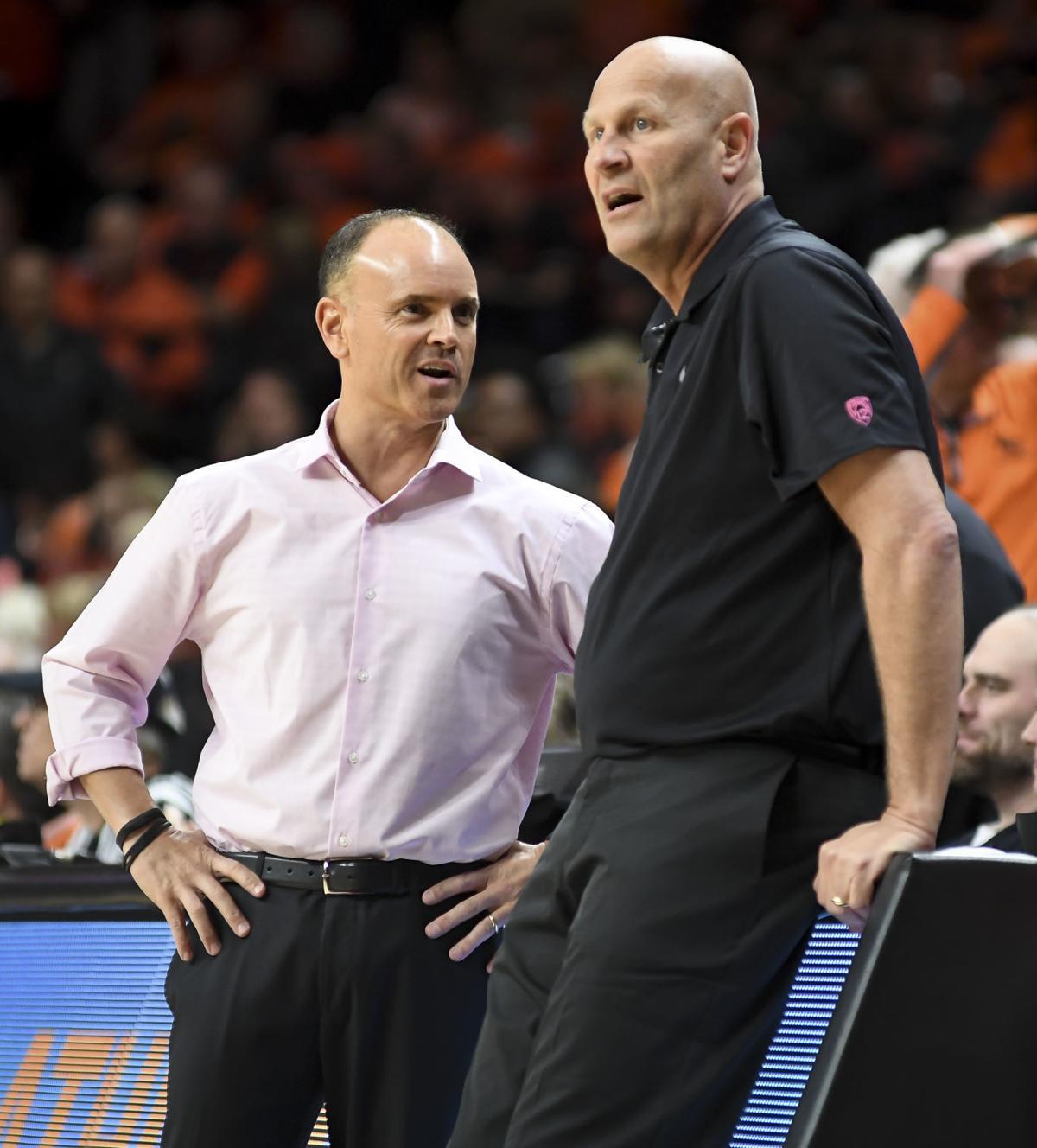 Oregon State coach Scott Rueck and Oregon coach Kelly Graves have built their respective programs into two of the best in the country,

It also happened to the mark the grand opening of Matthew Knight Arena in Eugene, and a sellout crowd of 12,364 was on hand.

For Rueck, who had pieced together a team that season and had never coached in front of more than 2,000 or so people during his tenure at Division III George Fox, it was, in a word, “overwhelming.”

And while the Beavers suffered an 81-72 setback, the eighth straight loss to start the then Pac-10 slate, Rueck remembers it as “being just an absolute blast,” he said Tuesday afternoon.

“We played so hard,” he recalled. “We weren't quite good enough to win that one but we played so hard and it was just so much fun. But I just remember being overwhelmed, honestly.”

The Beavers and Ducks will renew their rivalry this Friday night at 7 p.m. in Matthew Knight Arena. While the game is once again sold out, that’s about the only similarity from that game in 2011.

Neither the Beavers nor the Ducks were challengers in the conference that season let alone being in a position to win the conference and make the NCAA tournament — and go deep in the tourney to boot.

But when they square off Friday and then in Gill Coliseum Sunday at 1 p.m., it will be a matchup of the No. 4 (Oregon) and No. 7 (Beavers) teams in the country. Sunday’s game is being televised on ESPN2.

Both games are sold out and tickets on the secondary market are going from a few hundred dollars to more than $1,000.

“Both programs have worked hard for a long time to get to this point where we're both top 10,” Rueck said. “We both have high expectations for our years. We're both off to good starts, I mean we both would rather be a little bit better than we are right now even though we're both in pretty good positions.

“So there's a lot of attention, and that's fun, it's kind of what you dream of, to be in situations like this and to get to compete at the highest level and put a show on for a lot of people. And so it's all fun.”

Oregon State may have lost that first Civil War, but it was not a precursor of things to come for Rueck and the Beavers.

A few weeks later, the Beavers overcame a 20-point halftime deficit at home to rally for a 61-59 win.

Rueck said the Beavers had had been improving each week heading into the game, then were shell-shocked at the half.

“We only lost by (nine) down in Eugene, (so) maybe, you know, we can get them here,” Rueck thought at the time. “Then just to get kind of ambushed the first half, it just went the complete opposite of what we hoped. They shot the lights out and so we're in the locker room down 20 and what are you going to do this half? And we just came out and chipped away, and I just remember El Sara Greer, our one senior, just demanding the ball down the stretch in the post and scoring three-point plays and then Anna Marchbanks getting that rebound and the place going absolutely crazy.”

That victory was a turning point not only in the rivalry — the Beavers went on to win 14 in a row in the series — but also the belief inside the program.

The Ducks (15-2, 5-1) have also turned things around under coach Kelly Graves. Oregon has made three straight NCAA tournaments, won two Pac-12 titles, one conference tournament title and been to the Elite Eight three times with a trip to the Final Four last season.

“Nobody could have seen this coming, that long ago, no way,” Rueck said of both programs’ success. “Too many unknowns back then for me and for us to know what we could become here, it hadn't been done at that level. For them, they weren't at that level yet.

“And so just the build of it, the attention on both programs, the national success we've both had, that our conferences has had, has gotten us a lot of attention to the point where there's household names now — both teams have people that go by one name on the roster — and so many people care which is just crazy, really, to be a part of and just awesome.”

Both programs have pushed each other to reach this level.

“I think we've made each other both better over the years through our competition with each other, through recruiting battles, through the games on the court," Rueck said.

"Certainly every school has a rival and it's fun to compete against your rival. But I mean we've all been trying to catch up to Stanford forever. That was the initial goal and then this conference just pushes you. Shoot, you relax you're going to get beat, and so competition is healthy if you handle it correctly and I think we both have.”

Pac-12 women's basketball: Stanford shakes off slow start to get split in Oregon

Coming off a 32-point loss to Oregon on Thursday night, there were some questions as to how a young Stanford women's basketball team would res…

EUGENE — Friday night’s much anticipated women’s basketball Civil War at Matthew Knight Arena appeared to be a headed for an Oregon rout, espe…

EUGENE — There were no smiles and no moral victories for the No. 7 Oregon State women’s basketball team Friday night.

Oregon women's basketball: Ducks look to win at Gill for first time since 2010

EUGENE — Almost as soon as the final buzzer sounded on Friday, Sabrina Ionescu had her sights set on Sunday.

No. 4 Oregon isn’t known for its defense.

Oregon State players celebrate after defeating Oregon 85-79 in an overtime game at Gill Coliseum in 2018. It was the Beavers' 14th straight Civil War win. Both Gill Coliseum (Sunday) and Matthew Knight Arena (Friday) have been sold out for this seasons's two regular season games between the rivals.

Oregon State coach Scott Rueck and Oregon coach Kelly Graves have built their respective programs into two of the best in the country,