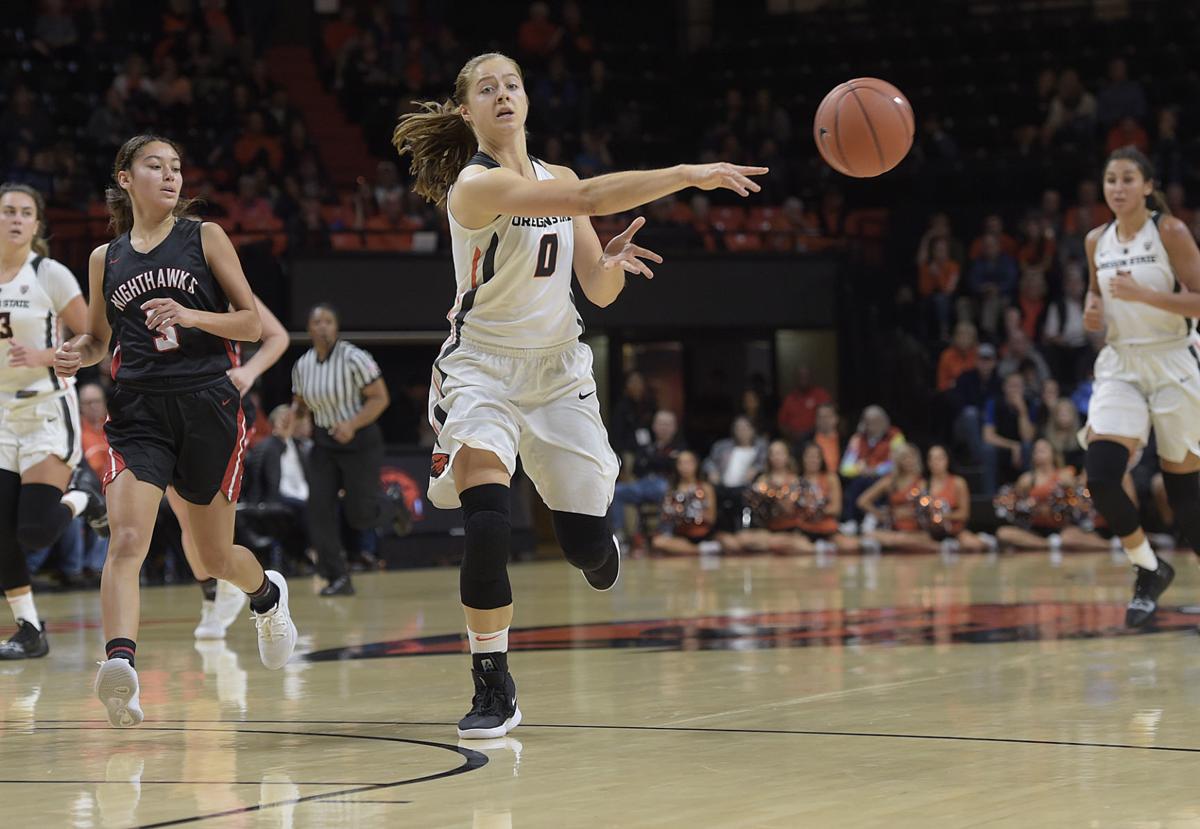 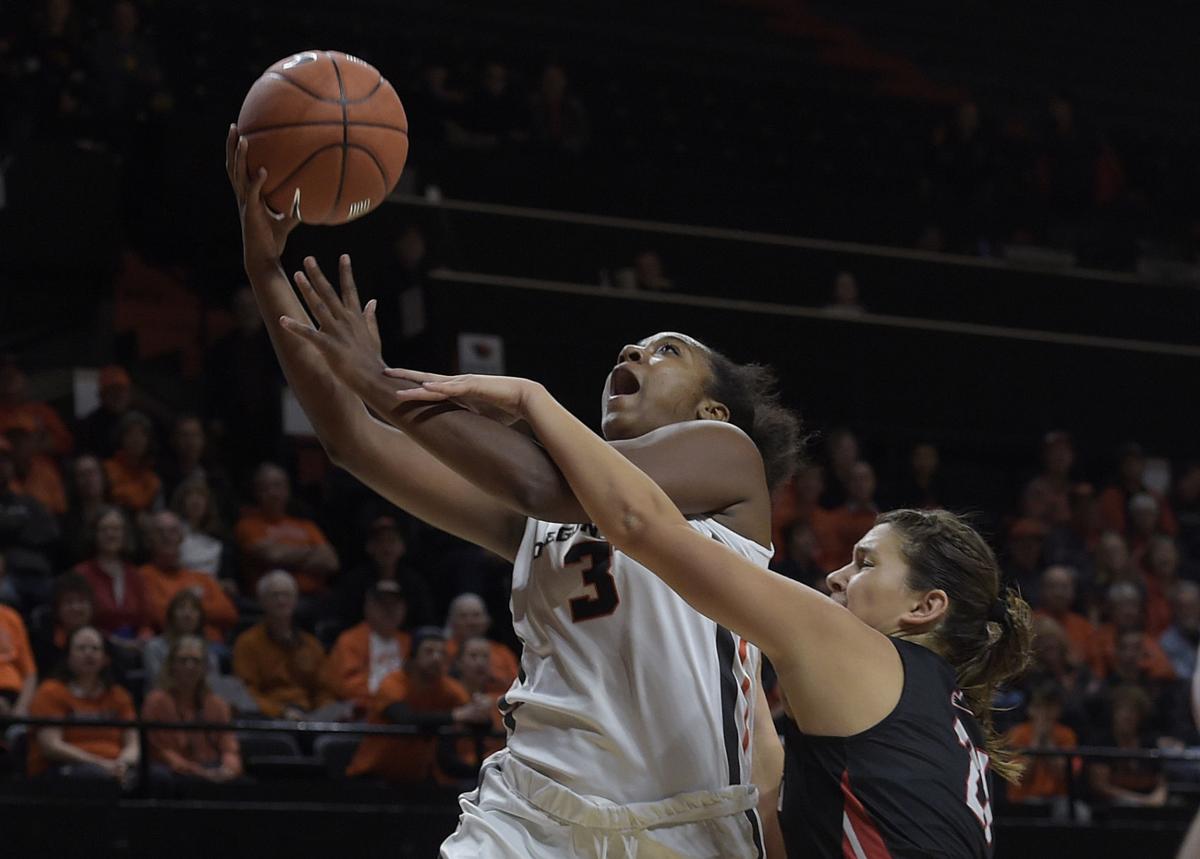 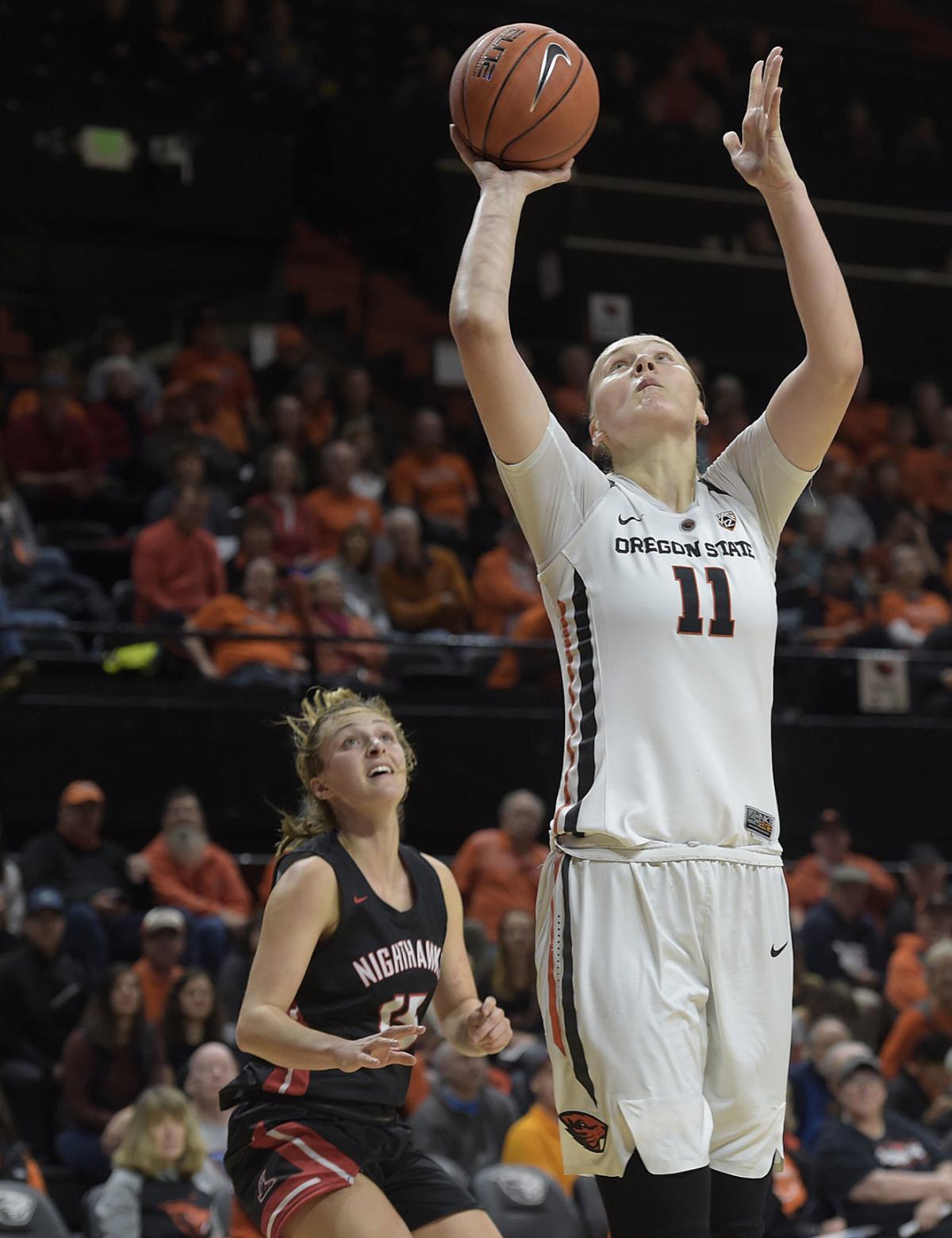 Oregon State center Joanna Grymek, right, will have some big shoes to try to fill this season.

Scott Rueck has a bit of a problem, only it's one he’s more than happy to deal with this season.

Rueck, entering his ninth season as Oregon State’s women’s basketball coach, has the most versatile team in his time in Corvallis and will need to figure out the best combination of players to use, and when, this season.

That process will be on display this Friday night when the Beavers open the regular season at 7 against Cal Poly.

The Beavers return four starters off last year’s team that reached the Elite Eight for the second time in three seasons, and also add point guard Destiny Slocum, a transfer from Maryland who sat out the 2017-18 season due to NCAA rules.

With a plethora of talented players, it could make for some difficult decisions as to who starts, who plays when and how the rotation comes together.

Rueck, however isn’t too concerned.

“Those are great problems to have, and this team does have a lot of people with a lot of experience and a lot of skill,” he said. “Because of that, it doesn’t change, though, the natural progression that teams go through. What team plays the best together, what people play in what offense, what defensive look can we give with certain people.

“So it’s a true puzzle to put together. That’s true every year and this one has a lot of really good pieces to it. It’s just going to be a progression as we go. What group works best together and at what time. And that will shake out.”

That has been a fun process for the players as well. Sophomore point guard Aleah Goodman, who averaged 6.3 points a game last season, said having to learn different positions has helped her as a point guard to understand that job better.

“Being able to play those other positions has actually helped me because I can see 'oh when I’m the two this is what I need, so this is what they’re going to need when they’re the two or the three,'” she said. "Everyone can play with everyone, which I love. Our bench is so deep. We don’t skip a beat when we sub, which I think is an amazing.”

Slocum said the players each have faith in their teammates regardless of who is on the court or what position they are playing at the time.

The Beavers' biggest loss from last season is center Marie Gulich, who led the team with 17.5 points and 9.1 rebounds per game. They also lost guard Taylor Kalmer, who transferred to San Diego State for her senior season.

“She’s a huge, huge part of last year’s season so I think everyone’s stepping into those roles and just everyone just kind of coming together and knowing what we need to do,” Goodman said of Gulich, a first-round draft pick by the WNBA's Phoenix Mercury.

With Slocum, the Beavers have a dynamic point guard, and she certainly showed the home fans a glimpse of what is to come in last Saturday’s 95-58 exhibition victory over Northwest Nazarene.

Senior Joanna Grymek, who played about nine minutes a game and averaged 3.8 points last season, could take over at center.

Even though the Beavers are looking for someone or a combination of players to make up for the loss of Gulich, as well as having a new starter at point guard — albeit one who has played at a high level at another school — expectations are high not only inside the program but on a national level.

Oregon State is No. 8 in The Associated Press poll and No. 9 in the coaches poll. The Beavers also came in at No. 7 in ESPN’s poll.

While they certainly have talent, introducing a new point guard and center is never easy.

Senior Katie McWilliams could be a big-time scorer this year and she showed that ability in the exhibition game with 17 points on 7-for-12 shooting.

“I thought last year we saw glimpses of it when the light bulb went on for her and she began to understand a) what she’s capable of and b) what the team needs,” Rueck said. “When you look around on our roster now, well she’s the one four-year senior so certainly we need her to produce for us. I feel like that’s more clearly defined in her mind. She’s stepping into that roll.”

Pivec could once again be a stat stuffer as she had nine points, seven rebounds and five assists in the exhibition.

Tudor missed some time early in camp recovering from surgery but hit a couple 3s late in the exhibition and finished with eight points.

Sophomore Taya Corosdale, who started 25 games last season and averaged 6.8 points and 4.2 rebounds, is healthy after having shoulder surgery in May.

Maddie Washington and Janessa Thropay, both juniors, are back and could have expanded roles this season. Washington had eight points in the exhibition while Thropay hauled in eight rebounds.

Freshman Patricia Morris (6-foot-7) could see playing time at the center spot as the season progresses and guard Jasmine Simmons saw nine minutes of time in the exhibition.

The other freshman, Andrea Aquino (6-9), did not play in the exhibition game. Rueck said Wednesday she is "out" and there is no time table for her return.

With the speed and ball handlers the Beavers have, there’s a good chance they will push the tempo whenever possible. But don’t expect a drastic change in approach.

“I think it’s always our option to get the ball up the floor as fast as possible,” Slocum said. “If we don’t have that, that’s what is so awesome is Scott is so smart that we can execute in the half court just as well as in transition. So I think both are a great option for us.”

Goodman said the sky is the limit for this team and has seen plenty of growth even the last week leading up to Friday’s season opener.

“I think it’s just really important for us to continue to learn,” she said. “Learn, take everything in, film, everything the coaches say, take it in like a sponge and be relentless with that. … When we do that, we’re going to be pretty hard to beat.”

The No. 8-ranked Oregon State women’s basketball team hasn’t had much of a test in its first two regular season games, or its exhibition contest.

Midway through the third quarter, Destiny Slocum started the break and delivered a pass to Mikayla Pivec in stride at the 3-point line.

OSU women's basketball: Corosdale, Tudor back on the court

OSU women's basketball: Beavers continue to build off past success

Oregon State’s rise from rags to riches in women’s college basketball has been well documented over the past few seasons.

Sitting in the film room last week, Destiny Slocum was soaking in everything that coach Scott Rueck was talking about as the Oregon State wome…

Oregon State center Joanna Grymek, right, will have some big shoes to try to fill this season.