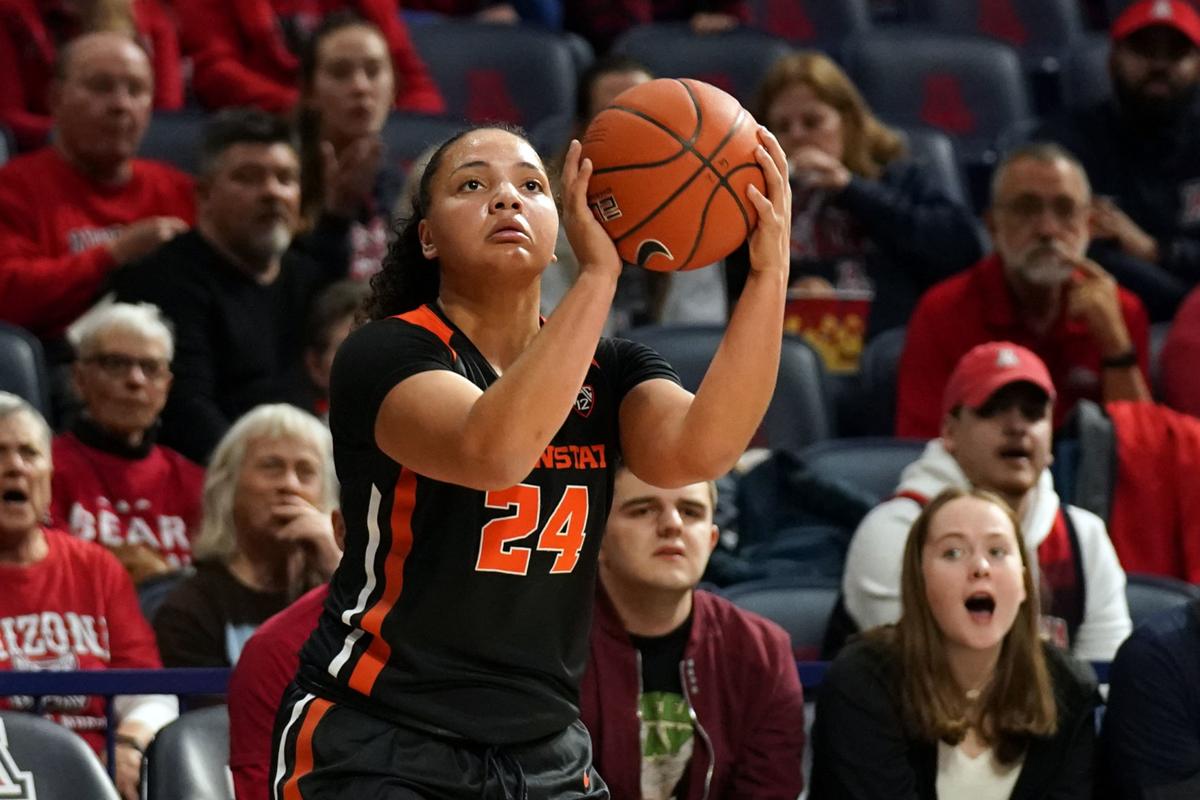 Oregon State guard Destiny Slocum gets an open look against Arizona. The Beavers as a team have seen their shooting percentage from the field and points per game dip in Pac-12 play. 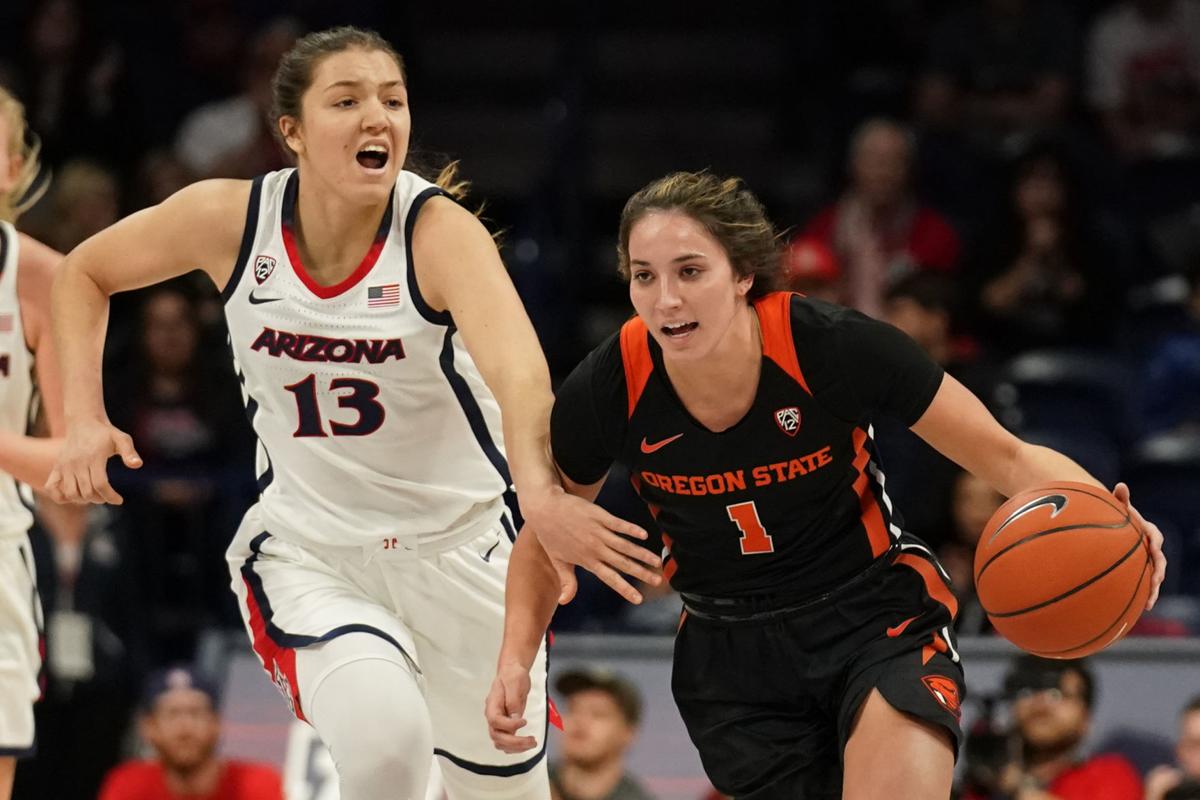 Oregon State guard Aleah Goodman, right, said the Beavers need to continue to work on their spacing to help their offense get back on track.

To put it simply, that’s basketball.

That typically hasn’t been the case, though, for the Oregon State women’s basketball program over the past five or so seasons.

So when the Beavers suffered through a 2-for-14 shooting performance in the first quarter and followed that up with a 4-for-18 second quarter against Arizona State last Sunday, it was a bit of a head-scratcher.

It harkened back to memories of Louisville in last year’s Sweet 16 game in Albany, New York, as well as the Pac-12 tournament quarterfinals against Washington.

The No. 8 Beavers struggled shooting in both and lost those games, as they did on Sunday, their first loss of the season.

Oregon State regrouped some in the second half and finished the game 19 for 61 but scored just 47 points — a season-low by 16 points.

Coach Scott Rueck credits Arizona State to some degree for being able to speed the Beavers up and to play physical while beating his team to the best spots.

“We just didn't get comfortable, could not get comfortable in the first half, especially missed some shots that typically we make,” he said. “And then second half I loved our fight. And it was interesting (that) at times offense came very simple and then at times it seemed like we couldn’t get anything, couldn't get any room.”

Junior guard Aleah Goodman said the Beavers need to get back to better spacing.

“We can't lack spacing at all,” she said. “But it just shows that we have to be on our game every game. I'm proud of our defense. I think our defense was huge in both games this weekend but we just need to get the offense flowing and we can't have any missed opportunities or miss possessions.”

While it may not be all that alarming just yet, the Beavers — who play host to California on Friday before a stretch of facing No. 3 Stanford and No. 7 Oregon (twice) in the span of eight days — have seen their offensive production take a bit of a dive in Pac-12 play.

OSU is coming off its two lowest-scoring games of the season — 63 points at Arizona and aforementioned season-low 47 against the Sun Devils.

Senior Mikayla Pivec said you can chalk some of that up to the familiarity of the coaches in the conference.

“They know what each other wants to do and they know a lot of the sets that we've been running for years, so they can try anticipate what you're going to run,” she said. “So you have to execute even more crisply and be able to make different reads in your offense and not just the main one.”

The Beavers have also seen their shooting percentage fall in conference play.

Through 12 nonconference games, OSU was shooting 49.9 percent from the field and 37.5 percent from beyond the 3-point line.

The Beavers are shooting just 40.3 percent from the field in conference play and only 29.6 from deep.

“We don't have many games like that where we're no one is shooting the ball good,” Goodman said. “But we know that when 3s aren’t falling we have to be able to do something else, we have to be able to get to the rim, which we saw in bits in the second half but we just need to start that earlier.”

While the missed 3s stick out like a sore thumb, the Beavers also missed a number of open looks in close that they typically convert and that put them behind the 8-ball early and they couldn’t fully recover to pull out a win.

“To be honest we missed as many layups as we did 3s, it felt like, or shots around there,” Rueck said. “It was just one of those days.”

The fact the Beavers had some open looks does offer some solace.

“You know when we get good looks that we've run our sets to the best of our ability.” Pivec said. “When they don't fall, it’s unfortunate. But there’s also times it’s not just us missing shots it’s us not executing and executing poorly.”

Oregon State guard Destiny Slocum gets an open look against Arizona. The Beavers as a team have seen their shooting percentage from the field and points per game dip in Pac-12 play.

Oregon State guard Aleah Goodman, right, said the Beavers need to continue to work on their spacing to help their offense get back on track.