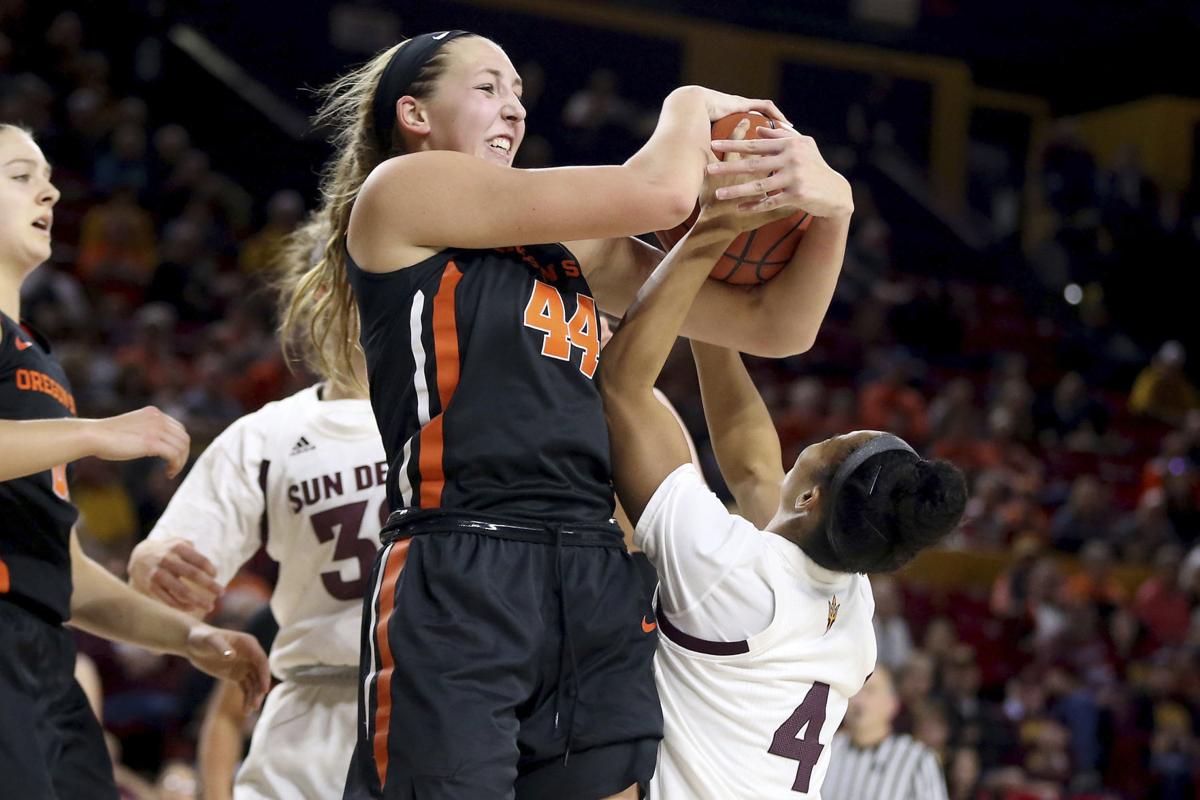 Oregon State's Taylor Jones (44) wins a rebound over Arizona State's Kiara Russell in Sunday's loss to the Sun Devils. The game was likely the most physical the Beavers have played this season. 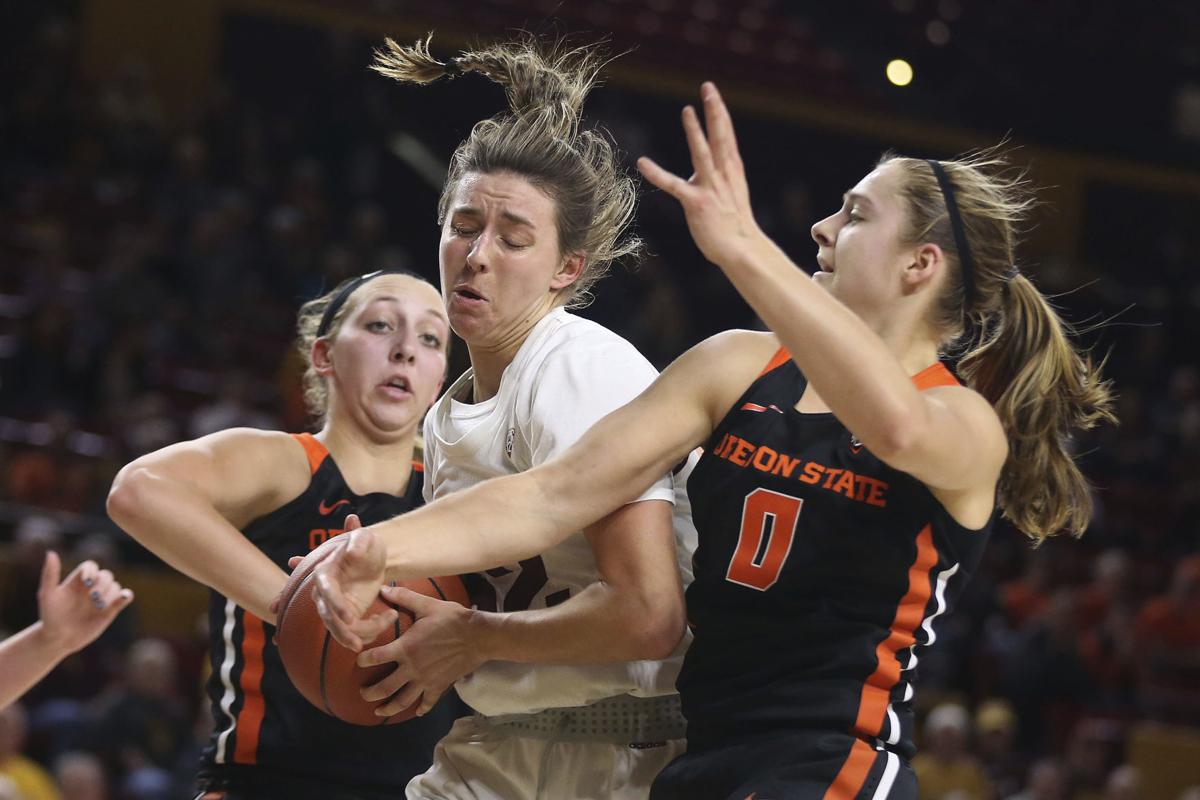 The Beavers had played just one true road game in the first 14 contests of the season — winning 75-53 at Miami back in late November — to go with three neutral site games.

And it was no slouch of a trip, either, going up against then-No. 18 Arizona in the opener — the Wildcats were coming off their first loss since the Pac-12 tournament last season. That included a run to the WNIT title.

Then was a trip to Arizona State against a Sun Devils program that has given the Beavers fits for years.

Oregon State came away with a split, edging Arizona 63-61 before falling to the Sun Devils, 55-47.

“There was a lot of growth. Obviously we went to Arizona, really tough environment, tough game. I think that's the first environment like that that we’ve played in this year,” junior guard Aleah Goodman said. “That was a great experience for us.

“Then obviously going to Arizona State, we didn't end with the outcome that we wanted, but I'm just proud of the team and how we came back and fought and really just showed some resilience with that game. But also showed that we have a lot of things to work on.”

There is plenty to learn from both games moving forward — the Beavers are home against California (8-7, 0-4) at 7 p.m. Friday and then face No. 3 Stanford (15-1, 4-0) at noon Sunday — but the most important lesson might be understanding the different level of physicality that comes in conference games.

It’s not something new to the returning players, especially the upperclassmen, like Goodman, who have been through plenty of road battles in conference play over the past few seasons.

“It showed us what the Pac 12 is and I think that's something that this team needed,” Goodman said. “It was a little bit of a gut check, and it's going to be important that we're remembering that game and knowing that's how every Pac 12 game is going to be.”

The officials called 15 fouls on both Oregon State and Arizona State and each team shot 11 free throws. The Sun Devils made nine and the Beavers seven.

Even with that number, there were a few instances where a whistle probably could have been blown but wasn’t.

“It’s a difficult game to officiate, I know, when you play them,” coach Scott Rueck said of facing the Sun Devils. “The first possession of the game Robbi Ryan is just running Mik (Mikayla Pivec) off her line. And it's like, well, here we go. You know it's going to be interesting to see how this game is called and then you've got to play within that.

“We're at (the officials’) mercy. However they're going to interpret the rules that night is what we have to play within. So it was very physical. And you’ve got to play through it.”

Pivec said both contests felt like football games at times with the physicality and it got a bit chippy at the end of the ASU game when her and Ryan got into it a bit heading up the court late. Both were whistled for fouls.

“I know it can’t be fun,” Rueck said of playing through so much contact. “I mean it's basketball. Freedom of movement is the point of emphasis and it didn't feel that way and so that's got to be a little bit frustrating because that game was (officiated) different (than others).”

Rueck continued to explain how some games touch fouls that are hard to see are called and in others players are moved off their line and no whistle comes.

It’s all about adjusting to each game.

“You have to adapt to it, you’ve got to play through it and there's going to be nights where, I guess, they choose to call it that way and that's just the way it is, that's reality,” he said.

Rueck was asked what he preferred — letting the players be physical or reigning in the physicality. He didn’t offer up a preference.

“I think any coach, we just want it to be the same every night, I mean that's all we could ask for,” he said. “We watch the rules video that says exactly what's going to be called and what isn't. They have video clips and you just expect that. That's what I expect. I think that would be the case anywhere.”

Dr. Ken Johnson left behind trail of love and generosity

On Nov. 15, 2019, at the first philanthropy awards presented by the Benton Community Foundation, Dr. Ken Johnson, a retired Corvallis dentist,…

Oregon State's Taylor Jones (44) wins a rebound over Arizona State's Kiara Russell in Sunday's loss to the Sun Devils. The game was likely the most physical the Beavers have played this season.