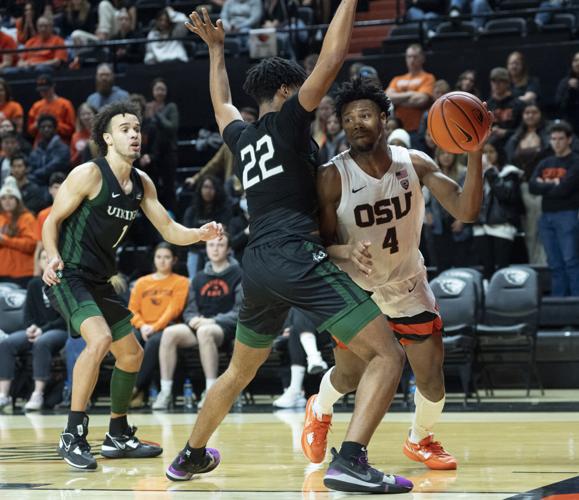 Oregon State's Dexter Akanno (4) looks for a teammate while under pressure from Portland State's Isaiah Johnson. The Beavers had 19 turnovers in the loss. 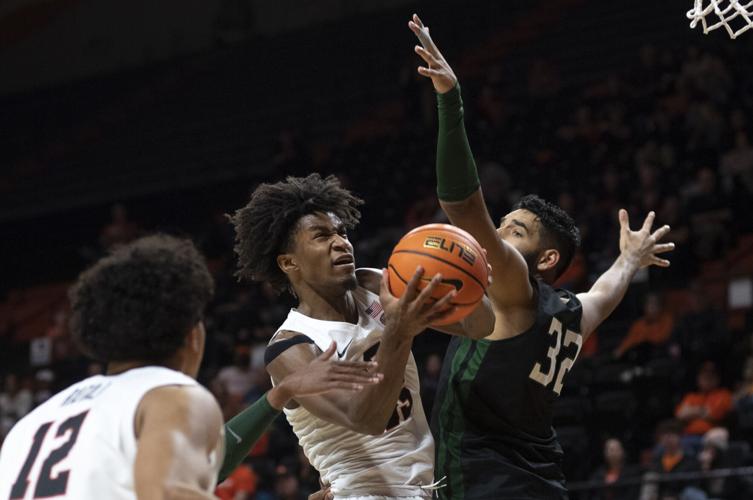 Oregon State's Glenn Taylor Jr. (35) had a career-high 25 points Saturday against Portland State. But the Vikings exposed several areas of needed improvement for the Beavers.

Three wins to open the season that weren’t perfect but still resulted in victories allowed Oregon State men’s basketball to learn lessons while feeling good about the progress being made.

Saturday night’s 79-66 home loss to Portland State provided plenty of areas to work on as the Beavers see a significant uptick in competition this week.

The biggest deficiency that stood out to Beavers coach Wayne Tinkle against the Vikings was turnovers. OSU had 12 turnovers in the first half on their way to 18 total, one short of the number they had in the opener against Tulsa.

“We knew that was going to be a key. They didn’t trap. It wasn’t great pressure,” Tinkle said. “The three things were toughness, discipline and togetherness, and we failed all three of those.”

“On the vets’ side, we knew what was going to happen. We knew what they were going to come here to do,” said sophomore forward Glenn Taylor Jr., who had a career-high 25 points but also five turnovers. “That’s our fault, not gathering up our team and keeping them poised.”

Tinkle said he believed his team frequently “settled” on offense, resulting in a season-low eight assists. The coach said that number showed some selfishness by his players. He also saw a lack of fundamentals in the way the Beavers attacked the basket. There were numerous turnovers related to ball handling in the key.

The coach was looking for ball and player movement offensively and for the Beavers to play off of two feet, and those were all areas the team struggled to maintain.

“When we’ve had our good moments we’re moving the ball. We don’t care who’s getting the limelight,” Tinkle said. “The good-look 3s from draw-kick, in-and-outs, we shoot higher percentages. But when we do that stuff one on one, we prove that we’re not a very good team.”

Tinkle said the lack of offensive movement resulted in frustration on defense and an inability to slow down Portland State regardless of the scheme being played. In addition, the Beavers had a difficult time defending without fouling.

“We saw that we weren’t getting it done in practice then low and behold it happened in the game,” the junior guard said. That’s on our vet leaders to round up our troops and get us going. It’s on us to respond.”

That response will have to come against a ranked team.

The Beavers play No. 7 Duke at noon Thursday at Veterans Memorial Coliseum in the Phil Knight Legacy, an eight-team bracketed tournament that will also include games at Moda Center and Chiles Center at University of Portland.

Oregon State will play Florida or Xavier on Friday and then No. 2 Gonzaga, Portland State, Purdue or West Virginia in its tournament finale Sunday.

One bright spot versus Portland State was the offensive production and efficiency from Taylor, who has now reset his career-best scoring total in consecutive games.

An all-Pac-12 freshman team selection last season shot 6 of 8 overall and was 13 of 15 at the free-throw line. He also had two rebounds and two assists.

Taylor had 10 straight Oregon State points — converting two conventional three-point plays in the process — that helped the Beavers dig out of an 11-point deficit midway through the first half.

“I thought he was fairly patient. He was cutting and moving. His teammates found him,” Tinkle said. “He was attacking downhill. Obviously got out in transition, I thought got him going a little bit. Then he converted pretty well at the free-throwing. Getting fouled, drawing contact.”

Freshman point guard Jordan Pope had 14 points with two 3-pointers on 5-of-8 shooting, putting him in double-figure scoring in all four games this season. He added two assists and two steals.

Outside of Taylor and Pope, the rest of the team shot 9 of 27.

OSU men's basketball: Ryuny finding his fit with the Beavers after transfer

Coming to Oregon State was a fresh start for Dzmitry Ryuny.

Glenn Taylor Jr. had a career-high 19 points Tuesday night as Oregon State pulled away from Bushnell in the second half for an 83-66 men’s bas…

Defense is a work in progress early in the season for the Oregon State men’s basketball team.

OSU men's basketball: Akanno, Beavers find some offense in second half to pull away for win

Dexter Akanno scored all of his game-high 15 points after halftime Friday night, leading Oregon State to a 60-43 win against Florida A&M i…

Oregon State had four games to prepare for a monumental upward leap in competition.

OSU men's basketball: Early hole too much in tournament loss to Florida

PORTLAND — A short stretch early in Friday’s second half showed the struggles and shortcomings Oregon State dealt with all game long against Florida.

Oregon State's Dexter Akanno (4) looks for a teammate while under pressure from Portland State's Isaiah Johnson. The Beavers had 19 turnovers in the loss.

Oregon State's Glenn Taylor Jr. (35) had a career-high 25 points Saturday against Portland State. But the Vikings exposed several areas of needed improvement for the Beavers.