Become a Member
Read Today's E-edition
Share This
OSU men's basketball: Postseason success in the rearview, work for the future continues
0 Comments
Share this
1 of 2 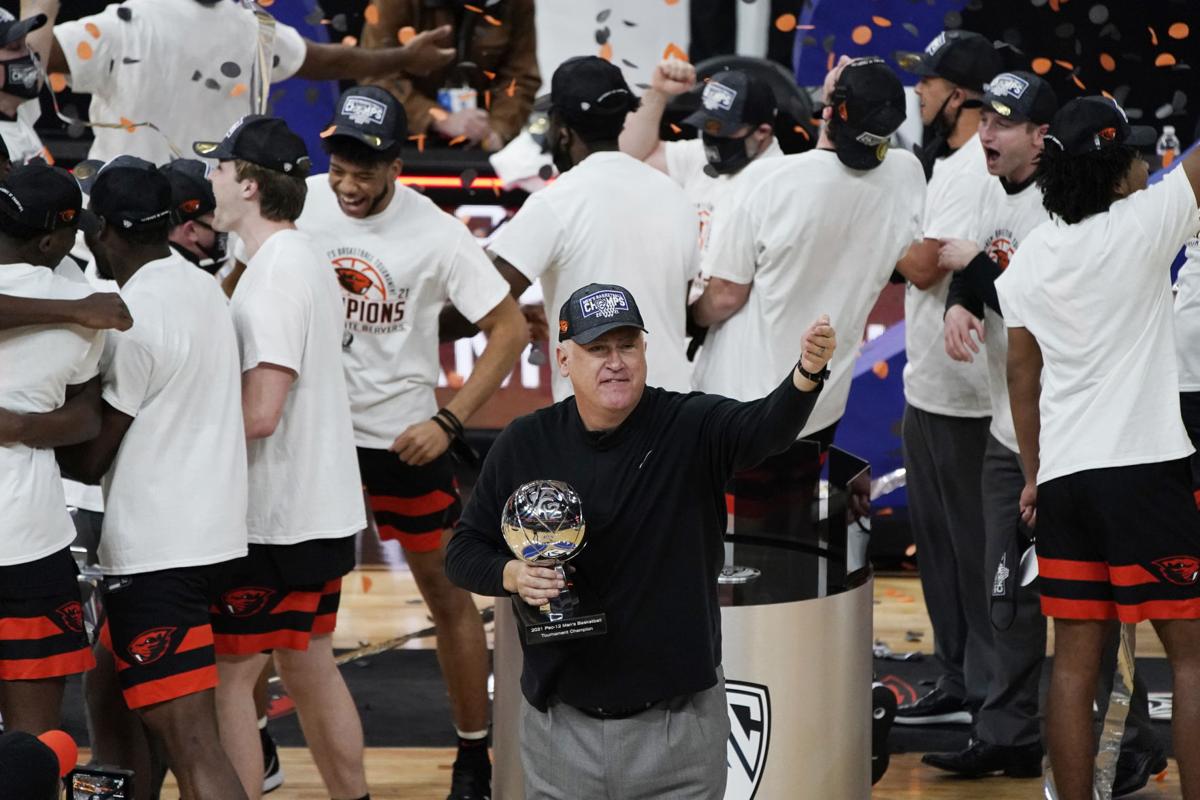 Oregon State head coach Wayne Tinkle holds up the trophy after his team defeated Colorado for the Pac-12 tournament championship. Five-plus weeks later, Tinkle and his staff are working to fill out next year's roster and looking at players for future recruiting classes as well. 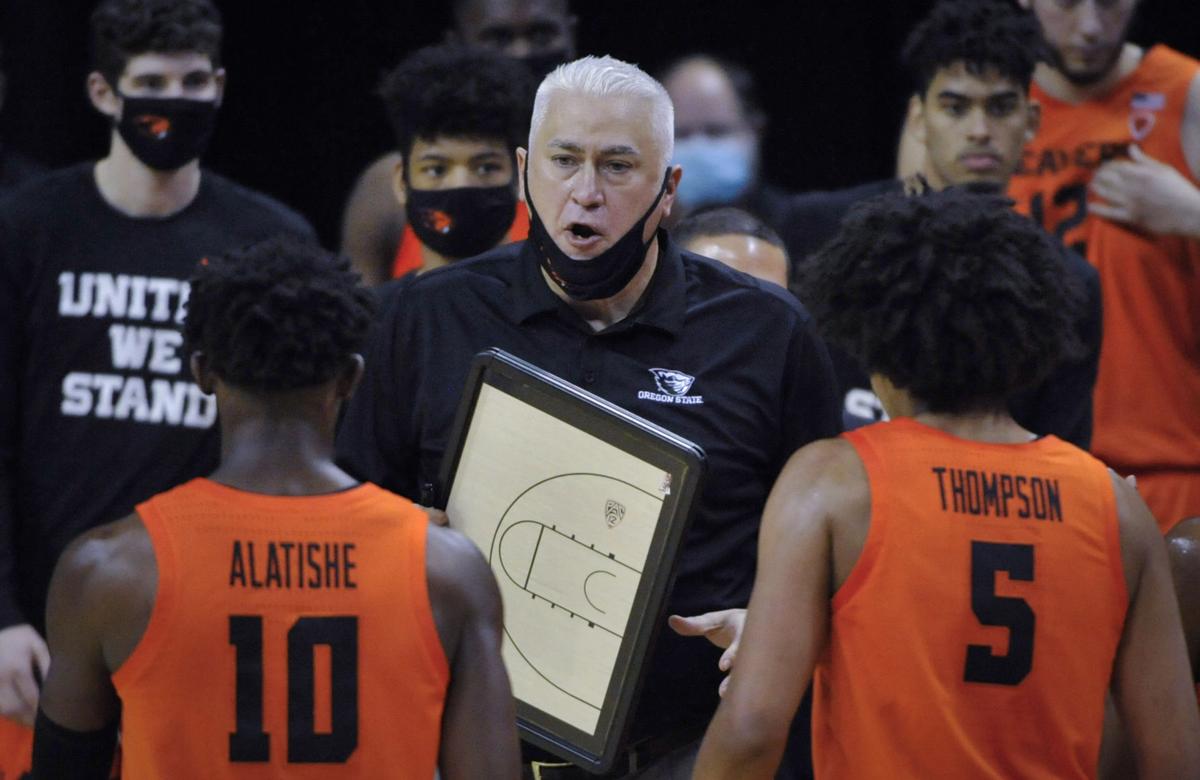 Wayne Tinkle and his staff hope to find impact players in the transfer portal as they did last offseason with Warith Alatishe (10), who joined Oregon State after two years at Nicholls State.

Wayne Tinkle returned to his office in the Oregon State Basketball Center after his team’s unexpected and record-breaking run to the NCAA men’s basketball Elite Eight to find a pile of letters of support.

The Beavers got to 20 wins for just the second time in the last three decades and accomplished a fifth winning season in seven years under Tinkle, in addition to postseason success not seen in the program in nearly 40 years.

The coach is a competitor, still sour over the season-ending loss to Houston. It hasn’t yet, though Tinkle says the March his team had will eventually sink in with him.

“I think once we get through the recruiting and sign our last few guys we’ll be able to sit back and get a good idea of what we did,” he said. “But I know I’m proud of all the guys did to come together and make that happen.”

There are still players to be evaluated and signed for next year’s team while looking ahead to the classes beyond.

The NCAA’s transfer portal, which first opened in October 2018, has resulted in hundreds of players looking for new homes and expanded opportunities.

Redshirt freshman guard Julien Franklin, junior guard Tariq Silver and sophomore forward Dearon Tucker all announced after the season that they were entering the transfer portal. Franklin, after two years with Oregon State, has signed with Cal Poly.

The three combined for 8.8% of the Beavers’ floor time, averaging 5.1 points and 23.3 minutes while appearing in 73 combined games.

Tinkle says his staff has done a good job of staying familiar with recruits and the portal and making sure they’re involved with good players so that they’re prepared to react and adjust when roster spots come open.

“It’s just different,” he said of managing the portal. “There’s a lot of turnover from year to year. You’ve got to be ready.”

Not knowing the players well can be a challenge, which can lead coaches to giving a closer look at players they recruited out of high school.

With so many players available, coaches have to do their research to “make sure they’re the right kind of guys,” Tinkle said.

That involves talking with people who know the players well, including those who coached against them in determining if those players are the right fit for the program.

The Beavers had success with transfers last year, adding key contributors in Warith Alatishe, Rodrigue Andela and Maurice Calloo as well as Silver, who played some big minutes in the postseason.

When including Alfred Hollins’ departure early this past season and the likelihood that senior guards Zach Reichle and Ethan Thompson won’t return despite an extra year of eligibility granted to all athletes due to the pandemic, Oregon State will be replacing six scholarship players after filling five spots on the roster last offseason.

The Beavers have officially signed two players for the coming season — 6-foot-8 forward Ahmad Rand, who played two years at a South Carolina junior college, where he was considered the No. 11 JC player in the country and was a top shot-blocker; and 6-3 shooting guard Dashawn Davis, another junior college player.

Rand played limited minutes in three games at Memphis last season before deciding to transfer. Davis was the seventh-ranked JC player in the nation.

Last week, 7-foot-3 Chol Marial, who played at Maryland last season, announced on social media that he had committed to Oregon State. The center from South Sudan, who will be a junior, averaged 1.6 points and 1.1 rebounds last season while playing 6.2 minutes and making one start in 18 games.

Xzavier Malone-Key, a 6-4 guard who played two years at Fairleigh Dickinson after one year at Rider, said in December that he was transferring to Oregon State. Malone-Key, who opted out of this past season, averaged 12.3 points and 3.3 rebounds at FDU in the 2019-20 season.

If Marial and Malone-Key sign and no other current players decide to transfer, that would leave the Beavers with two of the maximum 13 scholarships to fill.

“I don’t know that we’ll see a bunch of impact in this year’s recruiting class because (the NCAA run) was so recent,” Tinkle said. “But certainly in the ‘22 class and beyond, being involved with players that followed our success and are excited about what we’ve been doing.”

Oregon State men’s basketball made an addition with Wednesday’s announcement of the signing of Marquette transfer Dexter Akanno.

Ethan Thompson pushing to improve his chances in professional basketball

Oregon State head coach Wayne Tinkle holds up the trophy after his team defeated Colorado for the Pac-12 tournament championship. Five-plus weeks later, Tinkle and his staff are working to fill out next year's roster and looking at players for future recruiting classes as well.

Wayne Tinkle and his staff hope to find impact players in the transfer portal as they did last offseason with Warith Alatishe (10), who joined Oregon State after two years at Nicholls State.