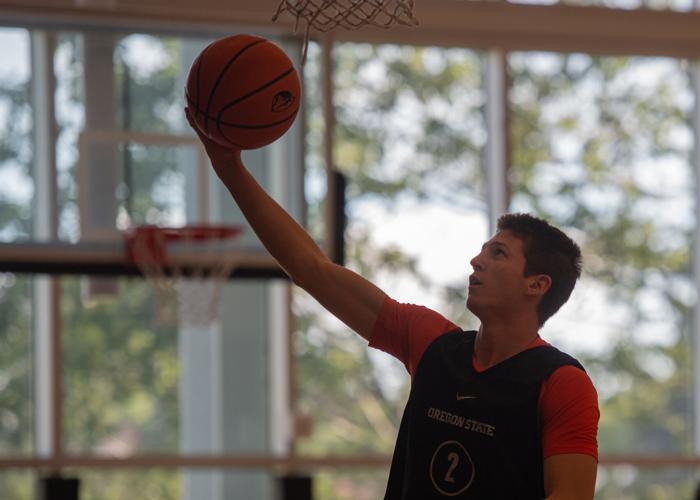 Nick Krass, a true freshman guard from Mississippi, said he's willing to do whatever it takes to help the Oregon State men's basketball team. Krass is a 3-point shooter who enjoys playing defense. 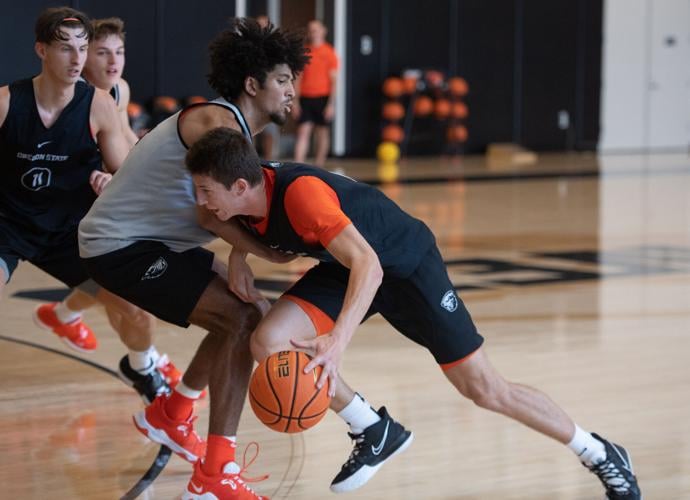 Nick Krass attempts to dribble past fellow Oregon State freshman Jayden Stevens during a recent practice. Krass said he's enjoying the competition of taking on players who are bigger and faster than those he faced in high school. 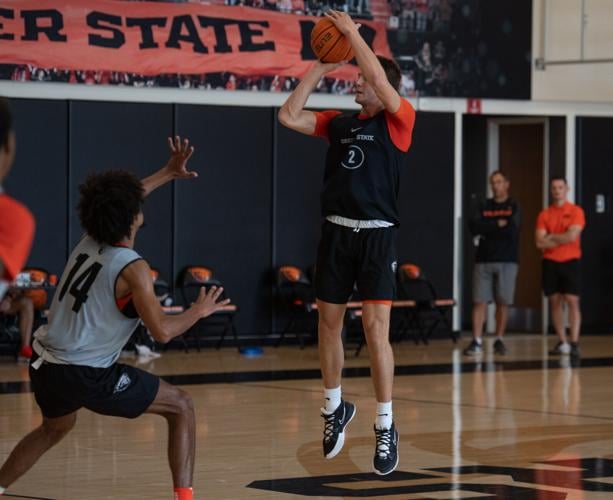 Oregon State freshman Nick Krass shoots a 3-pointer during practice. Beavers coach Wayne Tinkle says Krass is more than just a shooter, but also someone who can make plays off the dribble for himself and teammates.

College basketball provides a challenge that Nick Krass says he’s ready to take on as he makes the transition from the high school game.

The 6-foot-4, 190-pound freshman shooting guard from St. Patrick Catholic in Biloxi, Mississippi, understands what’s ahead of him as he gets his start at Oregon State. He’s a newcomer looking to find his spot on a new team while adjusting to a higher level of competition.

“Everybody here is super good and super talented. So it’s finding my role and doing whatever I can to help the team,” he said. “Bring energy, play defense, knock down 3s, mid-range jumpers. Coming off the bench. Whatever coach (Wayne) Tinkle needs me to do, I’ll be happy to do it.”

Krass, who committed to the Beavers in March and signed with the program in April, says his strengths are shooting, providing a spark on the court and defense. “I love to play both ways.” Coaches have different defensive tactics, and Krass has been watching film with OSU assistant Tim Shelton as he learns a new style on that end of the floor.

When Krass signed in April, Tinkle said the first-team all-state selection and National Honor Society member from Gulfport was one of the better all-around shooters that the Oregon State staff identified in the 2022 recruiting class. But, the coach added, Krass is more than that.

“He can put the ball on the floor to create for himself and his teammates, has a good mid-range game, and the athleticism and skill to finish at the basket. He's also a willing defender on and off the ball and a great communicator on the floor,” Tinkle said. “He'll bring a level of toughness we've been missing, especially defensively, and the ability to make shots within our system.”

In the short time they’ve played together so far on the OSU campus, new teammate and fellow newcomer Christian Wright has been impressed with Krass on the offensive end.

“He has a cerebral pull-up game. The way he gets his shots off against taller defenders is impressive,” Wright said.

Krass admits that it has been challenging being surrounded by players who can test him at every turn. Each day is a day to get better and prove himself among his peers.

“It’s a step up, bigger players, faster players. I love to compete and it’s the best competition there is, and I look forward to getting better,” he said.

Krass committed to Ole Miss in March 2021 after also receiving an offer from Southern Miss and reported interest from Notre Dame. He decided to reopen his recruitment late last year.

What made Oregon State a good place for him?

“First off, it’s beautiful. Just look at this (practice) facility,” Krass said after a recent practice as the team prepares to play three games during a tour of Italy. “Then, coach Tinkle, great guy, great coach, believed in me and I knew he would push me every day in practice. Same with all the other coaches. And I felt he would help me develop as a man and a player, going far away from home and venturing out.”

Krass was a four-year starter at St. Patrick, helping the Irish win a total of 105 games. He was named the Kenny Payne Classic Most Valuable Player, was the Hoopfest 3-point champion and was a team captain and played in the North vs. South All-Star Game.

Now at Oregon State, Krass has been able to lean on the returners as he learns a new system and expectations on and off the court. Those new teammates have been “amazing, motivating and helpful,” he says.

He’s working on pick-and-roll situations — anticipating opportunities late in the shot clock — as well as moving without the ball and being a shooter.

"The coaches believe in me. Everyone I met felt like family,” Krass said of Oregon State being a good fit when he signed. “The campus felt like home. I believe I can help win games.”

Jordan Pope has been influenced through basketball by his father and two brothers, who all played collegiately at some level.

Christian Wright had no hard feelings when it didn’t work out after one season at the University of Georgia.

Corvallis had to wait until the evening on the final day of the regular season Sunday, but the Knights have their opponent for the first round…

Corvallis has kept its foot on the gas heading down the home stretch of the West Coast League baseball regular season.

Everything added up to Joe Casey finding the perfect landing spot for his first coaching job at Colton High School.

You have until this day to let your voice be heard.

This is the third fall camp for Chance Nolan at Oregon State, but his first as the returning starter.

Some late-game magic helped the Corvallis Knights keep their season and a shot at a sixth straight West Coast League baseball title alive.

Tyler Bilodeau has athletics in his blood.

One pitch and one swing changed all the momentum Thursday night.

Dzmitry Ryuny left a place where he felt he wasn’t valued as he was in the past and looked for somewhere new.

Pitching was up to the task again Saturday night as Corvallis won a third straight lose-or-go-home game in the West Coast League baseball playoffs.

The size of Corvallis, with about one-eighth the population of Jayden Stevens’ hometown of Spokane, Washington, didn’t push him away from purs…

Behind freshman Tyler Bilodeau's 19 points on 8-of-9 shooting, the Oregon State men’s basketball team recorded its second straight victory in …

Wayne Tinkle says his team’s recent trip to Italy couldn’t have come at a better time.

Oregon State men’s basketball will open the main part of its Pac-12 schedule Dec. 31 against Oregon in Eugene, the conference announced Thursday.

Nick Krass, a true freshman guard from Mississippi, said he's willing to do whatever it takes to help the Oregon State men's basketball team. Krass is a 3-point shooter who enjoys playing defense.

Nick Krass attempts to dribble past fellow Oregon State freshman Jayden Stevens during a recent practice. Krass said he's enjoying the competition of taking on players who are bigger and faster than those he faced in high school.

Oregon State freshman Nick Krass shoots a 3-pointer during practice. Beavers coach Wayne Tinkle says Krass is more than just a shooter, but also someone who can make plays off the dribble for himself and teammates.