Become a Member
Read Today's E-edition
Share This
OSU men's basketball: Beavers try to dig out of a 1-6 start
0 Comments
Share this
1 of 2 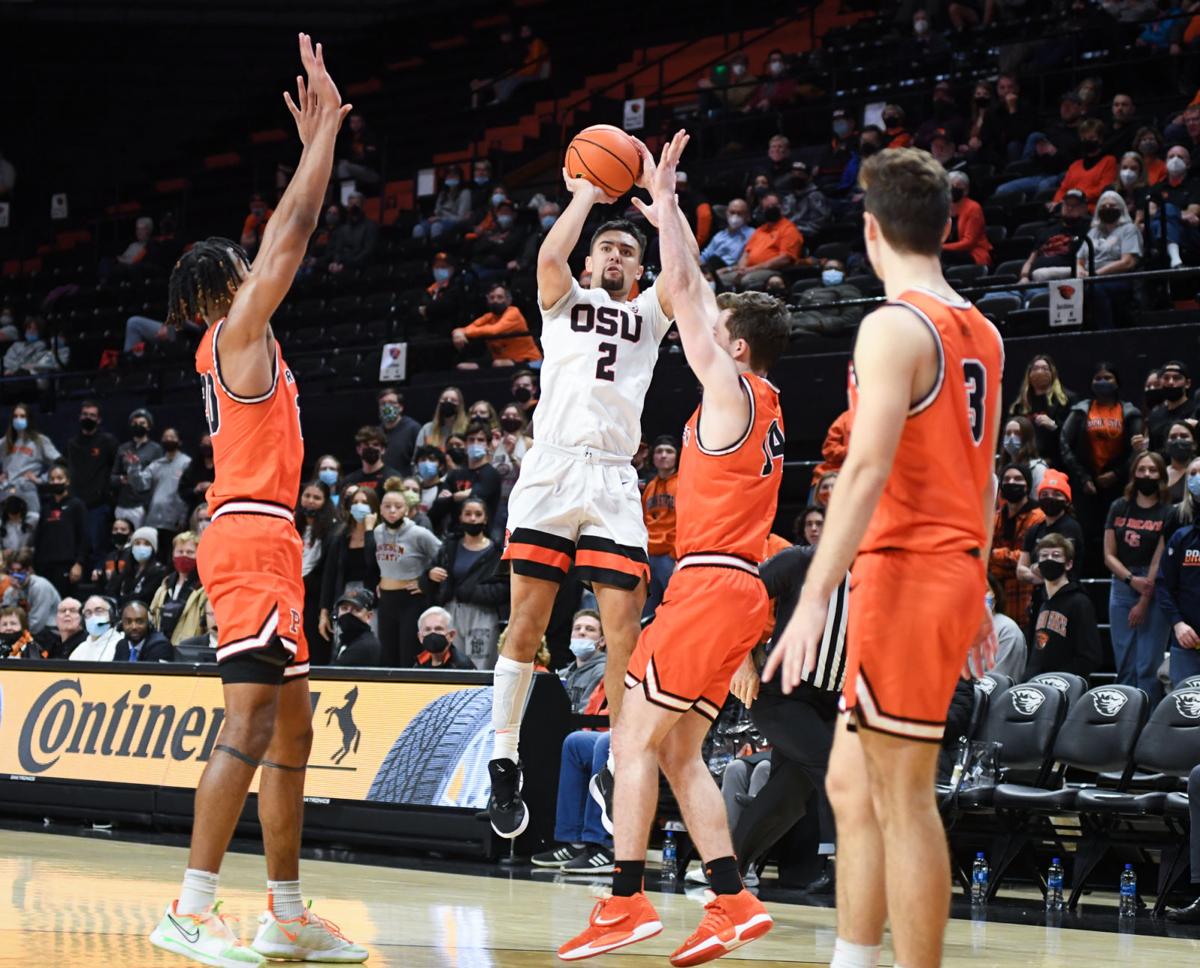 Oregon State guard Jarod Lucas (3) expressed confidence that some of his teammates' 3-point percentages will "even out" as the law of averages takes effect. 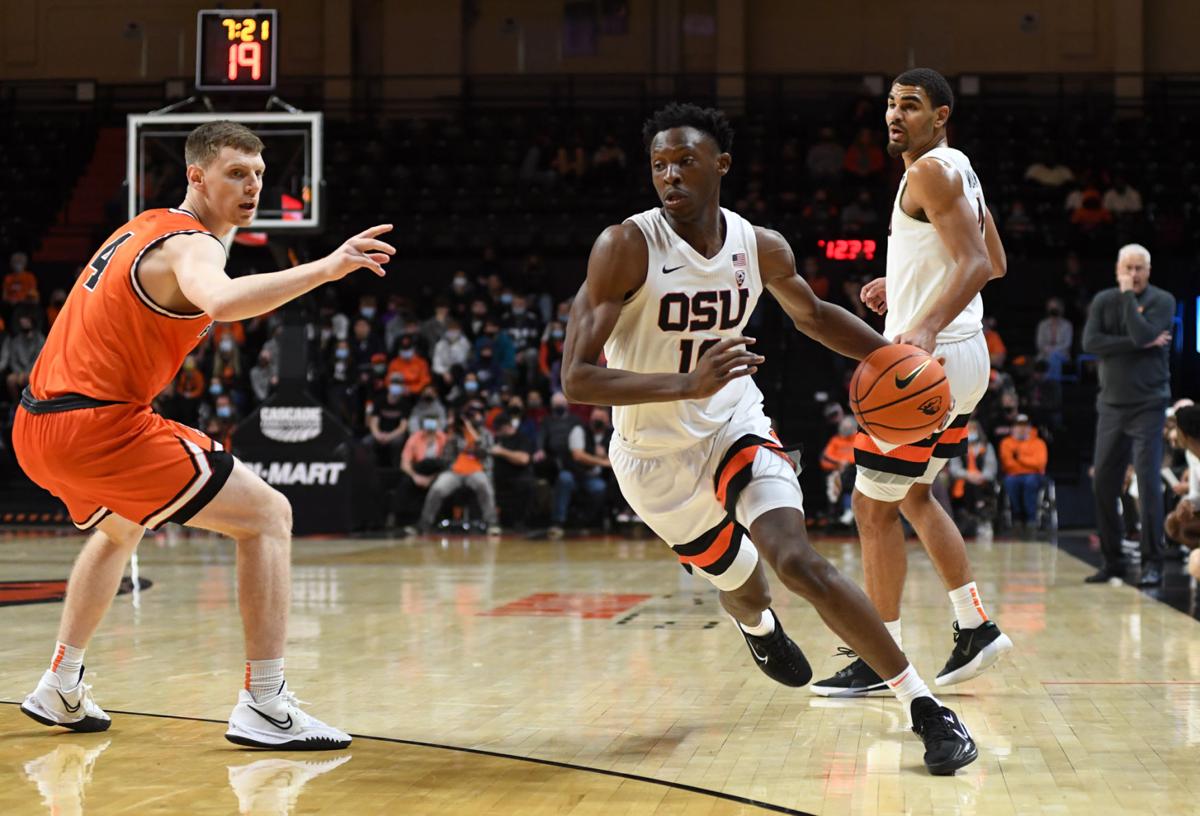 Warith Alatishe and the Beavers open Pac-12 play at California on Thursday, trying to turn around a 1-6 start to the season.

The defense is ahead of the offense, as would be expected, especially with a roster that includes seven new scholarship players, four of whom are averaging more than 10 minutes a game.

The Beavers’ coaching staff is identifying positives to keep the players engaged as all involved try to find the right answers.

OSU coach Wayne Tinkle points out stretches of solid play in losses to Princeton and Wake Forest, in addition to holding opponents to 33.9% on 3-pointers, close to the desired 32%.

“There’s progress we can show them on film, but I still think it comes down to everybody buying into the Beaver way and putting the team first. We knew that was a going to be a challenge with the amount of new guys and guys returning in different roles,” said Tinkle, whose team opens Pac-12 play Thursday night at California (3-4) in Berkeley. “You add a couple tough, close losses, that’s where guys have to dig deep, find what’s inside of them and then pull together.”

In Saturday’s 60-45 loss to Penn State, the Beavers held the Nittany Lions to 40.7% shooting overall but only shot 31.4% themselves. OSU scored just 17 points in the first half and trailed by as many as 26 in the second.

A night earlier, in an 80-77 overtime defeat to Wake Forest, the Beavers rebounded from a 22-point first-half deficit to force the extra period. Oregon State, which has lost six straight since beating Portland State at home in the season opener, has yet to lead a game at halftime this season.

“We’re all still competing, playing hard. The biggest thing is to stay together,” said transfer guard Dexter Akanno. “Obviously it’s kind of hard to get our momentum to winning. Our backs are against the wall. We have to make our own momentum. We have to make something out of nothing right now.”

Tinkle focused on the newcomers earlier this week when he said certain players need to play harder. They’re learning the culture, which the coach says includes “we play our tails off, we play disciplined, we play for each other.”

The Beavers have lost four games by six points or fewer, two of those by a point and another in overtime. The defeats have led to some players allowing doubt to creep into their minds, Tinkle said.

“So we’ve still got everything in front of us,” he said. “We’re trying to keep the guys positive. But they’ve got to understand the urgency needs to pick up a little bit, with how hard we play, how selfless we play. The way that we’ve built the foundation the last seven years.”

The most obvious improvement Oregon State can make is shooting the ball better.

The Beavers have shot better than 40% from deep in three games (Portland State, Tulsa and Princeton), but they were also at 23.5% or worse in the remaining four contests. OSU was a combined 6 of 31 (19.4) in the two games in Florida.

“Eventually the shots are going to fall and there’s going to be a time where we hit 15, 20 3s. It will come. We’re being patient,” Lucas said, adding that he doesn’t believe that some of his teammates are as poor of shooters as their current percentages reflect. “It’s all going to even out. That point could be next game, it could be two games from now. Hopefully sooner than later, but the shots will eventually fall.”

The Beavers appear to have cleaned up their subpar shooting at the free-throw line.

OSU set a single-season school record for the second straight season last year at 76.2% and has increased its overall percentage each of the four seasons.

Oregon COVID-19 cases down but deaths up

Oregon Health Authority reported Wednesday, Dec. 1 that daily COVID-19 cases and hospitalizations are decreasing, but the number of deaths is …

In rural areas, the post office represents identity, community and provides a lifeline as much as it does a connection to the outside world. A…

OSU men's basketball: A look at the opponent — California

Oregon State and California open their Pac-12 men’s basketball schedules Thursday night at Haas Pavilion in Berkeley. Here’s a look at the Gol…

OSU men's basketball: Turnovers, inconsistent play too much against No. 11 Wildcats

Oregon State’s chances at an upset of No. 11 Arizona on Sunday afternoon were done in by uncharacteristic turnovers and a second half where th…

Oregon State guard Jarod Lucas (3) expressed confidence that some of his teammates' 3-point percentages will "even out" as the law of averages takes effect.

Warith Alatishe and the Beavers open Pac-12 play at California on Thursday, trying to turn around a 1-6 start to the season.