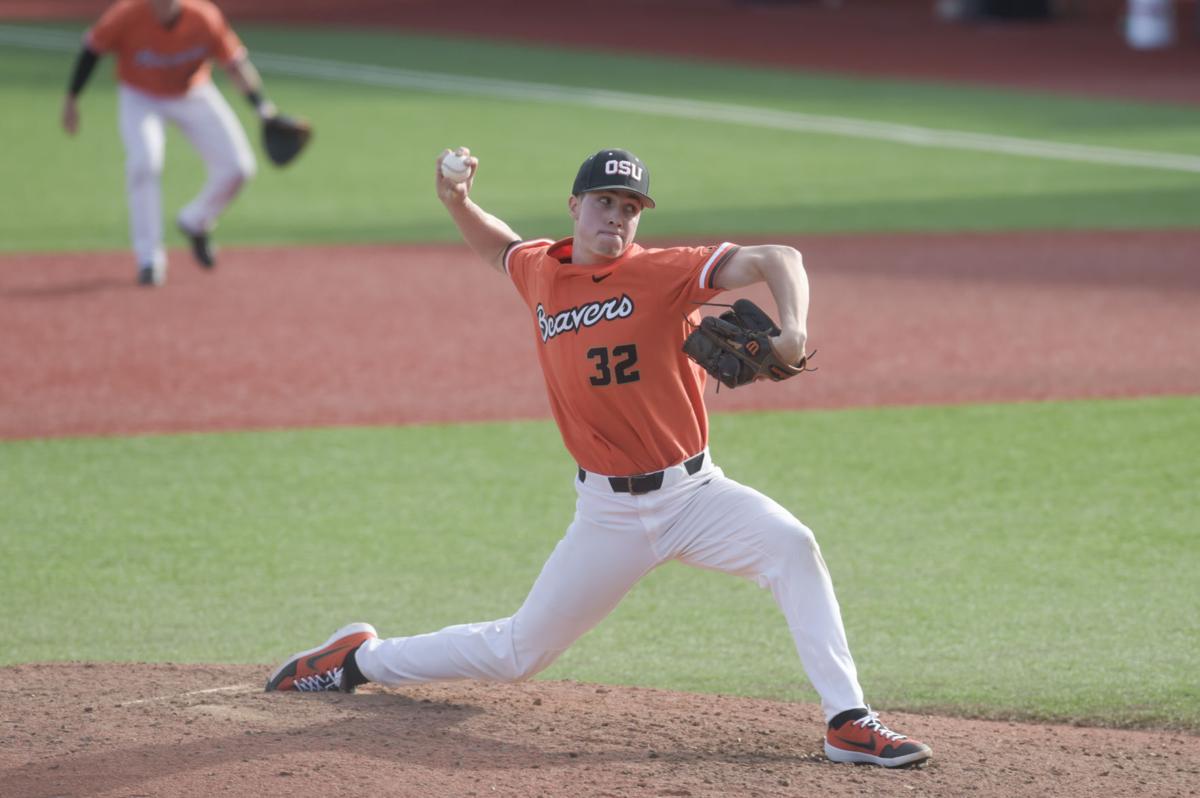 Oregon State's Mitchell Verburg received honorable mention all-Pac-12 in 2019 and has now fully recovered from an elbow injury that interrupted his sophomore season. 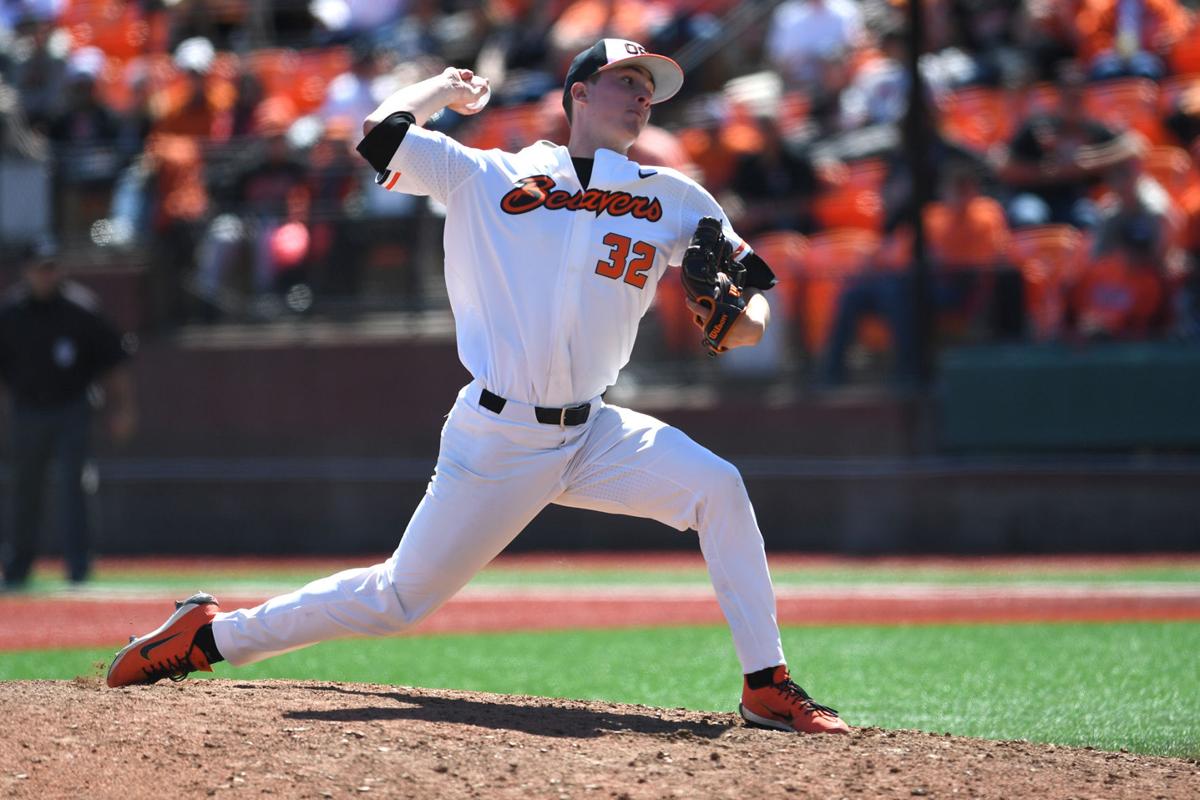 As Mitchell Verburg sat in the training room adjacent to Goss Stadium, he contemplated what came next.

A hard-throwing Oregon State right-hander, Verburg was one of the best relievers in the Pac-12 in 2019. But after a long outing in a game in April, he felt something wrong in his elbow.

That pain was the death rattle that every pitcher fears — a tear to the ulnar collateral ligament that keeps players sidelined anywhere from 12-16 months and unable to throw a baseball for much of that time.

A million thoughts raced through Verburg’s head. Among them were the grueling months to come, and the unfathomable idea of being away from the game he loves. His friend and teammate Kevin Abel had gone through a procedure to repair the same injury a few weeks earlier, and Verburg couldn’t help but notice how terrible the recovery process looked. Now, he was in the same boat.

But he still remembers what then-pitching coach Nate Yeskie told him as he sat on the trainers table.

“‘Yes, you’re a baseball player. But that’s not who you are. That’s not your identity,’” Verburg recalls the longtime Beavers’ assistant saying. “I’m a great human being and I think that’s what I matured in most — knowing that baseball is what I do, but it’s not who I am.”

That conversation shaped Verburg’s approach to his rehab and helped him get through the hard days. He didn’t just want to come back with a healthy arm and a sharp fastball, he wanted to become a smarter baseball player, a better teammate and a more mature person. Now fully healthy and ready to settle back into the Beavers’ bullpen, he’s grateful for the journey that has brought him to this point.

“I think in the beginning it’s very hard to realize how an injury can possibly help you,” Verburg said. “But it’s really pushed me back. I’m really happy with the fact that I’m still here. I’m an old guy and I can really show the young guys what it’s like to be a Beav. And I think that's what I’m most happy with.”

Verburg has been full-go during Oregon State’s preseason, and says his elbow feels completely healthy these days. A return to his 2019 form would be a major boost for the Beavers and help solidify a bullpen that is deep on talent but short on Pac-12 experience.

With coach Mitch Canham planning to deploy his best relievers in a number of different roles this season, Verburg and senior left-hander Jake Mulholland figure to form a dynamic tandem that could help the Beavers in a number of situations.

Canham wasn’t around the program when Verburg was last healthy, but he has heard from those who caught him and faced him how imposing a matchup he was.

“I’ve listened to the legend of what he was bringing to the table, how tough he was — not only with his stuff, but as a competitor,” Canham said. “When I watched him this last week go out and throw live, that’s a competitive animal right there. He’s going to be able to go out there and get a lot of outs.”

Instead of opting for the traditional Tommy John surgery that many players undergo to replace a torn UCL, Verburg decided on an alternative procedure that repaired the damaged tendon, rather than replacing it with a graft tendon. He didn’t care to share exactly what that surgery entailed, but he said the specialist who operated on him has never had a patient experience a re-tear.

Verburg did have to undergo a follow-up procedure that he said was “just a quick cleanup” and says he is happy with the road he took to recovery.

Along that road, though, there were plenty of difficult moments. All his life, Verburg’s competitive nature has given him an advantage on the baseball field. But during the tedious rehab process, that competitiveness was sometimes a detriment; there’s no way to simply "compete" through the aches and pains that follow a major surgery, and Verburg often had to throttle back on the aggressive mentality that helped him become the player he is.

“I was beating my head against the wall a little bit,” Verburg said. “I had to hold myself back sometimes. Because at some point you’re going to hurt yourself.”

He credits his friendship with Abel for helping him work through the recovery process. Abel, the hero of Oregon State’s 2018 national title run, has now fully recovered from his own Tommy John surgery and will be the ace of Oregon State’s rotation this season.

Although Abel underwent his surgery a month sooner than Verburg, they were still on identical enough timelines that they could work out together. The two have similar mental outlooks on baseball, and like Verburg, Abel is ultra-competitive.

So they figured out the areas where they could release that competitiveness without hindering their recovery, and drove each other to improve each day.

“Right after we had surgery, the only thing that we could lift was lower half,” Verybrug said. “So I remember being in the weight room with a brace on, with this big safety bar and doing weighted step-ups. And that’s where it really got competitive because that’s all I had at the moment was that weight room.”

Having someone around to push him in the weight room was essential to Verburg’s recovery, and he said he wouldn't be surprised to see an eventual uptick in fastball velocity due to the strength he’s gained in his lower half.

But that work was secondary to the mental aspect of having somebody who understood what he was going through.

Baseball has always been Verburg’s release. Whenever he’s dealt with a problem in life, the game has been there to help him cope. But for four months post-surgery, he couldn’t even pick up a ball, and a return to the diamond often felt a million miles away.

It's easy to imagine a scenario where the two friends, with countless difficult days together now in the rearview, combine to carry the Beavers through games this season.

“I think it’s something that you don’t quite understand until you go through it, just how much baseball means to us,” Verburg said. “To be able to go out there with him — he throws a shutout and I close it out. That would mean a lot."

Oregon State's Mitchell Verburg received honorable mention all-Pac-12 in 2019 and has now fully recovered from an elbow injury that interrupted his sophomore season.