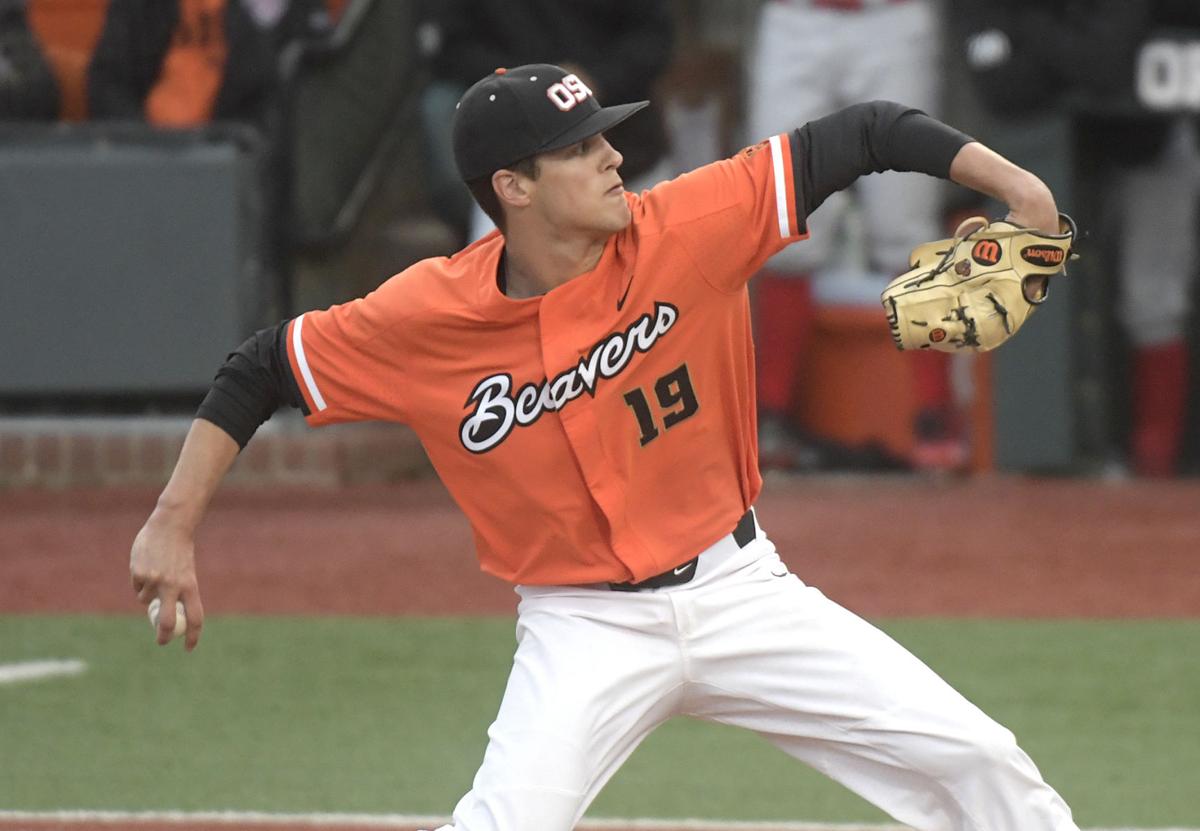 Oregon State's Jake Pfennigs will be one of a handful of pitchers up for a starting role this season. 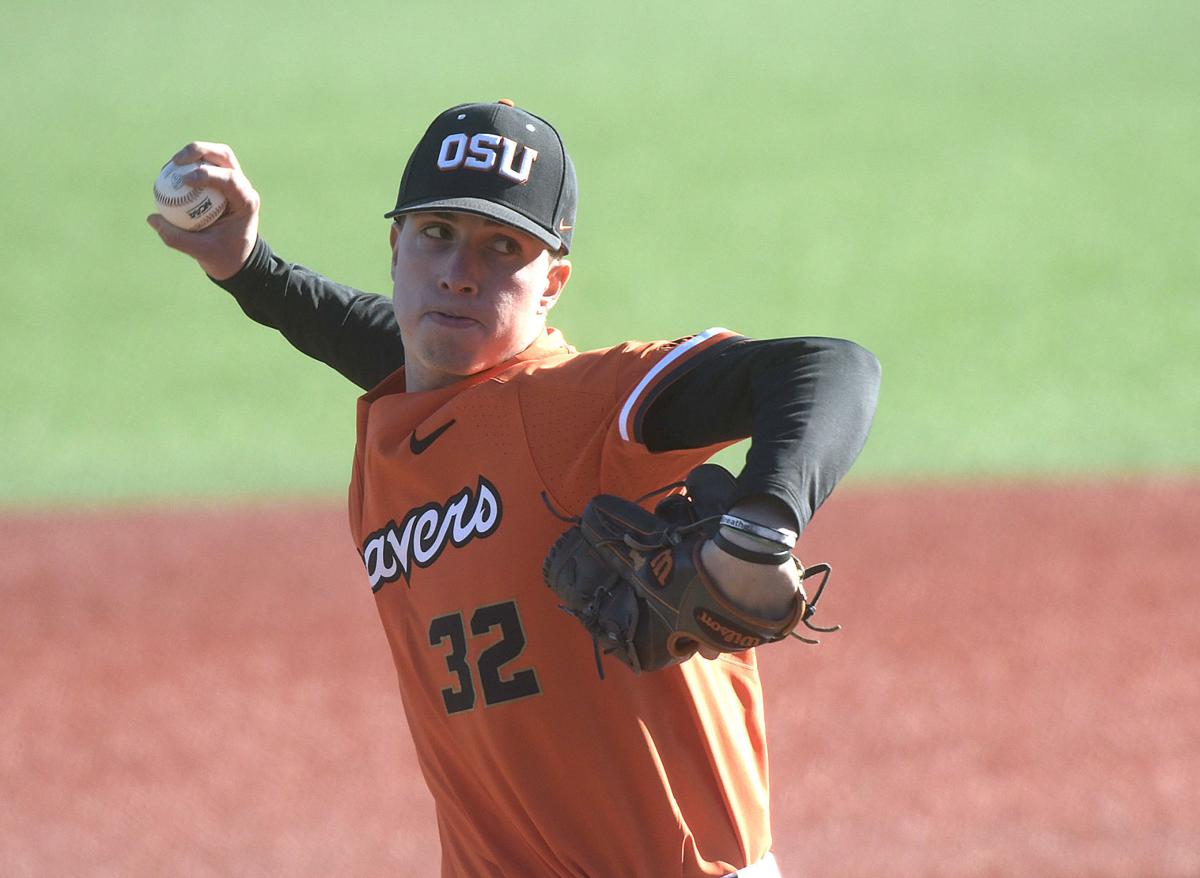 Oregon State junior pitcher Mitchell Verburg is expected to step on the mound at any point in a game for the Beavers.

Oregon State baseball coach Mitch Canham will have plenty of tough decisions to make this season as he figures out how to best deploy his deep stable of pitchers.

One decision, though, will be pretty straightforward.

For the first time in nearly two years, the Beavers have Kevin Abel at full health. Not many teams in the nation have the luxury of sending out a pitcher of his caliber, and if Abel is indeed back at 100 percent, he will be Oregon State’s nailed-on Friday starter and anchor the rotation.

What the rest of the rotation looks like, though, is still somewhat up in the air.

Cooper Hjerpe and Jake Pfennigs were the first two names that Canham responded with when asked who will get the ball on Saturdays and Sundays. But Will Frisch, Nathan Burns and Jaren Hunter are also building up toward starting roles.

Hjerpe, a freshman left-hander, made six relief appearances for the Beavers in 2020 and tossed 3⅓ scoreless innings at Mississippi State.

“We’re very comfortable with the depth that we have,” Canham said. “I think it’s just going to come down to matchup and recovery. But all these guys want the ball. … I think we have enough depth that we might even be doing things a little bit differently, as far as making sure that we’re progressing our guys and not trying to overdo it early on.”

Don’t expect the Beavers to completely lean into the “opener” strategy that some Major League Baseball teams have utilized in recent years. But there may be a few more pitching changes than in years past, in large part because of the sheer number of quality arms available.

The increase is due to the fact that the NCAA has lifted roster size limits to accommodate the extra year of eligibility granted to all Division I players. Some of the Beavers’ pitchers are sure to take redshirt years, but especially early in the season, Canham wants to test pitchers in a variety of situations in order to prepare for Pac-12 and postseason play, and he will have plenty of options.

“We have a couple of guys who are hybrids, who you might see coming out of the ‘pen, from time-to-time, but they also might be starting some games,” Canham said. “I think it’s just based on matchups and how guys are looking recovery-wise. Some guys bounce back really well. They throw an inning or two and then might be ready the next day. So we have to constantly look at what the information is telling us they can do.”

The old cliche that you can never have too much pitching rings especially true during college baseball seasons. Oregon State opens its season Friday in Arizona against Kansas State and will follow with seven more games over the next nine days.

Canham and his staff are adamant that the best, most consistent players are going to play regardless of stature or experience level. But the flurry of early games will also provide opportunities for pitchers to work through struggles, and for Canham and pitching coach Rich Dorman to better understand how they can get the most out of each pitcher.

“You look for opportunities to get certain guys out there and get that experience,” Canham said. “Last year, Jack Washburn was a freshman. Down at Arizona, he threw one inning and you saw stuff coming out of his arm that we'd never seen before. The whole fall, he was throwing 90 (mph), maybe 91. Down in Arizona, he’s 93 and 94, and an already-sharp breaking ball looked even sharper. For him, the development was going out in that second inning and learning how to rest and recover in the dugout and keep your mind right. We wouldn’t have known that about him unless he went out and did it in a game.

"We learned so much just from his first outing of the season.”

The idea of pitching role fluidity won’t be limited to just Oregon State’s starters. At the back end of the bullpen, the Beavers have one of the best lefty-righty duos in the Pac-12 in senior Jake Mulholland and junior Mitchell Verburg. But they won’t be restricted to the dated, rigid concept of using one as a setup man and the other as a closer.

“I want these guys just to be ready to take the ball in any situation,” Canham said. “I can see (Verburg) going out and finishing games, and I can see him coming in in the middle and having big stops. It just depends where the lineup is. I do believe if you’re facing the heart of the order — especially in college baseball — the energy and flow comes really quick. We might want to put a guy in there right now you feel really confident going out and getting a stop.”

OSU baseball: Kevin Abel says he is back and better than ever

The last time the world saw Kevin Abel, he displayed one of the more devastating arsenals of pitches in all of college baseball.

At long last, the Oregon State baseball team has a start date for its season.

After being omitted from every top-25 ranking to start the season, it didn’t take long for Oregon State to play its way back into the national…

Oregon State's Jake Pfennigs will be one of a handful of pitchers up for a starting role this season.

Oregon State junior pitcher Mitchell Verburg is expected to step on the mound at any point in a game for the Beavers.