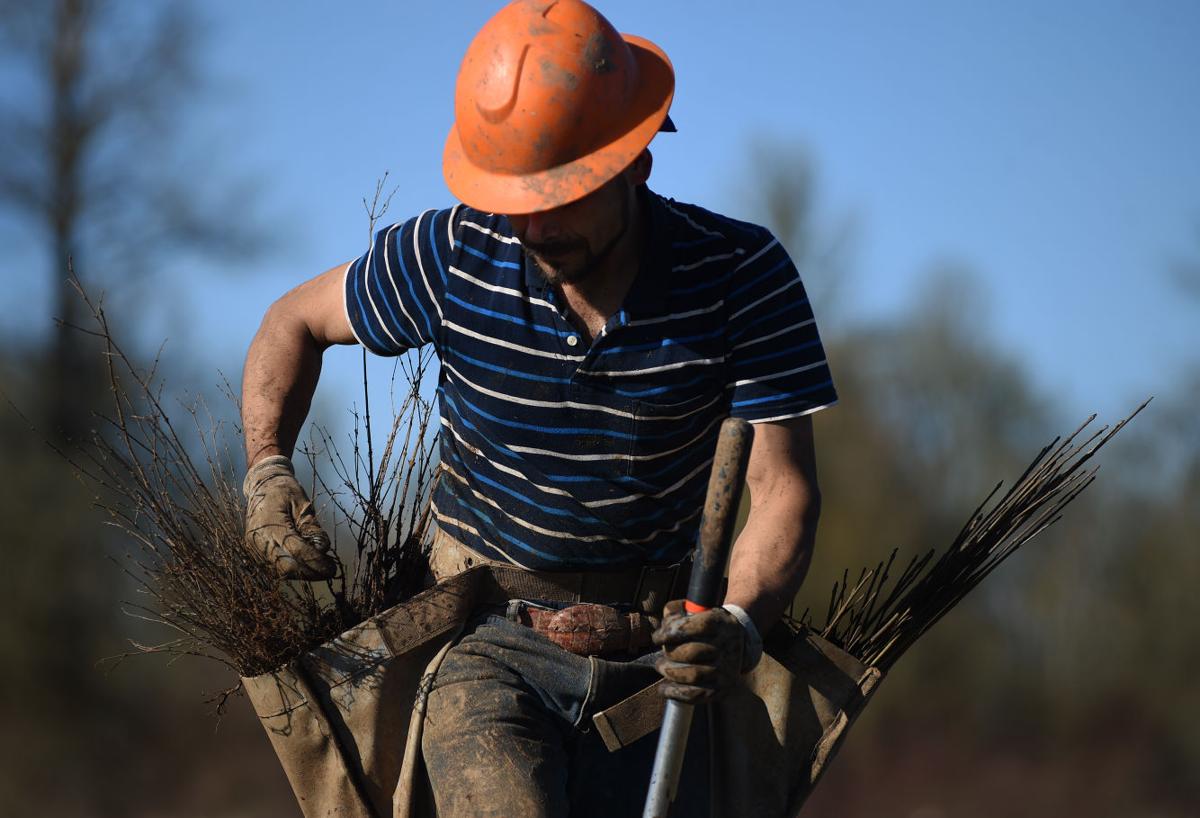 Jaime Blanco plants native shrubs and trees at Harkens Lake on Monday. The Greenbelt Land Trust is restoring the 389-acre former farm property along the Willamette River near Monroe as a floodplain forest to benefit fish and wildlife. 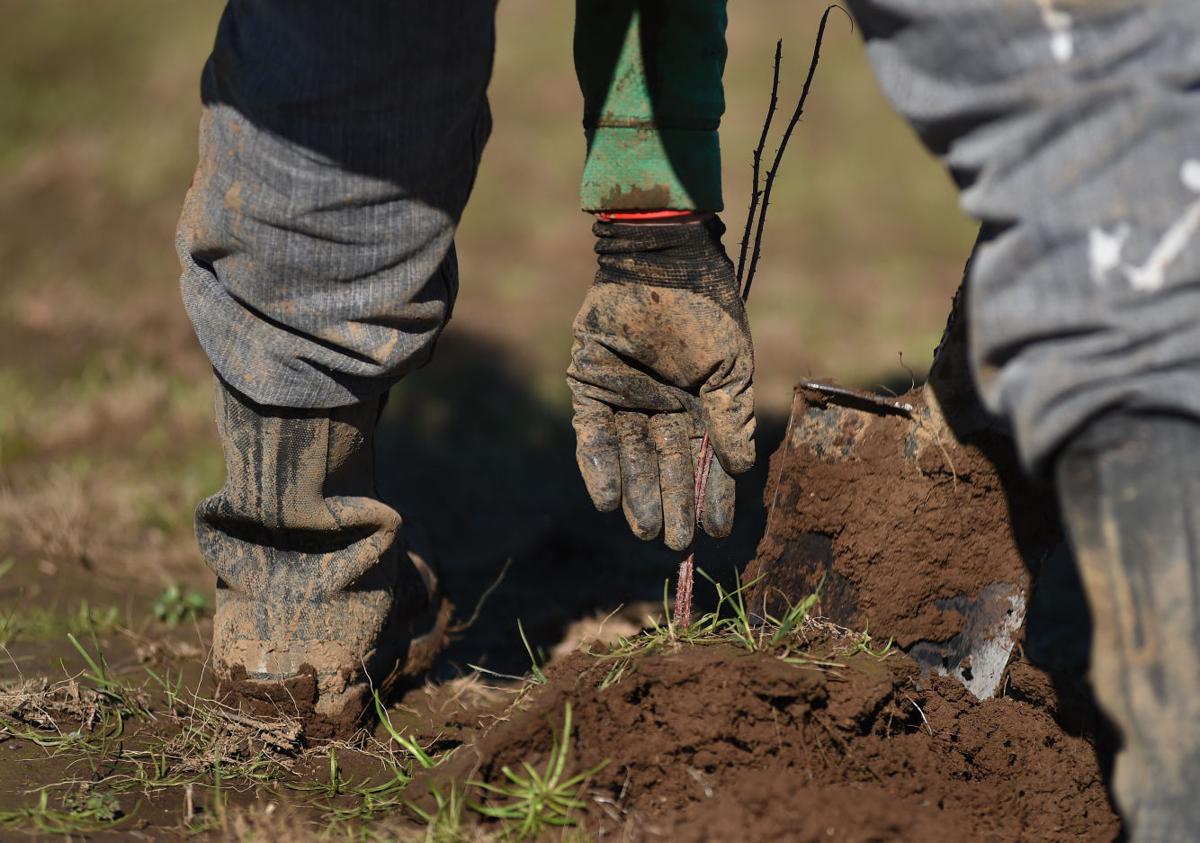 Ivan Ramirez and other members of a crew from Aumsville-based Rosario Franco Restoration planted 111,825 shrubs and trees at Harkens Lake last week. 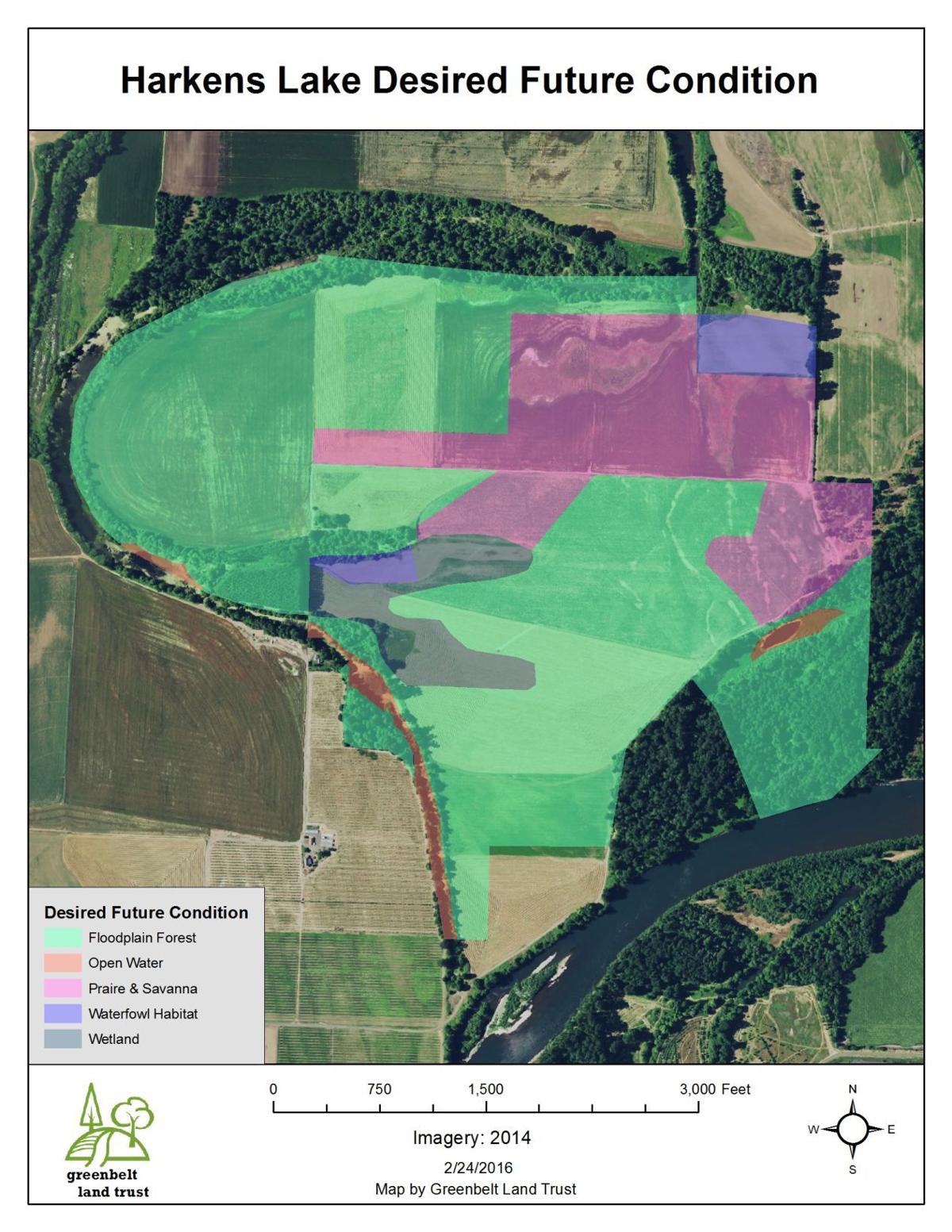 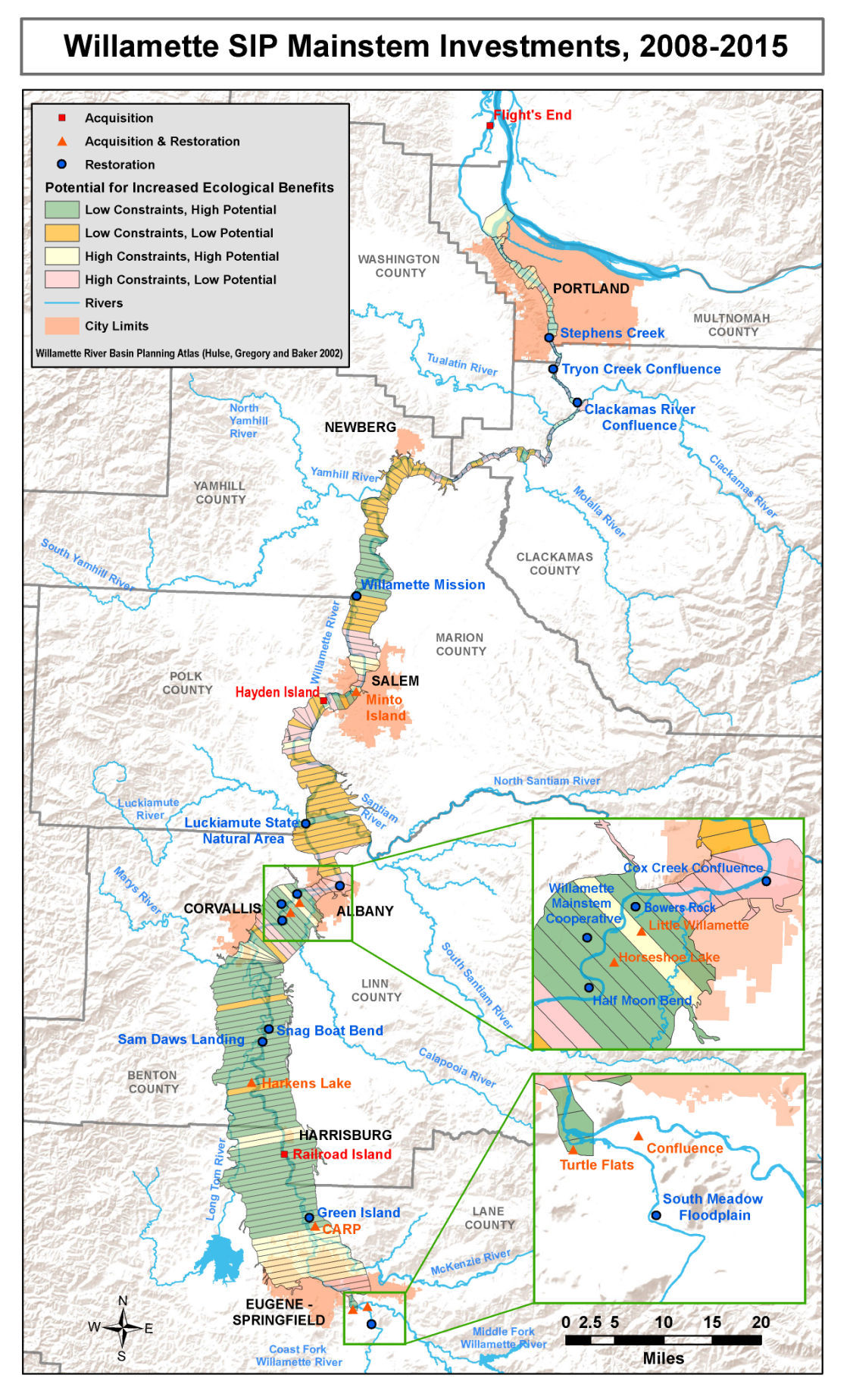 They move in rhythm, striding forward, thrusting a spade into the soft ground, pulling a seedling from a bulging bag that hangs at their waist and bending down to plant it in the hole, then tamping the earth around the young plant with a boot and striding ahead to repeat the process.

Rosario Franco, who supervises the work from the back of a four-wheeler, pauses to survey his crew.

It looks like a traditional agricultural operation, but with a twist: Franco’s workers aren’t planting beans or corn.

Last week’s planting operation was the latest phase in the ongoing habitat restoration project at Harkens Lake, a 389-acre property near Monroe in the southeast corner of Benton County. Located inside the sweeping curve of an old Willamette River side channel, the land has been in agricultural production for generations. But it was always prone to flooding, and the farmers who owned it frequently lost their crops when the river overflowed its banks.

In a series of transactions that began in late 2011, the Greenbelt Land Trust acquired conservation easements on the property. The individual farm families who owned the land got a one-time cash payment and retained title to the property, which remains on the county tax rolls. In exchange, Greenbelt got the right to manage the land for fish and wildlife habitat.

As it turns out, the process of converting land from agricultural to conservation use is a lot like farming – at least the way it’s being done at Harkens Lake.

Over the course of three days last week, workers from Rosario Franco Restoration planted more than 110,000 trees and shrubs at the site. The seedlings were all native species you’d expect to find in a Willamette Valley riparian forest – black cottonwood and Oregon ash, dogwood and willow, bigleaf maple, spiraea, snowberry, thimbleberry and so on. A few areas of higher ground were planted with upland species such as Oregon white oak and Pacific madrone.

Instead of being randomly scattered across the landscape, however, the plantings are precisely spaced at 2½-foot intervals and lined out in neat rows.

“They’re exactly 12 feet wide and they’re laser-straight,” said Matt Blakeley-Smith, the Willamette restoration coordinator for the Greenbelt Land Trust, a Corvallis-based nonprofit that owns or manages more than 2,800 acres in Benton, Linn and Polk counties. “What that allows us to do on these large sites is maximize our efficiency.”

Forest restoration involves more than just planting trees, Blakeley-Smith explained. Before that could happen at Harkens Lake, fields previously planted with grass, corn and squash were sprayed with herbicides to prevent unwanted regrowth.

“There’s nothing native that’s going to come out of an old farm field,” he said. “In order to do a restoration project, we have to clean the slate, so to speak.”

The next step was to seed the ground with native grasses, then plant trees and shrubs. Those plantings will need to be maintained for five years, with periodic mowing and spraying to keep grass and weeds from choking out the growing seedlings before they become fully established. Planting in straight, wide-spaced rows facilitates that maintenance work by enabling the use of mechanized equipment.

“The structure we’re shooting for is a large, open forest with lots of understory species,” Blakeley-Smith said.

“We’ve taken kind of an agricultural approach because the landowners are farmers. They have a lot of expertise that the conservation community hasn’t necessarily taken advantage of before, and we’ve modified our techniques to take advantage of that expertise.”

Gary Horning, whose family owns a large chunk of the Harkens Lake property, said taking part of his land out of agricultural production was not an easy decision. But after years of losing crops to flooding, he was ready to try something different – and he feels good about being involved in restoring some of the floodplain forest that’s been lost since he was a boy growing up in the Willamette River bottomlands.

He and his son, Steve, have had numerous conversations with land trust personnel about the best way to proceed with the restoration work, as have the other Harkens Lake landowners.

“We didn’t want to sell the land. We wanted to have a say in it so it turns out right,” Horning said. “We do look at it like we’re still growing a crop.”

Restoration planting at Harkens Lake is now in its third phase. About 40,000 trees and shrubs went in the first year, followed by 70,000 the second. This year’s work brings the total to almost 225,000 native plants.

That kind of efficiency just wouldn’t have been possible without the use of industrial farming techniques, according to Blakeley-Smith.

“There’s been some slight criticism of that (in conservation circles) because there’s an expectation that nature is random,” he said. “But our expectation is that, over time, there will be mortality and things will fall down and it will look more random.”

For now Harkens Lake still looks more like a working farm than a wilderness, but the transformation has already begun. Survival rates for the initial plantings have been 90 percent, despite last year’s unusually hot, dry weather, and some of the cottonwoods planted in the first phase are now 10 feet tall.

“We should have what we call a closed canopy in 10 years. We’ll have a miniature forest in 10 years or less,” Blakeley-Smith said.

There’s more to the project than reforestation. Parts of the Harkens Lake property are being restored as open prairie or savanna, and the area also contains some ponds and wetlands.

Some of the most significant work involves restoring more floodplain function on the site. Two new culverts have increased the flow of water from the mainstem Willamette through the old side channel that wraps around the property’s western and northern sides, and part of a raised roadbed has been lowered and hardened where it crosses a slough to maintain a better connection with the river.

Both of those changes should produce major benefits for salmon, Pacific lamprey, Oregon chub and other sensitive fish species. Side channels and sloughs can provide a slackwater refuge during raging floods, a source of cool water during the heat of summer and a breeding ground for the insects and invertebrates the fish rely on for food.

The work being done at Harkens Lake is not happening in isolation. It’s one of many restoration initiatives underway along the Willamette, including two others led by Greenbelt here in the mid-valley (Horseshoe Lake and Little Willamette Slough).

The Harkens Lake project is being funded mainly by the Oregon Watershed Enhancement Board and the Bonneville Power Administration, which paid a little over $1.5 million in land acquisition costs. The agencies have also provided about $900,000 so far for restoration work and are expected to chip in another $300,000 or so over the next two years.

The money comes from the Willamette Special Investment Partnership, an ambitious undertaking launched in 2008 that involves OWEB, BPA and the Meyer Memorial Trust with the goal of restoring large swaths of the river’s floodplain to a more natural condition.

“Historically, the Willamette floodplain was a very complex, braided channel that meandered across large areas,” said Wendy Hudson, the interim Willamette SIP project coordinator for OWEB. “Those areas were forested and flooded regularly. It was a very dynamic and healthy environment for fish and wildlife.”

That landscape has been dramatically transformed since the advent of European settlement. Today the Willamette basin is home to 70 percent of Oregon’s population. The river has been dammed, diked and channelized. Farms and factories, cities and towns have sprung up all along the river’s 187-mile course. Most of the cottonwood gallery forest that filled the floodplain has been cut down, and the seasonal flooding that pumped fresh life into the bottomlands each spring has been sharply curtailed.

But projects like Harkens Lake offer an opportunity to restore some of that lost habitat and floodplain function. Land trusts and other conservation organizations, working with willing landowners like the Hornings, are beginning to turn the tide.

A recent report to the OWEB board of directors summarized the investment partnership’s accomplishments so far.

Since 2008, the report stated, the partnership has funded 10 land acquisitions along the Willamette mainstem, permanently protecting 2,880 acres of floodplain habitat and complementing the existing network of publicly owned conservation lands along the river. More than 15 miles of side channels have been reconnected to the river.

Fish habitat has been improved by the removal of 17 passage barriers, restoration of 6 acres of wetland, and the addition of boulders and large woody debris to more than 9 stream miles. Once all currently funded projects are completed, more than 3,120 acres of floodplain forest will have been restored.

The partnership’s Model Watershed Program has also funded similar projects on seven major Willamette River tributaries, resulting in the restoration of 978 acres of riparian corridors along 71 miles of stream. Participating organizations have installed 24 miles of fence and treated 60 stream miles for invasive species such as knotweed.

Altogether, the three funding entities have pumped $52.3 million into the project so far, supporting the state’s burgeoning “restoration economy” and building capacity to continue the work at the local level.

Even with all those accomplishments, a great deal remains to be done, Hudson said, and it will be decades before the seeds being planted today really begin to bear fruit in measurable ways such as mature forests and stronger fish runs. But she’s convinced that the partnership will pay real dividends over time.

“It’s going to take a long time to see a difference in such a large area, but if we do nothing we’ll never see a difference,” Hudson said. “We just have to keep the faith that if we continue to do what we’re doing, we will see a big difference over time. I think that keeps those of us who work in conservation doing what we do.”

Jaime Blanco plants native shrubs and trees at Harkens Lake on Monday. The Greenbelt Land Trust is restoring the 389-acre former farm property along the Willamette River near Monroe as a floodplain forest to benefit fish and wildlife.

Ivan Ramirez and other members of a crew from Aumsville-based Rosario Franco Restoration planted 111,825 shrubs and trees at Harkens Lake last week.