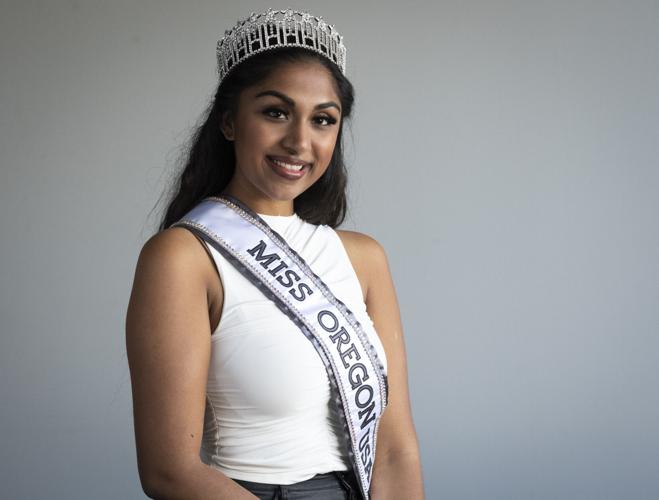 Manju Bangalore is Miss Oregon USA 2023 and hopeful contender for Miss USA 2023. The Corvallis resident is a physicist, actor, model and founder of two nonprofits. 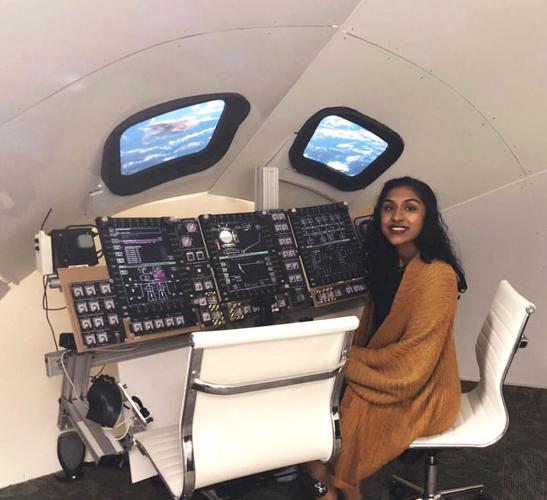 Manju Bangalore at work during a NASA internship.

Manju Bangalore isn’t just another pretty face: the actor and model is a multitalented pageant winner and scientist hoping to reach new heights on earth and beyond.

Bangalore took the crown at the Miss Oregon USA 2023 pageant, held Oct. 15 in Sherwood, besting more than 20 other contestants. The Corvallis resident is preparing to compete in the Miss USA 2023 pageant, which could lead to a shot at Miss Universe.

Miss Universe could be an apt title for Bangalore considering her interest in the stars. A physicist and first-generation Indian American, she more than dreams of space travel — she’s in postgraduate training aimed at possibly becoming an astronaut. And she’s already worked with NASA.

“I just love the possibility that humans can do incredible things like exploring the frontier of space,” Bangalore said. “It’s a unifying concept. And it makes us feel small in a good way; looking out at the galaxy lets you know your problems aren’t as big as they seem.”

Bangalore went to school early on in Tangent and Albany, and has lived in Corvallis since the fifth grade. A mover and shaker, she’s lived temporarily for work in Washington D.C., New York, Los Angeles and more. She graduated from the University of Oregon with a physics degree in 2018.

“Corvallis is home base,” she said. “It’s where my parents live, where all my friends are, where my dogs are.”

During her undergraduate degree, Bangalore had five three-month long internships with NASA: one at Marshall Space Flight Center in Huntsville, Alabama, and four at Johnson Space Center in Houston, Texas, home of the astronaut corps, International Space Station mission operations, the Orion Program, and many future space developments.

“It was the most memorable experience of my life to date,” Bangalore said about working in the astronaut office at Johnson Space Center.

There’s some surprising crossover between space flight training and pageantry. Bangalore said her recent experience training to escape a submerged, upside down aircraft taught her to remain calm despite the creeping anxiety. That translates pretty well to keeping cool under all those eyes watching her on stage, she said.

“When it came to the pageant, I was so relaxed this time around,” she said. “Everyone kept asking me why I’m so ‘at peace.’ I was like ‘because I just drowned 15 times. I’m great now.’ Walking in heels is so easy after that.”

NASA just launched the first of a planned series of Artemis missions with the goal of eventually landing a woman and a person of color on the lunar surface. Bangalore said she’d love to be one of the first women of color on a moon mission. If nothing else, she plans on a commercial space experience.

Among her other noteworthy achievements: Bangalore was a 2018 Corvallis Junior First Citizen nominee, Miss Benton County 2017, Miss Corvallis 2016, and she worked in the White House science office during the last four months of Barack Obama’s presidency.

On top of all that, she appears in this year’s Sports Illustrated Swimsuit Issue, and she has worked with pop icon Beyoncé. While living in Los Angeles, she got signed with an agent, and one of her bookings was a short-notice mystery appearance.

All she knew was she’d be working with a Grammy-winning artist. After some wrangling to get on set, she was escorted to a waiting area. On the way, she learned it was Beyoncé’s Brown Skin Girl video.

Later that night in the waiting room, the creative director came in and told Bangalore and four others not to “freak out,” but they were handpicked by Queen Bey for the shoot.

“I was like ‘Beyoncé knows who I am,’” Bangalore said. “This is the best day ever.”

Beauty and brains aren’t all Bangalore brings to the table; she has heart too. She founded two nonprofit organizations — one dedicated to helping people with Parkinson’s disease through painting, the other providing menstrual products to those in need.

Operation Period, her first nonprofit venture, has distributed more than 300,000 menstrual products as well as health education around the world through student clubs. Bangalore said 20% of U.S. students who menstruate miss school because of their periods. She also noted limitations on supplies under incarceration and a lack of product access for homeless people.

“There’s so many issues with so many demographics,” she said. “We’re trying to address those root causes and fight for a world where menstruation holds no one back.”

Along with her mom, Bangalore is her dad’s caretaker; he’s had Parkinson’s for more than 15 years. Her second nonprofit, Painting with Parkinson’s, gives art supplies and lessons to people suffering from the disease and those caring who care for them. She said art therapy helps with tremors and benefits confidence as well as mood.

At some point she hopes to see her nonprofits dissolved, Bangalore said. That may seem odd, but she said if the underlying issues can be resolved, there would be no need for them. She recognizes that’s probably a moonshot, but says “we’ve been to the moon, so why not.”

Bangalore said it’s important to dispel the myth that pageants are all about looks. These days, she says you have to be educated, stay on top of current events, and have skills and talent far beyond twirling a baton while you smile. The stereotype has been wrong for decades, she said.

“The most confident and intelligent women I know, I’ve met through pageants,” she said. “I hope I can be an example to little girls in Oregon and across the country that you can be a physicist, an aspiring astronaut, an actor, a pageant girl. We don’t have to be confined to one box.”

Cody Mann covers the cities of Corvallis and Philomath. He can be contacted at 541-812-6113 or Cody.Mann@lee.net. Follow him on Twitter via @News_Mann_.

Elmo and Grover were on staff within a week, and it didn’t take long for people to start noticing the sleek newcomers in town.

In the latest counts, a single vote separates two other incumbents, meaning one will have to go.

Local residents can learn more about Unity Shelter and its Men’s Shelter program during an open house and fundraiser scheduled for 11 a.m. to …

Oregon doubles efforts to stay ahead of fatal deer disease

“If you drive by and you have wildlife in your vehicle, yes, you’re required to stop."

Manju Bangalore is Miss Oregon USA 2023 and hopeful contender for Miss USA 2023. The Corvallis resident is a physicist, actor, model and founder of two nonprofits.

Manju Bangalore at work during a NASA internship.