The Benton County District Attorney’s Office has decided not to file criminal charges against the motorist involved in the death of Corvallis cyclist Eric Austin.

Instead, District Attorney John Haroldson has recommended that Jeffrey Scoville, 62, of Corvallis, be cited for speeding and careless driving involving a vulnerable road user. Scoville is scheduled to appear at 9 a.m. Nov. 15 in Benton County Circuit Court on the traffic violations.

Austin, 32, was struck at 7:25 p.m. June 27 while he was in a pedestrian crosswalk in the 1000 block of Highway 99 (Southwest Third Street) across from the First Alternative Co-Op. Scoville was driving a Ford E-350 truck and pulling a cargo trailer. The Corvallis Police Department said the signal lights were flashing when Austin entered the pedestrian crossing.

After a police investigation Chief Deputy District Attorney Ryan Joslin presented evidence in the case to the Benton County Grand Jury on Oct. 12 and Oct. 30.

“After careful deliberations,” Haroldson said in an email to the Gazette-Times, “the grand jury decided not to issue an indictment, meaning there was not sufficient evidence to support a criminal homicide charge.”

The Austin death was a severe blow to the Corvallis cycling community, and the city’s Bicycle and Pedestrian Advisory Board responded with a report to the City Council that made a series of recommendations to help improve the situation, particularly on Highway 99W in South Corvallis.

Councilors responded favorably to the suggestions at their Aug. 20 meeting, and city staff members noted that they already are working on two of them, upgrading the pedestrian crossing lights on Highway 99W and working with the Oregon Department of Transportation on traffic calming measures on Highway 99W.

Data supplied to the Gazette-Times by Corvallis Police Sgt. Jeff Marr, the Police Department's liaison to the board, indicates that Austin is the sixth bicycle or pedestrian fatality inside city limits since 2008. No criminal charges were filed in the five previous cases.

Dylan Horne, an Oregon State University doctoral student in transportation engineering and chair of BPAB, released a statement to the Gazette-Times:

“The tragic death of Eric Austin has shaken our community, and we continue to extend our condolences to his family and all those involved. The application of the vulnerable user law sets a precedence in our community for tougher consequences for those responsible for the death or serious injury of people on our streets. The Corvallis Bicycle and Pedestrian Advisory Board is working with elected officials, engineers and planners, public safety officers, and educators to develop and enact a ‘vision zero’ policy in Corvallis. We are all responsible for the safety of our roads, and we must all work together so that Eric's death is the last traffic fatality in our community.”

Horne also noted that ODOT is developing new striping plans for Highway 99W in South Corvallis (see graphic renderings at this story online). In addition to the rectangular rapid flashing beacons for the crosswalks, signs and pavement marks will be installed too.

Austin’s father Bruce, who works for the Oregon Health Authority, was advised Tuesday of Haroldson’s decision in a meeting that included Joslin. Bruce Austin said that he was appreciative of the “respectful way that I was treated.”

Bruce Austin also expressed frustration with the outcome, asserting that that the burden of proof in such cases might be too high.

“It looks like the grand jury did an accurate job, but that doesn’t mean the system doesn’t need to change,” Bruce Austin said. “And the best outcome, since we can’t get Eric back, is making sure no other family goes through this. We want to make everyone is aware and safe.”

Eric Austin had ridden to the co-op on the day of the crash to buy groceries for a family barbecue. When he did not return, his step-mother went to look for him and learned what had happened.

Austin was born in McMinnville and grew up primarily in Sheridan. He graduated from West Salem High School before receiving a writing degree from Boise State University. While in college, Eric worked with a group of peers studying annotations in books that had been owned by author Herman Melville. He had recently moved back to Oregon and was writing for The Corvallis Advocate.

“Eric was a wonderful member of the community,” his father said. “He was intelligent and kind. It’s a shame to lose him. The only thing that would have made me happy is to be able to have a barbecue with Eric this Sunday.”

See proposed striping plans for Highway 99 in South Corvallis in the online version of this story.

Members of the Corvallis Bicycle and Pedestrian Advisory Board received a couple of pieces of good news last week. 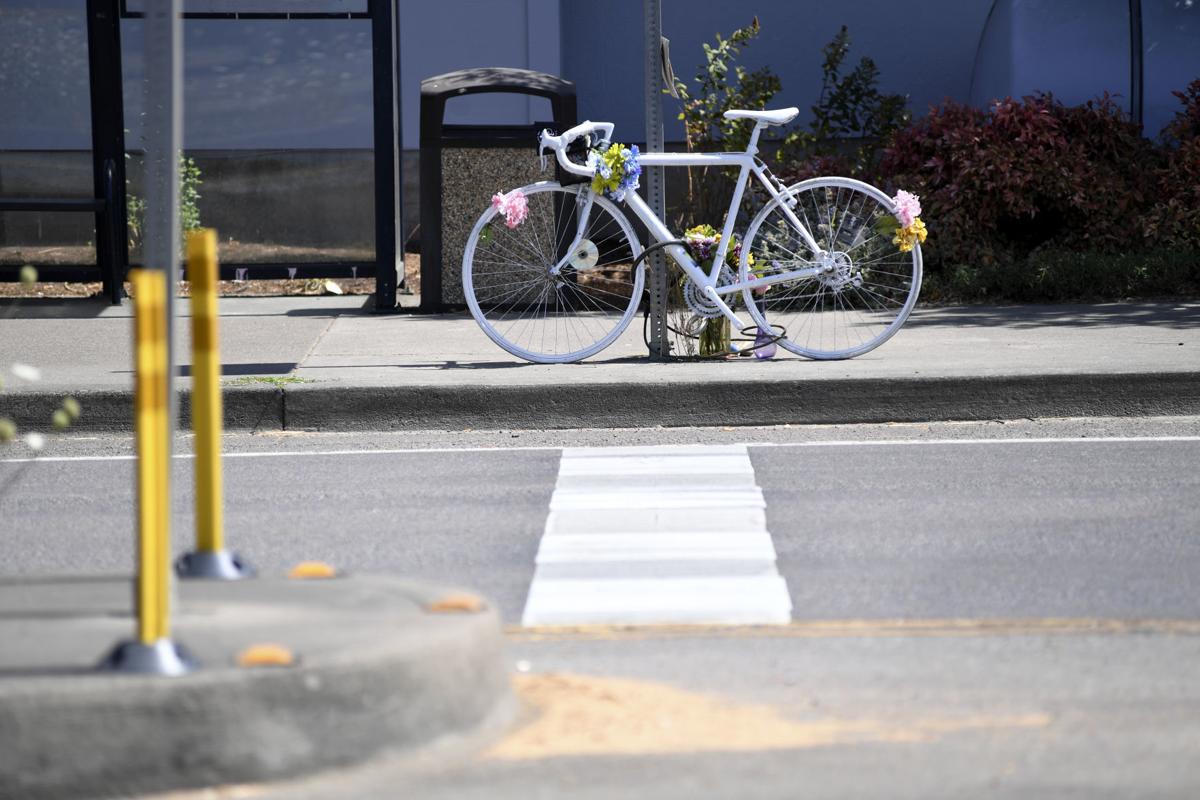 A ghost bike, installed to honor Eric Austin, is shown at the crosswalk where he died in a collision with motorist Jeffrey Scoville on June 27. The Benton County District Attorney's Office has decided not to file criminal charges in the case.