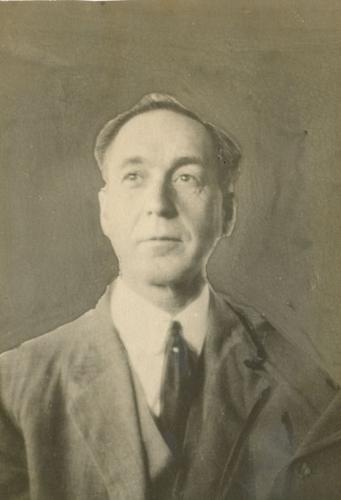 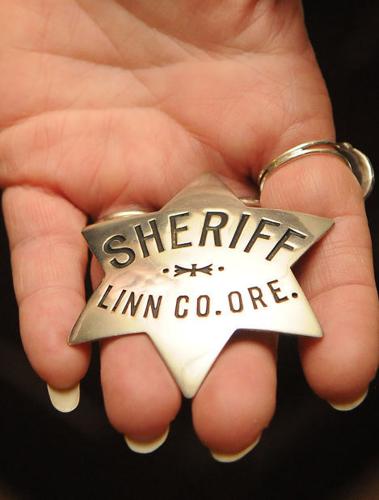 In this 2014 file photo, Judy Broughton of Lacomb holds the badge worn by Sheriff Charles Kendall when he was killed at Plainview in 1922. 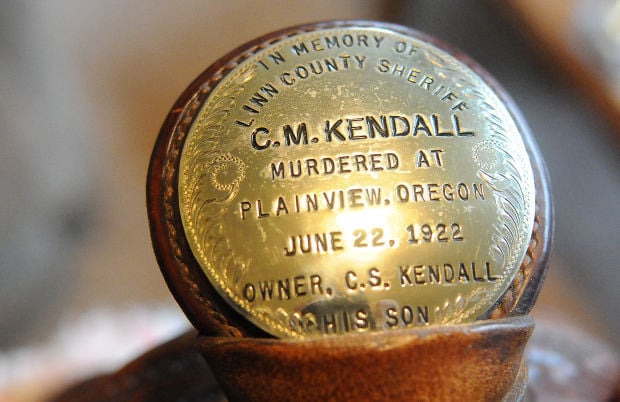 The pommel of the saddle created as a memorial for Sheriff Charles Kendall is decorated with an embossed plate in this 2014 file photo.

Linn County Sheriff Michelle Duncan said that his death illustrates the risky nature of working in law enforcement, even in a pastoral area.

“For me it reiterates that we’re here hoping to protect our community and provide a service and there’s still a danger (to the job),” she added.

Kendall was shot and killed June 21, 1922 while conducting a raid on a Plainview farm. Rev. Roy Healy went with Kendall to the raid and was also killed.

The owner of the farm, 70-year-old Dave West, was reportedly operating a moonshine business during prohibition. West shot and killed Kendall and Healy. According to LCSO, West died by suicide the next day while barricaded inside his home.

Kendall served as sheriff for three-and-a-half years before his death.

Shortly after Kendall’s death, his successor, William Dunlap, was also killed in the line of duty while serving as sheriff of Linn County.

“We’ve been fortunate in our community to have (the community's) support, maybe more so than in other parts of the country,” Duncan said. “We’re also fortunate to only have had two sheriffs killed in the line of duty.”'

For some, this may be the first time they've heard about Kendall. But for former Corvallis Gazette-Times and Albany Democrat-Herald editor Cory Frye, the story stayed with him for decades.

Frye is the author of "Murder in Linn County, Oregon: The True Story of the Legendary Plainview Killings." The book, published in 2016, tells the tale of Kendall's murder and the subsequent murder of Dunlap. Frye, who grew up in Albany, first learned about the murders when he was just 16.

It was 1989. He wandered into a downtown antique store and stumbled across a 1921 local high school year book.

"As someone interested in history who wanted to be a writer, I wanted to learn more about what it was like to be a high schooler in the 1920s," Frye said.

He started cold-calling the students from the yearbook. They told him stories of going to football game and underage drinking. Then, one woman mentioned an anecdote Frye wouldn't forget.

The woman told him about Charles Kendall. Frye was struck by the fact that a sheriff was killed in the line of duty since that doesn't occur too often in modern times. He did what any teenager in the 1980s would do to research the topic: he went to the library.

He searched through archives and tried to learn more about the murder. He even called Kendall's son Clark, who was still alive at the time. Frye's biggest regret is not calling sooner, he said. When he finally did call, he found Clark was in no condition to speak. He died shortly after that.

Frye admitted he probably wasn't mature enough to write the story at the time. But he held onto the story nonetheless.

"I had it in the back of my mind that I would write the story one day," he said.

Finally, around 2009 or 2010, Frye decided it was time to finish what his 16-year-old self started. He spent three years researching, looking through newspaper archives and tracking down descendants of Kendall. As he got older, the story became "more tragic," he said. In 2016, years of research and writing culminated in a published book.

Now, as the 100th anniversary of Kendall's death passes, Frye reflected on not just the book, but on Kendall's life and the impact of his death.

"I think it devastated the town a little bit," he said. "Charles Kendall was really respected."

Let me call your attention to a story that appears in the Sunday edition of your Democrat-Herald and Gazette-Times.

Note: I adapted the following from my manuscript, “Ghosts of Plainview: Hard Times in Linn County, Oregon (1922-23),” which covers events surr…

How ‘Ghosts of Plainview’ came to be

The Linn County Sheriff’s Office has arrested a Foster man on suspicion of sex crimes allegedly committed against a minor.

The Albany Police Department has arrested a Corvallis woman for allegedly assaulting a female and delivering fentanyl near a school.

In this 2014 file photo, Judy Broughton of Lacomb holds the badge worn by Sheriff Charles Kendall when he was killed at Plainview in 1922.

The pommel of the saddle created as a memorial for Sheriff Charles Kendall is decorated with an embossed plate in this 2014 file photo.