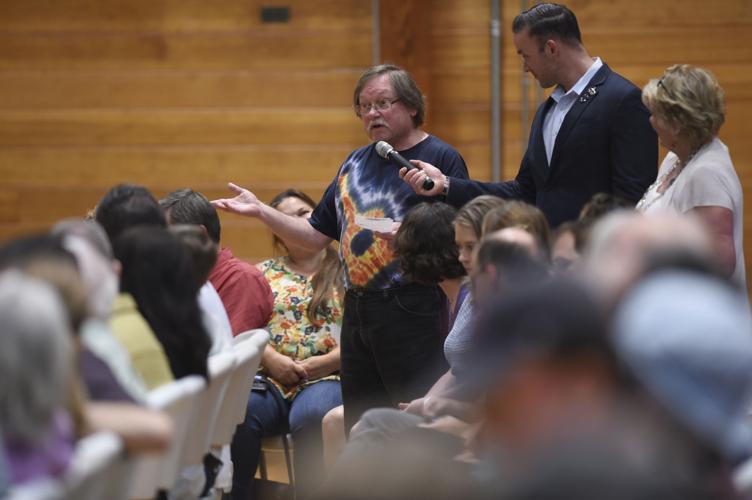 Mark Weiss, of Philomath, sings a song he wrote about health care during Wyden's town hall. 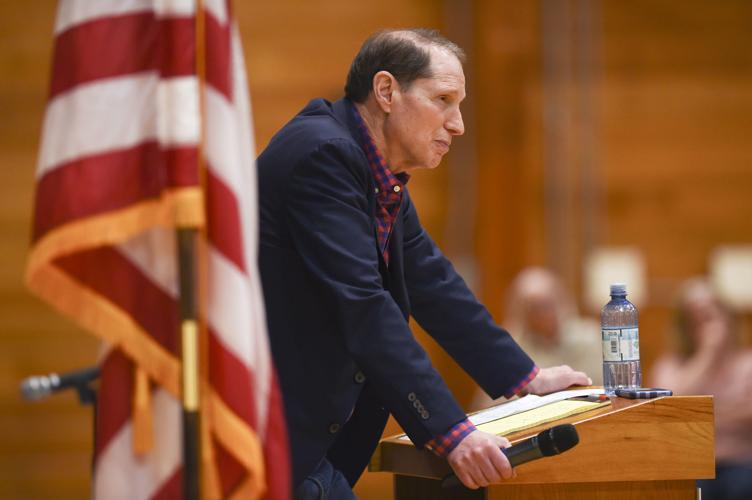 U.S. Senator Ron Wyden listens to a question at the Philomath High School town hall on Saturday, May 27. 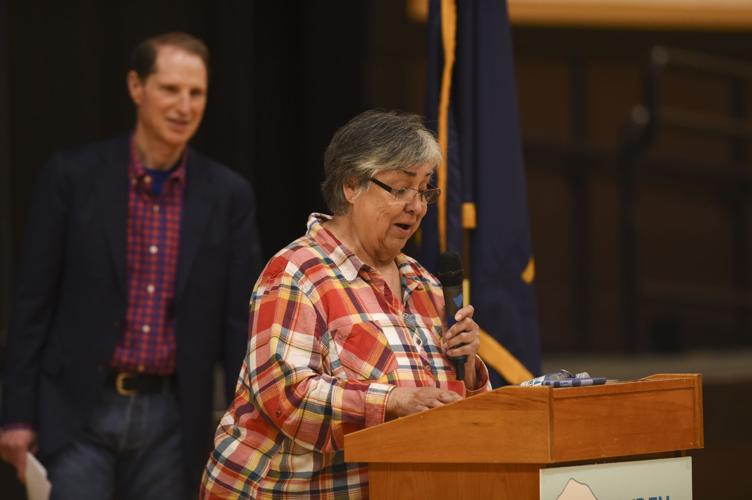 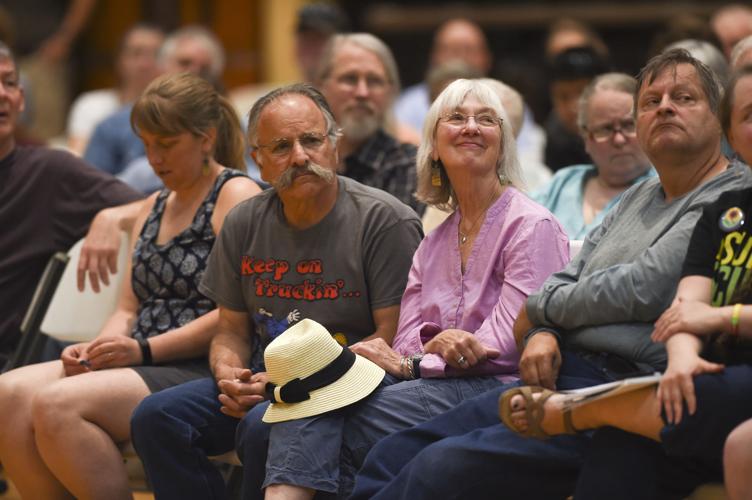 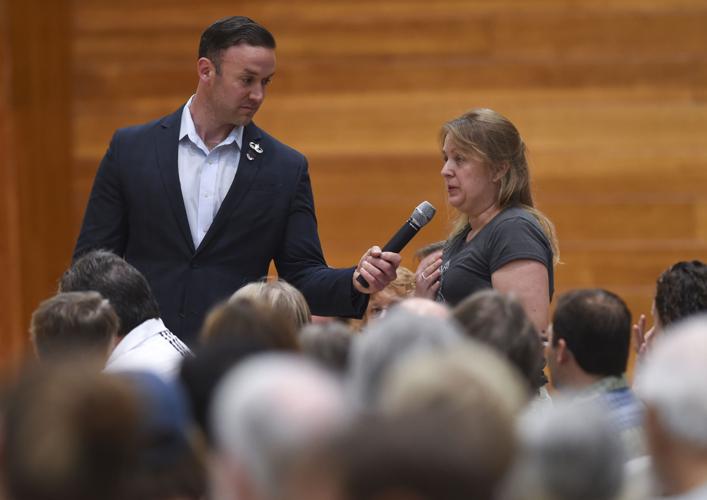 PHILOMATH — U.S. Sen. Ron Wyden began his Benton County town hall Saturday with a moment of silence for two men who were stabbed to death Friday in Portland.

They had intervened when another man yelled racial slurs at two women who appeared to be Muslim, including one wearing a hijab, news reports say. The “good Samaritans,” as Wyden called them, were then fatally stabbed.

“Let us remember these heroes and how they made the ultimate sacrifice standing up for a truly, truly sacred set of principles, respect for all and freedom,” he said.

Saturday’s town hall in the Philomath High School auditorium was Wyden’s 821st town hall in an Oregon county. About 200 people were in attendance. Wyden, who has been a United States senator for Oregon since 1996, strives to make an annual visit to each county in the state.

Many constituents asked the senator about health care. One man sang a song about health insurance, which was met with applause. Wyden said he would fight a portion of President Donald Trump’s budget proposal, which calls for cutting more than $800 billion from Medicaid over the next 10 years.

“It damages Americans and Oregonians from cradle to grave,” Wyden said. “We’re gonna stop this.”

One woman asked what she could do to stop a House bill meant to dismantle the Affordable Care Act. Wyden suggested she encourage friends or family members living in other states to contact their undecided senators and representatives.

Audience members asked about other programs the proposed federal budget would cut or eliminate, such as the National Energy Technology Laboratory, which has a site in Albany. As part of the U.S. Department of Energy, the national laboratory system conducts energy and environmental research.

“I’m going to fight this with all of my strength,” Wyden told the woman, who was worried the lab will close. “I think a lot of us understand how important the work you’re talking about is.”

Wyden suggested the woman provide his staff with specifics about the damages that would be caused by the proposed cuts.

An Oregon State University student told Wyden he was concerned about a funding shortage for the 2020 census, which could lead to an incomplete census. The senator suggested the student rally his fellow students and other university students throughout the country in a movement to properly fund the census.

One man asked Wyden what was being done to combat the lack of accountability in the Trump administration. The senator replied that he is sponsoring a bill, the Presidential Tax Transparency Act, which would require any major-party candidate for president to file a copy of his or her income tax returns.

“The disclosure of tax returns it the lowest ethical bar for presidents,” Wyden said.

See more town hall photos in the online version of this story at www.democratherald.com or www.gazettetimes.com.

Mark Weiss, of Philomath, sings a song he wrote about health care during Wyden's town hall.

U.S. Senator Ron Wyden listens to a question at the Philomath High School town hall on Saturday, May 27. 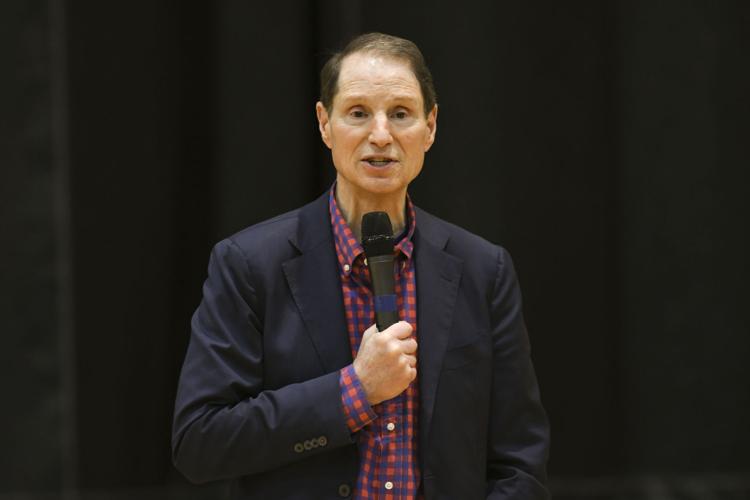 U.S. Senator Ron Wyden responds to an audience member's question Saturday during his Benton County town hall at Philomath High School. About 200 people attended the event. Wyden works to visit every county in the state every year. 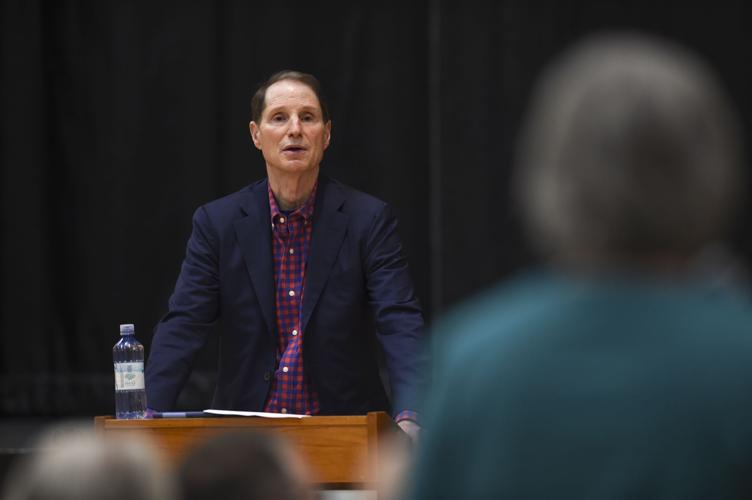