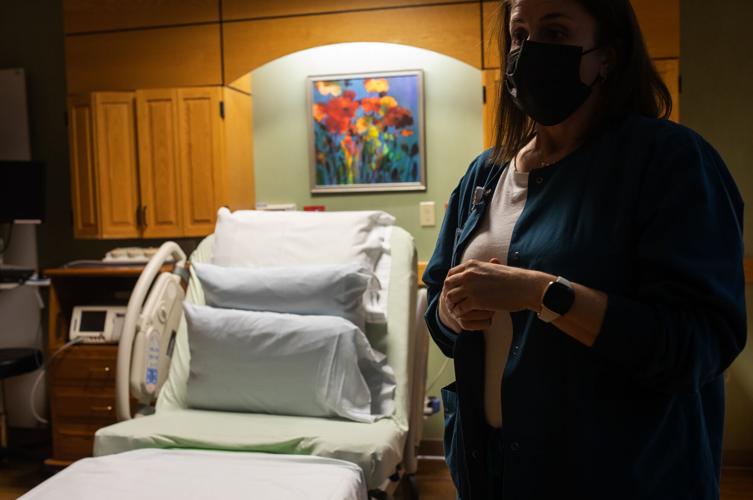 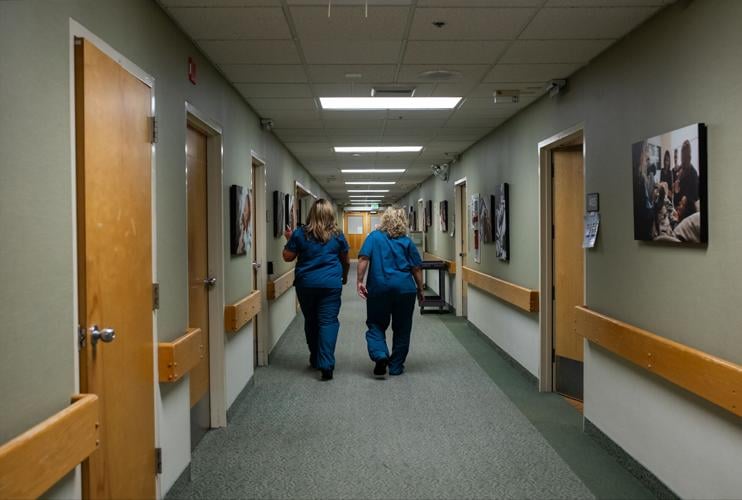 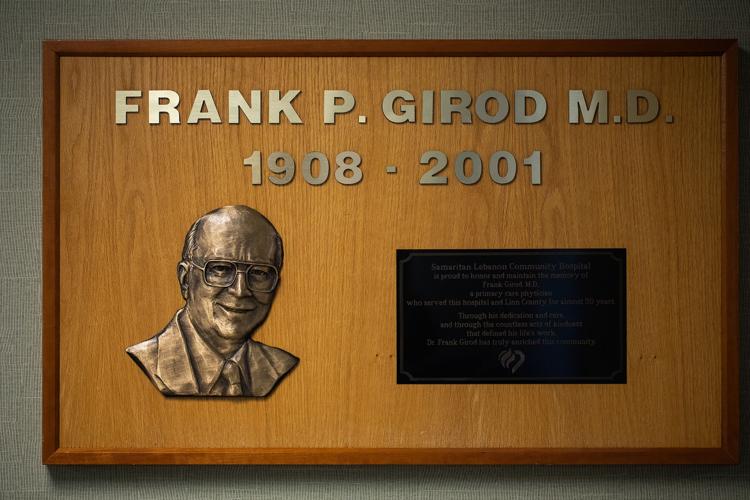 A plaque bearing the ward's namesake is visible on a wall. 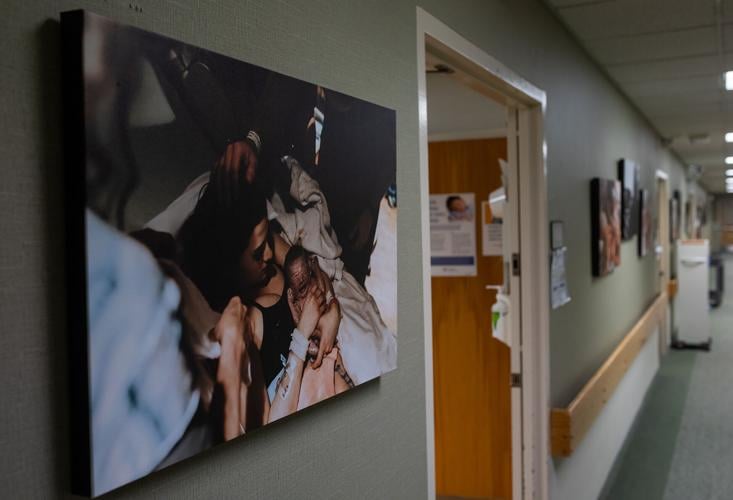 Photos portray scenes of births on the walls in the Girod Birthing Center at Samaritan Lebanon Community Hospital. 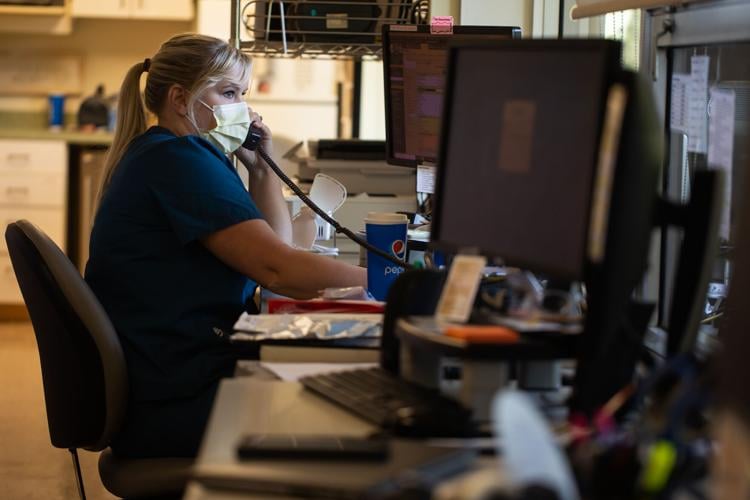 Jennifer Ball, a registered nurse, answers a phone call to a nurse station. 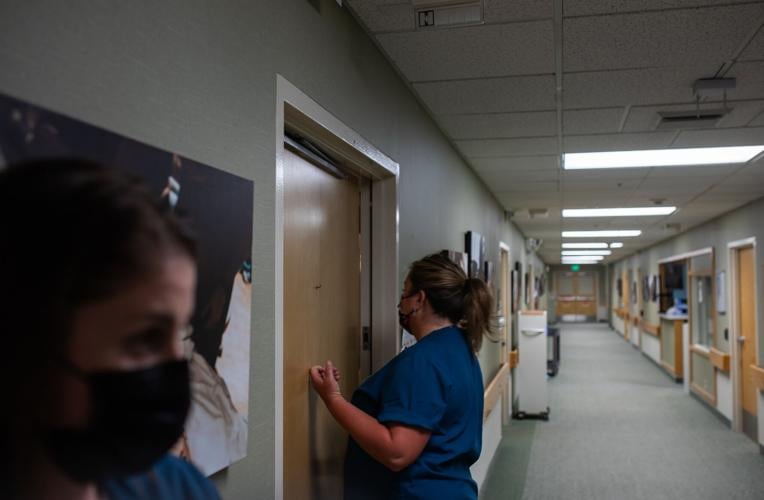 The maternity ward at Samaritan Lebanon Community hospital is set to nearly double in size after outgrowing its decades-old building, hospital CEO Marty Cahill said in a Thursday, Sept. 22 interview.

Prescribed upgrades include more wired ports in walls for medical equipment, soaking tubs for people in labor and space for larger obstetrician teams. Girod Birth Center was last remodeled in the early 1990s.

Executives plan for a 13,200-square-foot renovation by the end of 2023 — an estimated $8 to $10 million addition to the southeastern edge of the 70-year-old hospital.

Girod Birthing Center will have more and larger rooms under modern size standards and an influx of people to central Linn County.

Dr. Frank Girod, the ward's namesake, practiced as a physician delivering babies at the hospital when it opened in 1952. At its last remodel, the center saw about 230 births each year.

By comparison, Girod Birth Center delivered about 320 babies in 2021, according to hospital staff, and more are expected each year.

Populations in Lebanon and Sweet Home were growing in the double digits for several years when the hospital renovated its emergency department in 2016. The hospital anticipates 8 to 11% growth in those cities in coming years.

“We need that additional space,” he said.

The ward will gain an entryway — patients no longer will have to walk past three other departments to get to the birthing center.

And nurses will fare better with contemporary vaulted ceilings, skylights and decorative wooden slats in common areas. They'll have designated break areas, too.

Their spaces now tend to be more diffuse than defined, Kilgore said.

The place where nurses and physicians dictate notes also is the staging area for food on the ward. And the nurses' break spot.

Nurses who can physically separate from their work at break time feel more rested, Kilgore said.

"Everybody benefits," she said.

Rooms where people give birth will be larger under the planned expansion, adding soaking tubs to rooms that don’t have one. Rooms are tapped out, Cahill said, with medical equipment taking up all available space and wall ports.

“We’re monitoring moms in ways we didn’t do 30 years ago,” Cahill said.

Plans also call for a larger operating room in the center for delivering babies by cesarean section.

The hospital takes on students from the osteopathic medical school just to the west across Highway 20, Western University of Health Sciences College of Osteopathic Medicine of the Pacific, Northwest.

Student physicians work in all of the hospital’s clinics and departments, Cahill said. When they’re in the birthing center, a child delivery team can include an outside obstetrician/gynecologist, a hospital physician, a couple of nurses, and resident and student physician.

“The way they learn is hands-on — being involved,” Cahill said.

Samaritan submitted its proposed expansion to the Lebanon Planning Commission for administrative review. The city’s window for public comment on the proposal closes 5 p.m. Tuesday, Oct. 4.

Cahill said the hospital wants to have its expansion “shovel-ready” in early 2023, but construction is pushed back while Samaritan awaits updated estimated prices for materials and labor.

“We’ve shot past that with material shortages and labor,” Cahill said. “It’s not insignificant.”

A plaque bearing the ward's namesake is visible on a wall.

Photos portray scenes of births on the walls in the Girod Birthing Center at Samaritan Lebanon Community Hospital.

Jennifer Ball, a registered nurse, answers a phone call to a nurse station.