‘Here Come the Holidays’ … virtually
Share this
{{featured_button_text}}
1 of 3 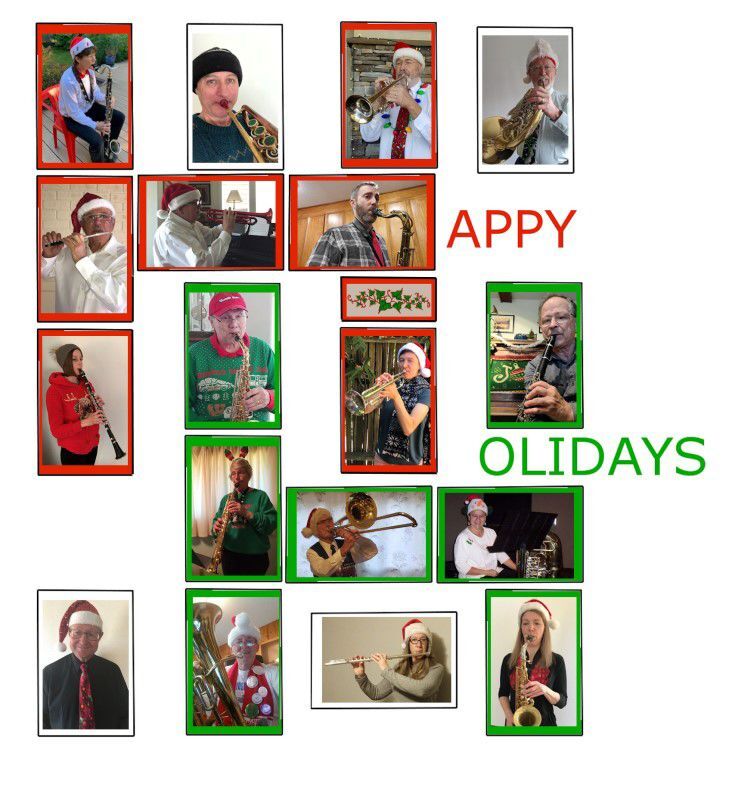 The Corvallis Community Band will be performing a virtual holiday concert on Dec. 8. 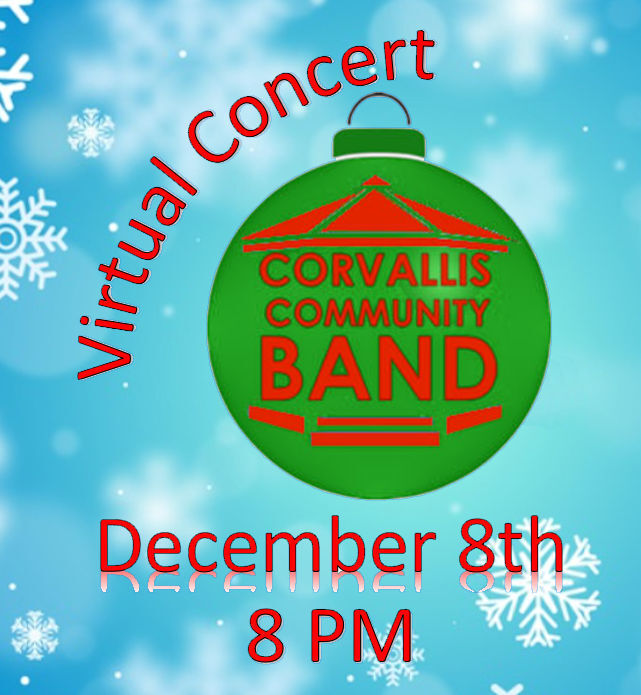 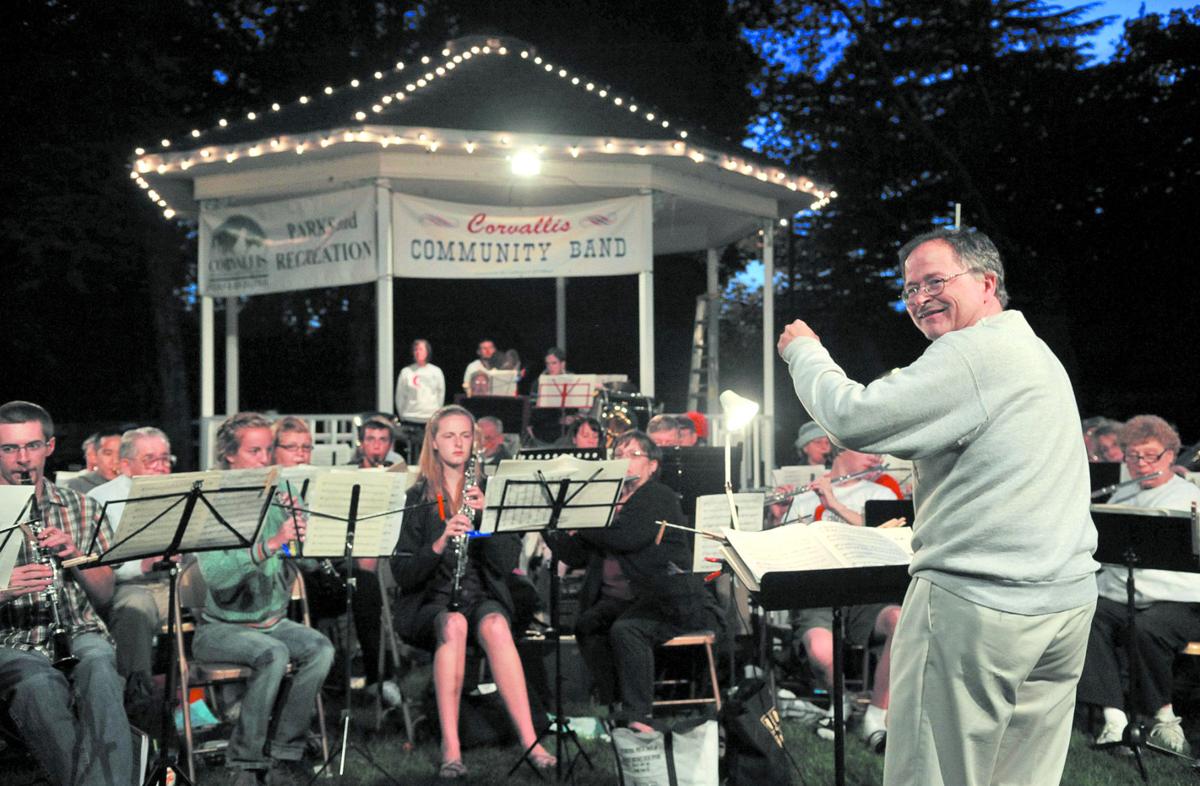 In this file photo from 2009, Steve Matthes leads the Corvallis Community Band in a performance at Central Park in Corvallis.

About 10 years ago, the Corvallis Community Band was getting ready for its annual holiday concert — but Mother Nature had other ideas.

As the band's board president, Bob Schapper, recalls, that year “there was so much ice that we had to cancel the concert. We rescheduled that particular concert, all the pieces that were going to be played, for a July concert we played. It turned out to be really strange.”

But nothing has ever been as strange as 2020, where a global pandemic has kept band members from even rehearsing together, let alone putting on a show.

That isn’t stopping the group from its usual festivities, however. Members of the Corvallis Community Band have two virtual concerts for the mid-valley this holiday season: one each on Dec. 8 and 22.

No “ticket” or admission is required, but as always, the group welcomes donations, which can be made through a link on its web page to either cover general expenses or help with its endowment fund.

The virtual holiday performances weren’t easy to put together. Normally around this time of year, the Corvallis Community Band — re-formed in 1976 and open to any one who plays a band instrument with at least high school level ability — would be gathering for regular rehearsals.

With state-mandated restrictions on what buildings would be open and the number of people who could use them, coupled with members’ own concerns about exposure, that hasn’t been possible. And not everyone was comfortable with using technology to record just their own part for a virtual group performance, Schapper said.

So band members created a hybrid of sorts. Part of the Dec. 8 show will be highlights from previous performances. One piece, from the eight-member ensemble known as Flute Cocktail, was recorded last month under socially-distanced circumstances.

The bow on top will be a virtual compilation of “Jingle Bells,” which features soloist Steve Matthes and which press materials state was recorded “at acceptable distances and compiled joyfully in the most sanitary and responsible manner possible.”

“Jingle Bells” definitely took some work, Schapper said. Piano music had to be scanned in and then all notes other than the melody and bass line eliminated. Then the melody had to be converted so four different types of treble clef and one bass clef could play it in their normal instrument ranges. Then the bass line had to be converted so two different types of bass instruments could play. Then the appropriate part had to be sent to each of the 18 band members, all of whom had to then record themselves playing the entire piece (and take a photo of themselves in holiday attire).

Lastly, Schapper had to take all the audio recordings and photos, decide which four bars of music he would use from each and then put it all together.

The group usually puts on a major concert each March, but would need to know by February whether it will have in-person rehearsal space available to make it work, Schapper said. And as for going virtual again — well. Don’t bring that up just yet.

“It’s not off the table, but I haven’t had more than a week off since the beginning of June,” he said with a sigh. “It is going to come up. And I’ll probably end up saying yes. But it’s something I don’t want to think about.”

So, why do all this again?

“That’s a question that keeps on coming to mind,” Schapper acknowledged. “It takes quite a bit of effort to do what we’re doing. Why so much effort?”

He has answers, however: two of them. The first is self-preservation; getting together keeps them getting together. “The feedback that we get from other band members that aren’t participating is that it gives them a nice, warm, comfortable feeling that the band still exists. We’re doing something to maintain that.”

The second is the desire to keep creating community goodwill, especially at the holidays. “It feels good for us to do that, to make ourselves feel like we’re still useful. We enjoy making music for other people,” Schapper said. “That’s why we’re a band and like to play. We really enjoy entertaining people.”

In a way, he agreed, the holiday shows are a dual Christmas present: gifts to both the community and to the band members themselves.

“As members of the band, we all like to add the voice of our own instrument to the total sound of the band and know that we are doing something that many in the community greatly enjoy. So most in the band just can’t wait until we do what we enjoy doing,” Schapper said.

There are benefits to a virtual show, he went on. Nobody has to worry about the weather or finding parking. Visual images add to the music. And the concert can be replayed as many times as you want — with pauses for breaks anytime.

“We can’t provide the feeling of community that one gets sitting next to a friend or stranger while enjoying a live concert. But we can hope that our viewers can get a little of the warm feeling of the holidays by listening to our concert in the comfort of their homes with a few loved ones,” he said.

“Also, we can hope that the community is encouraged by a local group that refuses to totally surrender to the pandemic.”

WHAT:  “Here Come the Holidays,” a virtual concert by the Corvallis Community Band.

The Corvallis Community Band will be performing a virtual holiday concert on Dec. 8.

In this file photo from 2009, Steve Matthes leads the Corvallis Community Band in a performance at Central Park in Corvallis.