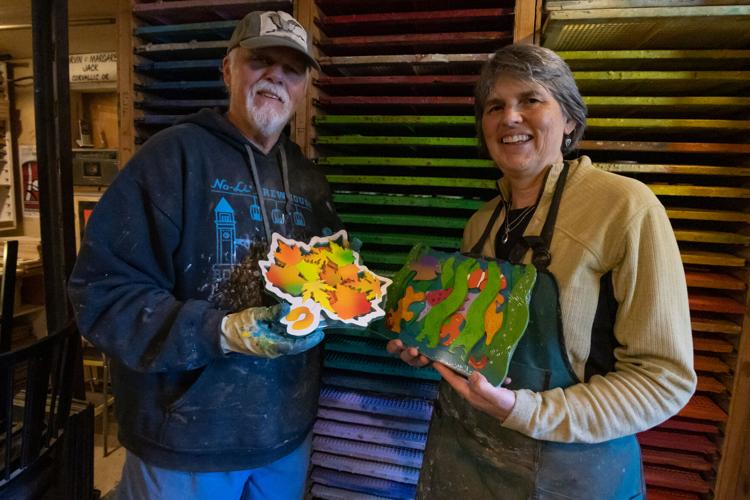 Marvin and Margaret Jack pose with a couple of their handmade puzzles in front of one of their drying racks at their Corvallis home. 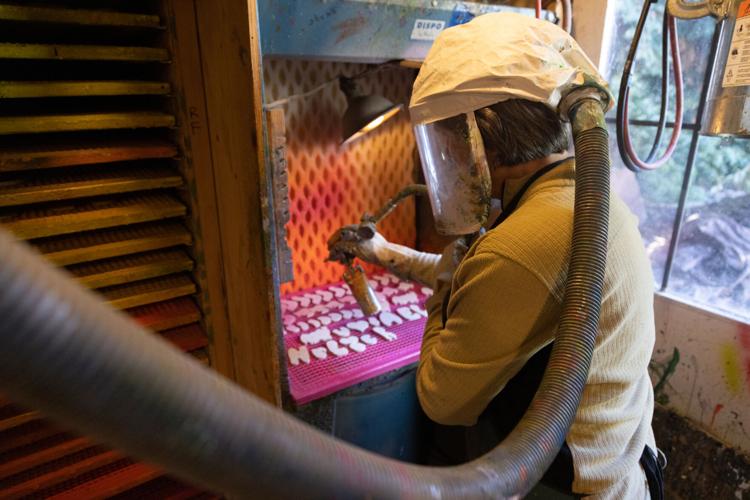 Margaret Jack works on painting puzzle pieces in her home studio. She wears a mask that provides outside air for her to breathe. 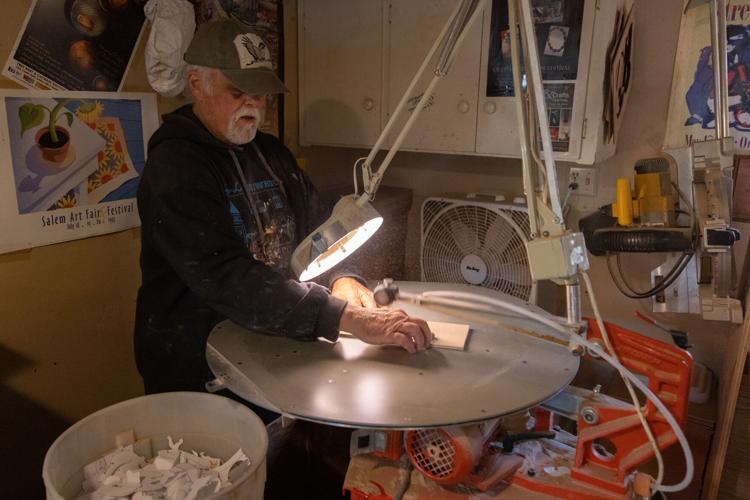 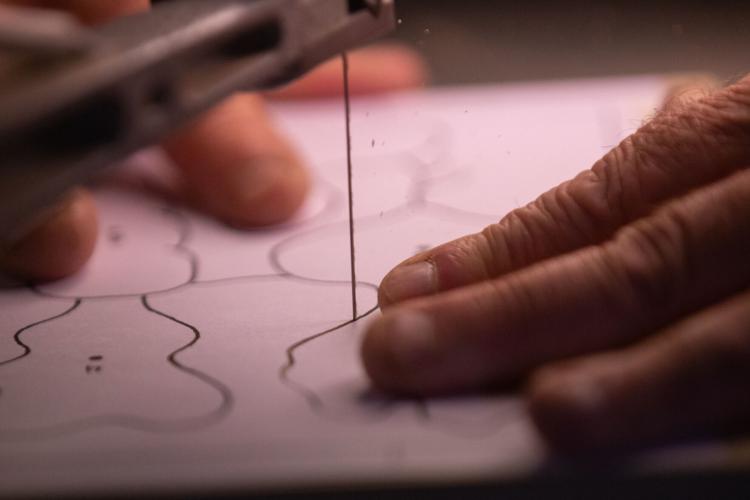 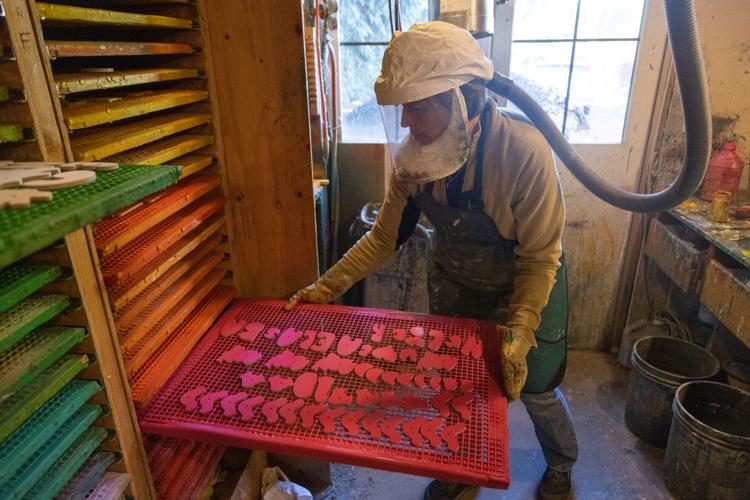 Margaret Jack sets a tray of freshly painted puzzle pieces to dry in her home studio. 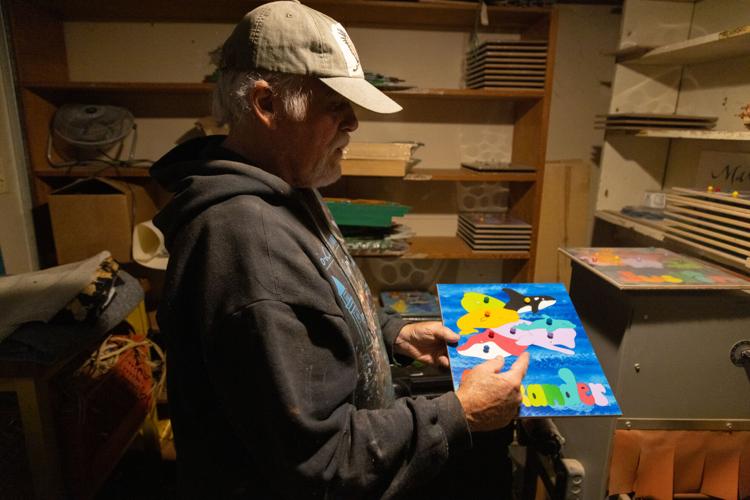 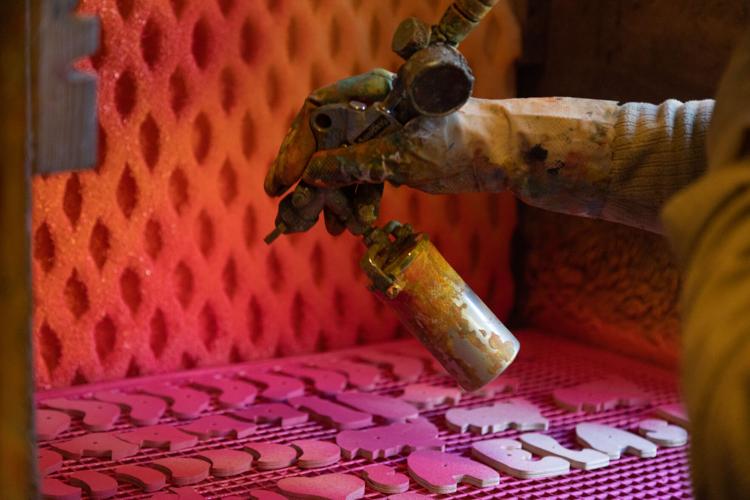 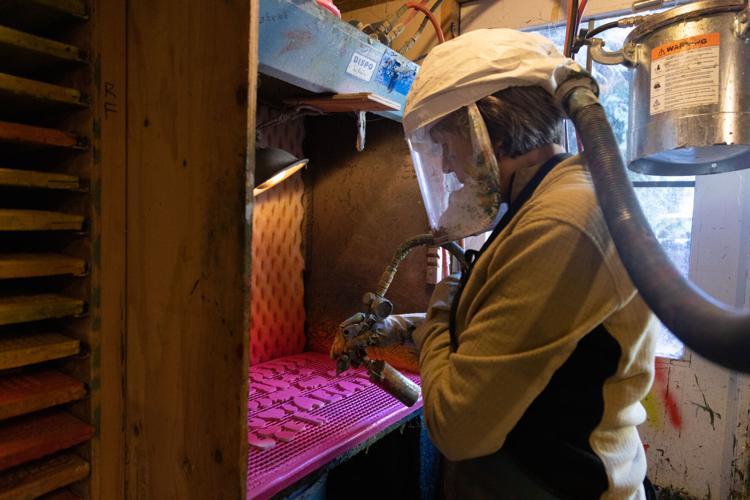 When the leaves start to drop, it’s time for the Corvallis Fall Festival, where more than 160 artists set up their work under pitched tents.

The event attracts artisans from all over the region, and even some as far as Arizona and Florida. But for artists Marvin Jack and his wife, Margaret Jack, it’s a chance to unpack their bags and share their work at home.

A place for locals

For 34 years, the Jacks have sold their handcrafted puzzles at the Corvallis Fall Festival. The pair toured all over the country to sell their work at different festivals. Kansas, Wyoming, Pennsylvania, Kentucky. They brought their kids with them and got to see many wonders, Marvin Jack said.

But the Fall Festival has a special space in their hearts. It’s their hometown show. And it feels more intimate. Most of the artists are Oregonians, many from Corvallis.

He believes Corvallis is a great place for artists for all kinds. At the Fall Festival there have always been potters, painters, jewelers and a variety of booths, he said.

“A real community is one that comes together and enjoys art, music and food together,” he said.

Sometimes they see people who grew up playing with their puzzles as kids and now have their own children, Margaret Jack said.

Their puzzles come in a variety of colors and shapes, from autumnal leaves to seascapes of ocean-dwelling creatures.

The couple started making puzzles for their children, and then as more people came to appreciate their craft, Margaret Jack, a former preschool teacher, and Marvin Jack, who studied children’s art in college, expanded their business.

Now they spend most of their time in their garage-turned-studio.

That studio is covered in paint. Little spatters of every color line the shelves, tables, doorknobs and even the artists themselves. Margaret Jack dons an apron covered in paint while hubby wears a splattered hoodie. Posters of past festivals line the wall; many depict previous years of the Corvallis Fall Festival.

“We’ve pretty much got it down to a science now,” Margaret Jack said.

Marvin Jack cuts the pieces of wood in their studio, and Margaret sands the pieces and applies a base layer of paint before they add the finishing touches together.

The work table is one their son designed. The round table has air blowing on it, which gives it the effect of a hockey table, he said. This allows for him to use less pressure as he moves the slab of wood around the thin blade.

“I’ll be a dying breed of this kind of puzzle-making,” Marvin Jack said. Many of the puzzle makers have switched to laser cutting rather than by hand, he added.

On the other side of the studio, Margaret Jack wears a mask attached to tubing that encircles the walls. It’s a connection to fresh air, she said, to protect her from the paint chemicals.

Rows of colorful trays line the wall as the puzzle pieces dry. A separate set of shelves holds completed puzzles.

Some of the puzzles depict trees, vegetables, woodland animals and personalized children’s names. Many of the designs used today are ones the pair created for their daughter in the '80s, Margaret Jack said.

Their booth at the Fall Festival was always close to the children's activities, something Marvin Jack is very passionate about, as board chair of the Art Discovery Zone.

This year they are launching a new collaborative project, he said. “Kids Create” will be a collaborative art piece where children can make their own mixed-media art piece that fits the ocean theme.

After the festival, their art will find different homes around the city of Corvallis, where the children will be able to visit them, he said.

“It’s important for kids to see themselves as part of the world,” he said. And art is a way to do that.

The festival will also have its own area for children to sell their artwork separate from the booths of adult artists, Marvin Jack said.

“It’s so important for all kids to be able to be creative and think creatively,” he said.

The Fall Festival has been an iconic Corvallis event for 49 years. But Executive Director Donele Pettit-Mieding feels there is now an appreciation for art perhaps more than ever.

“The past few years have taught us how much art is central to our quality of life,” Pettit-Mieding said.

She said the pandemic may have shifted people’s perspective on art and how to experience it.

“It brings us together; we gather to experience art, music and become connected,” she said. “Art makes us feel a greater human experience.”

Entertainment from two stages will take place throughout the weekend, including a performance on the main stage by The Macks, recently voted Portland’s Best New Band in a poll by Willamette Week.

There will also be a children's stage with puppet shows, an interactive drum circle, and a preview of the Majestic Theatre's musical “Elf.” Children will also get a chance to perform by signing up for the young performer showcase.

A free shuttle service to the festival will depart from Samaritan Square at 815 NW Ninth St. Further information is available at https://www.corvallisfallfestival.org.

Editor's note: a correction was made for the name of the event.

The audit is expected to take another one to three months to complete.

Marvin and Margaret Jack pose with a couple of their handmade puzzles in front of one of their drying racks at their Corvallis home.

Margaret Jack works on painting puzzle pieces in her home studio. She wears a mask that provides outside air for her to breathe.

Margaret Jack sets a tray of freshly painted puzzle pieces to dry in her home studio.