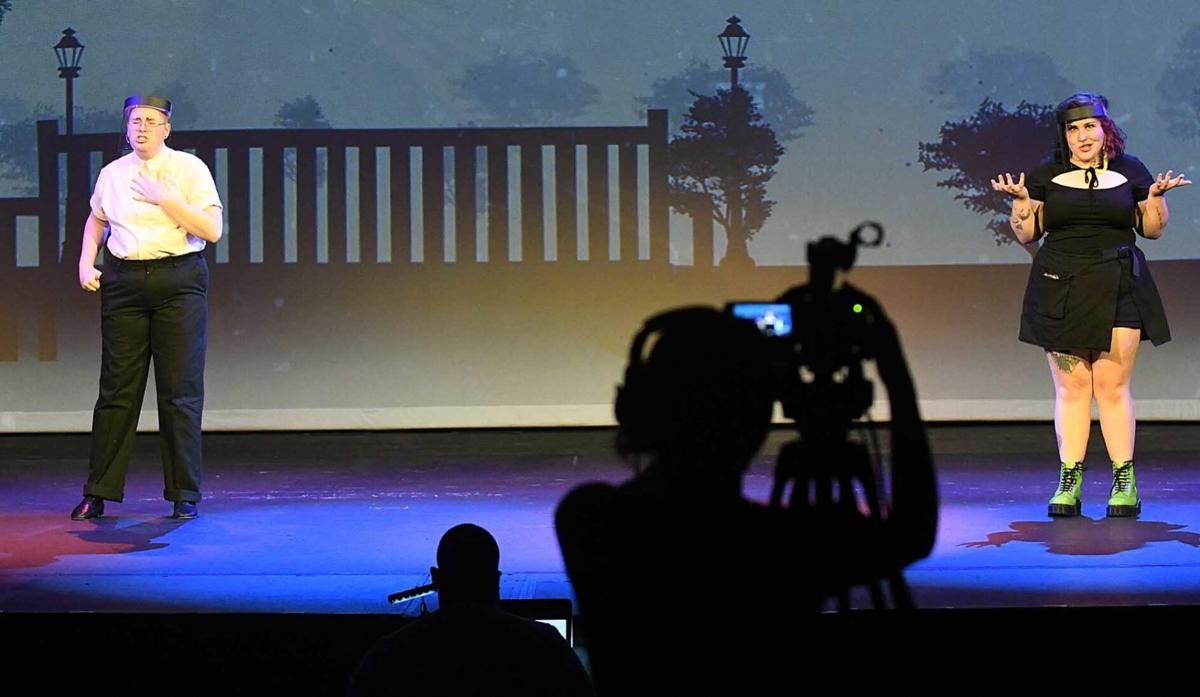 Nancy Long of Corvallis films and music director, Kent Wilson plays background music while "Stan," left, played by Drew May of Albany and "Pat," played by Kasper-Blaisse O'Neill of Albany, act out scenes from “I Love You, You’re Perfect, Now Change." 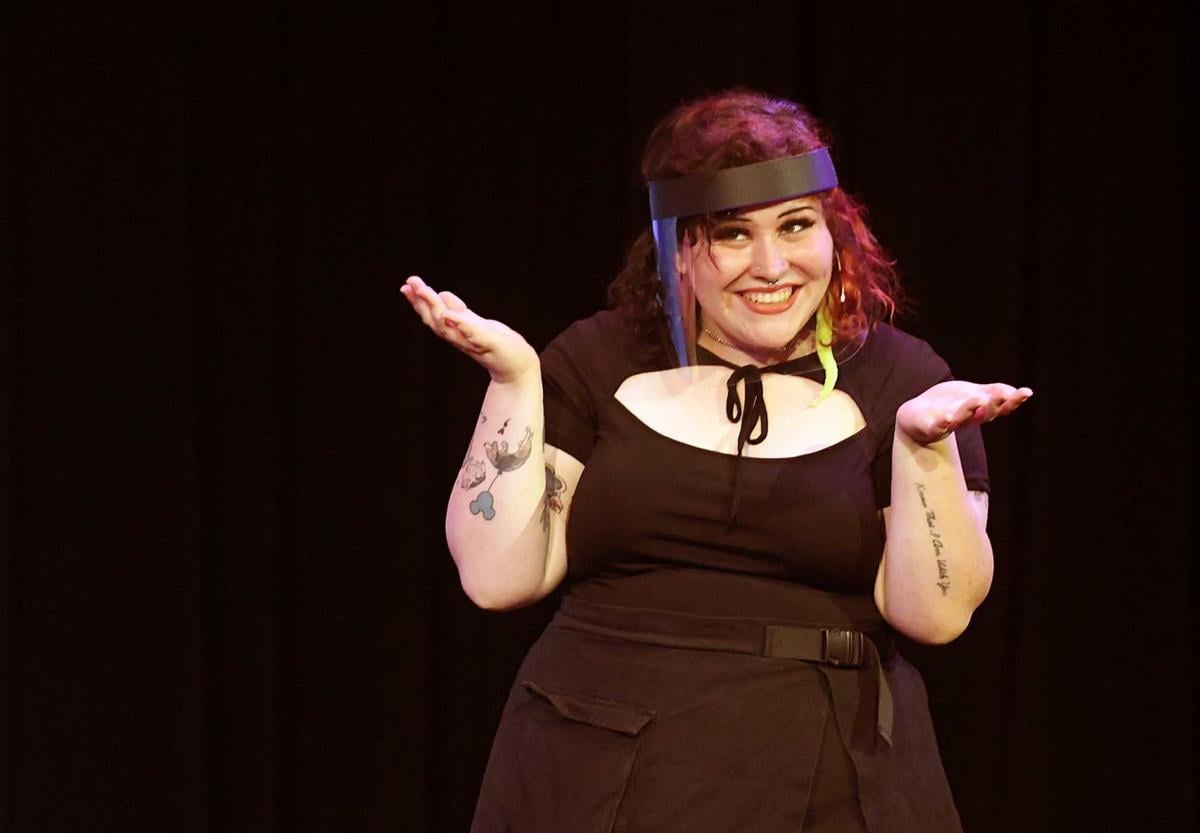 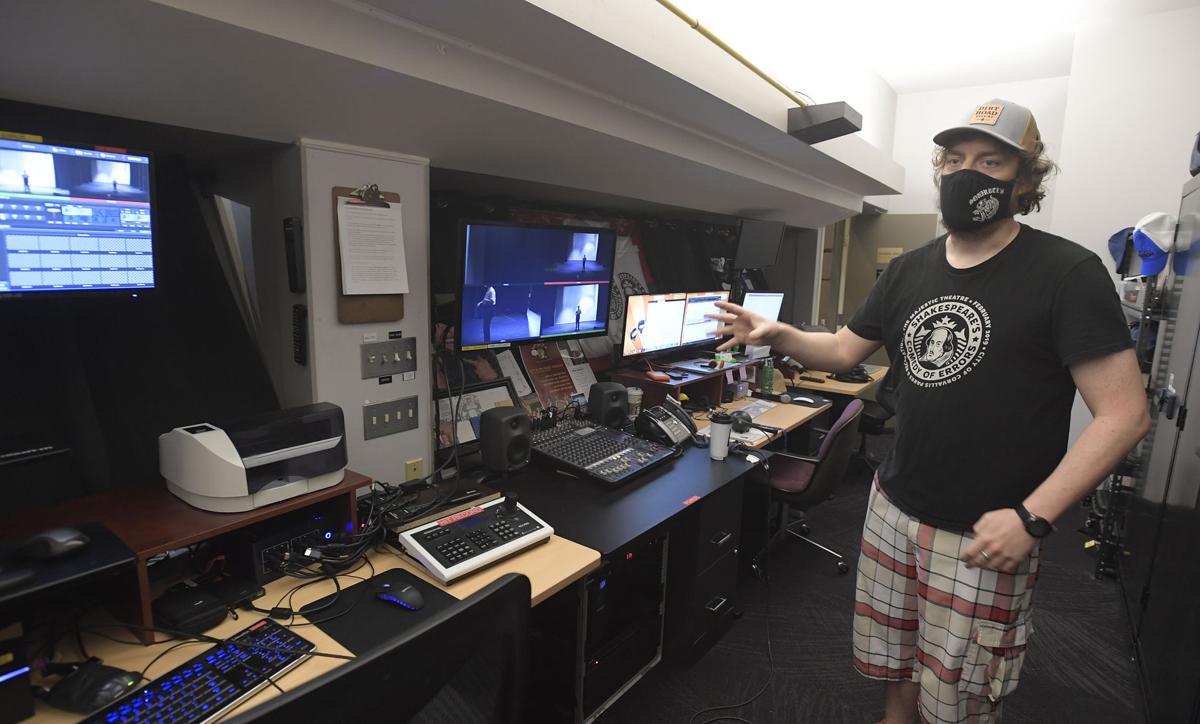 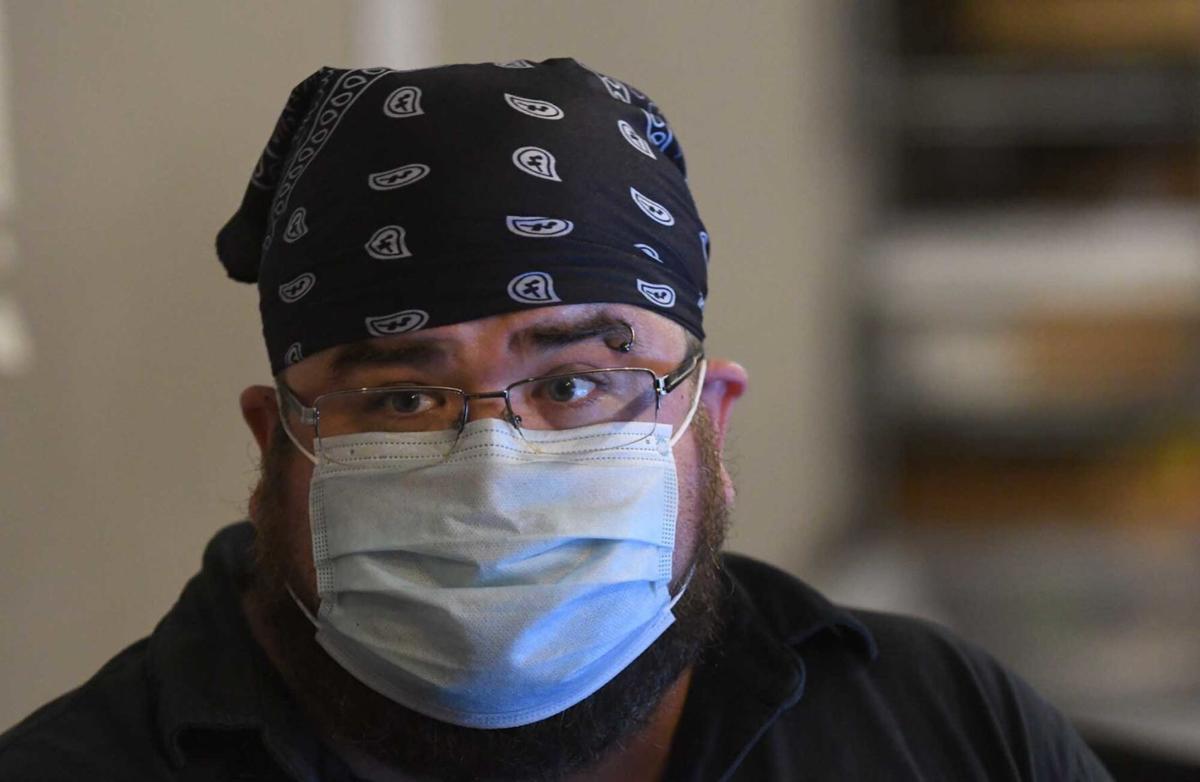 Majestic Theatre supervisor Jimbo Ivy has made sure social distancing is followed during the production.

Thanks to the global pandemic, the new face of dating is covered by a mask.

Which is sort of convenient, because that’s also the new face of stage performances.

The mid-valley isn’t to the point yet where community venues can return live local theater to regular audiences, but The Majestic Theatre in Corvallis has found a way to get a handful of actors back on stage.

“I Love You, You’re Perfect, Now Change,” a musical comedy told in a series of vignettes about love, dating, relationships, marriage and everything in between, will be available for online audiences at 7:30 p.m. Sept. 12.

The secret to staging the show: being very, very careful.

“We have this. This is the 6-foot stick,” said Jimbo Ivy, theatre supervisor, brandishing a tape-covered pole to show the distance actors on stage must keep from one another. “This is how you know if you’re 6 feet away from everyone, if you have this stick.”

And all the actors wear face shields onstage, which actually had some unexpected benefits, said Tim Kelley, who directs the show.

“With the mics, it makes it bounce off better,” he said. “It doesn’t negatively impact the sound. It was a nice surprise.”

Cast and crew did have to figure out how to make lighting, costumes and makeup work with the shields, but it didn’t take long, Kelley added. “You forget about them about two minutes into the show.”

Among the other adaptations: No onstage touching, not even for love scenes. Nobody is standing in the wings waiting to go on. In fact, while some of the 15 members of the ensemble cast might be sitting in assigned house seats or waiting in the lobby, some may not be in the building at all.

That’s because, although the actors are working on a stage, Majestic staffers are filming the production for online streaming on the website, www.majestic.org. For Kelley, that meant instead of running all of Act I, say, or the whole show from beginning to end, he could call only the actors he needed for particular scenes and record them until he liked the take.

It’s been a different experience for the actors, learning to play more to a camera than to a live audience and to riff on reactions given at a distance.

“Honestly, it has been kind of hard,” said Kasper-Blaisse O’Neill of Albany. “Not having an audience was the biggest thing for me. I’m so used to being able to feed off of an audience’s energy and using their laughter and applause to elevate my performance, so this was so different because we had to get that extra boost from ourselves.”

Logan Burt of Lebanon agreed, but added via email that everyone was so excited to be working again that it made the restrictions easier to bear.

“If we were not in the middle of a pandemic, yes, this show would look very different (and include a lot more physical contact), but that is not the show we get to make right now, and that's OK,” he said. “This is a show that has adapted and reflects this crazy time that we are living through.”

Kelley said part of the reason he chose the show was its adaptability. The musical first premiered off-Broadway in 1996, but has undergone some modern-day revisions that drew his attention.

+16 Gallery: Images from the Majestic's "I Love You, You're Perfect, Now Change"

Kelley’s characters include LGBTQ+ and nonbinary representation, for instance, which wouldn’t have been a part of the ‘96 era. “That’s a different spin that we wanted to do,” he said. “That representation was important to us.”

The Majestic began presenting online shows in April, shortly after Gov. Kate Brown asked businesses and organizations to shut down to avoid exposure to the novel coronavirus. Directors held auditions via remote and had performers use a program known as Zoom to “stage” the shows.

“I Love You, You’re Perfect, Now Change” is the venue’s first shot at a real stage production in months — and also its first request in months that audiences buy a ticket to watch.

Ticket prices are “Pick What You Pay,” with a suggested price of $10, $15 or $20, according to the website. A purchase gets the patron a special access link and password that will be active for both the show itself and for 24 hours after the listed start date and time. Proceeds go to pay for the rights to hold the show.

Cast and crew members promise it’s well worth the investment.

“I think the best part of this show is that it can be so relatable to everyone,” O’Neill said. “I myself relate to the whole struggles of awkward online dating, but there’s something in there for everyone.”

Added Burt: “This show is hilarious, and heartwarming, and sometimes a little sad, too. It focuses on relationships of all shapes and sizes, often showcasing the extremes of dating and marriage for hilarity's sake, but also inserting some very real and relatable moments and situations.”

It won’t be the last staged effort at The Majestic, which is working next on a reader’s theater production of “Dear Elizabeth” for Sept. 26, said Chad Howard, the video production technician. “We’re going to attempt to do one of these once a month.”

Burt said he plans to come back as often as he can.

“I would definitely do another show like this again,” he said. “In a perfect world, we could resume live theater, but we are not there yet. And while we're navigating this new world, this is the safest way to produce shows. If this is what it takes to do what we love and continue to bring theater to the masses, you can count me in.”

What: "I Love You, You're Perfect, Now Change," a musical comedy about dating, love and marriage, told through a series of vignettes.

Nancy Long of Corvallis films and music director, Kent Wilson plays background music while "Stan," left, played by Drew May of Albany and "Pat," played by Kasper-Blaisse O'Neill of Albany, act out scenes from “I Love You, You’re Perfect, Now Change."

Majestic Theatre supervisor Jimbo Ivy has made sure social distancing is followed during the production.